Saturday, December 4
You are at:Home»Features»Capitalising on her love for ‘taufufa’ 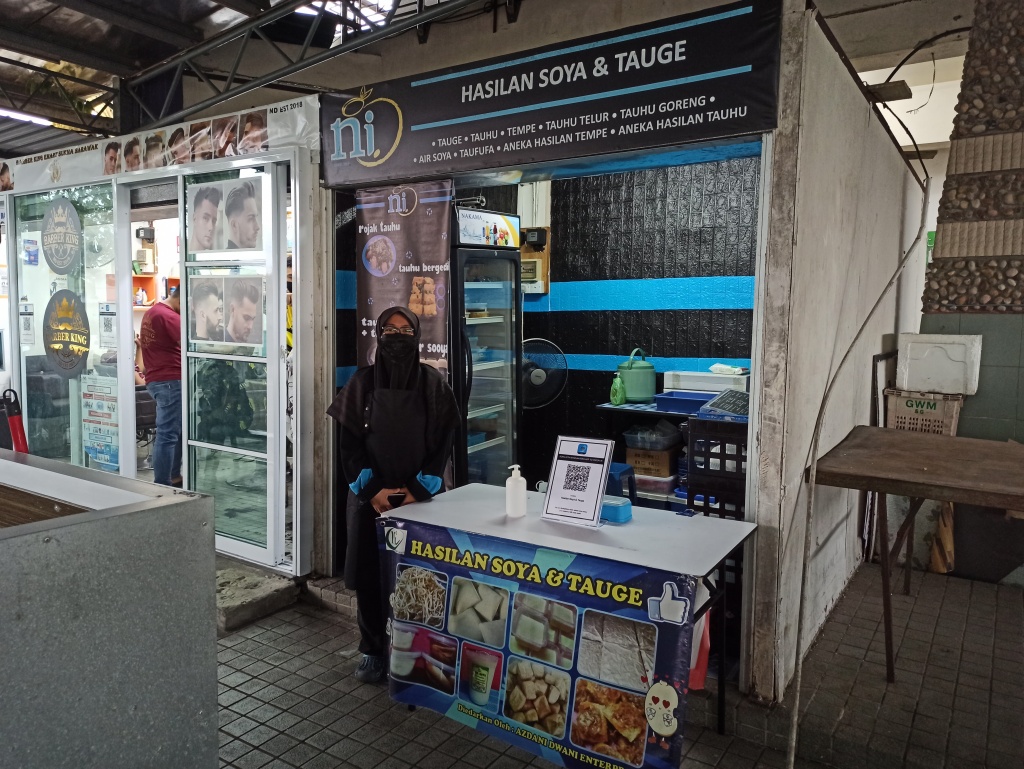 Azwani at her shop in Emart Express Sukma Ria in Kuching.

IT is not wrong to say that her penchant for ‘taufufa’ has led Azwani Jaini to become an entrepreneur that she is today.

The popular traditional Chinese tofu pudding has always been her favourite sweet treat, as well as her mother’s and aunt’s.

“You could say that I was kind of ‘being pushed’ into learning to make taufufa,” she told thesundaypost in Kuching.

“My aunt loved it – she still does – but back then, it was difficult to get any halal one. So she and my mother really encouraged me to learn about making taufufa.

“Mom even bought me a translated e-book that featured the recipe and the step-by-step guide,” she reminisced.

She did not complain, though, due to ‘her love for taufufa’.

It was 2011, and Azwani had just graduated from Universiti Islam Antarabangsa (UIA) with a Degree in Food Biotechnology.

“At the time, YouTube cooking tutorials were not as prevalent as they are today; those that were available did not feature taufufa, or much of other soybean-based recipes either.

“It was also hard to find tutors or classes specialising on this product,” said the Miri-born entrepreneur.

Not discouraged by this, she strove to pick up bits and pieces of information about making taufufa, which took quite a while before she felt that she ready to produce her first-ever batch.

However, that attempt was not a successful one.

“I used our rice cooking pot to set the hot soy milk, hoping that after a few hours it would set nicely into that rich, soft and silky beancurd.

“Alas, what turned out was an unsightly gelatinous mess.

“It was edible, though. Really, the taste was right – we emptied the pot that night,” she laughed.

It took her lots of practice to achieve the right consistency and throughout this ‘experimental period’, she had been making small batches just enough for her family’s weekly consumption.

In time, her taufufa continued to improve to a point where she felt confident enough to sell it.

“When I first started making it, it was only on a small scale, just for my family.

“But as my taufufa improved, I realised that there were not many Muslims selling this dessert in my hometown (Miri).

“I mean, they’re there, but we would only see them at Ramadan bazaars during the fasting month, and very seldom in other times.

“So I thought about it, and later, set up my home enterprise,” she said.

Azwani said the business started off quite well, with sales being generated by word of mouth.

“The majority of my customers in Miri are Muslims, and they feel reassured knowing that the products they buy are made by a fellow Muslim,” said the 34-year-old entrepreneur.

Replacement for ‘elixir of immortality’ 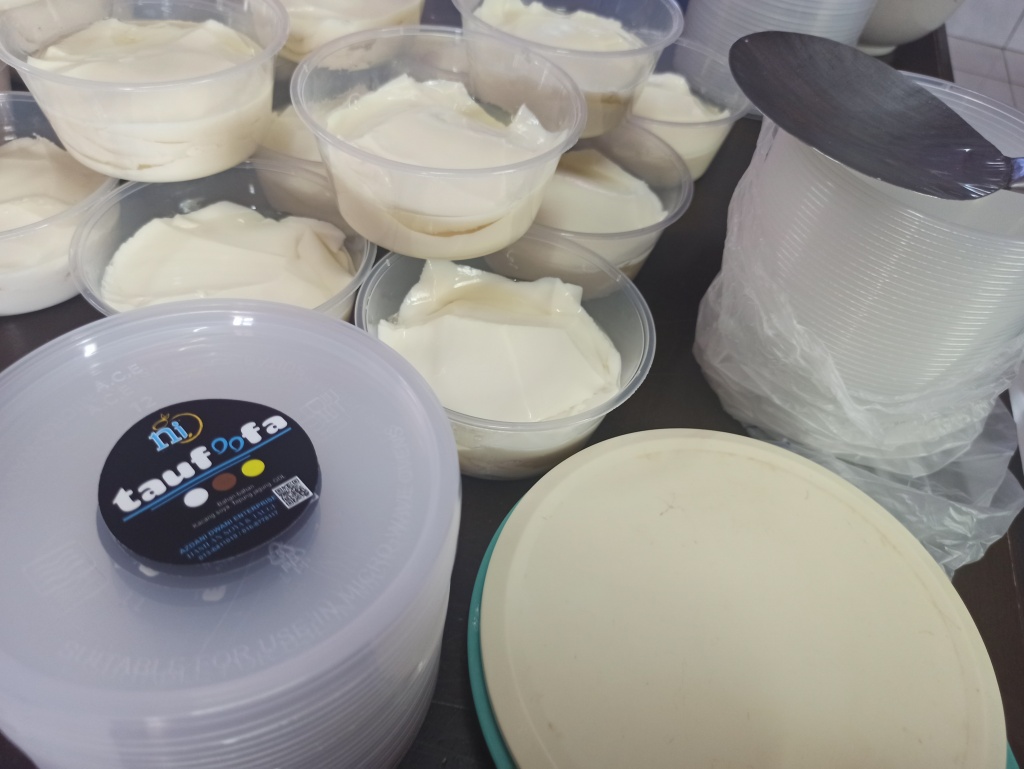 The one that started it all – the taufufa.

Also known as ‘douhua’, this delicate dessert shares the ancient link with tofu, which is believed to have been in existence in China for more than two millennia.

It is said that tofu originated in ancient China during the Han Dynasty, which was founded by Emperor Liu Bang.

There is an interesting tale regarding the origin. The emperor’s grandson, Liu An, was a very ambitious man who ‘journeyed across many lands to seek the secrets behind concocting the elixir of immortality’.

Throughout Liu An’s many attempts, he accidentally discovered that when soy milk came into contact with ‘a certain powder’, the liquid would coagulate and form a curd.

The emperor’s grandson really loved this ‘invention’ and brought it back home – abandoning the ‘elixir’ quest that he had initially set out for.

It is very likely that the ‘powder’ mentioned in the story is gypsum (calcium sulfate), which is widely used in the production of tofu.

As described by Azwani, making the beancurd with just the right texture requires lots of practice, but preparing a serving is a very straightforward process – fill a bowl with generous dollops of the tofu, pour in the syrup and it is ready to serve, either warm or chilled.

In Sarawak, it is served with brown sugar syrup or palm sugar, with the makers having their own recipes – some may add pandan leaves for fragrance, and some may infuse spices like ginkgo, cinnamon or liquorice into the mix.

Generally, many people regard taufufa as a sweet treat, but the way this dish is prepared is actually diverse, depending on which Chinese province it is from.

The one in Sarawak is said to have been derived from the Hokkien and Foochow variety, which uses brown sugar, but over in Peninsular Malaysia where there is a sizable Cantonese population, the syrup is clear as it is made with rock sugar and infused with ginger.

In Singapore, all Hokkien, Cantonese and Foochow versions are available.

Generally, Asean has a sweet tooth when it comes to taufufa — Indonesia’s ‘Kembang Tahu’ or ‘Tahwa’ is served warm or chilled in palm sugar syrup flavoured with pandan and ginger; in Thailand, the vendors offer a choice of ‘taohuai nom so’ (tofu in sweet milk), ‘taohuai fruit salad’, or ‘taohuai nam khing’ (tofu in hot ginger syrup); the Vietnamese version comprises the Northern Region’s jasmine-scented syrup, the Central Region’s sweet and gingery soup, and the Southern Region’s warm coconut water, with lychees; while in the Philippines, the ‘taho’ with its sweet brown syrup, is consumed as a beverage and sold by hawkers usually in the morning.

However, there are non-sweet varieties across China — in Northern China, it comes with soy sauce, with restaurants adding their signature accompaniments such as eggs, chopped meat, shrimp, pickles or mushrooms; in Sichuan, the spicy ‘douhua’ is flavoured with chilli oil and fiery peppers and at times, the dish comes with chopped scallions and nuts.

“I have seen many versions of taufufa; there are those with toppings like longans, preserved fruits and ‘cincau’ (grass jelly).

“Whatever it is, it’s an easy dish, and suitable for both the young and the old,” said Azwani.

From Miri to Kuching

Business was going well for Azwani in Miri, but she knew that she still needed to learn more.

As such, she put her home-based operations on hold in mid-May 2012 to undergo a Professional Halal Executive Certificate Programme at KFCH College in Puchong, Selangor.

She then underwent practical training at a soy sauce factory in Miri for three months before being absorbed by the company to work as a halal executive there, where she stayed on until September 2013 before resigning.

After that, she got married and relocated to Kuching, following her husband.

It was then when she bought a set of beansprout growing system, which reignited her interest in business.

“The beansprouts were growing so abundantly, people starting asking me if I made tofu as well,” she remembered.

In 2018, she registered her business, ‘Ni Hasilan Soya & Tauge’, which translates to ‘Ni’s Soy and Beansprouts Based Products’ – ‘Ni’ being the last syllable of her name.

From only 1kg in production back in Miri, Azwani now produces up to 12kg of tofu per day.

Not only that, she has also expanded her offerings to include other soy-based products such as soymilk, egg tofu, ‘tempe’ (fermented bean-cakes), ‘tauhu rojak’ (local savoury mixed salad), ‘begedil’ (patties) and ‘tauhu sumbat’, which are firm tofu pieces stuffed with meat and vegetables, and deep-fried like spring rolls.

The difference between ‘Ni Hasilan Soya & Tauge’ and her previous enterprise in Miri is now, she does everything from scratch – including soaking, cooking, grinding and pressing the soybeans to make soymilk and tofu. 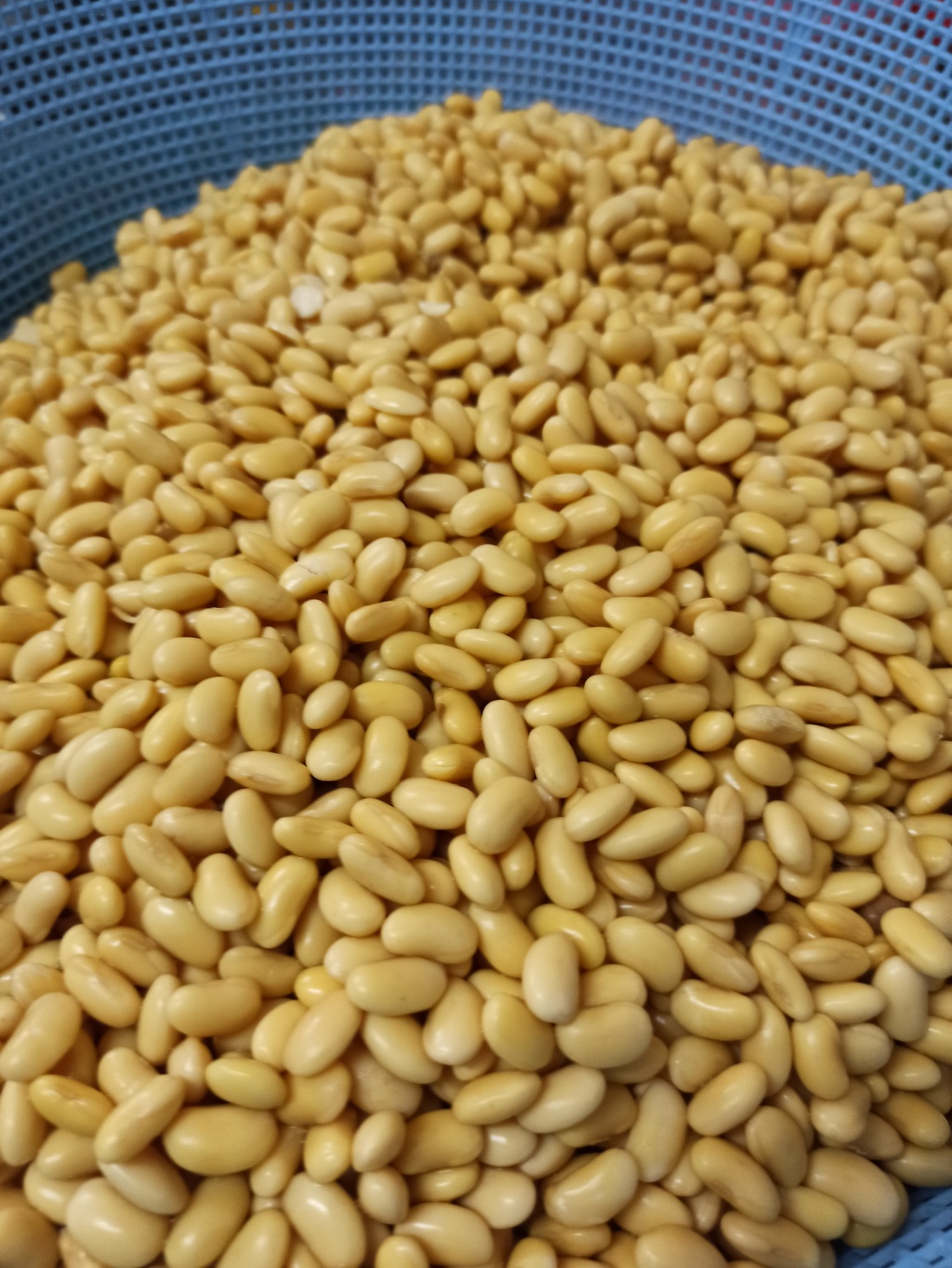 The soaked soybeans ready for the next process, which is grinding.

“Apart from the press machine, the other steps in the process are done by hand,” she said, adding that she would use up around 30kg of soybeans every week.

“Monday is my production day. I have been told that the raw soybeans that I buy every week, are imported from Canada, which makes sense as it is not exactly a key commodity in Malaysia,” she added. Azwani watches over the boiling process.

She has a one full-time assistant, but once in a while her husband Mohd Weldani Sidi, 35, who conducts Al-Quran classes, would come in and help.

Speaking on the benefits of consuming soy-based products, Azwani held on to the notion of everything having its pros and cons.

“Soybeans and their derivatives are nutritious, contain no bad cholesterol and are a good alternative source of protein apart from animals.

“However, those with joint problems should consume them in small amounts, while those suffering from gout are advised to only take them once in a while.

“There’s this old wives’ tale about drinking a lot of soymilk while pregnant would produce babies with fairer skin.

“Whatever it is, moderation is the key,” she said.

‘Making the best of a bad situation’

Like other traders, Azwani’s business was adversely affected by the Covid-19 pandemic, forcing her to halt all operations for the most parts of 2020 and 2021.

“My shop reopened in December 2020 after being closed since the MCO (Movement Control Order) took effect in March that year.

“Then, it shut down again for six weeks when the Delta variant reared its ugly head in August 2021,” she said.

Upon reopening her shop a few weeks after that, Azwani noticed that many of her customers were still hesitant to go out.

It was when she thought about setting up a delivery service using an existing ‘p-hailing’ (food delivery) platform.

“I have signed up with GrabFood; if the order came from a nearby area, I would deliver it personally or send it via Grab Express, which I must say is pricey due to high demand for the ‘right-up-to-the-doorstep’ service,” she added. 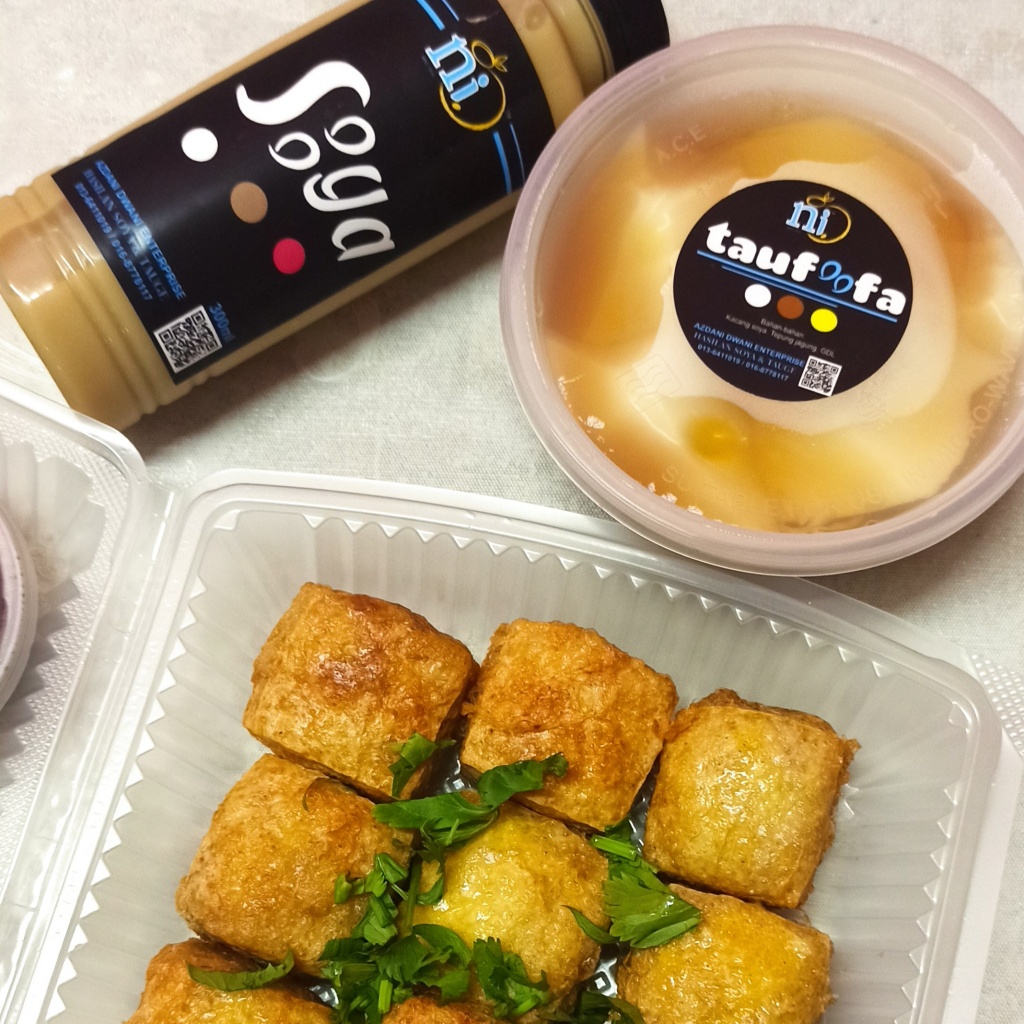 “The ‘bergedil’ is a huge hit. I sell them six pieces per pack.

“The demand is very encouraging – I make between 200 and 300 pieces every week.”

Even her favourite taufufa now has a colourful variation.

Azwani’s latest item on her menu – the ‘Taufufa Tiga Sudu’.

“The ‘Taufufa Tiga Sudu’ (Three-Spoon Taufufa) has three toppings, and the selection is based on customer’s choice. They can opt for the combination between sweetcorn, ‘cincau’, mango pudding, ‘kacang tumbuk’ (crushed roasted peanuts), or ‘biji selasih’ (basil seeds).

“Of course, there’s my regular taufufa either with sugar syrup or ‘gula apong’.”

For Azwani, as bad as the Covid-19 situation has been and still is, it is not an excuse for her to do nothing.

“There’s a silver lining in this. Many are stuck at home and thus, they would seek new food to try at home.

“This is where the ‘Hasilan Soya & Tauge’ Facebook page comes in, which is regularly updated.

“I have yet to have a child of my own, so this business is ‘the baby’ that I’m taking care of for now,” she smiled.