Saturday, December 3
You are at:Home»Sports»Athletics»55m target as discus queen aims higher and farther 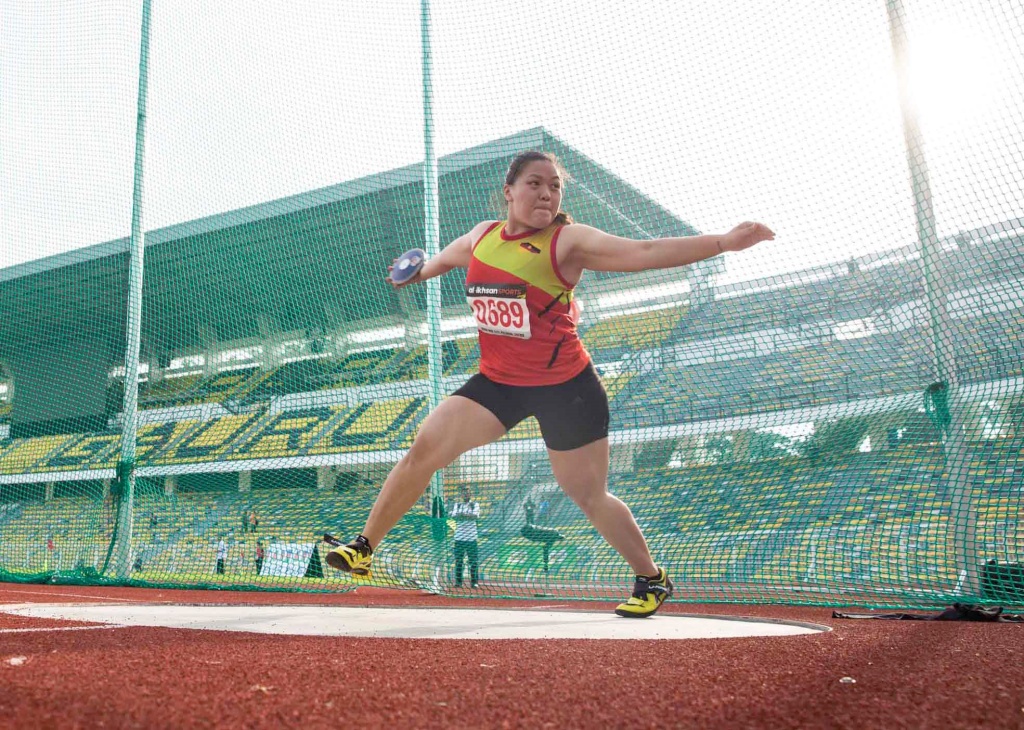 Queenie competes in the women’s discus during the 2018 Perak Sukma. She threw 43.77m to win the event for the third consecutive edition. — Bernama photo.

The then 13-year-old Sarawakian would not have imagined that she would fall in the love with the event and would one day become the national women’s discus throw record holder.

Yesterday, the Sarikei-born set a new milestone in the event after becoming the first Malaysian woman to surpass the 50-metre mark, hurling the disc to 50.67m (166′ 3″) at the Malaysian Track and Field Trials at the Bukit Jalil MSN Stadium.

Queenie, who will be turning 24 on Tuesday (Nov 16), improved by 2.11m her previous national record of 48.56m set at the Malaysian Grand Prix Athletics last April.

“I am really proud of myself and my team, because a lot of people said the women’s discus event in Malaysia didn’t have good results for a very long time.

“When we finally did it, we proved to ourselves that it is doable and that it was about time,” the 2019 SEA Games bronze medallist told Bernama when met during training at the National Sports Council yesterday.

Having achieved the 50m feat, Queenie Ting is now eyeing the 55m (180′ 5″) mark to qualify for the 2022 Hangzhou Asian Games on merit and is optimistic of achieving the goal by improving her strength, speed and nutrition.

“I will keep working hard for that, maybe it looks like far, but if we believe that we can do it and work hard for it, we can achieve it. I have to be focused, believe in my coach to give 100 per cent commitment and work harder.

“Though my biggest goal is to qualify to the Paris 2024 Olympics, but for now I will take a step at a time, focus on winning a SEA Games medal first, then try to qualify for the Commonwealth Games and Asiad. For now we have passed our first hurdle (50m mark), we have many more hurdles to face,” she added.

Meanwhile, her current coach Mohamad Ali Hamid explained that the short term plan is to continue her progress to reach the 55m mark by the 2022 Hanoi SEA Games next May, with the aim of returning with a silver medal.

“This is our first micro cycle and she has shown a good progress, we will have two more micro cycles next year, we will try to get another good news in the SEA Games, and based on the results, we will plan accordingly.

“If the results are very promising and significant for us, we will try to have a training stint in Europe after the SEA Games. Queenie has competed in the 2019 SEA Games, next is to compete in the Asian Games, maybe to be top 5 and be very competitive at the Asian level, before eyeing bigger tournaments,” he said.

At the Hanoi SEA Games, Queenie Ting will be up against reigning champion and two-time Olympian Subenrat Insaeng of Thailand, who claimed the 2019 edition gold with a Games record hurl of 60.33m.