Saturday, December 3
You are at:Home»Columns»Just another point of view»Unesco anoints Kuching with ‘Creative City’ of great cuisine status! 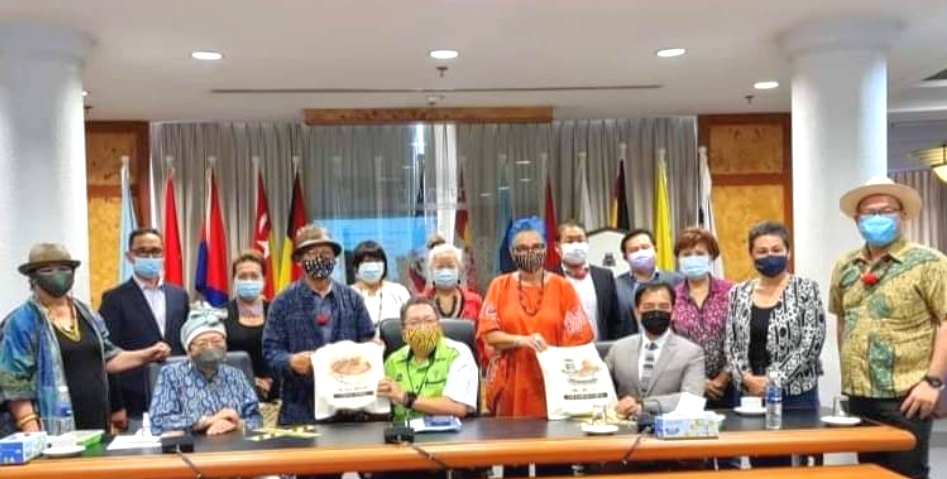 Prepping for the application in April 2021 – the team.

IT was a major confluence of the alignment of the stars that had gathered to visit upon Kuching city the accolade of being included and proclaimed as a Unesco’s Creative City in the field of gastronomy earlier this month!

Sarawak Tourism, Arts and Culture Minister Dato Sri Abdul Karim Rahman Hamzah said Kuching had successfully secured its proclamation in the Unesco’s network of cities recognised for its creativity in the field of gastronomy. Sarawak now has two Unesco prestigious status and recognitions – the other being the Mulu National Park in Miri, which is a Unesco World Heritage Site.

According to insiders, this was a hard-fought and well-earned honour, as it had so happened too that a couple of other cities in Malaysia had also wanted to apply for the recognition. One cannot but be reminded that popular and better known cuisines abound in cities like Penang, Melaka and Kota Kinabalu. However a well-prepared, superbly-organised and meticulously-planned campaign, which was assisted by the federal Tourism, Arts and Culture Ministry with the state counterparts, with several prominent local NGOs and organisations, had all come together to make a highly successful bid.

The Kuching South Mayor Dato Wee Hong Seng had earlier confided that there was quite a formidable challenge to be chosen to be the Malaysian city to carry the flag!

The Kuching South City Council (MBKS) and Kuching North City Hall (DBKU) were the main sponsors for the recognition, and the group of hardworking team had comprised the Ministry of Tourism, Arts and Culture, the city councils and local Sarawak stakeholders.

Datin Dona Drury Wee had led the Culinary Heritage & Arts Society Sarawak (CHASS), a broad coalition of stakeholders tasked with the promotion and preservation of the state’s gastronomic traditions, and the Society Atelier Sarawak led by Edric Ong, had initiated the project. Society Atelier had been successful in an earlier bid to list Kuching as a ‘World Craft City’ under Unesco’s World’s Craft Council.

The most immediate and instant benefits of such a status accorded by Unesco would mean that all parties who are involved in the promotion of tourism in Sarawak can now make use of the tag of ‘Kuching – A Unesco Creative City of the Culinary Arts’ or ‘Kuching – Where Amazing World-Class Cuisines Await You!’

No doubt the authorities and all the stakeholders would now be in the process of planning for many events in the near future as well as further down the road when the travel business will once more be as booming – after the clouds of the coronavirus has blown over.

There will, no doubt, be many specially-tailored inbound tours to show the tourists the bounty and abundance of our amazing and unique local cuisines, from the hawker stall foods to the ethnic dishes, to the more up-market superb fares to be had in the high-end eateries, bistros and fine-dining restaurants.

Indeed, I have noticed that even though we have been living under the Covid-19 cloud of restricted businesses with limited dining out and other forms of entertainment, in recent months there have been quite a noticeable number of new outlets opening up – specialised eateries of all kinds of cuisines, from the ordinary fare of the common breakfast fast foods to more fine-dining restaurants, especially in the newer-developed commercial areas like Saradise, Galacity and Kuching Metro, as well as at a handful of suburban regions further afield. 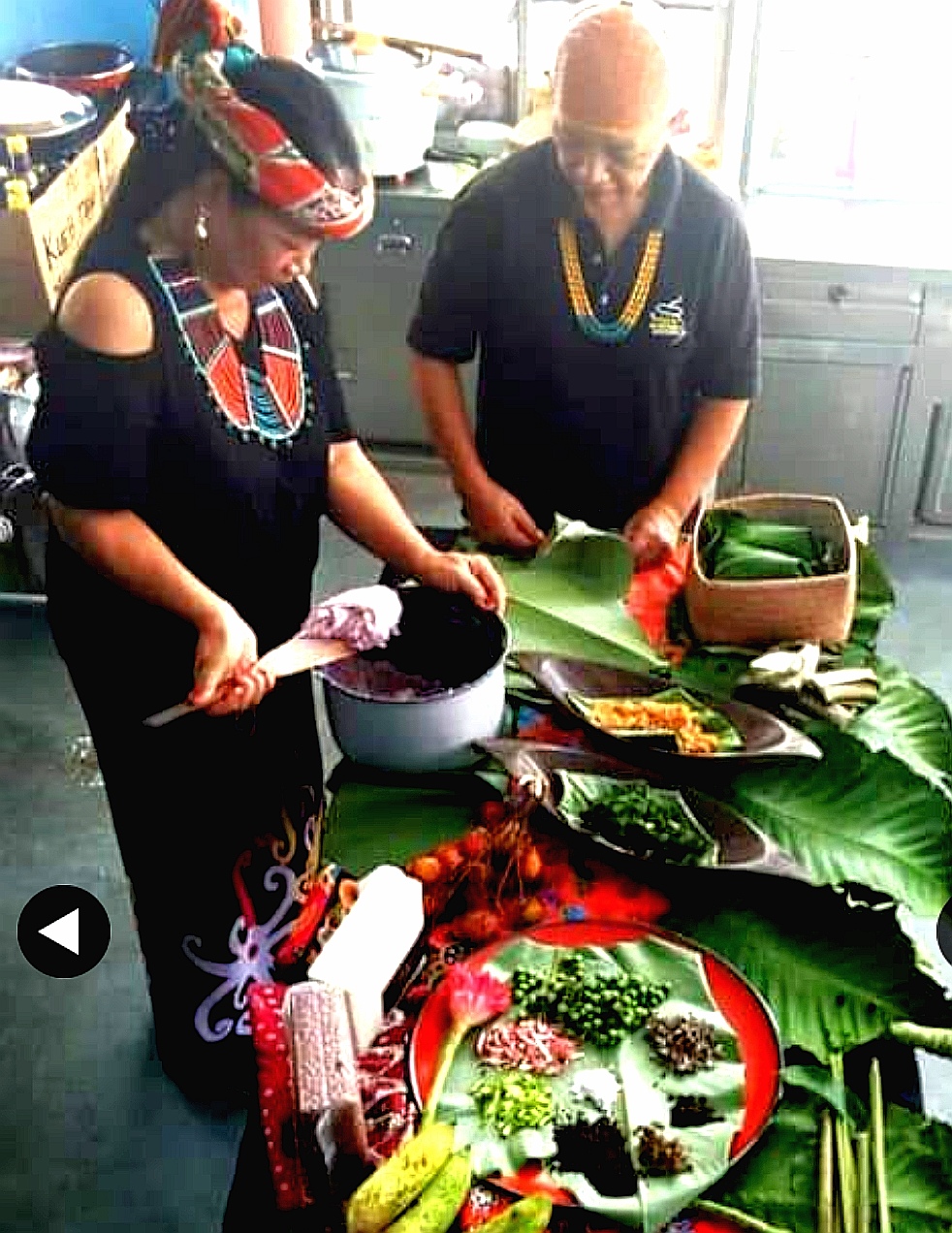 A variety of Highlands Kelabit cuisines prepared by Mina Trang and friend.

This goes to show that our young entrepreneurs today are inventive, adventurous and daring – they are willing to take risks, even under such currently dull and dire economic circumstances. There is a small but lively community of gourmands and food and drink connoisseurs who are independently well-off and not afraid to spend lavishly to enjoy good food and drink, and they are the folks who are directly supporting these newly-launched outlets throughout the city.

I would further comment that the variety of foods from all over the world as well as the number of different brands of wine, spirit and liquors available today in Kuching has reached a stage where it can rival the best in other bigger cities like Penang, Johor Baharu and Kota Kinabalu.

Well, maybe not quite yet up to Kuala Lumpur’s or Singapore’s, but I’m sure we’ll get there eventually.

Personally I’m also impressed with what’s being available in print and online as far as Sarawak culinary arts and cuisine have been concerned. In recent years, both publications known as Borneo Talk and KINO (founded by veteran writer Marian Chin) have published many special features, articles and write-ups, with a great many photographic spreads, on Sarawak food – ethnic, fusion and the unusual.

Now that we’ve been given this accolade by Unesco, probably it’s a good time for both these publishers (and others) to consider collating all such material that they have in their archives and put out dedicated special editions of Sarawak Foods!

That’d be quite the best-seller, I’d imagine! At the moment, there is a dearth of such materials and written literatures.

My friend Heidi Munan too has written a book called ‘Food Heritage of Sarawak – A Cultural Perspective’, which was launched in 2012, published by the National Heritage Department; it had featured food cultures of all the different ethnic groups in the state and had described at great details the ordinary everyday chores of finding and scouring for jungle produce, to preservation of the same to food related taboos as well as information on community functions and behavioural patterns.

Regina Fabiny’s Leisure Guide Publishing in Kuala Lumpur in 2016 had also published the definitive work called ‘The Guide to Sarawak’, a 420-page volume beautifully adorned with full colour photos printed on glossy art paper. In this volume, I had contributed a 21-page chapter called ‘The Flavours of Sarawak – A Culinary Experience’, which had an in-depth research on all the different cuisines available throughout the state, fully illustrated with photographs I took, as well as an annex of listings of where to find the best of each type of food mentioned.

(As it has been five years since its initial publication, there have been some changes since then, including a few businesses that are no longer in existence.)

I am very positive that the authorities, including the ministries, the councils, the local stakeholders and everyone involved in securing this latest and most prestigious accolade, will now do their best to use this tag to further promote tourism into Sarawak, as well as to ensure that the culinary arts here will continue to thrive and to grow, prosper, propagate and to live up to its name!

Congratulations to all those who were involved – all the very best to ensure its continued progress, success and a bon appétit to all, especially the future tourists making plans to visit Sarawak right now!