Thursday, January 27
You are at:Home»Features»Pioneering women’s involvement in politics 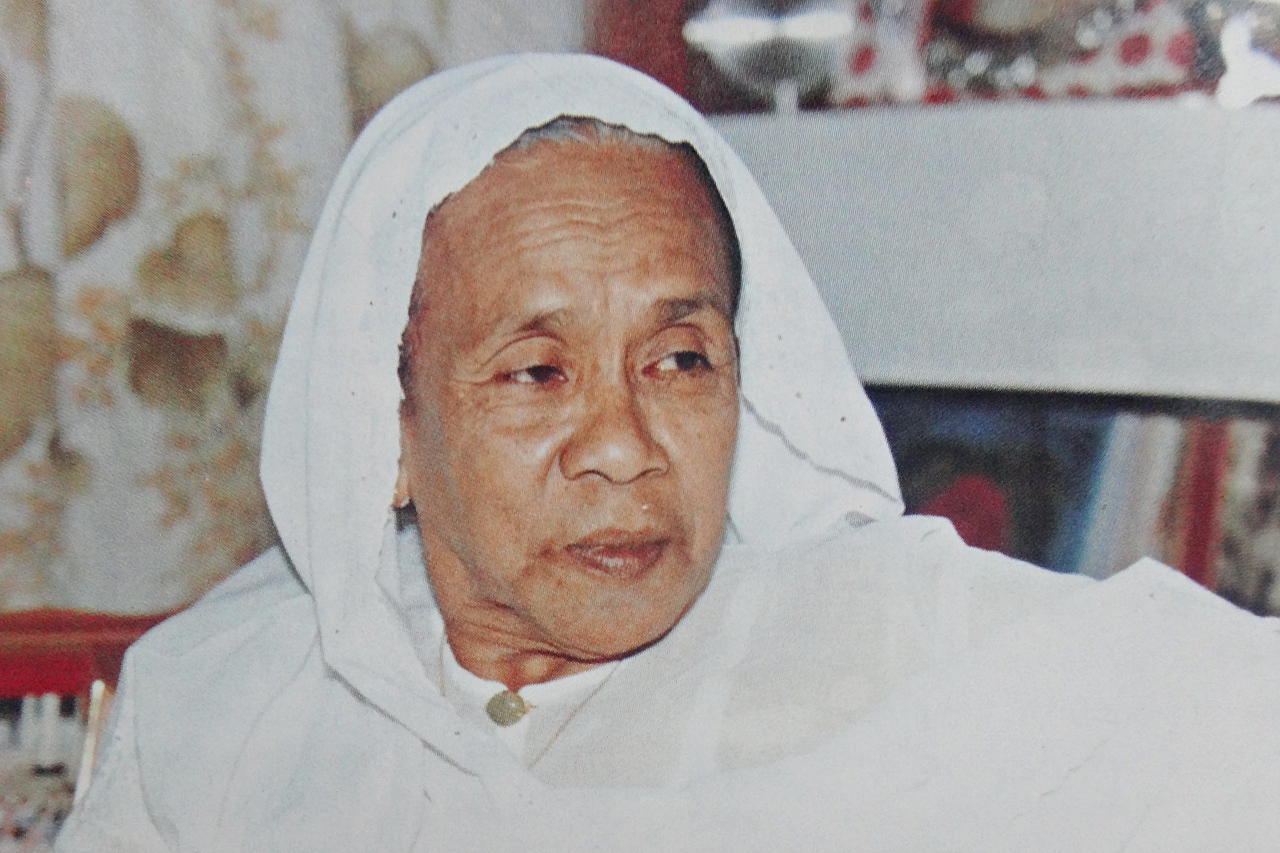 Mak Sitom’s narrative reminds us of Sarawak women’s early goals and difficulties, as well as what is now attainable

AFFECTIONATELY known as ‘Mak Sitom’, Datuk Paduka Jorkinah Hashim was one of the early pioneers who saw the potential of women of her time and went to great lengths to lay the groundwork to raise Malay women’s social consciousness, particularly in politics.

A widely respected Quran reading teacher and a well commended ‘bidan’ (traditional midwife), her charisma and influence ultimately led her into politics.

Despite coming from a humble background with limited formal education, her personal traits shone through and appealed to many Malay leaders of the time.

Her foray into politics in the early 1960s was largely influenced by Datu Bandar Abang Haji Mustapha, an influential Malay leader who was the prime mover behind the formation of Parti Negara Sarawak (PANAS) in 1960.

It was the latter who personally recommended her to join the political party where she became a founding member.

At 47, her competence as an influential speaker stood out. By the time PANAS reached its first year, she had won over a significant number of Malays to the party with women forming the majority.

Her interest in politics grew as a natural part of herself. Known for her dedication and loyalty to the party, she was held in high esteem by those in the political circle.

It was not easy for a woman to carve out a leading role in politics in her day, but she demonstrated differently.

She was respected for her foresight and ability to guide and motivate members to stay the course of the party’s battle and agenda.
She was confident and vocal.

‘Mother of the party’

Affectionately regarded as ‘the mother of the party’, Jorkinah was later known as ‘Mak Sitom’. It was Tun Pehin Sri Abdul Taib Mahmud, the former chief minister and now the Yang di-Pertua Negeri Sarawak, who first called her by the affectionate name.

The name had since remained a widely regarded icon in the political circle.

A rare breed in her time, Mak Sitom was a daughter of a Hakka from China, who embraced Islam and took the name Hashim Abdullah when he married her mother, Normah Abok, a Malay lass from Kampung Nombor 5, Sungai Lazim in Kuching.

Hashim worked at the Bau gold mine when he got married but later, he and his young family moved to Sibu, where Mak Sitom grew up.

When the family moved back to Sungai Lazim in Kuching, Hashim became known as an exponent in the art of self-defence and hailed as ‘orang kuat’ (strong man) by the Malay community in the area.

In many ways, Mak Sitom was like her father – astute, bold and courageous.

Married to Berdah Gani, an industrious Malay man from Bau, Mak Sitom had three daughters and a son. Berdah had worked as a daily-paid ship member with the Sarawak Steamship Company. He resigned from the company after securing a more stable job at a lemonade factory. His salary was meagre, but with Mak Sitom’s Quran reading classes, and expertise as a well-sought after ‘bidan’, the couple was able to make a good living for the family. 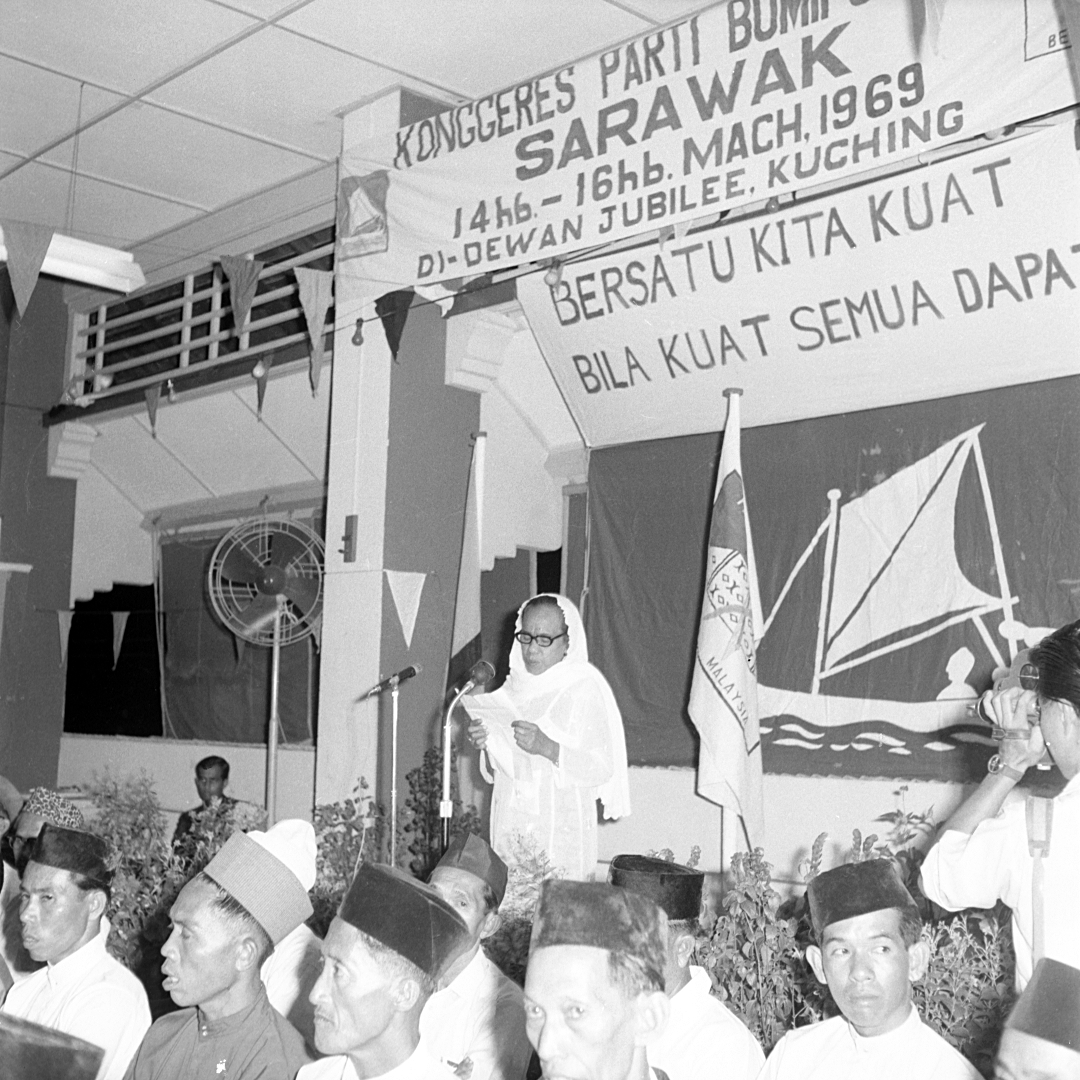 The gifted Quran teacher taught with strict discipline. Many of the young learners feared her for her disciplinarian style, but they also loved her because she taught with dedication and commitment.

Likewise, Mak Sitom was no ordinary ‘bidan’. Whether she was delivering babies or providing traditional massage for expectant mothers and women in confinement, she took time to sit with them as the women engaged in meaningful conversations.

She spoke with such charisma that she held the attention of her listeners and she was never short of topics to share. All this augured well for her future involvement in politics.

A mother of four grown-up children in her late 40s when she first joined politics, Mak Sitom received unwavering support from her close-knit family, especially her husband. What defined her political success was not material, but rather the discipline of hard work, a capacity to struggle in the face of adversity and importantly, the support she gained from her family members.

Led by (Tun) Tuanku Bujang Tuanku Othman, one of the founding members of the party was Datuk Ajibah Abol, who was then vice-president of Sarawak Malay National Union (MNU) and a former anti-cession activist.

In 1966, Mak Sitom and Ajibah played a key role in bringing PANAS and BARJASA together to form Parti Bumiputera. Later, in 1973, the party merged with Parti Pesaka Anak Sarawak (PESAKA) and became known as Parti Pesaka Bumiputera Bersatu (PBB).

For a woman to command respect during the rise of political awakening in Sarawak, Mak Sitom epitomised the early pioneering spirit of women in politics.

The proposal to form the Federation of Malaysia had been put forward by then-prime minister of Malaya, Tunku Abdul Rahman Putra, in May 1961. Initially, the Malaysia Plan met with protests from the various ethnic groups who wanted independence for Sarawak.

In response, Britain appointed a commission of enquiry, known as the Cobbold Commission, to ascertain the views of the people of Sarawak and also Sabah regarding the formation of Malaysia. The commission, led by Lord Cobbold, was given a warm reception when they arrived in Kuching on Feb 19, 1962.

As a leader, Mak Sitom arranged for the participation of many women mainly from her party in welcoming the guests. Earlier on, she had explained to the womenfolk on the Malaysia Plan and reminded them in earnest to exercise their right wisely in deciding the future of their country. She was also among the representatives who met with the commission to express their views on the proposed federation.

According to the findings of the commission, about a third of the people in Sarawak supported the Malaysia Plan, a third agreed to the Plan with conditions, while another third opposed. 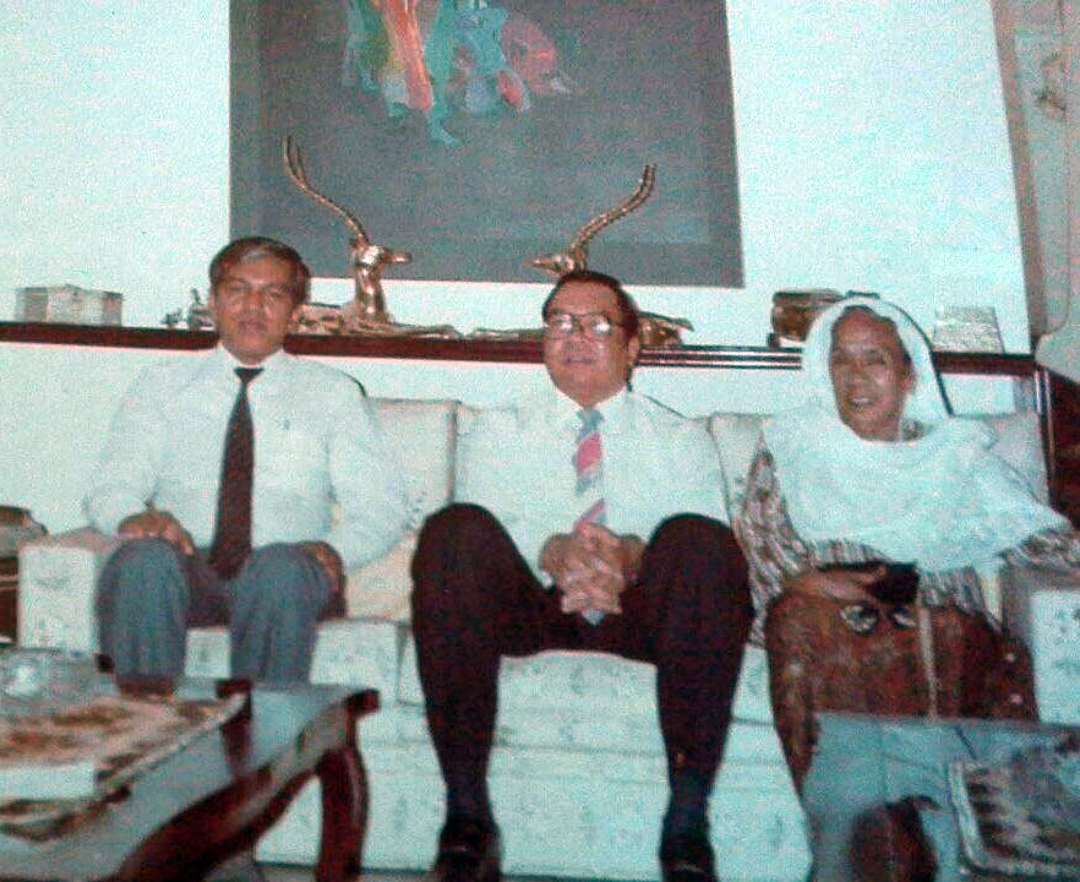 Mak Sitom with Datuk Abang Abu Bakar (centre), the son of Datu Bandar Abang Mustapha, an influential Malay leader who personally recommended her to join his political party where she became a founding member.

For the love of her people and country

Mak Sitom’s commitment to her party work had developed in her the confidence and courage to stand for the truth for the love of her people and country. Giving up was not part of her language. Coming from a humble background and not having much formal education, she learned by reading political literatures published in ‘Jawi’ (Malay words written using Arabic alphabets) and interacting with people from all walks of life.

Notwithstanding the humble state of her house at Sungai Lazim, many party activities, including important meetings were held there. As were most of the politicians in her day, often she would dig from her own purse to fund the activities.

“When we give to the party, do not expect anything in return. Just do it,” she emphasised.

Mak Sitom was bent on helping women realise their potentials and improve their living standards. Most of the women did not have formal education as their parents were bound to the common traditional belief that a girl’s place was in the kitchen. This was compounded by the poor infrastructure, the lack of schools and the poor socio-economic conditions.

Whenever she campaigned for the party from house to house, she would urge the parents not to deprive their daughters of formal education. She also encouraged the women to attend the literacy and Home Science classes provided by the women’s groups in their villages. She asked them to make the best use of the opportunities that they had for the upliftment of their community.

Even as she sat with the womenfolk during weddings and funerals, she never failed to instil the same message in her listeners. The woman patriot was outspoken about her views on important issues and would not compromise her stance in the interest of the people.

As the party’s ambassador, Mak Sitom did not disappoint. Having struggled and braved the odds since the party’s early formative years till the time when it merged with BERJASA to form Parti Bumiputera and later, united with PESAKA to form what is today PBB, she remained loyal to the party until she succumbed to stomach cancer on July 3, 1989, at age 74. 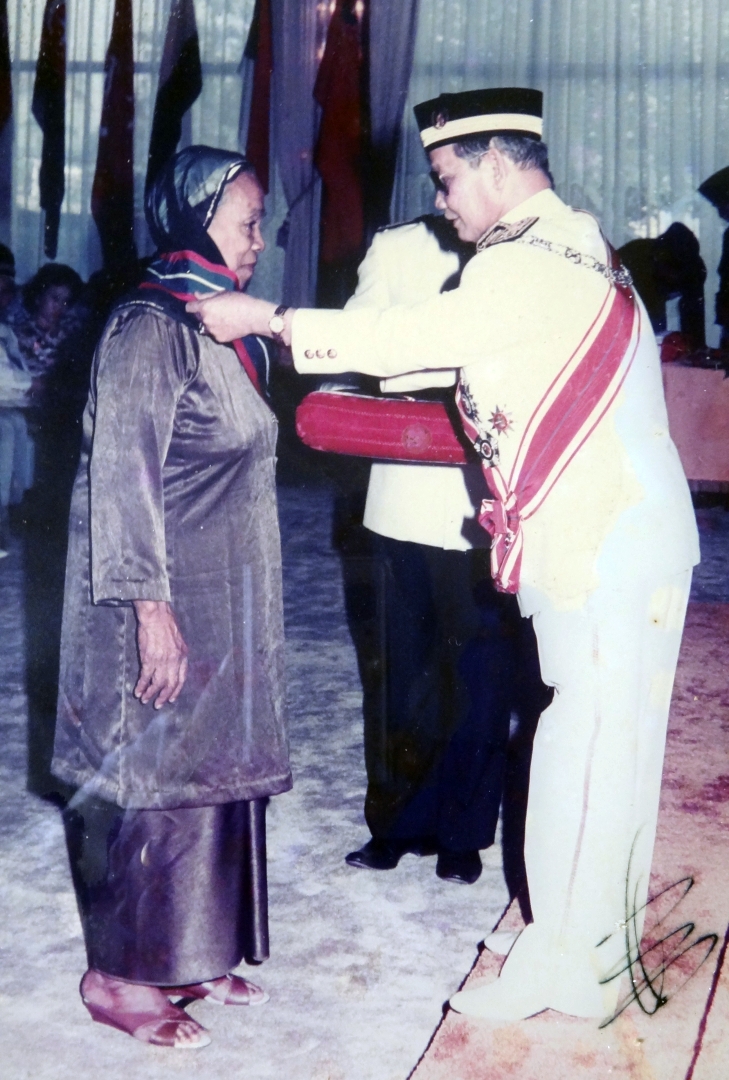 Mak Sitom accepting her Datukship from then-Governor of Sarawak.

Mak Sitom was Advisor to the PBB Women during the last few years of her life. In recognition of her vast contribution, she was awarded the Johan Bintang Sarawak (JBS), Ahli Bintang Sarawak (ABS), Sijil Kehormatan Negeri (SKN) and the Darjah Utama Bintang Kenyalang, respectively, by the state government.

A street near Jalan Haji Bolhassan in Kuching was named ‘Lorong Sitom’ in honour of her.

Mak Sitom grew up in a time when social amenities were few and where there were hardly any women of experience and higher education who could provide motivation, guidance and encouragement; women who could be described as role models and be depended on for direction and support for other women to pursue their ambition – let alone to promote their role in politics.

Mak Sitom was one of the early pioneers who saw the potential of women of her time and went to great lengths to lay the groundwork and launch activities that raised Malay women’s social consciousness, particularly in politics. Her narrative reminds us of Sarawak women’s early goals and difficulties, as well as what is now attainable.