Saturday, January 29
You are at:Home»News»Sarawak»Chong: Door not 100 pct closed for DAP Sarawak to work with PSB in state election 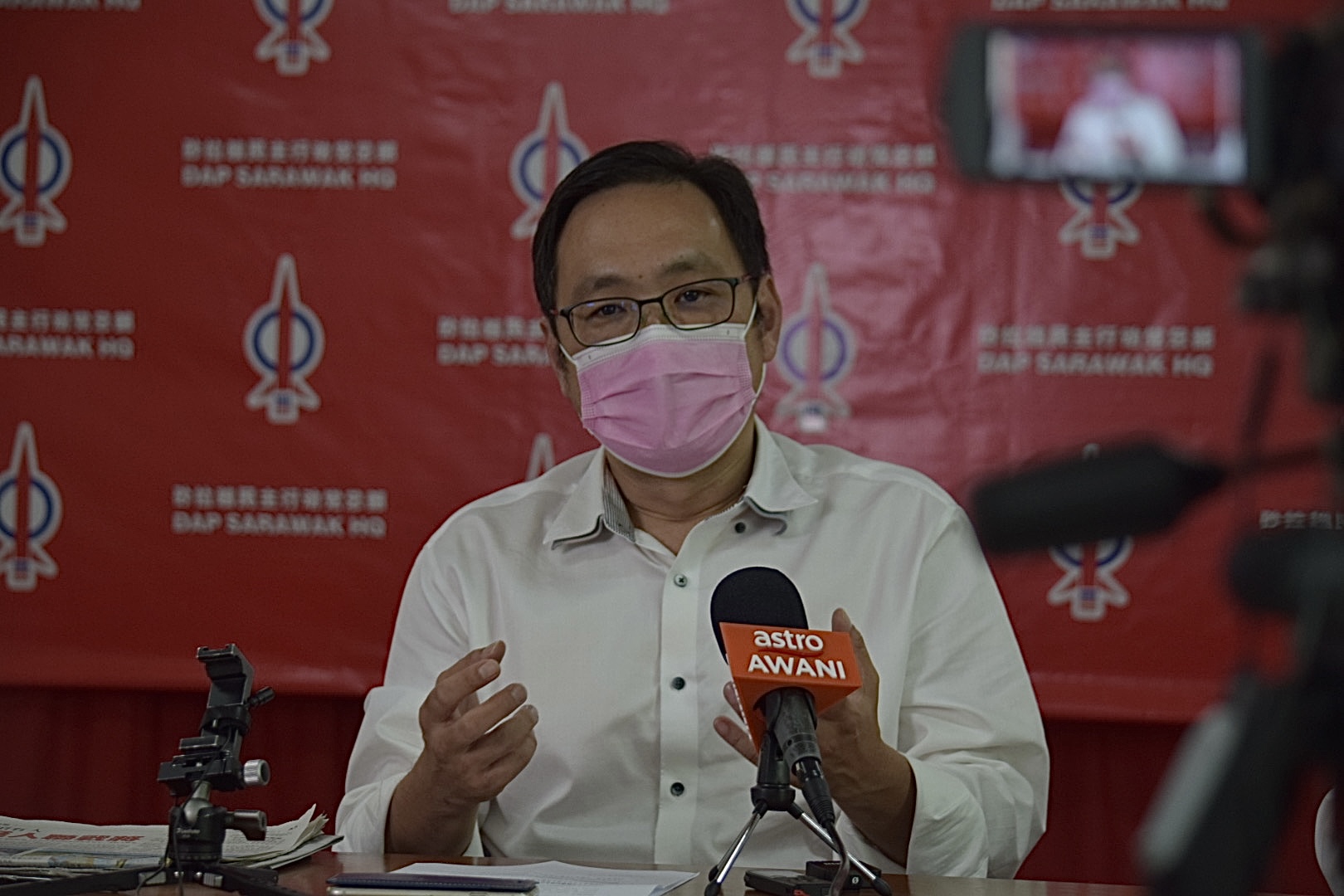 Chong speaking during the press conference. – Photo by Roystein Emmor

He said he does not rule out working together with PSB so long as the party is a “genuine opposition.”

“I will not say affirmatively that there will be a collaboration (with PSB) but there are concerns and the concerns are very real.

“We want to work with genuine opposition,” he told a press conference at DAP Sarawak headquarters here today.

He explained that by genuine opposition, this meant that those who join opposition parties are not ones to easily jump ship from the moment they win in the election.

“During the election season, a lot of potential candidates will start mushrooming and coming out to speak on behalf of the people. I think they were nowhere to be seen during the off-peak election period.

“Unlike DAP, which is a very established trusted brand, our 42 MPs, not a single one jumped ship and we solidly hold on to our pledges to our voters.

“That is why we say we want to cooperate with genuine opposition members who can persevere despite all the persecution by the ruling government,” said the Stampin MP.

Chong, who is also Kota Sentosa incumbent, said with regards to working with PSB, there must be some concessions made in any seat negotiations.

“This will bring us back to the same scenario where there is a lopsided imbalance of opposition in the party. What we need is a very strong opposition in Sarawak if not to change the government,” he said.

He also said that before any agreement can be reached with PSB, a lot of factors would have to be taken into consideration.

“These include whether the person who has been elected will jump ship or not after the state election and whether candidates proposed by PSB were opportunists or had track records where they really fight on the opposition stage.

“As such, we need a thorough discussion before we make the decision and after that, be it right or wrong, we have to live with it and face the consequences caused by the decision we made,” he said.

On a related matter, Chong stressed that DAP has made it very clear that the party rejects all political ‘frogs’.

“As far as DAP is concerned, in our areas, we had a ‘frog’ who was an incumbent and we insisted that he should not be renominated. That is how we uphold our principle and party decision,” he said.

He pointed out that all PSB incumbents for the coming state election were party hoppers.

“I think all PSB (incumbent) candidates at one point of time have hopped from one party to another and because of that there’s no cooperation whatsoever,” he said.

However, he said when it comes to politics there should be some flexibility when making decisions.

“We want to see among those ‘hoppers’ in PSB whether there’s a possibility of them winning and jumping ship or they stay on as opposition.

“This is why I won’t say 100 per cent sure the door (with PSB) is closed and I’m not saying that we 100 per cent won’t have any cooperation,” he said.

Chong admitted that this process would have been better if the negotiations were carried out earlier.

“But sometimes, it is only when it is very close (to the election) that people are willing to engage in hard talk and hard negotiations,” he said.