Saturday, December 4
You are at:Home»News»Sarawak»First of 5 private international schools to start operation next March 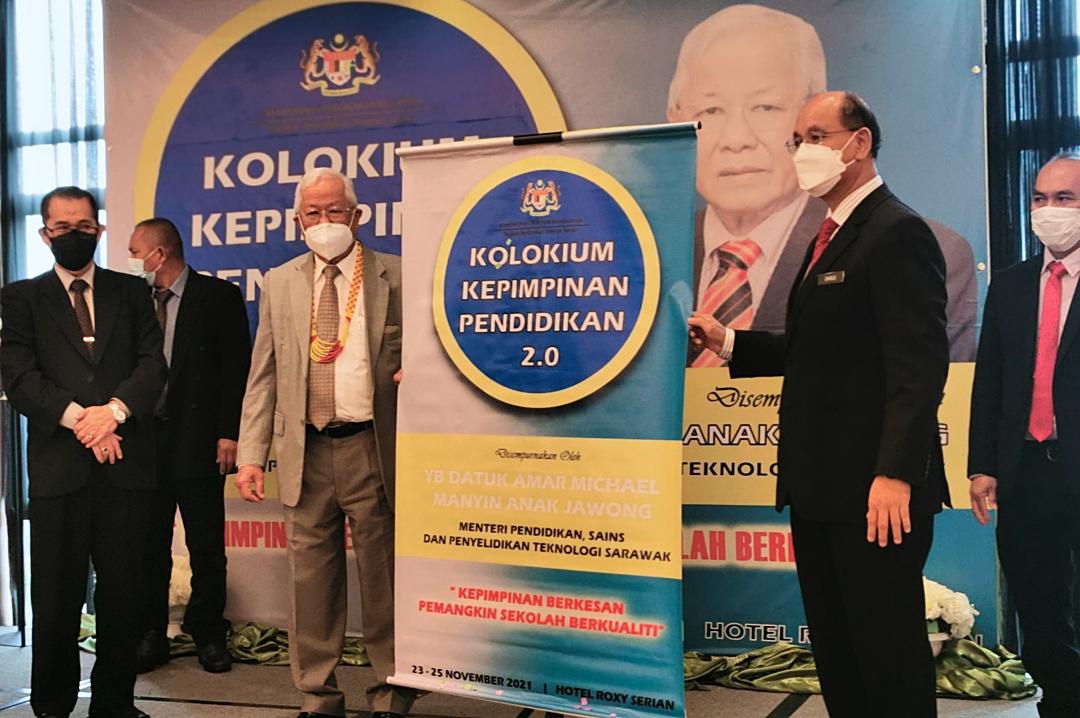 Manyin (third left) unveils the bunting for the colloquium as the launch gimmick. Also in the photo are Abang Hut (first left) and Charli (second right).

He told reporters here yesterday this school is sited at the Tunku Putra School premises in Petra Jaya which had been bought over by the state government.

He said the state government has already bought licences for these schools, which means that they can now recruit teachers and enrol students.

“We are taking over from Tunku Putra School premises in Petra Jaya (for the first school). So, the next one will be at Mile 12 Kuching-Serian Road which is under construction, and after that will be Sibu, Bintulu and Miri.

“Each of them will have 500 students when fully operational. All these schools will be offering syallabus developed by University of Cambridge,” he said when met by reporters after he officiated at the Serian Education Leadership Colloquium here yesterday.

Manyin also said all these five private international schools planned by the state government will be run by Yayasan Sarawak.

“Since these schools will be offering (English language-based) Cambridge syllabus, the students will be sitting for International General Certificate of Secondary Education (IGCSE) in Form 5 conducted by Cambridge.

“We have gone to Cambridge (for this purpose). Of course, we have to pay for it,” he said.

Earlier, Manyin in his speech called on the headmasters and principals attending the colloquium to help identify potential students to be enrolled at these international schools.

“We need the headmasters to recommend the potential students. Once selected, they will follow the Cambridge syllabus and sit for the IGCSE. That is a privilege for Sarawak,” he said.

It had been reported previously that fees for students enrolled to these schools will be subsidised by the government including full subsidy for those coming from B40 families.

Manyin also advised the attendees to focus on effective leadership and efficient management in order to uplift the management of their schools.

He said the headmasters and principals are faced with challenges in running their schools such as dilapidated condition of the building and lack of proper road access to their schools.

He also said the high turnover of teachers, who ask for transfers after just few years, is another tough challenge especially for schools in rural and interior areas.

“As headmasters and principal, how are you going to tackle such challenges in order to improve results of your schools? There is also gap between urban and rural schools (in terms of facilities and amenities) which is another challenge,” he said.

The three-day colloquium which started yesterday was organised by the Education District Office of Serian and participated by 80 headmasters and principals.