Thursday, January 20
You are at:Home»News»Nation»Gov’t to continue with micro, affordable franchise development programmes 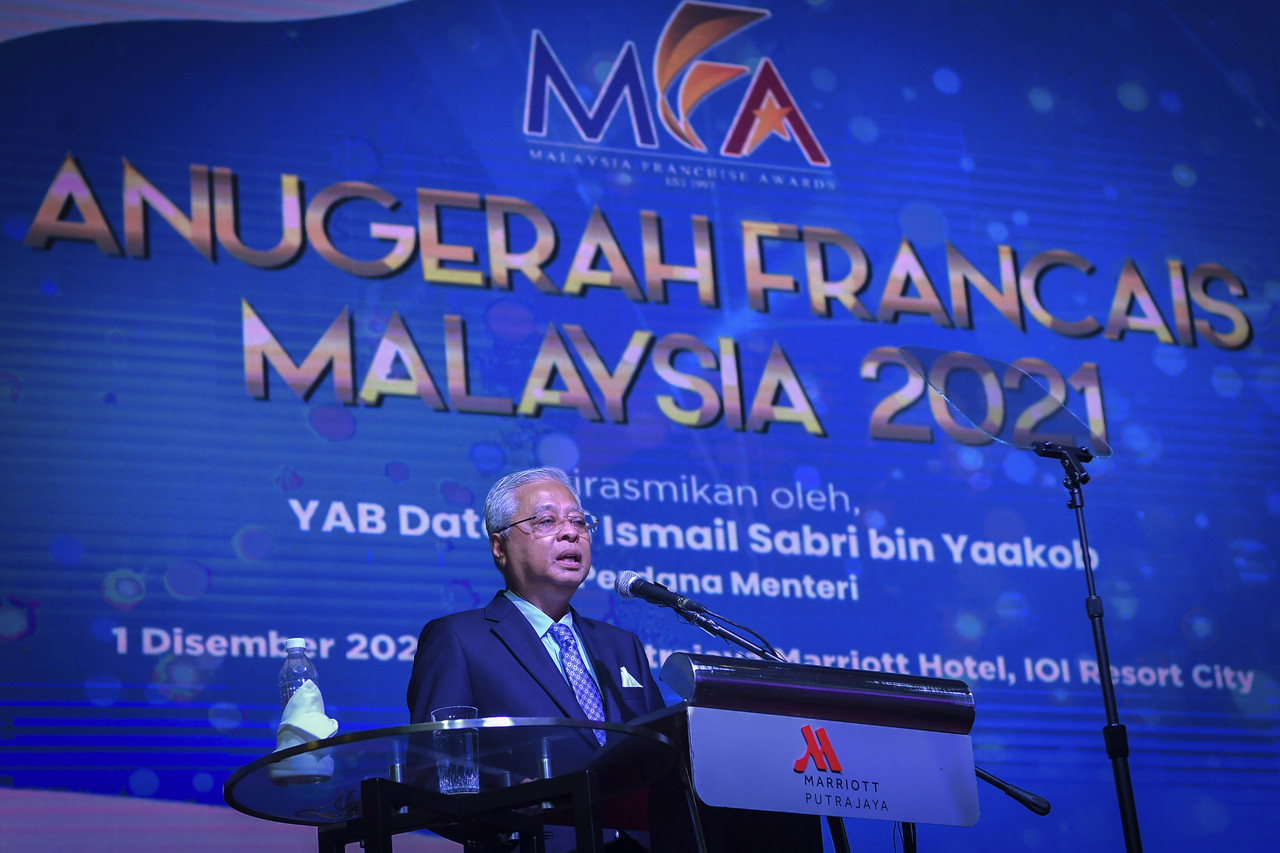 PUTRAJAYA (Dec 1): The government intends to continue with micro franchise and affordable franchise development programmes next year as well as to ensure more receive their benefits especially those from the B40 and M40 groups, said Prime Minister Datuk Seri Ismail Sabri Yaakob.

He said the micro and affordable franchise development programmes which were introduced by the government this year to assist the B40 and M40 groups to be involved in the franchise industry, had received a very encouraging response.

To date, he said 144 applications from franchisors and potential franchisees worth RM22 million have been received to be processed for the programmes under the Domestic Trade and Consumer Affairs Ministry (KPDNHEP).

Eight franchisors and 29 franchisees have received government assistance through these programmes with an annual allocation amounting to RM4.5 million for the current year, he said when speaking at the 23rd Malaysia Franchise Awards Night 2021 (MAF 2021) here today.

Domestic Trade and Consumer Affairs Minister Datuk Seri Alexander Nanta Linggi on April 6 announced a programme grant package aimed at developing more franchise packages worth RM100,000 and below as well as increasing the number of franchise industry players from the B40 and M40.

Ismail Sabri said the success of the micro and affordable franchise programmes was part of the 100-day key performance indicator (KPI) of Cabinet Ministers to be evaluated under the aspiration of the Malaysian Family.

He said the franchise industry is providing more 80,000 jobs, a contribution valued at more RM1.4 billion in the annual economic cycle for workers of franchise companies.

As at Nov 30, (2021), the value of the franchise industry has surpassed RM14.6 billion, an increase of almost 10 per cent compared to the year before even though the current financial year has not yet ended and the world is still facing the COVID-19 pandemic, he said.

He added that Malaysians should be proud that local franchise brands have succeeded in setting foot in more than 70 countries with Saudi Arabia as the country with the most Malaysian franchise brands with 744 outlets , followed by Indonesia (670 outlets) and the United States with 424 outlets.

Ismail Sabri said the franchise industry is expected to continue contributing to the rehabilitation of the country’s economy from this year with various initiatives and programmes implemented by the government.

“The government will continue to support the development and growth of the franchise industry to ensure more players could be created while creating more job opportunities for the Malaysian Family,” he said.

According to him, under Budget 2022, especially for franchise development and direct sales, the government is allocating RM3 million to drive the franchise industry further.

He said franchising is a form of business that is fast gaining popularity among traders and members of the public as the concept of business has proven to be viable apart from the popular brands.

“Through the franchise system, the business could be expanded faster through its large network. This would also assist to stimulate economic activities in the country especially in food and drinks, retail, education and services sectors,” he said.

Meanwhile, Malaysian Franchise Association (MFA) chairman Datuk Radzali Hassan in his speech said MFA would continue to implement programmes and activities to meet the demand and needs of the industry to support the government efforts to keep positive economic growth in the country.

At the award ceremony tonight, there were 13 categories of awards involving franchisors, franchisees, master franchisees, media and organisations as well as individuals who contributed and served in the growth of the national franchise industry.

Global Art&Creative Sdn Bhd received the 2021 Best Franchise award well as two other awards, the Best Franchisor and the Most Innovative Franchise.