Friday, January 21
You are at:Home»Columns»Nature Matters»Our natural world is polluted with plastic 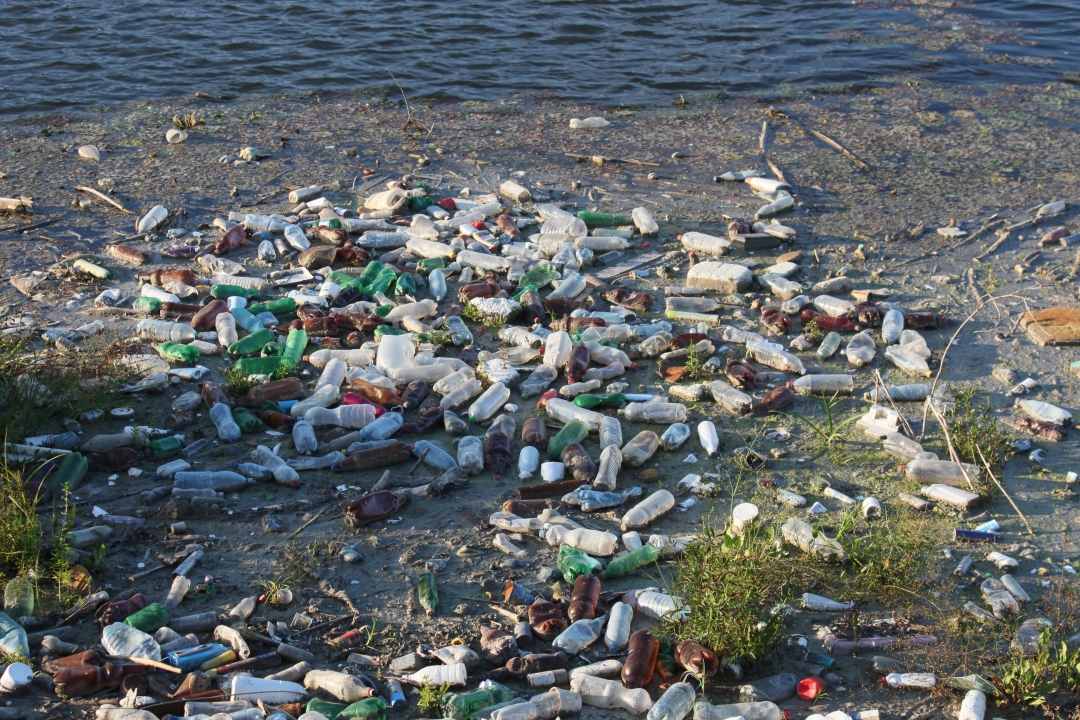 Plastic bottles and containers are polluting our rivers. — Photo from Piqsels

IN 1897, Anton Chekov, the famous Russian playwright in his play, ‘Uncle Vanya’ wrote, “Man has been endowed with reason, with the power to create, so that he can add to what he’s been given. But to now he hasn’t been a creator, only a destroyer. Forests keep disappearing, rivers dry up, wildlife’s become extinct, the climate’s ruined and the land grows poorer and uglier each day.”

It has taken the best part of 124 years for us to realise the truths in Chekov’s words.

I still await the publication of the COP26 report from its meeting in Glasgow in November but in its run up, in a pre-conference speech the words of the 18-year-old Swedish activist, Greta Thunberg, hold true, “Blah, blah, blah, politicians.”

This statement, implying that action speaks louder than words, was echoed in the words of a 15-year-old Indian girl, Vinisha Umaskankar, in her speech before world leaders at that conference. She bluntly stated: “Me and my generation will live to see the consequences of your actions today … many of my generation are angry and frustrated at leaders who’ve made promises and failed to deliver … I’m a girl from Earth-Today and I ask, with all due respect, that we start doing … Please stop debating the old decisions. We need a new vision for a new future.”

This was the teenager who invented a solar-powered ironing cart when she learned how charcoal burning damaged the iron vendor’s lungs and affected air quality. Hoorah Vinisha for politely delivering the feelings of the younger generation on the consequences of climate change affecting all of us.

Alok Sharma, the British president of COP26 said at a press conference: “It is very clear that young people are worried about the future and they are angry. They have every right to be angry because world leaders collectively over time have failed to deliver.” How true these words are.

What are we doing about the amount of plastic rubbish in our households and our daily inhalations of micro-plastics? I pray this, too, may have been included on the COP26 agenda. Plastic pollution on beaches is well reported with regular teams of volunteers cleaning up beaches but there is yet more to explore in our daily lives.

From Nov 1, I now have a special blue bag, provided by my local council’s waste disposal sub-contractors, to store plastic bottles, pots, tubs, trays and tin cans, foil, and aerosols. This blue bag, along with my black box containing cardboard and paper, and my green box for glass bottles, jars, and cardboard cartons, together with my brown food waste bin, I have to sort for the weekly household rubbish collection. It has recently dawned on me that I need to be retired to find the time to get the right items in the right bag and boxes. Electricity, I am informed, is generated from some of these items, garden compost from others and plastics are turned into new products and packing materials.

Our children and grandchildren know more about these environmental matters than we can fully comprehend for they are topics which they learn in science, geography and health education in their respective school’s curriculum. 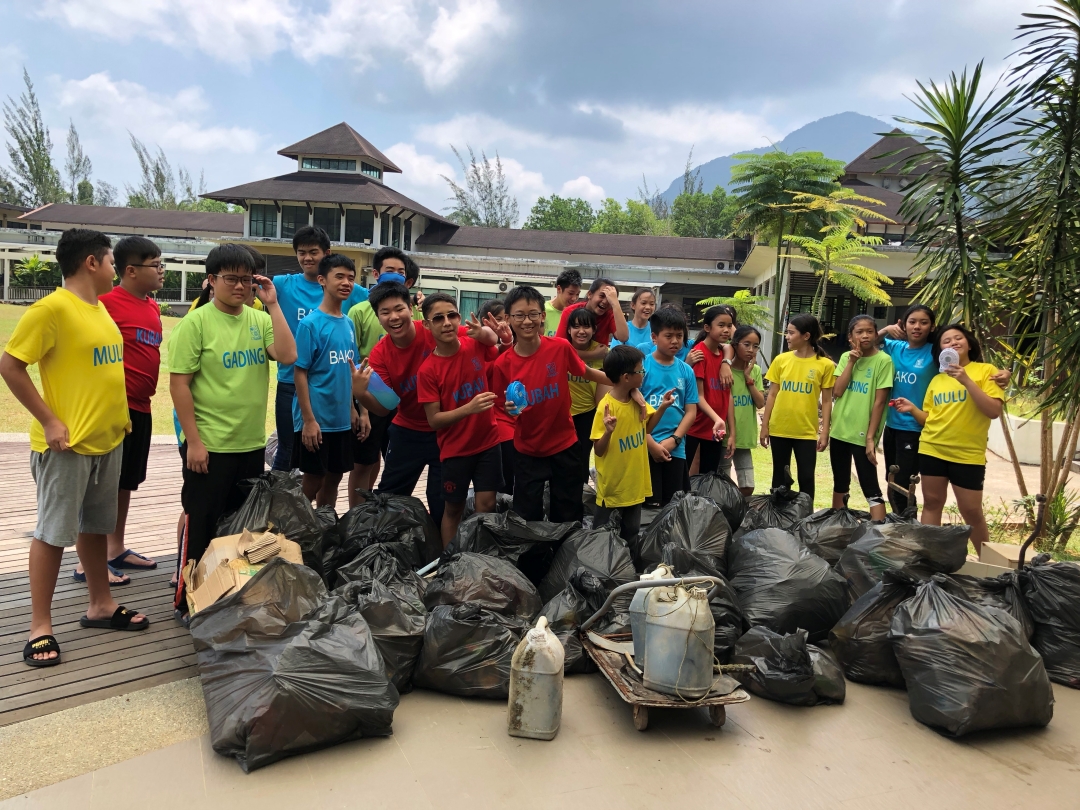 The products of a Kuching school students’ beach sweep at Damai Central Beach — bagged and ready for the waste disposal collectors.

Alexander Parkes, a British chemical engineer, is attributed with the invention of plastic in 1860. This, he called ‘Parkesine’, which was an organic substance derived from cellulose. Today, there are altogether 45 different ‘families’ of plastic with hundreds of varieties within each family. They all have one feature in common and that is their durability, taking hundreds or even thousands of years to decompose. Playing a very large part in our lives, plastic has a very strong impact on the world at large. In the developing world, people eke out a living by picking out plastic bottles and containers from densely polluted rivers of plastic which they sell to recycling factories.

In other deprived areas of the globe, young children scavenge landfill tips collecting plastic bottles for sale to bring in an income to their impoverished families. Most of the developed world’s plastic waste ends up in landfill sites.

A rogue British waste disposal company was, comparatively recently, fined thousands of ‘dollars’ both in Malaysia and again in the UK for sending containers of plastic for disposal in Malaysia. Rightfully, the containers were returned to the UK at the company’s expense!

Microplastics are divided into types. Primary ones, with sizes of less than 5mm, composed mostly of microfibres, manufactured for the cosmetic, clothing, and other industrial processing industries, are the scourge of our world. These are flushed from our polyester and acrylic clothes during washing and end up in our rivers, en route to the sea. Some 35 per cent of all oceanic microplastics come from textiles and clothing.

Secondary microplastics are derived from the degradation of larger plastic products. There are extensive areas known as ‘Garbage Patches’ in rotating gyres in our oceans. These combined types of plastic enter the food chain, ingested by krill, whales, seals, porpoises, dolphins, sharks, turtles, and fish and eventually, by ourselves! Such microplastics are mistakenly eaten by these creatures which identify them as food and eventually, through malnourishment and poisoning, die.

Recent research has revealed that the average person could be daily breathing in 7,000 minute pieces of toxic plastic. To date, the greatest amounts of airborne microplastics have been found in Beijing and London.

So light are they that they may be carried by the wind over very long distances. Alas, we are surrounded by microplastic in our homes, from the paints we use, children’s cuddly toys, clothing garments, bed sheets and pillow cases, carpets, rugs, and food packing.

In our atmosphere, microplastics have been found at a height of 3.5km above the Earth’s surface. A massive cycle of plastic is constantly moving around our world from soils to rivers, oceans, and air. Meteorologists believe that microplastics in our atmosphere could potentially interfere with our climate. Floating in the air they can scatter sunlight, acting as a shield to cool our climate. On the other hand, they can also absorb solar radiation reflected from the Earth into space and potentially warm our climate. Studies of the effects of microplastics upon climate change are growing in momentum in meteorology.

Let me eat my words

Approximately five billion tonnes of plastic waste lie in landfills or randomly scattered around our local environments and this figure is forecast to double over the next 30 years. This massive amount of plastic garbage, already in our environment, will continue to break down and we could be facing a microscopic time bomb unless we take immediate action. Earlier, I poured scorn on the time I take to sort out my waste products in this or that bin. I should eat my words for, with further investigation, I have now found that my plastic waste is truly being recycled and my food waste in converted into garden compost.

If every local council in our world had such a recycling operation, it would certainly reduce the amount of plastic that is dumped in landfill sites.

Nature’s food chains would be a lot safer and the atmosphere we breathe a lot cleaner. My local country lanes, footpaths and beaches are littered by the ‘throw away’ society in which we live. Such rubbish is tossed from the hands of adults and not from children – for they know better.