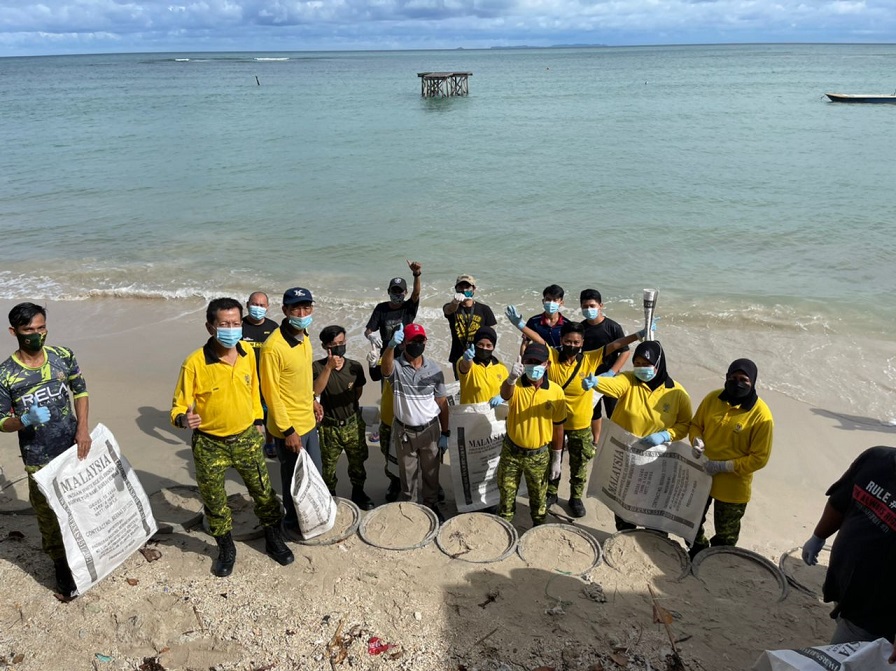 STB staff and the village communityclean up the beach.

KUDAT (Dec 6): Kampung Tajau Laut here holds a lot of potential as an excursion destination for those looking to get away from the rush and bustle of the city and enjoy a peaceful coastal life.

The tranquil seaside village, some 180 kilometres from the state capital, has about 500 population, the majority of whom are Bajau and rely on marine products.

There is currently only a private guesthouse – Tajau Laut Guesthouse – that can accommodate overnight visitors.

It is operated by Junaidi Awang Bulat, who helped bring tourists to the village and get the community involved in tourism activities.

“The tourism here is still new. I started in 2016, and with the help of villagers, I constructed a guesthouse made out of driftwoods,” he said, adding he now has three guesthouse units with five rooms in total.

Since operating, Tajau Laut Guesthouse recorded an increase in tourist arrivals over the years, with 589 guests recorded in 2019.

Out of the figure, 446 were foreigners from Europe, Australia, South Africa, New Zealand, Taiwan, India, Argentina and Japan, among others.

Junaidi noted that after seeing the favourable response, the villagers expressed interest in developing community-based tourism, for which they were initially unprepared.

Recently, the Sabah Tourism Board (STB) product team visited Kampung Tajau Laut to brief the people on the community-based tourism concept after seeing the potential.

Junaidi stated that the villagers were grateful to STB for meeting with them because such interaction has raised people’s awareness of the necessity of working together to transform Kampung Tajau Laut into a rural community-based tourism destination and keeping their village clean.

To begin, he stated that the village community had formed a committee to discuss necessary matters, such as potential products or activities to be introduced to future visitors.

For the time being, tourists and visitors can enjoy snorkeling, kayaking, fishing, coral conservation and cooking. The community is planning to build a jungle trekking trail.

During the engagement, STB staff teamed up with the village community to clean up the beach, collecting 438kg of trash.

Plastic bottles, plastic bags, and food plastic packaging made up most of the garbage collected.

“It’s encouraging to see more locals keen to venture into tourism and develop their resources. Over the years, the district of Kudat has seen more growth of accommodation, and could still benefit from more. Our initiatives are in line with our Sustainable Development Goals especially in guiding the product owners and tourism operators in best practices, ” comments Noredah Othman, CEO of Sabah Tourism Board.