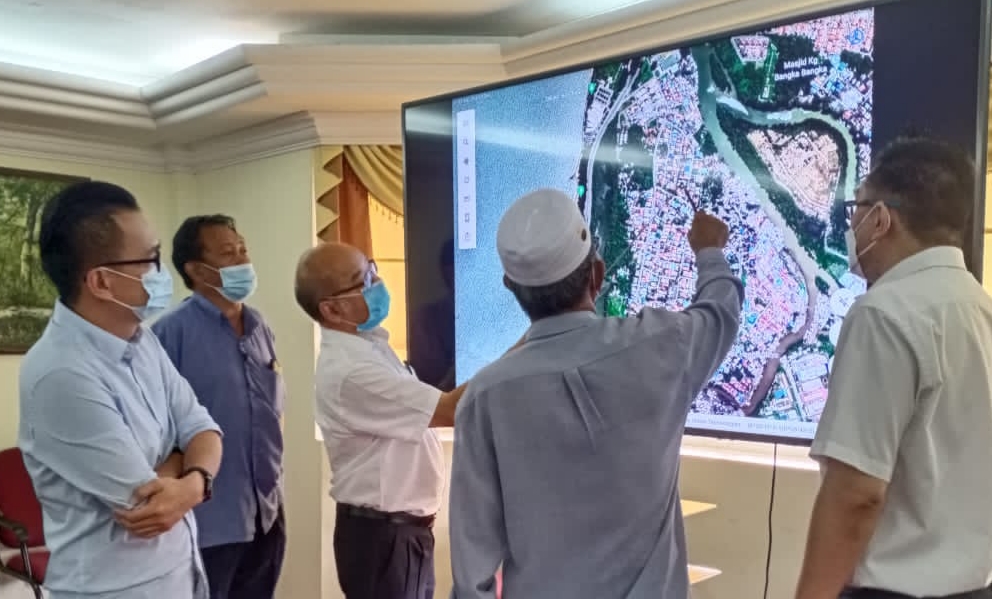 Yong with some residents from Kg Likas showing an illustration of flood situation in the event of floods due to loss of flood mitigation lagoons at Likas Bay.

KOTA KINABALU (Dec 29): With the floods occurring more often and in severity, the authorities are urged to disallow any possibility of any of the Likas lagoons being filled up as land.

Sabah Progressive Party (SAPP) President Datuk Yong Teck Lee said the Likas lagoons have been successfully retained as flood mitigation assets to capture the water runoff from the Likas ridge along Tuaran road and the Likas residential areas from Mile 2 to 4 1/2.

“Already the development of the Likas ridge, which was previously strictly restricted and controlled, has caused a heavier runoff of rainfall,” he added.

“These rainfalls need huge drains to drain out the water into the Likas lagoons before entering the open sea. During high tides, the flood gate at the Likas lagoon will shut and the pumps will pump out the flood water.

“These flood mitigation measures have worked well ever since being built in the late 1980s, after the city floods of the early 1980s and especially one devastating flood in 1988.

“The announcement by the Irrigation and Drainage Department (DID) that preliminary work would start off this year and construction scheduled next year with the goal to improve the drainage system in Basin 8, which includes the Damai and Dah Yeh Villa areas, should look into the effects of a tract of land 16.21 hectares (40.05 acres), the size of 40 football fields that was later zoned for commercial use.

“I am shocked to have found out recently that part of the Likas lagoons have been zoned for commercial development. This should not be allowed,” Yong said.

“A search at the Land Department last week revealed that a Likas lagoon was approved to a private company in 2000.

Yong said this piece of land occupies a portion of the Likas flood mitigation lagoons. In the case if reclamation is done to this area will adversely swell flooding in Kg Likas and other areas around it.

According to some residents at Kg Likas, they are very worried  that Kg Likas and Likas areas will be flooded if the reclamation of the Likas lagoons go ahead.

He said that such land should be retained as a water retention pond to serve as an outlet for the surrounding areas during heavy rains. The recent floods in Taman Sri Muda in Peninsular Malaysia should serve as a stark reminder that land meant for water retention later reclaimed for development has its dire consequences.