Thursday, January 20
You are at:Home»News»Sarawak»Councillor: Veterinary Dept probing cause of mass death of pigs in Durin 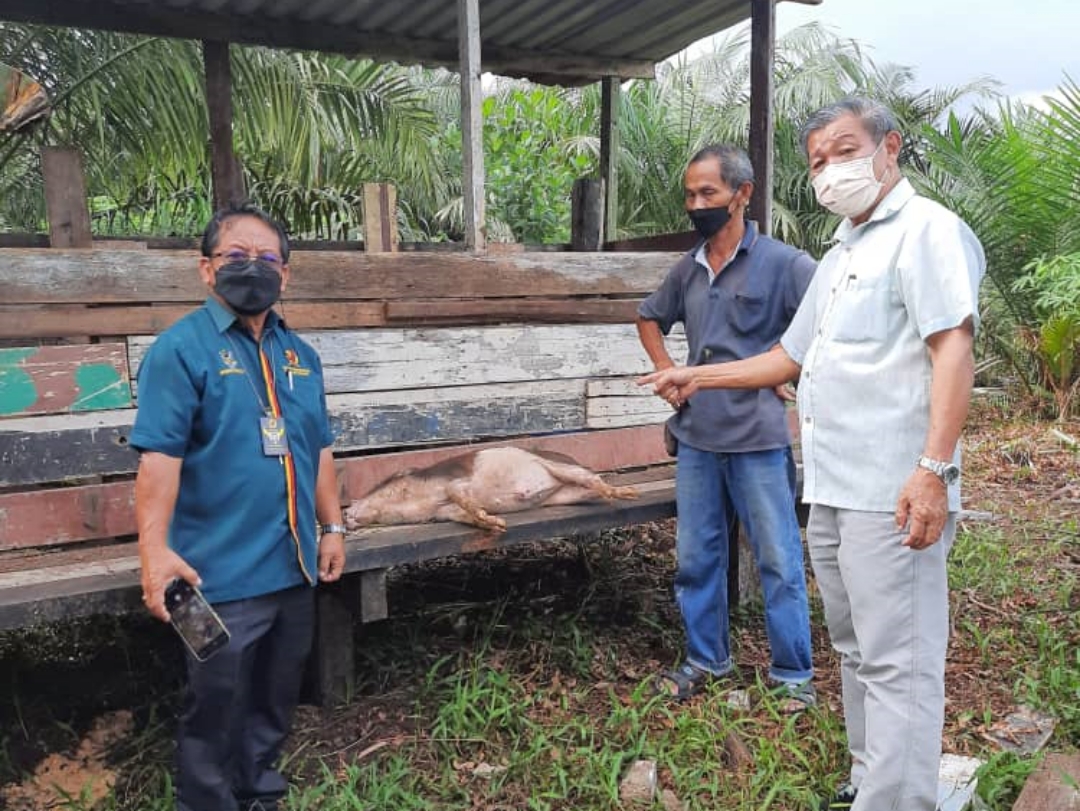 Teo (right) points to a dead pig outside a longhouse in Durin during a visit with Bennet (left), while the pig owner looks on.

SIBU (Jan 7): The State Veterinary Department here is pondering whether the mass death of pigs in Durin could be due to swine fever that spread from Sabah.

Sibu Rural District Council (SRDC) councillor Teo Boon Siew said this was a possibility that the Veterinary Department was looking at.

He said they wondered whether it could be possibly carried over by wandering wild boars that crossed over from the neighbouring state.

Another possibility the department was looking at, he added, was whether the transmission could be spread through the air from contaminated meat.

Teo, who is also Progressive Democratic Party (PDP) Dudong branch chairman, said a team of officers led by Bennet Anggit had visited the three longhouses where the mass death of pigs had occurred yesterday.

Following the death of pigs in Rh Nancy, he said more than 100 poultries reared by the longhouse folks there had also died.

“The officers from State Veterinary Department office have taken a blood sample from a dead pig.

“The sample will be sent to Kuching for analysis to determine the cause of the mass death of pigs.”

Teo thanked the veterinary team for their prompt response, saying when he informed them of the tragedy, they rushed over to check.

He noted more pigs were dying, and in a case yesterday, the pigs were eating well but they just dropped dead thereafter.

He said the State Veterinary Department cautioned there was no cure for swine fever.

“They want the farmers to be educated to tackle the situation,” he said, and asked community leaders there to help.

Teo said farmers rearing pigs in Durin were from the Chinese and Iban communities.

He said he had heard of claim that about 400 more pigs had died in another area in Durin, but he was unsure of it.

He appealed to farmers not to throw the carcasses of pigs into the river, but to bury them properly to prevent the spread of diseases.

He claimed they had called the board for help, and although the board promised to do so, they never sent water over.

Teo admitted that it was inevitable that mains could be cut during water supply projects.

“But, whenever that occurs, the board should immediately send water over to relieve the affected residents.”

He said if they had not enough trucks they should call on the contractors to help.

“Areas affected by the recent water cut are wide, including those in Sibujaya Township, Minyan and the surrounding areas.”