Sunday, May 22
You are at:Home»News»Sarawak»Farms in two more villages in Sibu hit by mass death of pigs 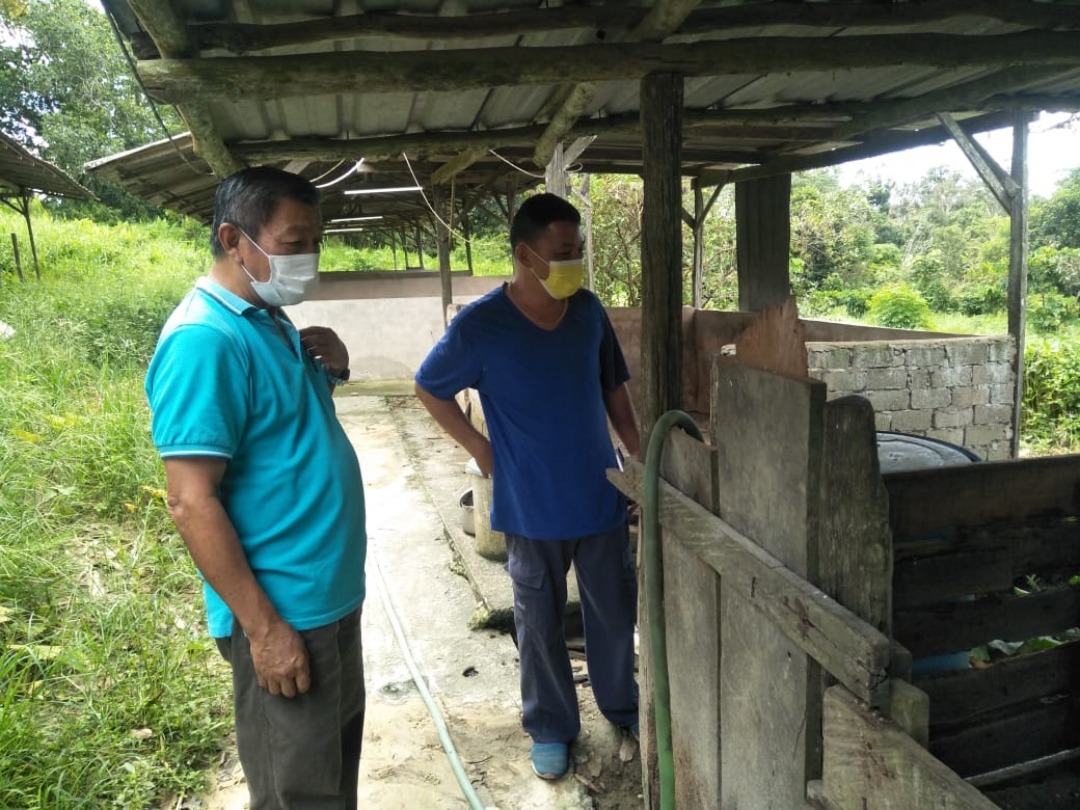 Teo (left) looks at a pig pen in Bintangor while a farmer looks on.

SIBU (Jan 7): Two more villages in Bintangor have been hit by suspected swine fever, with more than 200 pigs dead in the last two months owned by three farmers.

The two villages are Tulai and Narasit nearby, where one of the farmers had lost 130 of his pigs.

The Sarawak Veterinary Department was still determining the cause, with blood samples of the dead pigs having been sent to Kuching for analysis.

The worst-hit farmer named Wong said his pigs had started dying on Dec 4.

“Within a week, almost all my pigs were dead. I only have one pig left in the pen now,” he said.

Wong said he had to borrow an excavator from a nearby oil palm plantation to bury his dead pigs.

Another farmer named Ting said his pigs had started dying since last November, with only one left in his pen now. He used to have more than 40 pigs.

He said he managed to save his last pig after he fed it with Chinese herbs, but that came too late because his other pigs had died.

He said when he found his pigs started dying, he started isolating them, but he still could not save them.

He said the last pig was saved after he injected it with Chinese medicine and added Chinese herbs to its food.

He said his last pig, which also became sick, was slowly recovering now after he administered it with the Chinese herbs.

“The pig has started eating in the last few days,” said Ting.

He said his pigs had already been booked for the coming Chinese New Year celebration, but he could not deliver the order now.

“Even my family will not have pork dishes for the coming Chinese New Year celebration.”

He said when he learnt of the swine fever, he had taken precautions to protect his pigs.

Teo was in Bintangor yesterday to look at the situation of the plague that killed the pigs.

He alleged that the government was slow in their efforts to save these farmers from losses.

He said life had been made hard in the onslaught of the Covid-19 pandemic.

“Now, the pig farmers are hard-hit by the mass death of pigs. I hope the government will give financial aid to these farmers. They need to come to the rescue of the situation.”

Teo also revealed that he had received information concerning the mass death of pigs in Naman, a village about a 40-minute drive from Sibu.

He said farmers in Batu Wong village near here had also been affected by the mass death of pigs.

“I have been informed by the community leaders of these two areas of the tragedy.”

He said the pigs there had also started dying a month ago.

“There are five longhouses in Naman. When the pigs start dying in one longhouse community, it will definitely spread to the rest.”

He called on the Veterinary Department here to head to these villages to look at the situation.

He said the pigs were all kept in the pens, adding: “I wonder how this sickness spread so fast.”

He hoped pig dealers here would have their pork supply certified by the Health Office here.