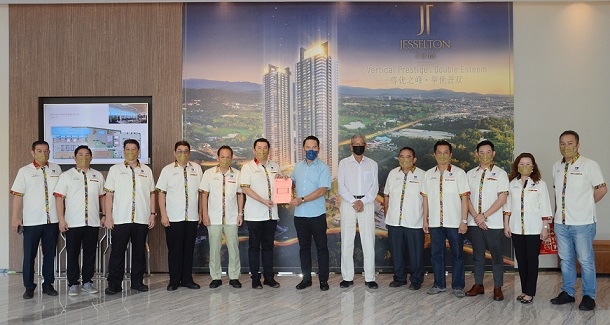 Chin (sixth left) hands an invitation letter to Chu while Lo (right) and others look on.

Sabah Economic Advisory Council (SEAC) chairman Tan Sri David Chu said there were only three APs issued for durian export in Malaysia, all of them held by West Malaysian companies.

Consequently, he said local producers would have to go through these peninsular companies to export their fruits and had no control on their pricing.

In order for the agricultural sector to grow exponentially, he said the State Government should be given the authority to issue AP for the export of fruits from Sabah.

“Now that the State Government is empowered to issue deep-sea fishing licences, the same should be done for export licences for agricultural products.

“In doing so, local Musang King producers will be able to export durians to China and Hong Kong,” he said during a courtesy call by Malaysia-China Chamber of Commerce (MCCC) Sabah branch led by its president Michael Chin here on Friday.

Chu called on MCCC Sabah to raise this issue to their national counterparts to fight for Sabah to be given the authority to issue fruit export AP.

“There are a wide variety of fruits cultivated in Sabah yet the APs are controlled by West Malaysians.
“This is unfair.”

On another note, Chu said Sabah Air should explore the possibility to expand its flight routes.

He said Sabah Air could collaborate with other airlines, including China companies, to provide flights to more destinations.

He also hoped that MCCC Sabah would work with SEAC to bring more investors to Sabah to develop the rich resources and vast fertile land here.

Despite the Covid-19 pandemic and movement control order (MCO) for the past year, Chu said the SEAC has not stopped working, including having dialogues with potential Chinese investors via video conferencing since its inception a year ago.

He said the SEAC was recognized by Chinese governmental bodies and private firms because the council was formed by the State Government and even has its own office on the 25th floor of Menara Kinabalu, formerly known as Sabah State Administrative Centre (PPNS).

“If ITP succeeds, Sabah will have 80,000 containers to export each month.”

He was responding to Chin’s remark on the price increase in building materials, hardware and plastic products, which was worsened by the shortage of containers and shipment frequency to Sabah.

Chin hoped that the SEAC could convey to the relevant authority to upgrade infrastructure and efficiency at Sabah ports.

MCCC Sabah also invited Chu, who is an honorary advisor of the chamber, to its Chinese New Year luncheon at Hakka Hall on February 5.

Previous ArticleUnifor: Non-Islamic houses of worship can open until midnight on CNY
Next Article Hundreds turn up at funeral hall to say final goodbye to former football star Shebby Singh