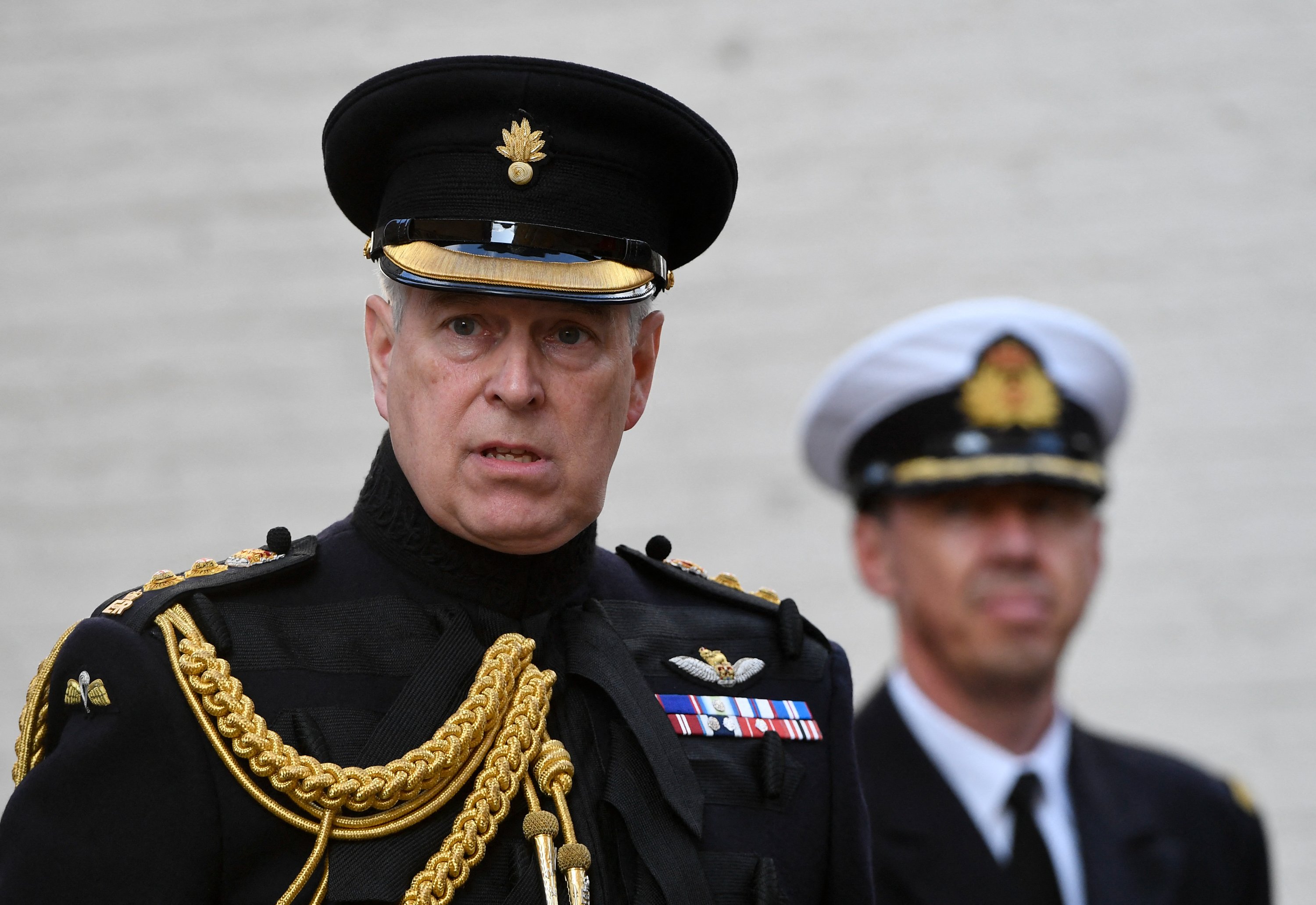 In this file photo taken on Sept 7, 2019 Prince Andrew attends a ceremony commemorating the 75th anniversary of the liberation of Bruges. — AFP photo

LONDON (Jan 14): Queen Elizabeth II’s second son, Prince Andrew, was on Thursday effectively stripped of his position in royal life, in a dramatic move as he faces a US civil case for sexual assault.

British media quoted an unnamed royal source as saying he would no longer use the “His Royal Highness” (HRH) title, which designates senior members of the royal family, in any capacity.

The move came after Buckingham Palace announced that he had given up his honorary military titles and charitable roles as the US case looms.

“The Duke of York will continue not to undertake any public duties and is defending this case as a private citizen,” a statement read.

A New York judge on Wednesday dismissed an attempt by Andrew’s lawyers to have the case brought by Virginia Giuffre thrown out.

Giuffre, 38, accuses Andrew — often called the Queen’s “favourite son” — of sexually assaulting her in 2001 when she was 17, claiming she was delivered to him by Jeffrey Epstein.

Andrew, who strenuously denies the allegation, was forced to quit public life after a calamitous 2019 interview in which he claimed to have no memory of meeting Giuffre and defended his friendship with convicted paedophile Epstein, who was found hanged in prison in 2019.

Public outrage at the time saw several charities and associations distance themselves from him and he has rarely been seen in public since.

On Thursday, he was seen being driven from his house near Windsor Castle, west of London, an AFP photographer said.

More than 150 Royal Navy, Royal Air Force, and British Army veterans wrote to the Queen, calling on her to strip Andrew of his ranks and titles in the armed forces.

The 95-year-old head of state is commander-in-chief of the army, navy, and air force.

“Were this any other senior military officer it is inconceivable that he would still be in post,” they wrote in a joint letter made public by the anti-monarchy pressure group Republic.

“Officers of the British armed forces must adhere to the very highest standards of probity, honesty and honourable conduct.

“These are standards which Prince Andrew has fallen well short of,” they said, adding that he had “brought the services he is associated with into disrepute”.

Senior members of the British royal family have typically been appointed as honorary heads of military units, with the Queen’s approval.

Andrew was honorary colonel of the Grenadier Guards, whose soldiers guard Buckingham Palace in their distinctive bearskin hats and red tunics.

Royal patronages are associations with charities and other organisations.

For a monarchy beset by crises, 2022 was meant to celebrate Elizabeth II’s 70 years on the throne, with parades, pageants, and public holidays.

But Andrew’s legal woes threaten more pain for the ageing monarch, after her grandson Prince Harry and his wife Meghan’s shock move to the United States, from where they criticised royal life, including accusing it of racism.

Andrew will likely have to respond to Giuffre’s accusations from Britain in a recorded deposition, unless he successfully appeals or reaches a settlement.

One of Giuffre’s lawyers, David Boies, told the BBC on Wednesday his client was not ruling out a deal, but a financial settlement would not be enough.

“It’s very important to Virginia Giuffre that this matter be resolved in a way that vindicates her and vindicates the other victims,” he said.

Royal historian Anna Whitelock said there were “no good options” for Andrew. A financial agreement would also raise questions about where the money came from, she told AFP.

According to the British media, he recently settled a dispute over a £6.6 million ($9 million, 7.9 million euros) debt, which will allow him to sell a Swiss chalet he bought in 2014 for a reported £18 million.

The BBC’s former royal correspondent, Jennie Bond said Andrew has recently “given the impression of a rabbit running scared of hiding behind his mother’s tartan skirts… trying to avoid the court papers being served on him”.

In 2002, the Queen’s Golden Jubilee year saw the death of her younger sister, Princess Margaret, then their mother, also called queen Elizabeth.

“And now this is another jubilee in which something so distasteful is hanging over the whole of the next few months,” she told Sky News.

“But how embarrassing for a 95-year-old woman to have to challenge her 61-year-old son about his allegations of sexual misconduct.” — AFP