Saturday, October 8
You are at:Home»Features»A great place to reconnect

Photo shows a Berawan floating fisherman’s hut on the edge of the lake in Loagan Bunut.

THE notorious ‘landas’ (monsoon) rain was still in full force when Zainudin Latip and Chris Sawan made their trip to Loagan Bunut National Park recently.

The men, who were Tanjong Lobang School mates back in the 1960s and have remained good friends since, braved the downpour nonetheless.

“We wanted to see this place for ourselves, based on what we’d been hearing from friends and what we’d been reading in the papers,” Zainudin told thesundaypost.

For him, it was his first trip to the park.

“I even brought my fishing gears,” he enthused.

Of boarding school and friendship 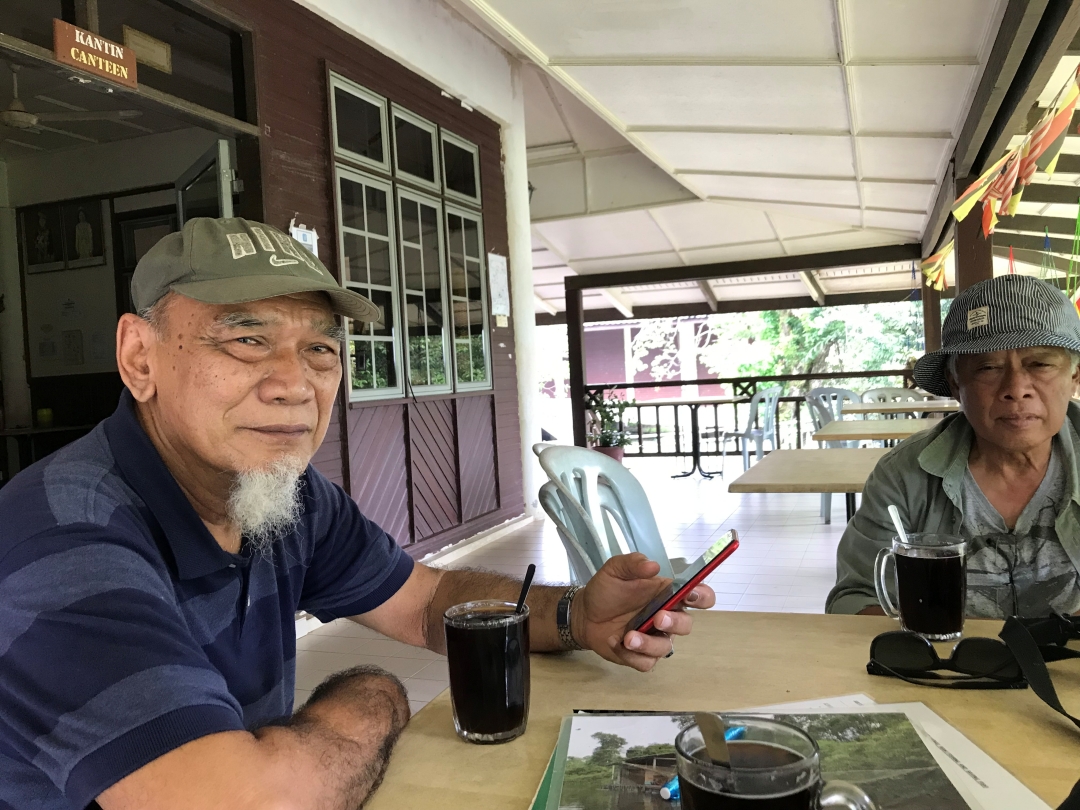 Zainudin entered the boarding school in Tanjong Lobang when his father was transferred from Miri. Throughout his five years there, he had forged lifelong friendship with Chris and other schoolboys.

Following his retirement 50 years later, he began his travels all over Sarawak to reconnect with his former schoolmates.

“It is also my dream to go and see for myself the many remote pockets in Sarawak before I get too old to travel,” he said.

For this Loagan Bunut trip, his old school buddy Mahmood Yusop had helped out by giving him a ride from Kuching to Bintulu, where he later boarded a bus bound for Miri.

“I am so happy to be able to see the lake and take a boat ride there, despite not being able to do much fishing because of the rain – the weather had not been very favourable. It had been raining since I arrived in Miri.”

For Chris, however, it was his umpteen trip to the park, named after Sarawak’s largest natural lake, encompassing an area of 650 hectares.

“My first trip to Loagan Bunut was in 1986 by helicopter, to accompany (former deputy chief minister) Datuk Seri Daniel Tajem. One day, he invited me to travel with him, which was a dream come true.

“We then went upriver to Long Teru and other places on board a government boat that had been arranged for us.

“It was after that I made several private boat trips, usually from Lapok, throughout the 1980s and 1990s,” said Chris. 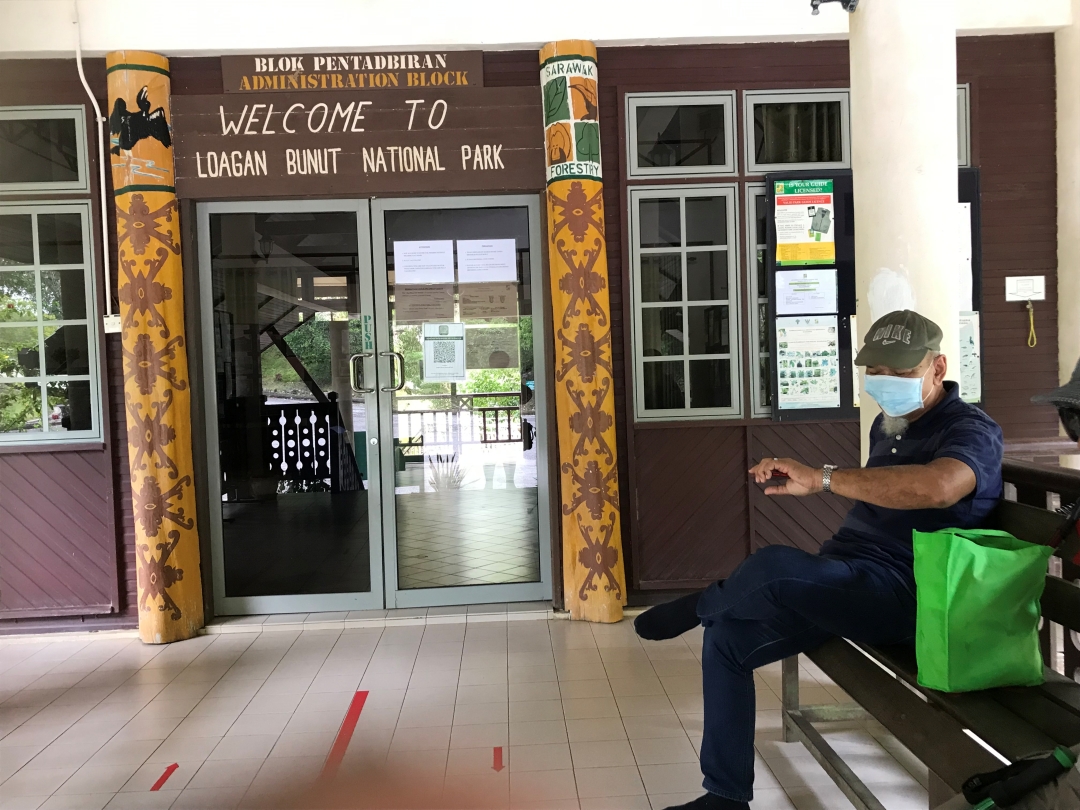 Zainudin waiting for the national park office to open at 2pm.

The recent trip, however, was his first time driving to the national park from Miri.

“I think despite being a national park, it is a tourism spot for the 21st century.

“With good road connectivity, more people should come here. I also think retirees wanting to do reunions should opt for Loagan Bunut, instead of choosing a five-star hotel.”

In remembering his Tanjong Lobang school-mate Daniel, Chris said coming from the rural areas and going through hostel life together, they were really close.

“We were very much on our own and all the little things that we had, we shared with each other.” 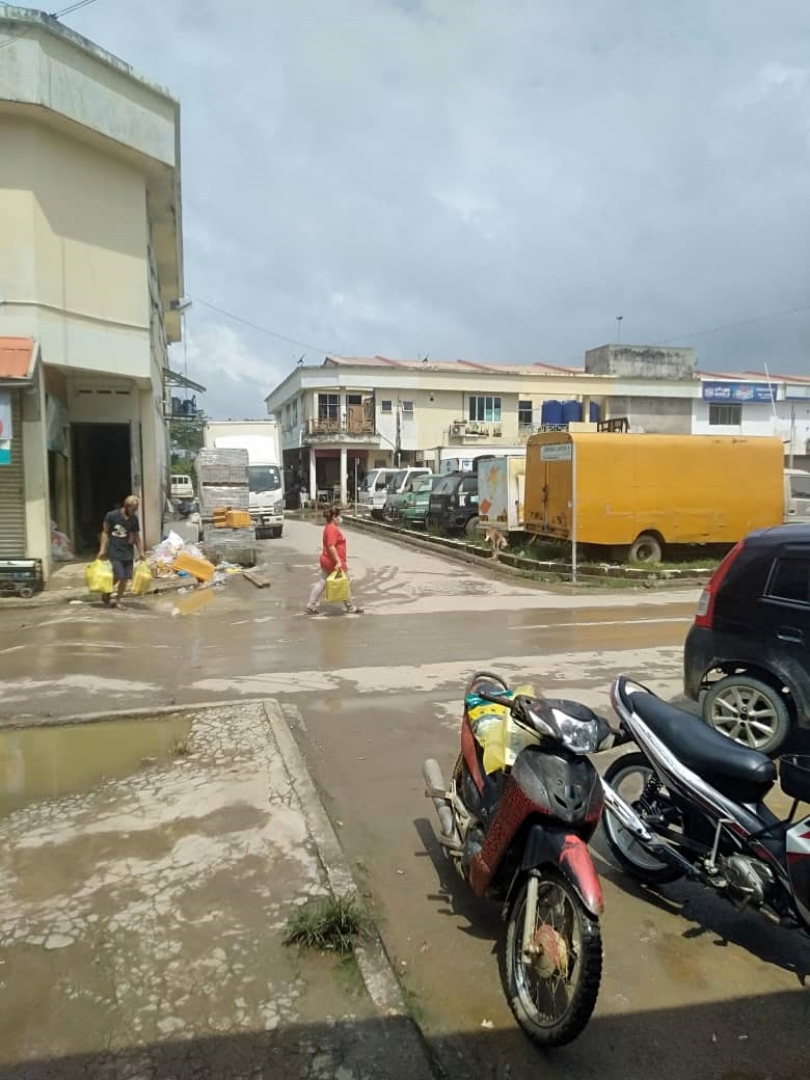 Lapok – a roadside town where visitors would make a stop-over before proceeding their journey to Loagan Bunut National Park.

Lapok is apparently a roadside town, established as a depot during the timber boom years ago where the jetty became the loading-unloading site for goods coming from and going to the timber camps and the logs-transporting trucks passed the bazaar.

Several wooden shops operated by Chinese traders were set up before the Tinjar Bridge was completed. In the 1970s and 1980, there was a longhouse nearby and a small government-run primary school there.

The teachers and other school staff would travel via longboats from Marudi whenever the new term commenced and in this regard, they could only collect their salaries in Marudi once every three months.

“Life, back then, was simple,” reminisced retired teacher, Joshua Jenau, who is almost 80 now and currently lives in Miri.

Decades have passed and Lapok is still considered ‘a cowboy down’.

Due to telecommunication service issues, Zainudin and Chris were not able to contact the Loagan Bunut National Park office earlier. They were to learn later that the telco tower at Loagan Bunut provided good WiFi coverage for the Berawan longhouse folks at the lake.

The rural community was fairly modern with many residents owning decent cars and motorcycles, and their units having the latest electronic goods and appliances such as fans to keep their living areas cool and perhaps the most important, refrigerators and freezers to store their food supplies, especially the fish from Loagan Bunut.

Zainudin and Chris later met up with a park warden, Jalin Luta, who together with his wife also managed the canteen at the park.

“Many groups have been coming here (national park),” said Jalin, who could also arrange for boat rides on the lake.

“Not too long ago, a government agency booked the place for its staff retreat. There were about 30 of them, led by a woman personnel. We cooked for them and they all really enjoyed their stay.

“The park does have the facilities for meetings, outdoor training, hiking and other activities.”

It was already drizzling when Jalin received the two Tanjong Lobang mates, and he was happy to give them a very special rate for a half-hour boat ride.

The park warden, however, reminded the two to abide strictly by the rules and regulations.

“The boatman knows the area very well, and all visitors must listen to him.

Throughout the journey, Zainudin could see ‘pukat’ (large fishing nets) being laid along the edges of the lake, each probably measuring 800 feet (close to 250m) in length.

There were also signs placed at different sections to indicate the depth of water there.

Zainudin proceeded to the mouth of Bunut River, before turning back as per the directive of the boatman.

During the return journey, he could see many floating fishermen’s huts along the edge of the lake – far opposite the national park, which ‘excited the angler in him’. 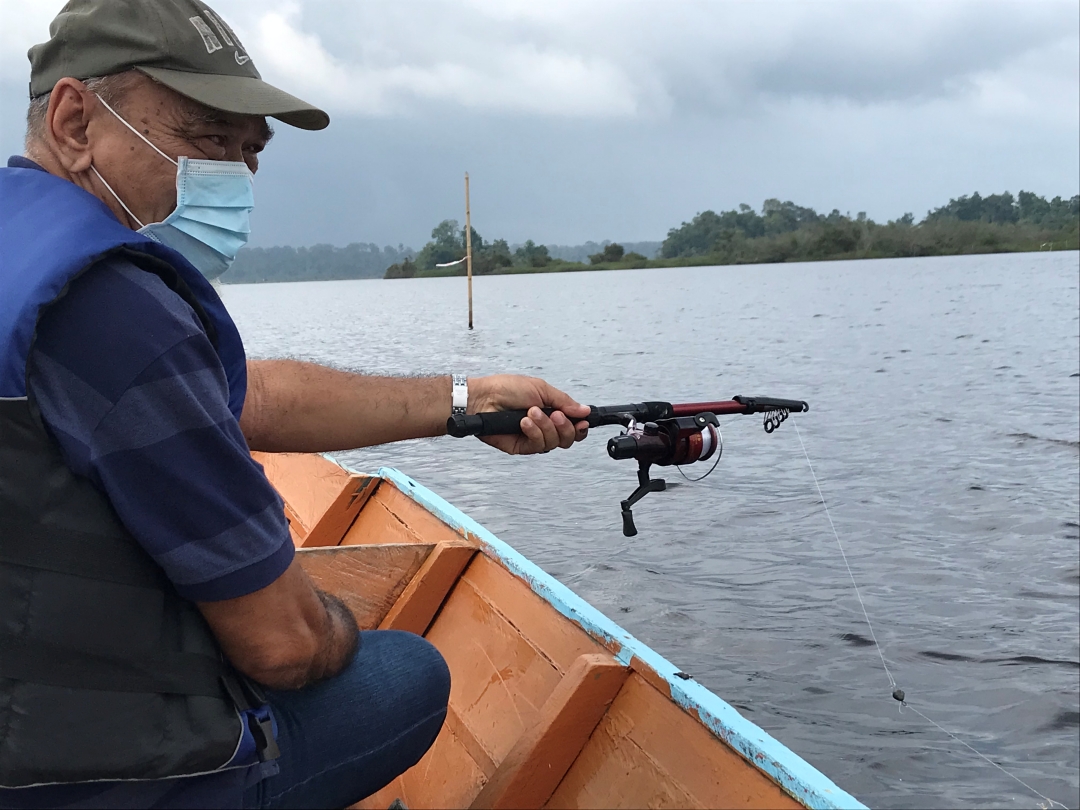 The ‘angler’ in Zainudin unable to resist the urge to fish in the lake.

Malaysian Nature Society (MNS) Miri branch chairman Musa Musbah, also an accomplished angler and a nature photographer, stayed at a chalet run by one ‘Pak Meran’ during his first visit to Loagan Bunut.

“The chalet was on the hill. It was an awesome stay – we’d be sitting on the veranda and counting the big trees and also the birds that we saw.

“According to the local history, Loagan Bunut belongs to the Berawan people; they regard it as their ancestral home. Going by the local ‘adat’ (custom), outsiders were not allowed to fish and hunt in this area in the past.

“An interesting fact about the lake is that it dries up at least twice a year, and only the Berawans are allowed to catch fish in any of the shallow pools that still remain. In fact, this is the time when people can ride motorcycles on the dried-up lake — no kidding!”

Musa said during the rainy season, the water level would naturally rise and such a view would make the houses on the hill appear as if they were on water.

It was during his maiden stay at Loagan Bunut that he obtained Pak Meran’s permission to go fishing.

“I caught a very big fish, which was later cooked and eaten by one of the womenfolk there, who was pregnant at the time. Actually, it was the only fish that I caught that day,” he recalled.

Located 120km from Miri city, Loagan Bunut National Park was gazetted on Jan 1, 1990, and opened to public the year after, on Aug 29.

As mentioned before, it was named after a natural lake there, which the Berawan folks hold sacred.

Having one of the most unusual aquatic ecosystems in Malaysia, the lake would ‘disappear’ when the water level in the adjacent Tinjar River is low, resulting in the dry mud flats to emerge. This phenomenon normally occurs in February and in late May, or in early June or July.

“A large variety of fish, clams and other animals come to Loagan Bunut during the wet season.

“When the lake dries up, they would ‘escape’ to the Bunut River, which flows into Tinjar River.

“Even then, there are still many bird species, such as egrets, that would stay put and feed on the fish, shrimps and frogs that are trapped in the shallow pools amidst the dried mud flats.

“Sometimes, the dry season would go on longer than usual and this is when lots of flora species would grow – turning the dried-up lake into a marvellous landscape for nature photographers.

“There would be swarms of insects feeding on the flora which, in turn, would become food for the fish when the rains return — the food chain would have, by then, gone through a full cycle,” said Chong, adding that during this season, members of many photographers and nature societies would spend days in the park to take photos of egrets, darters, herons, storks, kingfishers and hornbills.

The park’s brochures also mention bulbuls, eagles, magpies, doves and robins – all of which can be seen all-year round.

The reptiles and amphibians include many species of frogs and small lizards, dog-headed water snakes, a variety of tree snakes, and the occasional estuarine crocodiles.

Covering a land area of about 100 square kilometres, Loagan Bunut National Park is also home to a diverse species of trees, from those thriving in peat swamps to ‘giants’ that reach over the height of 50m. 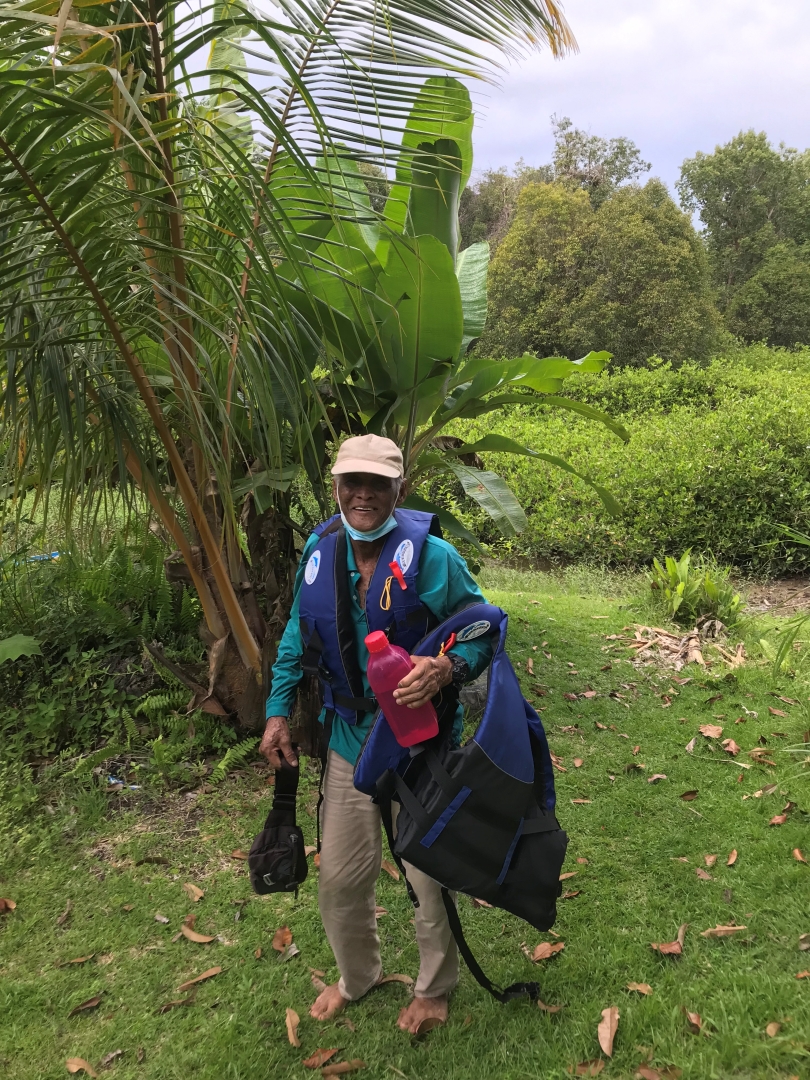 Jalin flashing a smile for the photographer.

The ‘selambau’ and the ‘kurungan’

The Loagan Bunut lake and its seasonal changes have largely influenced the life and practices of the Berawan community, one of which is their unique method of fishing called ‘selambau’.

This system involves using a rectangular net called ‘selambau’ to, literally, ‘scoop out’ the fish as the lake is drying up. This net is mounted on a raft, which can easily be manoeuvred according to the water flow.

The live catch would then be kept in submerged bamboo cages, called ‘kurungan’, before transporting them later to the market.

For an outsider, the sight for the Berawan fishermen bringing the catch in these cages to Marudi is quite interesting – the locals are used to this way of transportation, touted to be peculiar to the inland areas across Baram. 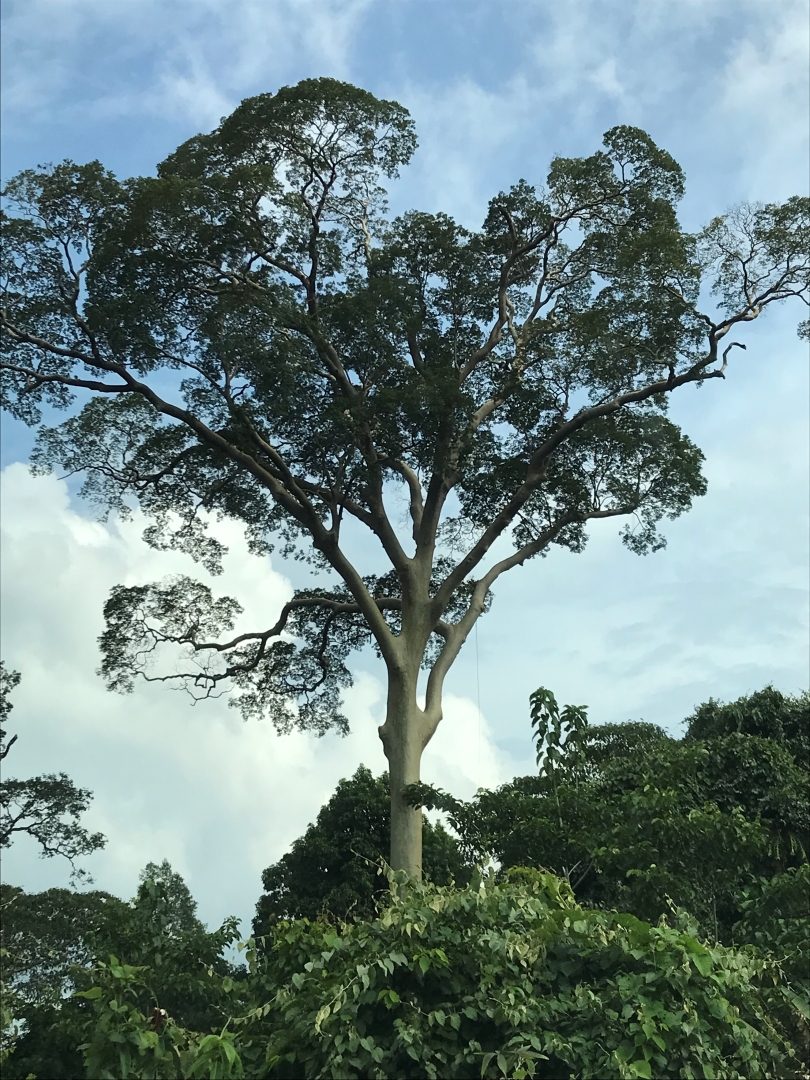 A majestic ‘tapang’ (koompassia excelsa) seen at the national park, which is home to a diverse species of flora, from those thriving in peat swamps to ‘giants’ that reach over the height of 50m.

It is extraordinary seeing the Berawans arrive at the jetty with the fish-filled ‘kurungan’ tied to their boats.

While getting ready for the trip back to Kuching, Zainudin caught a glimpse of a large squirrel, probably measuring about 1m from head to tail, climbing up a rambutan tree and then, dashing across the parking area outside the national park office.

“I wish to come back for a longer visit next time, perhaps with many more of my ‘old buddies’ from Tanjong Lobang School,” he smiled.

Previous ArticleHealth Ministry: Booster dose given according to current developments on Covid-19
Next Article ‘City in the forest’