Tuesday, February 7
You are at:Home»Columns»Nature Matters»Who actually made the first discovery of climate change?
For the freshest news, join The Borneo Post's Telegram Channel and The Borneo Post on Newswav.

THE actual word ‘climate change’ was first coined in 1880 and now, today, is recorded as ‘climate warming’ or even ‘climate heating’. There is much debate concerning the first person to recognise that carbon dioxide accumulation in our atmosphere leads to global warming. Was it a female or male scientist who first researched the heat effect of carbon dioxide emissions? Most of us have never heard of Eunice Newton Foote’s or John Tyndall’s experiments in our school science lessons. Our younger generations will, no doubt, have come across these two scientists when exploring the properties of carbon dioxide. Who are these two people behind their names and what and when did they really discover?

Born in Connecticut, USA, of a family related to Isaac Newton, scientific exploration was in her genes. Educated in a seminary, at the age of 36, she carried out a simple, but then untested, experiment with carbon dioxide, natural air, and hydrogen, by subjecting each gas under compression to reach the same temperature. Then she placed each gas in the sunlight and concluded that carbon dioxide trapped the most heat and took many more hours of cooling than the other gases after reaching a temperature of 52 degrees Celsius.

Her theory is best expressed in her own words, “An atmosphere of that gas would give to our earth a high temperature, and if, as some suppose, at one period in its history, the air had mixed with it a larger proportion than at present, an increased temperature from its own action as well as from increased weight, must have necessarily resulted.”

Her paper on ‘Circumstances affecting the heat of the sun’s rays’ was presented on her behalf in 1856 at the annual conference of the American Association for the Advancement of Science. It was delivered by Prof Joseph Henry of the Smithsonian Institute, who declared before reading her paper that, “Science was of no country and of no sex. The sphere of a woman embraces not only the beauty and the useful, but the true.”

I am uncertain as to why she did not deliver her paper to this august assembly herself for certainly women were allowed to do so, well in advance of the men only proceedings of the British Royal Society. Despite publication of her findings in American and European scientific journals and newspaper reports, Newton Foote did not receive the full acclaim for her discovery that should have been accorded to her.

The very fact that the gas, carbon dioxide, held heat for far longer than any other atmospheric gas was first discovered by her. She went on to discover vulcanised India-rubber used for the filling of the soles of boots and shoes and later developed a paper making machine, which strengthened and produced smooth paper which could tear evenly. Certainly, she was a most amazing and versatile scientist.

It is interesting to note that Tyndall, too, published a paper on colour blindness in the same issue of ‘The American Journal of Science and Arts’ as Newton Foote’s article on ’Circumstances affecting the heat of the sun’s rays’ appeared. Surely, Tyndall must have been sent a copy of that journal and I believe that her article may have prompted him to take her findings yet further.

Born in Ireland, it is thought that his mathematical skills and sense of discovery at an early age led him to becoming a teacher of technical drawing and land surveying up until the age of 19, when he gained employment as a draughtsman at the Ordnance Survey of Ireland. Three years later, he ’jumped ship’ to become an employee of the Ordnance Survey for Great Britain. This was at an exciting time for British map making when the Ordnance Survey published its first editions of maps of selected areas at a scale of 1:63,360 or one inch to one mile!

His land surveying capabilities were in such great demand so he became a railway construction planner between 1844 to 1847. A year later, whilst teaching at a Southampton school, he resigned and on his accumulated earnings took off to the German University of Marburg, which was renowned for its experimental Chemistry and Physics teaching. There he studied under Robert Bunsen for three years before returning to England in 1851.

Mountaineering was his only recreational pursuit derived from his visit to study glacier flows and how they worked on the Great Aletsch Glacier in Switzerland. There, he was a pioneer alpinist in scaling the Matterhorn in 1856 after an earlier climb of the Weisshorn in1861. His mountain climbing exploits led to glaciers in Chile and Colorado, USA and peaks in California and Tasmania named after him. 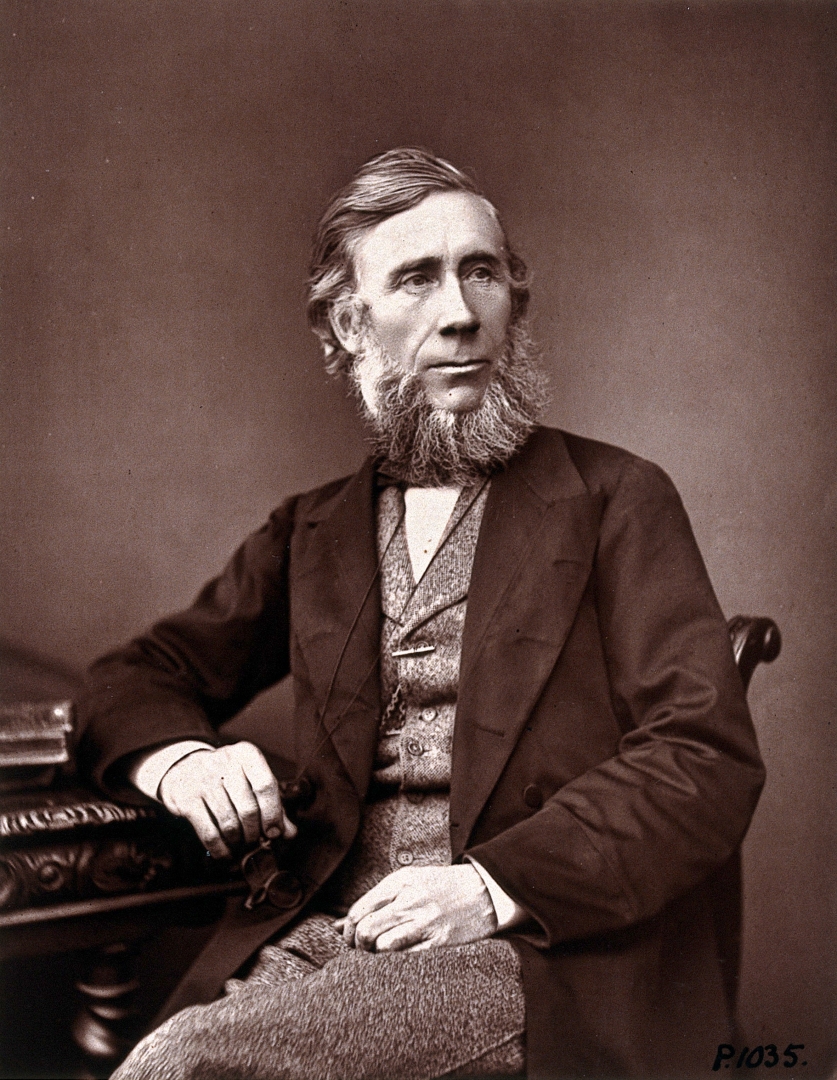 Tyndall is seen in a photograph by Barraud. – Photo from Wikimedia Commons/Wellcome Images

Early in 1859, Tyndall started his research on how gases and aerosols were affected by thermal radiation. On May 26, he sent a message to the Royal Society describing his complicated “differential absorption spectroscopy” experiments and boldly stated, “With the exception of the celebrated memoir of M Pouillet on Solar Radiation through the atmosphere, nothing, as far as I am aware, has been published on the transmission of radiant heat through gaseous bodies. We know nothing of the effect even of heat radiated from terrestrial sources.”

Whilst his measurements and calculations are indisputable, I cannot but believe that the stimulus for his research was triggered by Newton Foote’s paper some three years earlier! Undoubtedly, he was the first scientist to measure in detail the capacities of the various gases in our atmosphere to absorb radiant heat in the form of infrared radiation and are, thus, infrared emitters. This was the first proof that greenhouse gases existed on our planet and led to photochemical pollution.

Beyond this discovery, in 1884, he invented an apparatus to measure the amount of carbon dioxide in samples of exhaled human breath. The very basics of Tyndall’s system are seen in today’s hospital operating theatres for monitoring patients under anaesthesia. In 1874, he invented a firefighter’s respirator, which filtered smoke and other noxious gases from the air.

Sadly, he died aged 73 from an overdose of chloral hydrate, which he regularly took to combat insomnia. He was one of the world’s leading physicists in Victorian times and is remembered on a weathered memorial stone in the alpine village of Belap, where he had a holiday chalet near to the Great Aletsch Glacier.

Clearly, both Newton Foote and Tyndall were proactive scientists and her findings must have stimulated him to enquire more and more accurately provide calculations of the effect of infrared heat upon the gases in our atmosphere. The very fact that Newton Foote, through a simple experiment, discovered that carbon dioxide held heat far longer than other gases surely is implicit in the reasons for climate heating. Tyndall, on the other hand was the first to demonstrate and quantify that visually transparent gases are infrared emitters.

The jury is out!

Newton Foote’s case was a victory for mid-19th century women scientists expressing their discoveries in a then male dominated scientific world. It is a great pity that even today our schools’ science and geography textbooks pay scant homage, if at all, to these two scientists’ discoveries.

Since the early 18th century Industrial Revolution, based upon coal burning, climate warming has progressively been with us and we are paying the price today for the ever-increasing amounts of carbon dioxide daily pumped into the air that we breathe. The absorption of heat by water vapour and carbon dioxide has turned our weather systems topsy-turvy and we can now expect further heat waves, flooding, drought, forest fires, hurricanes, typhoons, and landslides than ever before let alone rising sea levels.