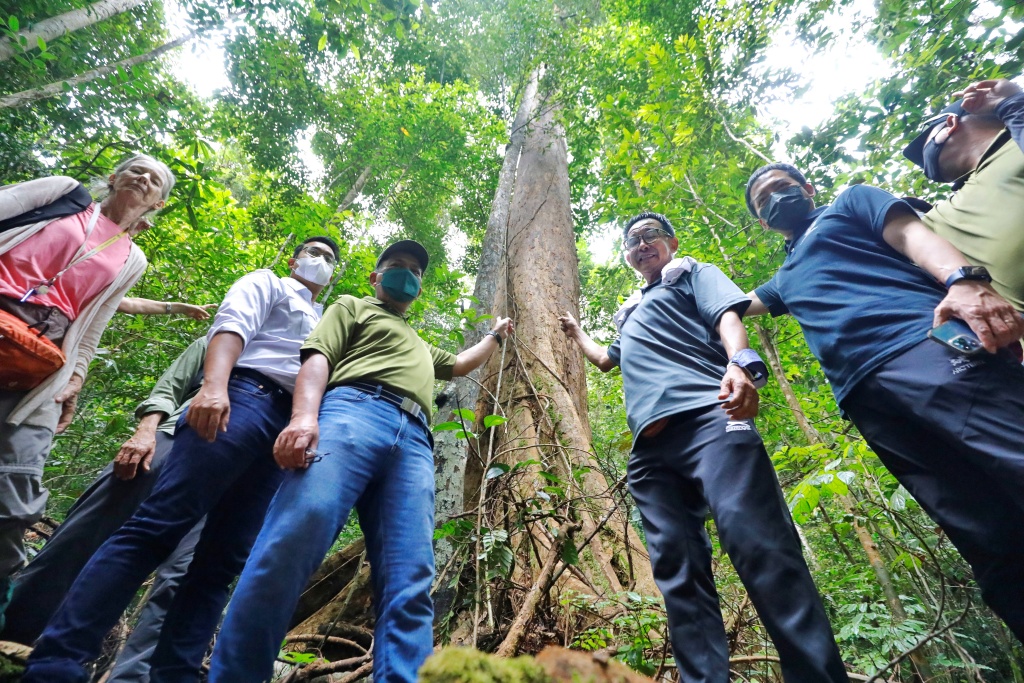 Karim (second right) and (from right) Hii, Zolkopli, Azizul and others pose in front a dipterocarps (kapur) tree during the trek along Beccari Rattan Trail. — Photo by Chimon Upon

KUCHING (Feb 19): The Beccari Rattan Trail at Kubah National Park in Matang here will be a popular place to visit for foreign tourists who love nature and jungle trekking.

Tourism, Creative Industry and Performing Arts Minister Dato Sri Abdul Karim Rahman Hamzah said it will be one of the tourism products his ministry and the Sarawak Tourism Board will promote to attract more tourists to the state.

“This place has the biggest density of palm species and I can vouch to that because in just 300 metres of our walk this morning, we can see so many types of palms — some of which are very big and the leaves are taller than a human being,” he told reporters after trekking up the trail after a launching ceremony.

On the history of the trail, he said Italian naturalist Odoardo Beccari came here over a 100 years ago and discovered this place, which was “a piece of gem” to him.

“We are very, very lucky the state government through the Sarawak Forestry Corporation and non-governmental organisations have been preserving and conserving this place for us and future generations,” he said.

According to Abdul Karim, who is also Youth, Sports and Entrepreneur Development Minister, the trail is easily accessible to people in Kuching and tourists who come to Kuching.

“With the good facilities being provided, we can attract tourists from Singapore and Europe who apart from doing some shopping and visiting the Sarawak Cultural Village, love to see nature when they come down to Kuching.

“Whether it is the waterfall, or they go hiking, this is something they cannot find back in their own country and it would be a lifetime experience for them,” he added.

As for the reopening of borders in March, Abdul Karim said his ministry would be making a study on how to increase the number of visitors to Sarawak via the Vaccinated Travel Lane (VTL).

“The first VTL was between Singapore and Kuala Lumpur and we now have the Brunei-Sarawak VTL which was just announced by the Prime Minister (Dato Sri Ismail Sabri Yaakob) when he went to Brunei.

“I have already made a suggestion that we would love to see a VTL between Singapore and Sarawak. We are looking forward to increase the number of visitors,” said Abdul Karim.