A screengrab of a video shared on WhatsApp said to be of snow on Mount Kinabalu, showing a thin blanket of snow.

KOTA KINABALU (Feb 28): Climbers on Mount Kinabalu were given a surprise this morning when snow fell over the tallest peak in South East Asia.

One of the witnesses of the phenomenon was a Via Ferrata trainer, Hajiri Sulumin, 47, who recorded a video that was widely shared.

Hajiri added further that it was a beautiful view and the snow was white, similar to snowfall in western countries.

It is understood that Hajiri was waiting for climbers at the Sayat-Sayat hut at about 7.18am when the snow begin to fall. 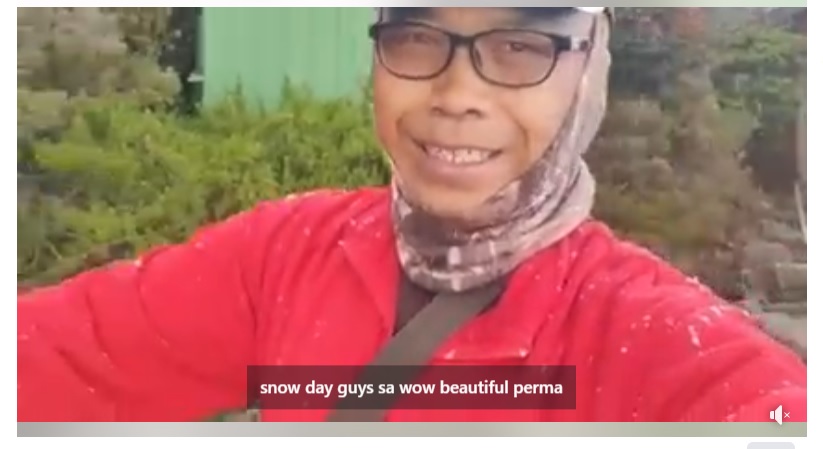 A screengrab of Hajiri in a video shared on the MOUNT TORQ Facebook page.

Although snowfall is uncommon on the mountain, it has been recorded in 1975 and in 1993.

Sabah Parks Manager Justinus Guntabid said the average temperature at Panalaban between 2am and 10am this morning was between 6.9 Celsius and 12.3 Celcius.

“But today, it is colder than other days, and so it may be even colder up there. Those who witnessed the snow can consider themselves lucky,” he said.

Sabah Meteorology Deparment director, Amirzudi Hashim, said it was not uncommon for snow or frost to form at high altitude places such as Mt Kinabalu.

However, he said this happens when the temperature drops to zero Celcius or lower and with the right humidity level.