Tuesday, December 6
You are at:Home»News»Nation»Buoyed by election victories, Zahid tells grassroots Umno is back from the dead 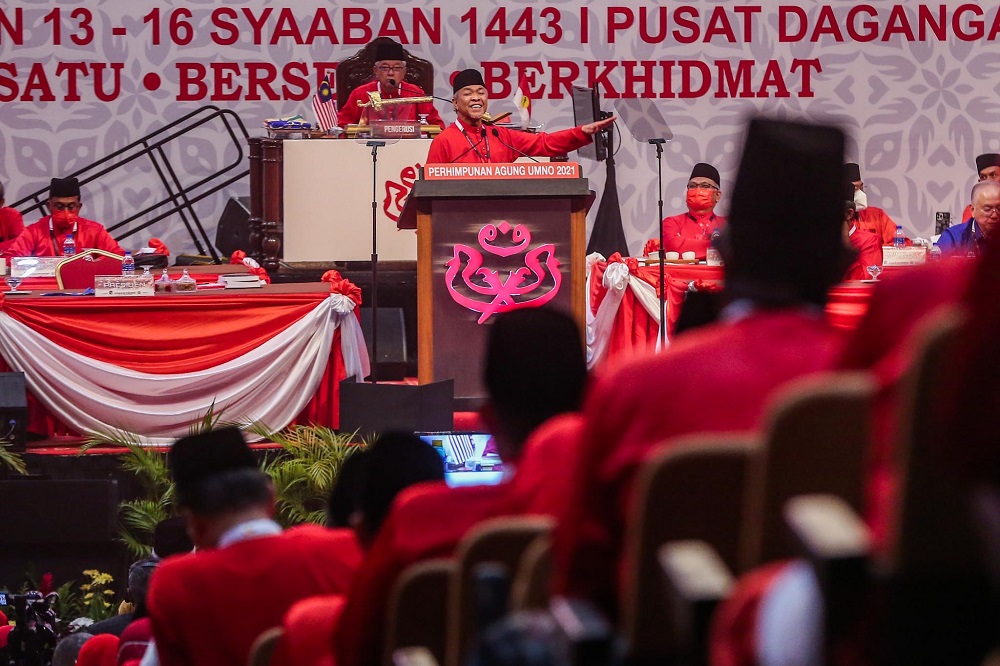 KUALA LUMPUR (March 18): Datuk Seri Ahmad Zahid Hamidi opened his party’s 2021 annual general assembly by declaring Umno as battle-ready and has emerged from the ordeal of 2018’s humiliating defeat stronger, as he urged members to prepare for the general election.

The Umno president asserted that the party’s back-to-back electoral victories were the clearest indicator of a resurgent public support, and that people continue to view the Malay nationalist outfit as the best platform for economic and social progress despite efforts by rivals to paint them as corrupt and obsolete.

Bolstered by two landslide majorities in the recently-concluded Melaka and Johor state elections, Umno has been pushing for a national election within this year confident that it can retake federal power.

The Barisan Nasional lynchpin has been on a resurgent form that pundits attributed mostly due to division within the opposition, as it managed to capitalise on the growing “political fatigue” to reinforce the narrative that only Umno can provide stability, a strategy that worked at both the state polls.

Addressing hundreds of delegates, Zahid suggested voters rewarded Umno for the loyalty of members who stuck with the party throughout difficult times.

“We must certainly remind ourselves of the episode when we lost the 14th general election. Three months later we lost in two by-elections. The wound was made deeper by the betrayal of our own friends in the party,” the Umno president said.

“They had no qualms forgetting the party’s struggle for self-interest. In fact, this betrayal spread to Sabah when 22 from the 25 Umno division leaders quit the party and its struggle. But thank god there were those who remained loyal,” Zahid added.

“This loyalty is the symbol of the faith that three million of our grassroots members have towards our cause. And it is this loyalty that fuels Umno’s revival. We then won seven subsequent by-elections and Allah’s plan was so beautiful that the change in federal power saw Umno take charge of the government.”

Zahid has hinted that the 2021 congress will seek to push Prime Minister Datuk Seri Ismail Sabri Yaakob to dissolve Parliament.

Despite talk that Ismail Sabri might try to hold off the call for election and buy time so he can consolidate his own strength until party elections are held later this year, most pundits believe that is unlikely given the strong influence of Zahid’s faction within the party.

The Umno president is one of several party leaders now standing trial for a litany of corruption and money laundering charges. Rivals have alleged Zahid is keen to hold the 15th general election soon because a strong Umno-led administration could influence the outcome of his trial.

At the AGM, Zahid suggested that the corruption charges against him and other Umno leaders were acts of political vengeance by rivals. He vowed Umno would put an end to such practices, but said the party must first secure a strong majority.

“Enforcement institutions like the Malaysian Anti-Corruption Commission were placed under a politician’s watch as the chief commissioner. But cases that involved them were all negotiated by the attorney general,” the Umno president alleged.

“All this proves that the parties that collaborated to form the government after the 14th general election are not genuine agents of change. Instead their shouts of change were merely to entice support to clinch power,” he added.

He then accused Umno’s rivals of being hypocrites because they took in party defectors despite labeling the BN component party corrupt, a reference to both Pakatan Harapan and Perikatan Nasional, the pact led by Umno’s splinter group Parti Pribumi Bersatu Malaysia.

Only Umno remains the sole party with real principles when it comes to loyalty, he declared after.

“The reality is next to Umno and BN no other parties have moral principle when it comes to party hopping or lompat katak (hopping frogs). At the Melaka state elections for example, PH took in frogs and made them candidates,” Zahid said.

“What more PN, whose anchor party is PPBM which consists of party hoppers who tried to sanctify themselves as principled frogs,” he added.

Zahid said their behaviour is akin “to a cock that crows purity but its tail is full of shit”. — Malay Mail

Previous ArticleCop found dead in Miri with gunshot wound
Next Article Dismissing Pakatan as an imposter, Zahid says Umno is the real reformist