Wednesday, July 6
You are at:Home»News»Nation»Dr Mahathir and Kit Siang standing down from politics a signal for other veteran Opposition leaders to do the same, pundits suggest 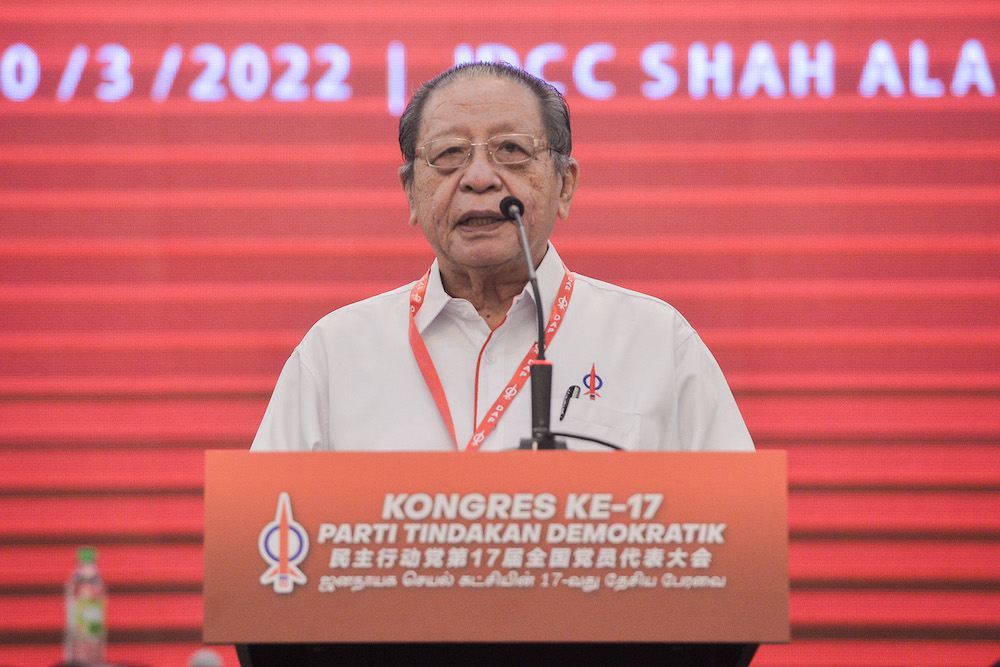 Speaking to Malay Mail, the observers said the move may be necessary to combat political fatigue and disenchantment among voters, which some have suggested led to the declining voter turnout in the last few state elections.

The professor suggested that Opposition parties such as PKR and Parti Pejuang Tanah Air are more susceptible to disenchantment as they are perceived to be led by only one personality: Datuk Seri Anwar Ibrahim and Dr Mahathir, respectively.

“Umno and PAS are political parties with several ‘old-timers’ but still able to attract voters to support them because the party’s youth wings cater to such demand, to organically replace their top leaders ― not in a robust way, but the changing is taking place incrementally,” she claimed.

Anwar’s wife, Datuk Seri Dr Wan Azizah Wan Ismail, had served as PKR’s president since 2001, before the now Port Dickson MP returned to politics and took over as president in 2018.

Langkawi MP Dr Mahathir had served as Pejuang’s chairman since its formation in 2020, and prior to that as chairman of Parti Pribumi Bersatu Malaysia since 2016 before they splintered.

Anis Anwar Suhaimi, a senior researcher at think tank O2 Malaysia, echoed Kartini’s sentiments, suggesting that parties such as Umno is not as affected as its presidents have changed several times over the decades.

Incumbent Umno president Datuk Seri Ahmad Zahid Hamidi has held the post since 2018, and is the eighth different man to hold the position since founder Datuk Onn Jaafar.

“The pressure to retire towards Anwar and Dr Mahathir is because these two leaders have lost their popularity which they received during their glory days, and it is only enhanced by Kit Siang’s retirement move as well,” she told Malay Mail.

Anis suggested that Pakatan Harapan (PH) must respond to Umno’s purported attempt to put more fresh faces in elections, such as its recent vow in its general assembly to name at least 70 per cent new candidates in elections amid the influx of new and young voters from the Undi18 Bill.

On Sunday, Lim announced his retirement from politics, saying he will not be contesting any position, whether for the party’s central executive committee today or in future parliamentary or state elections.

The Iskandar Puteri MP had served as DAP’s secretary-general, national chairman, Parliamentary leader, and national organising secretary, as well as the Opposition Leader, over the years.

His son Guan Eng, who served as DAP’s secretary-general since 2004, was also replaced by Anthony Loke by party delegates over the weekend.

Azmi Hassan, a senior fellow at the Nusantara Academy for Strategic Research lauded the announcements by Lim and Dr Mahathir, but worried that both of their legacies may still haunt the Opposition.

The professor suggested that both senior leaders have been ethno-religious bogeymen for so long by the government, that DAP and Pejuang may find it hard to wash themselves off the perception.

“I think that there is a lot of MPs or in the state assemblies, who are veterans, whose times have passed and they should give up their seats.

“Don’t have to defend their seats in GE15, so that new faces are given a chance in determining our political direction. I think we should take the positive sides of both Kit Siang and also Dr Mahathir in not defending their seats,” he said.

Dr Mahathir had early this month said that he would not be defending his Langkawi parliamentary seat, citing health reasons. He was reported saying that his party, Pejuang has also not found a successor to defend his seat.

Meanwhile, Azmi said that Umno must also look at Kit Siang and Dr Mahathir as examples, with the warlords in Umno paving way for new blood.

“In Umno there are a lot of warlords. I think these warlords in Umno should take cue from what Kit Siang and Dr Mahathir announced, and not clamour to be candidates in the GE again,” he said, adding that the Umno warlords should also reduce their influence.

Call for veteran PH leaders to step down or retire was recently intensified following the coalition’s drubbing in the Johor state election earlier this month, where Barisan Nasional won 40 out of the 56 seats.

PH won only 12, down from the previous 27. The bulk of them was won by DAP (10), with one each for PKR and Parti Amanah Negara. Ally Malaysian United Democratic Alliance (Muda) won one, while Pejuang lost all 42 seats it contested. — Malay Mail

Previous ArticleLee: Facilities at all seven lighthouses in S’wak to be upgraded
Next Article Protests in Jamaica as William and Kate visit