Tuesday, February 7
You are at:Home»Columns»Nature Matters»Discovering Angkor Wat and Danum Valley’s amazing connection
For the freshest news, join The Borneo Post's Telegram Channel and The Borneo Post on Newswav. 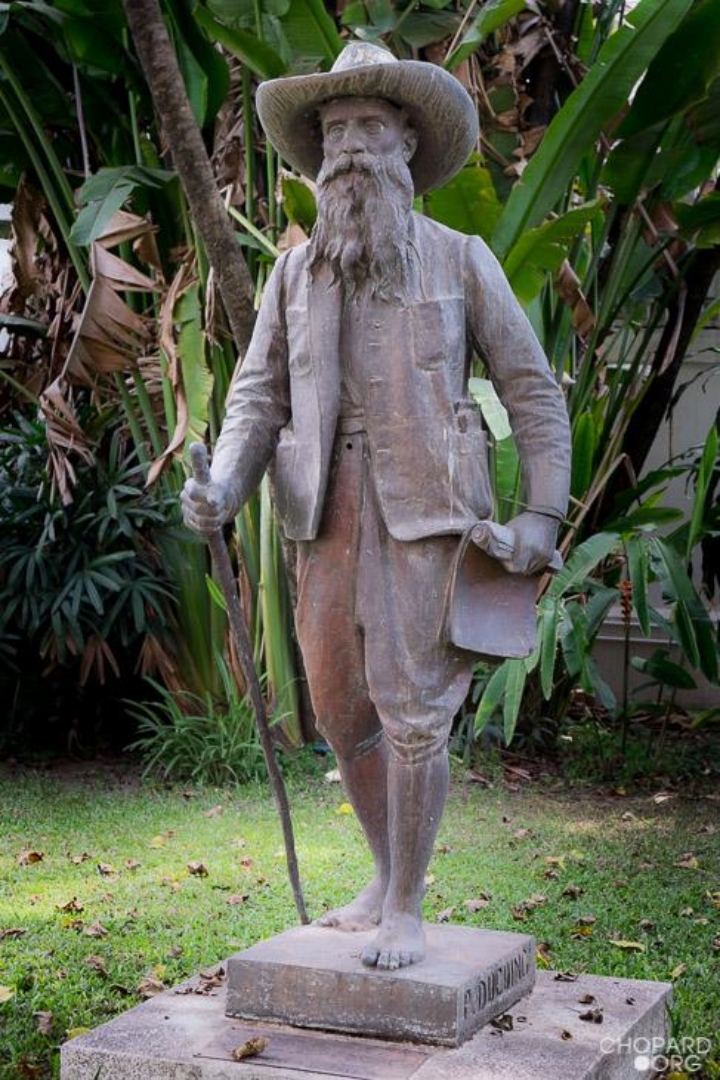 The statue at Mouhot’s grave.

THE name Henri Mouhot may well be unfamiliar to many but, to those who have had the good fortune to visit the ancient ruins of Angkor Wat in Cambodia, his name will be well known. In 1860, he rediscovered the ancient Khmer civilisation and the ruins of the ancient temples that lay silently decaying deep in the jungle. Through his diaries and letters home he brought it to the attention of the Western world.

It would be an untruth to claim he did this single handedly for previous explorers had both visited and written about them but their writings for the most part were widely ignored and it seemed this holiest of places would remain hidden forever.

Mouhot’s travels throughout the kingdoms of Cambodia and Thailand and their less well-known impoverished neighbour, Laos, are well documented not least by himself. Indeed, it is perhaps his untimely death, whilst en route to the Lao Mountains, reported in some detail in the newspapers of Europe that has kindled the interest of subsequent generations.

At the young age of 35, whilst on his fourth expedition, he was struck down with fever and within a week had died. Two of his faithful servants buried him near a French mission in Naphan by the banks of the Nam Khan River whilst his favourite, Phrai, carried his master’s journals, specimens and meagre possessions back to Bangkok, from whence they were despatched to his young widow in France.

Her husband’s unexpected death had caused her considerable hardship, as his adventures had been in the most part self-financed and her claim for a pension from the Royal Geographical Society of Great Britain fell upon deaf ears. Mouhot’s personal applications for funding for his trips had been refused on numerous occasions by many organisations.

Sir Roderick Murchison, the then president of the RGS, whilst unable to assist financially, did encourage Madame Mouhot to seek publication of her late husband’s journals in an attempt to alleviate her suffering and with his guidance the first edition was published in English in 1864. 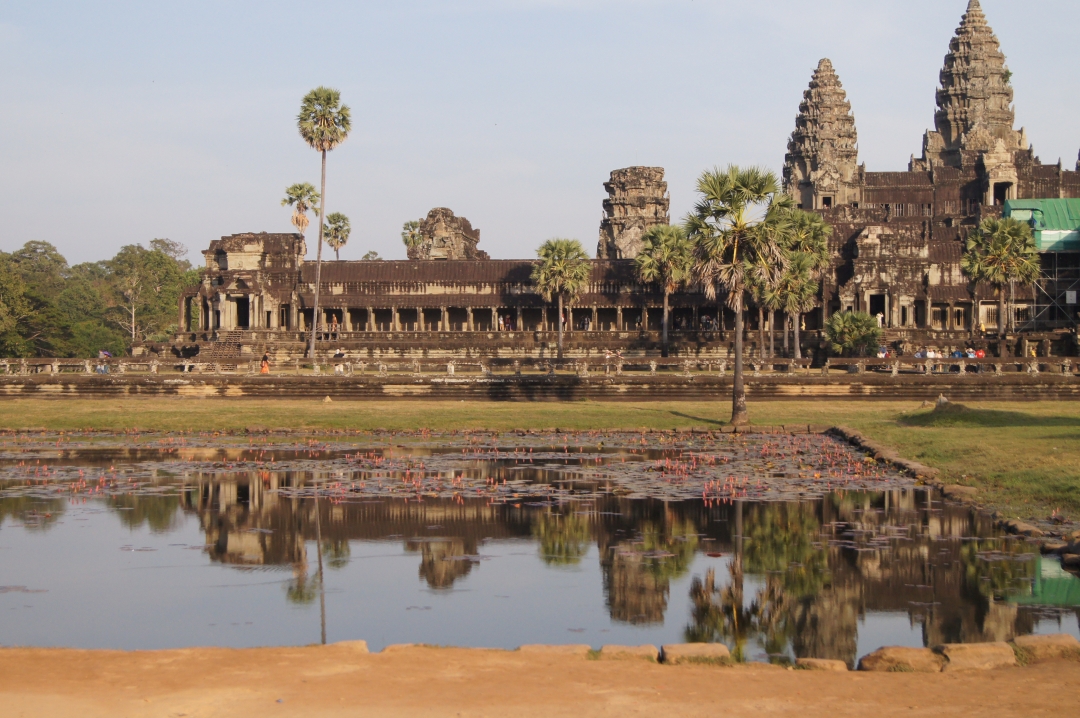 In 1860, Mouhot rediscovered Angkor Wat, the ancient Khmer civilisation and the ruins of the ancient temples that lay silently decaying deep in the jungle.

Despite Mouhot’s obituary describing him as an “explorer” he was by profession and, by his own words, “A natural historian with a passion for insects and spiders.” In fact, one of the spiders that he had collected on his trips was described as being so different to any other species that it was to be assigned its very own genus. My wife Angela and I visited Angkor Wat in 2017 and were indeed, like so many others, astounded by its magnificence and we would heartily recommend a visit if possible.

Mouhot’s diaries are of interest to all as his descriptions are truly breath-taking but, as an arachnologist, I found myself primarily drawn to a single line in his works from the description of a spider written by Dr Albert Günther in 1862. It merely states, “The spider was so extraordinary that we have not hesitated to refer it to a new genus.”

Naming it, Cyphagogus mouhotii, Günther had given a written nod to its discoverer and although it would later be reassigned as Poltys mouhotii, my interest was suitably piqued to find out more of this “extraordinary spider”.

When beginning research, it is often the case that one finds oneself diverging from the original intended path and wandering into uncharted territory. My original article had been intended to introduce the reader to this great man and to then describe his travels and natural history discoveries in and around Angkor Wat. However, as I read through his diaries, I discovered that whilst Angkor Wat may well have been his crowning glory, his arachnological findings were of greater importance to me.

I needed to find the original description, collection location, a photographic representation of the spider and above all the type of specimen. Many of you may recall that we carried out a similar investigation some years previously when we attempted to find Wallace’s spider (Friula wallacei) and despite some success the expedition had been tempered with a little disappointment.

I began my investigation by finding a copy of the original paper written in 1862. It had been published in the Annals and Magazine of Natural History under the title, ‘On an apparently undescribed spider from Cochin China’.

On checking my huge library of scientific papers that I have amassed over the last 30 years, I very soon realised that I held the paper already. I unearthed the said paper and sat back to read it. As with many of the older papers it was short and written in a very prosaic scientific style and offered little idea as to the shape and form of the spider.

I soon realised that I was actually missing a page. I had the description, but it stated that a representation of the spider could be found on Plate VII Figure A. I quickly found a copy of the said plate on the Internet, downloaded it and printed it off. I stared at the drawing made by Günther in disbelief as it was expelled from my printer. I had seen this spider before!

Poltys mouhotii found in the Danum Valley. – Photos by Ray and Angela Hale

In 2016, Angela and myself, whilst on another expedition to the Danum Valley in Sabah, had stumbled across a spider that had been nicknamed ‘The Elephant Spider’ by the guides considering its elongated abdomen. We then proceeded to catch, photograph, and release the spider back to where we had originally found it. As it scuttled back to its treetop home, we had no idea as to what genus it belonged to, much less what the species might be. We later discovered that it was a spider of the genus Poltys.

Content that we had found something unique, we thought no more of it until 2022 when I opened the pages of Mouhot’s diary.

I discovered that the spider in the Danum Valley was the very same genus that Mohout’s spider had eventually become known as Poltys. We needed a photograph of the spider, Poltys mouhotii, hoping that it may at least bear a resemblance to our spider. The old days of research would have seen me visiting the British Library, requesting a paper, paying for the privilege, and then waiting two weeks for it to arrive. Today at the touch of a key we expect and receive instant answers. Within minutes I sat staring at a picture on my screen.

The spider Poltys mouhotii, found in 1862 by Henri Mouhot, and the spider we had found in Sabah in 2016 are for all intents and purposes identical. Mouhot’s original collection site was in the Northern Lao Mountain range near to the border of Laos and Thailand, but our spider had been found in Sabah, in a lowland forest area some 1,931km away from the original collection site.

I could not believe the amazing coincidence that a journey that had started out through a fleeting interest in a virtually unknown French Naturalist and a chance discovery in his obscure diary would end with a direct connection between this great man and ourselves. I felt a sense of personal pride and yet overwhelming sadness when I thought of this young man, dying alone in a jungle, with so much more still to offer the world.

His diaries told me that he had high expectations for more adventures and to eventually return home to his wife. It was sadly not to be. Ignoring his magnificent descriptions of Angkor Wat, he has left us much to consider as we set out on our next trip to Cambodia and Laos.

You know what they say, “In order to see you must first look” and we intend to.