Tuesday, February 7
You are at:Home»News»Sabah»Sabahan steals show in ethnic Murut dress at UK convocation
For the freshest news, join The Borneo Post's Telegram Channel and The Borneo Post on Newswav. 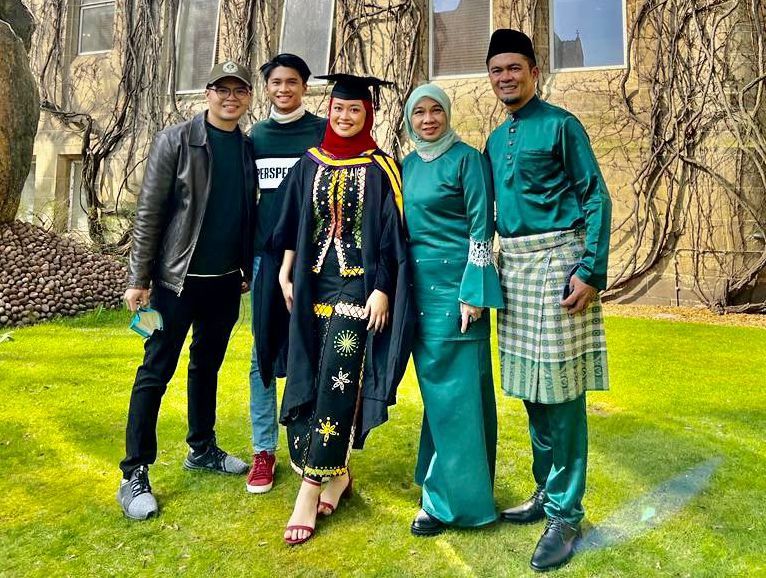 Nur Liyana Razali in her Borneo Murut Nabai ethnic dress, robe and mortar board with her family at her convocation in the UK. – Bernama photo

KOTA KINABALU (March 27): Nur Liyana Razali, a 26-year-old Sabahan lass from Papar, turned many heads when she stood out in a Borneo Murut Nabai tribal dress to receive her Master’s Degree in Engineering (MEng) from the University of Manchester in the United Kingdom recently.

The first child of three siblings of Brunei-Murut descent became the talk of the town when a picture of her dressed in a traditional ethnic dress with a robe and mortarboard while receiving her MEng scroll on March 20 went viral on social media, especially among netizens from Sabah.

Nur Liyana said she wore the motif-embellished indigenous outfit for the momentous occasion to showcase the traditions and culture of the Sabah community to foreign countries, and wanted it to be appreciated and remembered, more so by the younger generation.

“Of course, I am elated to receive a Master’s Degree, but the memories are sweeter when I can showcase the culture of Sabah in a Borneo Murut Nabai tribal dress from my mother’s lineage,” she told reporters here yesterday.

Nur Liyana, who is currently working as a management trainee at Nestle Malaysia in Kuala Lumpur also thanked the public, especially Sabahans who gave her support and encouragement.

Her father Razali Matali said Nur Liyana was supposed to graduate in 2020, but due to the Covid-19 pandemic, it had to be postponed.

He managed to attend Nur Liyana’s convocation with his wife and two other children.

“As a parent, I am very happy with Nur Liyana’s success and I thank the state government through the Sabah Foundation which gave a scholarship to Liyana,” said the 51-year-old who also made his fashion statement at the convocation in a traditional Malay ‘cekak musang’ shirt and a songkok (headgear). – Bernama