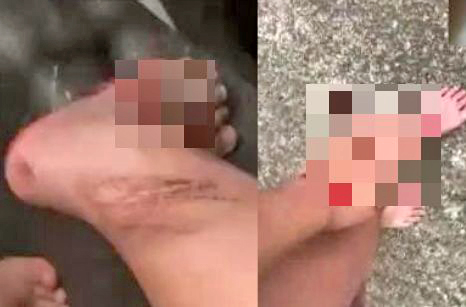 Photos of the victim’s injuries that were shared in social media.

KOTA KINABALU (March 31): A teenage girl jumped out from an e-hailing car after the driver allegedly molested and robbed her near the Kionsom waterfall along Jalan Kionsom, Inanam here on Thursday.

The 19-year-old salesgirl had earlier gotten into a dark blue Perodua Axia car to go to work in Menggatal around 9am.

Acting Kota Kinabalu police chief Superintendent George Abdul Rakman said the e-hailing driver, identified only as ‘Zahir’, had told the passenger that he had to detour using a shortcut as the main route was jammed.

“As they were near the Kionsom waterfall area, the driver allegedly asked the girl to sit in the front seat.

“Fearing for her life, the victim then did the bravest thing by jumping out from the moving car,” said George, adding that the victim suffered injuries on her hands, elbows and knees.

“The victim then called a friend for help and was taken to a hospital for outpatient treatment. She lodged a police report the same day at 1.14pm,” said George.

The incident was also shared on social media.

George said police investigation revealed that the car had a number plate that was registered to another vehicle.

Police have launched a manhunt for the suspect and anyone with information of the incident have been urged to contact investigating officer Inspector Riduan Abd Majidat at 010-514 4059 or to go to the nearest police station.