Monday, May 23
You are at:Home»Columns»Uncle DI»Gerrymandering is the name of the game 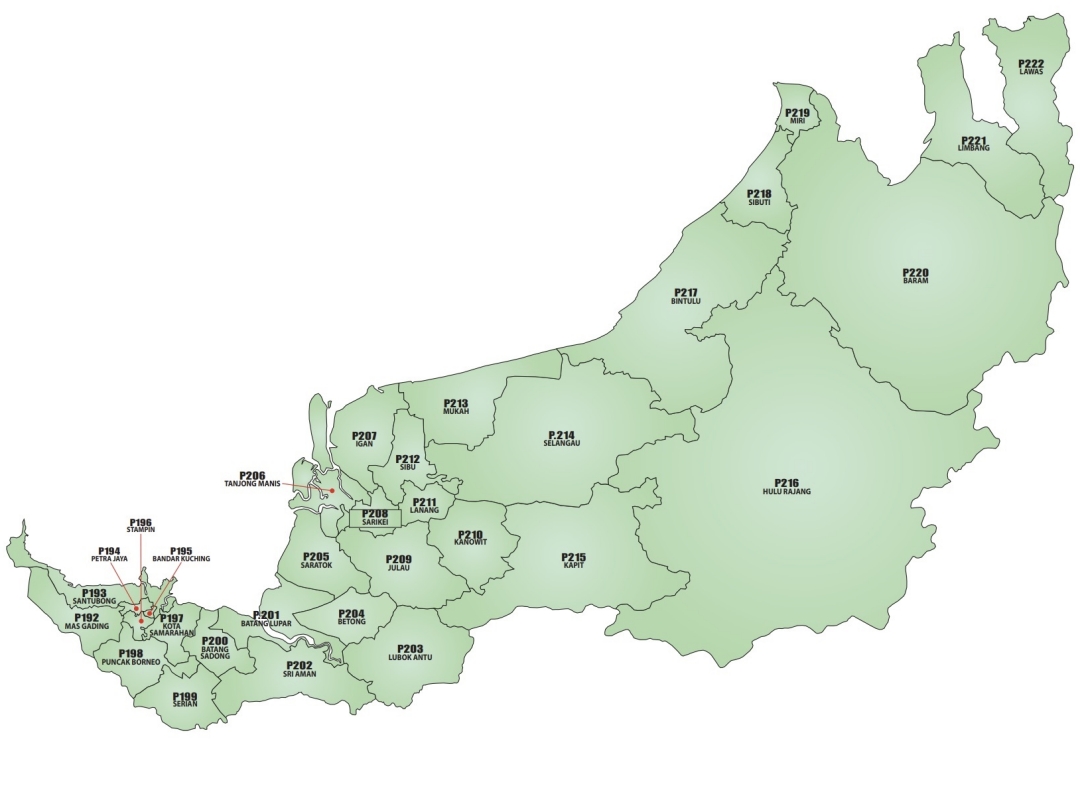 A file image shows the 2018 electoral map depicting all the parliamentary constituencies in Sarawak.

IF you are not a smart player in this game, you are out. Why? I shall elaborate later.

Apparently emboldened by and proud of the successful amendments to the Federal Constitution, thereby putting Sarawak in its proper place as an equal partner with Peninsular Malaysia and Sabah in the Federation of Malaysia, Sarawakians are talking about another demand.

Specifically, they demand that one-third of the total number of seats in the Malaysian Parliament should be allocated to Sarawak to reflect its partnership status.

As a consequence, the membership of the Senate for each partner must reflect the principle of the ‘one-third’ as well.

The Sarawak government of the day is under pressure from many quarters to start working on this demand. Assurance after assurance has been given by politicians in power that the state government is working on it. The latest assurance was given by the Deputy Minister in the Premier’s Department (Law, Malaysia Agreement 1963 and State-Federal Relations), Datuk Sharifah Hasidah Sayeed Aman Ghazali (The Borneo Post – Feb 21, 2022).

She wasn’t sure – she was quoted to have said, about the timeframe within which the state government would ‘table that demand’, adding: “If possible, before the elections.”

That means that Sarawak’s quest for a one-third share in terms of the seats in Parliament has not been ignored, let alone abandoned.

While the state government leaders are thinking about how best and when to go about ‘tabling that demand’, there are equally important moves that must be made by the activists of all political parties themselves. They should be proactive in getting the one-third share of seats in Parliament, if they do not want to go home empty-handed by entirely leaving the gerrymandering to the Election Commission.

Nor can the parties in the Opposition expect the ruling parties to do this job for them. The ruling parties have their own ideas about how to retain the seats they won in the last elections, come the next elections. They do the gerrymandering from the data collected from their post-mortem reports.

In gerrymandering, two or three tools are necessary: an electoral map, electoral rolls containing names and addresses of registered voters, and a copy of the Federal Constitution.

Those of my readers who may not have a copy of the Constitution (effective as of 2017), I have copied the following texts, for their reference:

Firstly, the relevant provisions of the Federal Constitution must be amended. And to get the Amendment Bill passed into law two-thirds of the number of parliamentarians must be present and voting.

Urge your MP to be present and vote.

As it is, the incumbent Federal Government has not got that two-thirds majority of seats in Parliament, unless the legislators on the Opposition Bench support the motion to amend the Constitution.

Secondly, equally vital is another exercise: the reviews of the present constituencies.

It is vital that the increase in the membership of the House of Representatives and of the Senate membership be approved by Parliament before the reviews of all constituencies throughout the Federation are carried out. It’s the horse before the cart, not the other way round.

Meanwhile, political parties worth their salt should not wait for the Election Commission to finally produce the electoral map.

Party activists in the state should start their own exercises on gerrymandering now with the tools listed above, if they want to be in the game of power during the next decade or decades.

Recently, I was told by a member of a political party that some activists from a certain local political party had indeed started gerrymandering. His own party, however, had not made a move in this direction.

I say that those who wait for the public display of the official reviews of constituencies and only then and there, suggest revisions or raise objections to certain data, would be wasting their time; they would have missed the boat.

By the time the electoral map is presented to the Federal Cabinet for approval, and then for Parliament to endorse, it would be too late for any party to make any correction to the electoral map already ‘neatly gerrymandered’ by the Election Commission itself.

When the electoral map is being displayed to the public, the game is as good as over. Repeat, you would have missed your bus.

Many election results are decided on the drawing table of the Election Commission. Several election results can more or less be predicted before the casting of the actual votes, believe you me.

Doesn’t this remind you of the ‘Battle of Waterloo’? That Battle was won on the playing fields of Eton.

Party activists who start collecting data from the post-mortem results of the recent elections and who are drawing the electoral map of each constituency now – and their submissions are acceptable to the Election Commission – would have an advantage over their opponents who rely entirely on the map drawn up by the Commission.

Your MP would be forced to accept the map distributed to the members of Parliament. By then, his or her constituency could have been chopped off into several parcels, either to make him or her win or lose come election time.

You would be sorry that you did not realise that the electoral map produced by the Election Commission and as approved by government, was among the main reasons why your MP did not win again.