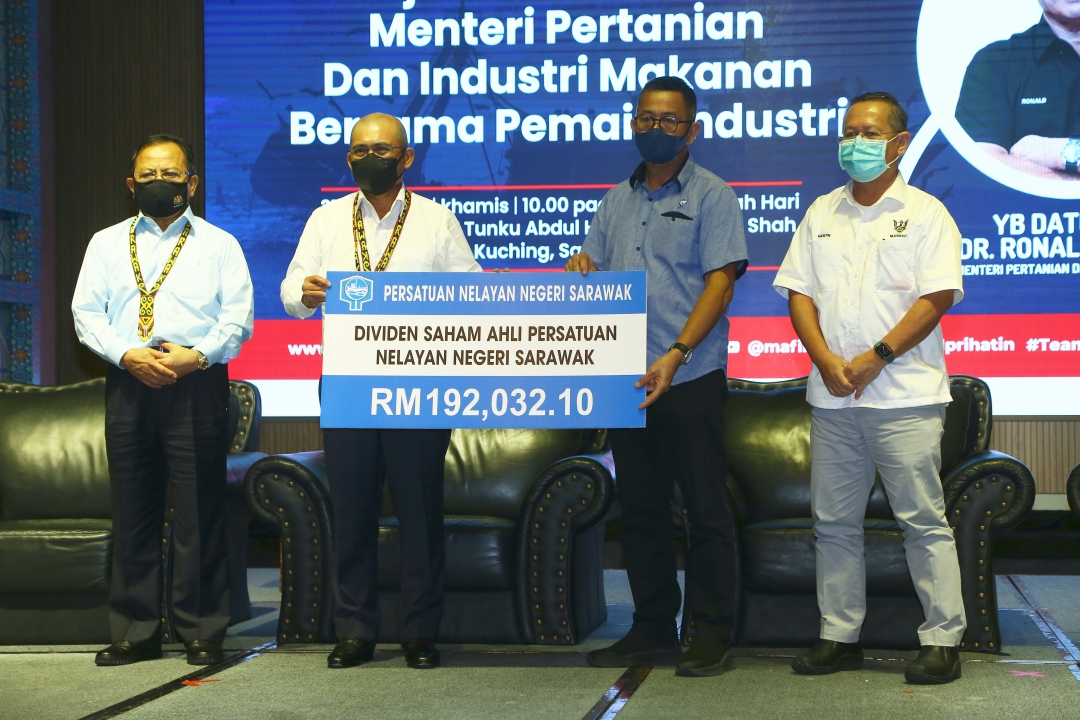 Ronald (second left) presents a mock cheque for RM192,032.10 to a PENESA representative during the event. Also seen is Sarawak’s Deputy Minister for Modernisation of Agriculture and Regional Development II Maclaine Ben (right).

The visit was regarded as very important for the national agro-food sector in line with the planning and direction of the Ministry of Agriculture and Food Industries (Mafi) through the National Agro-Food Policy 2021-2030 (DAN 2.0).

Ronald’s inaugural visit to the state kicked off on Thursday with a courtesy call on the Premier of Sarawak Datuk Patinggi Tan Sri Abang Johari Tun Openg at Wisma Bapa Malaysia here, where discussions touched on several issues, including food security and involvement of the private sector in helping the government develop the agro-food sector.

In a press conference on the same day, Ronald said his ministry had set an allocation of RM150 million to develop the agro-food sector in Sarawak.

He added that the allocation would be channelled to various departments and agencies relevant to the agro-food sector, set to benefit sub-sectors such as plantation and livestock breeding.

“One of the things that the federal government wants to achieve is to see the agro-food sector be modernised and efficiently managed, and at the same time, for it to be using the latest technology towards reducing cost of operation and dependency on imported goods, as well as increasing productivity,” said the federal minister.

Also on Thursday, Ronald attended the ‘Mafi Luncheon Talk with Industry Players’ held at Dewan Majma’ Tunku Abd Halim Mu’adzam Shah here, where he had a dialogue with industry players in the agro-food sector covering fisheries, crops, livestock sub-sectors and the entire agro-food chain including other departments and agencies with interest in the agro-food sector.

The luncheon talk was aimed at strengthening the National Food Security Agenda through ideas, views and suggestions put forth by industry players towards the direction of the agro-food sector, especially in relation to food security in line with current needs.

One of the key points that Ronald had brought up was that the reopening of the country’s borders on April 1 would further boost its agro-food industry.

“There were restrictions imposed on restaurants, cafés, hotels, and other establishments, but with the reopening of the country’s borders lockdown following the Covid-19 pandemic outbreak in the country, I believe that the agro-food sector will indirectly benefit from it.”

On Friday, Ronald made a trip to Batang Lupar Integrated Agricultural Area (IADA) for a tour of the Stumbin and Tanjung Bijat rice cultivation sites in Sri Aman, about 190km from here. 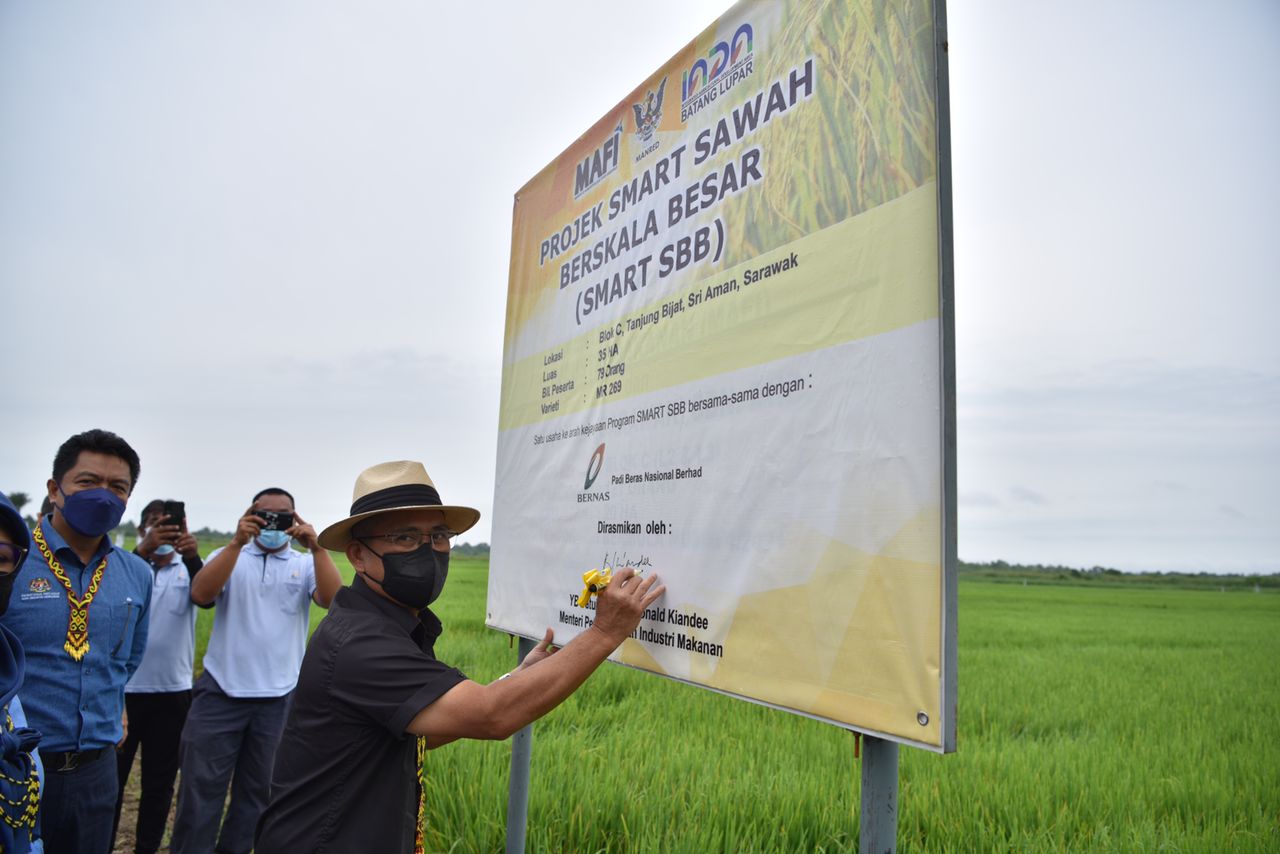 Ronald puts his signature on a banner to mark his visit to the SMART SBB site at Tanjung Bijat in Sri Aman.

He visited the Smart Paddy Field Programme (Smart SBB) site, where he described the programme as ‘being expected to increase farmers’ income up to 50 per cent through complete infrastructure facilities and farm mechanisation’.

“Until March 2022, the Smart SBB programme in Sarawak is being implemented under the supervision of the Batang Lupar IADA, in collaboration with Advansia (Sarawak) Sdn Bhd, involving an area of ​​60 hectares in L2 and L3 Tanjung Bijat, Sri Aman for the main season of 2021 and off season of 2022.

“The programme involves a total of 245 participants for both seasons,” he said.

Ronald expressed his hope that more industry players, especially the ‘syarikat peneraju’ (leading companies) under the Smart SBB programme, would come forward and bring new ideas and innovations so that such programmes could be developed not only for paddy, but also other crops.

He also witnessed the exchange of memorandum of collaboration (MOC) documents between Mafi and Syarikat Padiberas Nasional Bhd (Bernas) for the operation of Stumbin Certified Paddy Seeds Production and Processing Centre (SPPC).

“It is also my hope that this strategic collaboration between Mafi and Bernas would make the paddy and the rice sub-sector in Sarawak more competitive along the industry chain.

“Mafi also supports the aspirations and efforts of the Sarawak government towards modernising the agricultural sector for the production of lucrative paddy for local consumption, and reducing dependence on rice imports,” he said.

On Friday, Kiandee attended a dinner reception held at a hotel here, where he was cited to have said that a special committee would be established for regular official meetings for better cooperation between his ministry and Sarawak’s Ministry of Modernisation of Agriculture and Regional Development (Manred) to tackle challenges in ensuring food security.

He said this was a result of discussions with Manred minister Dato Sri Dr Stephen Rundi Utom, who was also present at the event.

“There is need for involvement and engagement between the ministry at federal and state levels. Such engagement is not just once, but we need to meet more often.

“That is why we have come to a decision to form a special committee consisting of officers from Mafi and Manred. We will continue to work together in finding the best ways to ensure the country’s food security,” said Ronald. 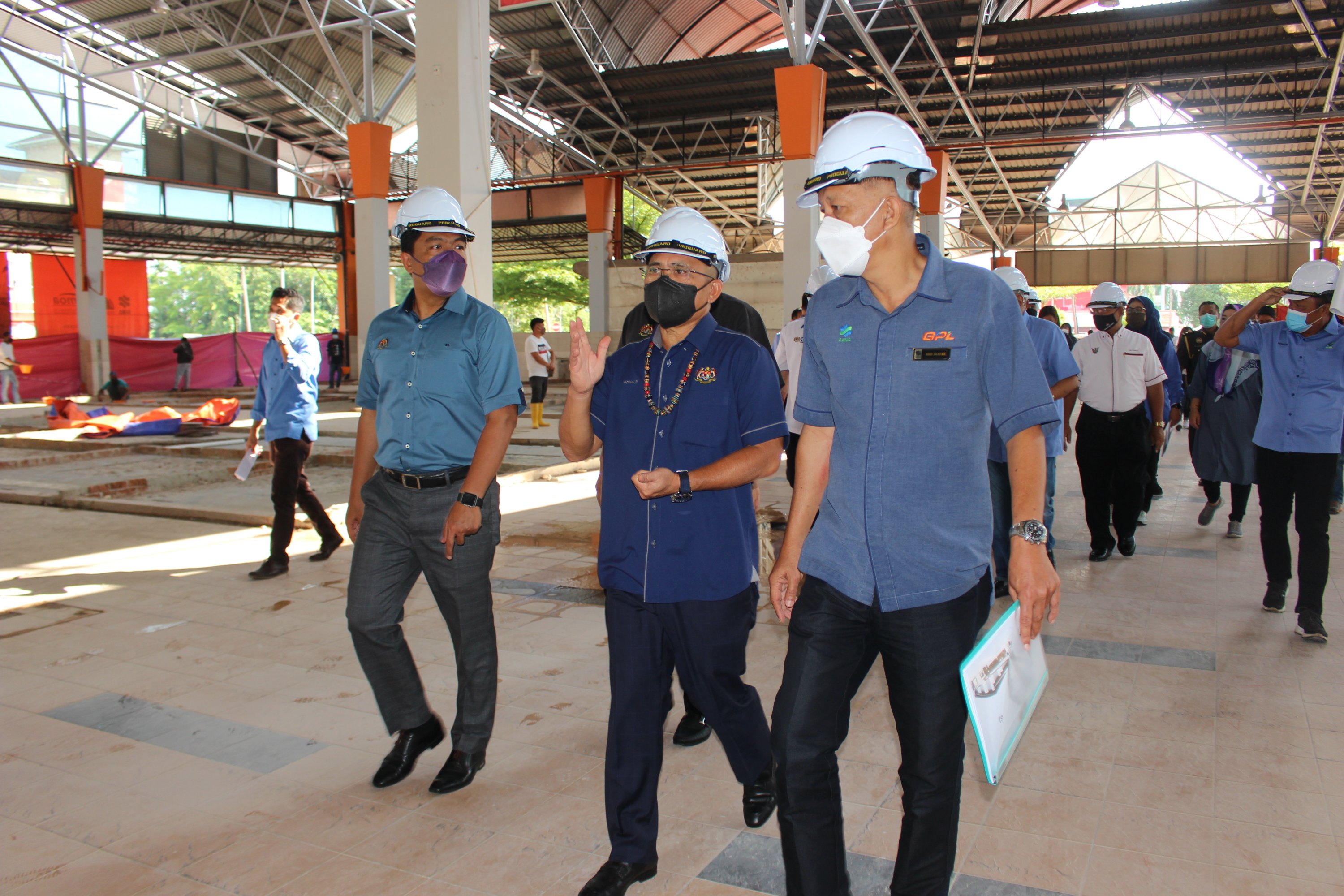 The federal minister wrapped up his three-day working visit to Sarawak with a walkabout at the popular Medan Niaga Satok here yesterday morning to inspect the progress of the ongoing upgrading works there.

It is stated that the market is currently undergoing renovation and improvement works carried out by Federal Agriculture Marketing Authority (Fama) and the Sarawak government.

“The state government has, in fact, contributed RM7 million for the upgrading works on Satok Market, and this reflects the close working relationship between the state and federal governments.

“Fama will also be carrying out improvement works on the markets located throughout Sarawak, with another RM7 million having been earmarked under the 12th Malaysia Plan (12MP) to upgrade 15 markets in the state.

“Fama will continue to play its role as a marketing agency to support the agro-entrepreneurs in creating a friendly business environment for all stakeholders involved,” said Ronald, as he pointed out that the renovation works on Medan Niaga Satok would be conducted in stages, with the multi-storey parking building and Block C scheduled to finish their construction soon.

Previous ArticleJudge moves Rosmah’s corruption trial to May 12 for mention, fix decision date
Next Article After years of being stateless, High Court recognises Klang-born man with Malaysian-Filipino parents as citizen