Wednesday, August 10
You are at:Home»News»Sabah»Jeffrey: Federal payment too small and must not replace 40 pct grant 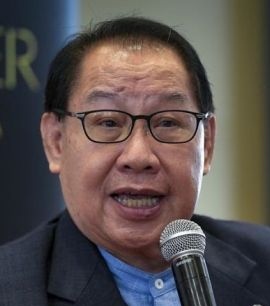 TAMBUNAN (April 15): Parti Solidariti Tanah Airku (STAR) considers the increased annual Special Grant of RM125.6 million to Sabah too small compared to what the state is entitled to.

On top of this, party president Datuk Seri Panglima Dr Jeffrey Kitingan insists that the payment should not be regarded as a replacement for the Special Grant due to Sabah which is 40 per cent of the net revenue derived by the federal in the state.

“This is our right under the Federal Constitution. This increase, which is more than four times the current payment of RM26.7 million, should not jeopardise our efforts to assert our constitutional rights,” he said in a statement here on Friday.

He said the RM26.7 million had remained stagnant for the past 49 years (since 1973) due to the failure to have the financial review every five years.

The deputy chief minister said the Sabah government and the federal government must conduct formal financial reviews every five years as required by Article 112c and 112d of the Federal Constitution.

Sabah will receive RM125.6 million in special annual grant from the federal government this year, which is almost a five-fold increase from RM26.7 million paid to the state previously.

The amount of the special grant to the state will also increase each year for the 2023 to 2026 period, according to a rate mutually agreed by both the federal and Sabah governments.

However, he said in the absence of the reviews – the first review formula (of 7.5% yearly increment) – could have been applied which would result in a payment of about RM900 million today.

But Jeffrey suggested that despite the increase, the amount received by Sabah was still too small.

However, he agreed that it is a significant improvement over the Sabah’s previous allocation of RM26.7 million which the region has been receiving since 1973.

He also reiterated his position that the federal government should not drag its own financial problems into the mix.

“The federal government has already collected 100 per cent of their net revenue in Sabah. They should know that for every RM1 collected, they should set aside 0.40 for Sabah. However, this has not happened.

“The federal government is concerned about its financial position. What about Sabah’s financial needs? Be fair to us,” he said.