Monday, May 16
You are at:Home»News»Sabah»Sabah Students Consultative Council conference in KK next month 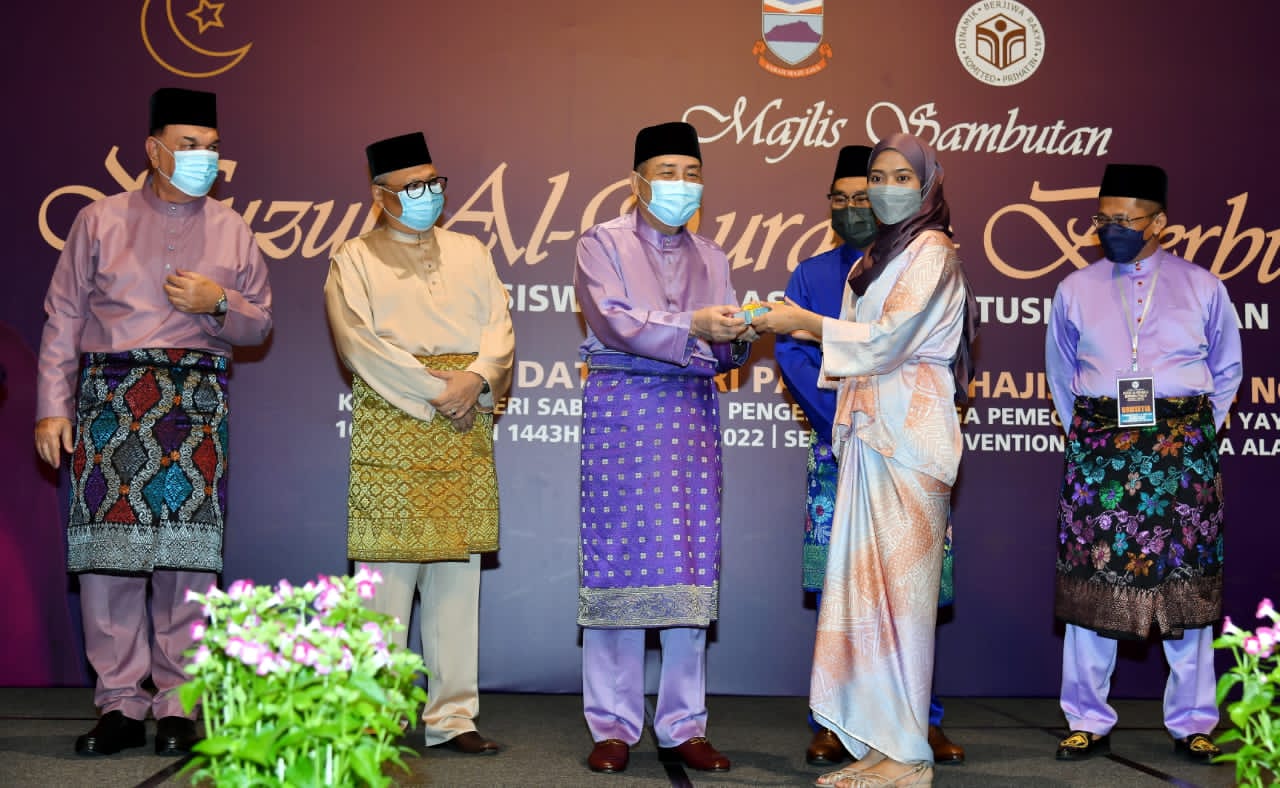 Hajiji presenting the head of Persatuan Mahasiswa Sabah Universiti Malaya, Nurul Farhani Abdullah with a donation during the Nuzul Al-Quran Celebration and Breaking of Fast ceremony with the Sabah Chief Minister at the Setia City Convention Centre, Setia Alam on Monday.

Chief Minister Datuk Seri Panglima Hajiji Noor said the conference is being organised by the Institut Kerjasama Kerajaan dan Rakyat and the Chief Minister’s Department in collaboration with the Sabah Special Tasks Minister Office as well as the Sabah Youth Council.

He said the conference that will see top state government leaders in attendance will bring together the public and private higher learning institutions’ student leaderships from all over the country.

“Participants will be divided into seven clusters namely Education and Career; Environment and Green Sustainability; Youth, Sports and Recreation; Youth
Economics and Business; Agriculture and Tourism; Leadership and Human Capital Development as well as Science, Technology and Innovation.

“Apart from top state government leaders, officials from relevant ministries, departments and agencies will also be on hand to listen to the voices and aspirations
of Sabah undergraduates and students from Peninsular Malaysia, Sarawak and Labuan.

“Hopefully, the conference will be an important platform for young Sabahans to voice out their opinions and aspirations in ensuring the success of the Hala Tuju Sabah Maju Jaya (SMJ) development plan,” he said at the Nuzul Al-Quran Celebration and Breaking of Fast ceremony with the Sabah Chief Minister attended by more than 1,000 Sabah undergraduates at the Setia City Convention Centre, Setia Alam here on Monday.

At the ceremony, Hajiji who is also Yayasan Sabah Board of Trustees Chairman, said the State Government through the Yayasan Sabah Group has also approved the
establishment of the Sabah State Education Fund (TPNS) so that more Sabah children will get assistance.

“This is in line with the TPNS’ main objective, which is to help ease the financial burden of young Sabahans. With the establishment of TPNS, the Sabah state government
wants more sponsorship opportunities to be channeled to Sabahan children who have successfully gained entry into institutions of higher learning,” he said.

At the same ceremony, the Chief Minister also announced the setting up of a Special Secretariat as the umbrella body for all students’ associations in Peninsular that will be placed under the purview of the State Special Tasks Minister.

“The graduates are our next echelon leaders who will be catalysts of the Hala Tuju SMJ thrusts. In driving Sabah’s development, human capital has been outlined in the
Hala Tuju SMJ as an important factor in creating a knowledgeable and progressive generation.

“Therefore, I call upon our Sabah children to learn more and broaden their knowledge. Seize the opportunity to gain knowledge and return home to serve our beloved state. I hope that upon completing your studies all of you will come back to Sabah and help the government implement the Hala Tuju SMJ successfully,” he said.

“From 1967 until 2021, the Yayasan Sabah Group continues to provide assistance through scholarships, bursaries and education loans. A total of RM650.8 million have been spent to help 40,222 Sabah students to further their studies in various fields
either locally or abroad,” he said.

“The State Government through the Special Tasks Minister’s Office has also launched BUDI, a cash assistance programme for IPT registration. The State Government will also give special recognition for outstanding Sabah students at the national and international level known as the Sabah Education Excellence Award (AKSA),” he added.