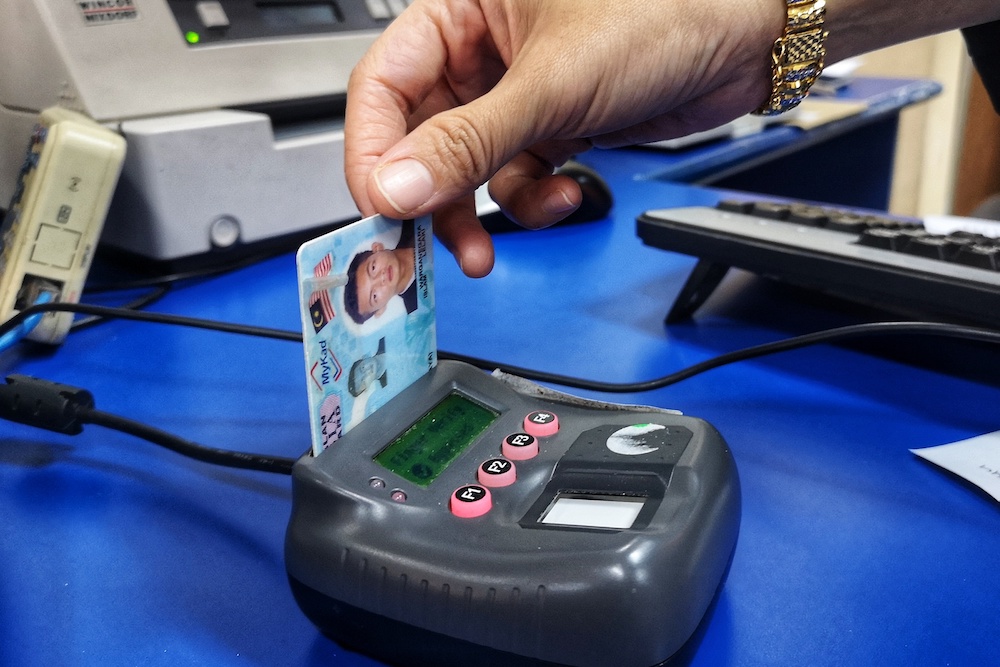 A MyKad identification card reader in use at a POS Malaysia outlet in Bangi October 15, 2018. — Malay Mail photo

KOTA KINABALU (April 19): Scammers have reportedly tried to take advantage of foreigners here by offering identity or data cards at a cost of between RM400 and RM2,500 per person.

Sabah Suhakam head Jasmih Slamat said that it received reports today that groups of undocumented migrants had been issued “humanitarian cards” and “temporary registration cards” and were told these were part of a government registration system.

“Some parties have already begun to scam people by preparing such cards. We were asked whether this was genuine or not. Some were charged RM400 per person for this card.

“We think this is an ongoing scam to take advantage of people who are desperate to get documented in order to search for jobs and make a living here,” he said to reporters after a press conference here.

It is believed that the groups, sometimes in the guise of non-governmental organisations, are beginning to go into villages in Sabah where migrants try to maintain a low profile to avoid detection by authorities.

“We don’t know how far this operation goes yet, but maybe they have worked the city. We want people to be aware of such activities and lodge police reports,” he said.

Jasmih said that Sabah Suhakam was aware that undocumented migrants were often reluctant to go to the police and had to bear the cost of the deceit themselves.

“We have made a police report of the issuance of such cards, and were told that the police were looking into it,” he said.

The Home Ministry had in February mooted a proposal to issue “foreigner identity cards” to long staying foreigners in Sabah in a bid to resolve Sabah’s perennial illegal immigrant or stateless community problems.

It has yet to be implemented.

The idea to regulate the undocumented community has been a decades-long issue, with each government struggling to push its idea through due to political and society resistance.

However, the problem remains unresolved and the complex community of undocumented people in Sabah has grown and impacted the social economic structure as well as the demographics of the state.

Earlier, Suhakam commissioner Jerald Joseph told reporters that the bulk of complaints received by Sabah Suhakam were regarding the issue of citizenship and statelessness.