Sunday, January 29
You are at:Home»News»Sabah»Volunteers send food, medical kits to Nabawan villagers
For the freshest news, join The Borneo Post's Telegram Channel and The Borneo Post on Newswav.

Food and medical kits for the villagers.

KOTA KINABALU (April 19): For generations, villagers in Kg Pengaraan Nabawan have had to walk for miles to access basic necessities and healthcare.

When The Borneo Post shared a story about teachers braving a 30km muddy road in Nabawan for the sake of providing education to the pupils in the interior on April 8, it caught the attention of several volunteers including doctors who recently visited the village bringing food and medical kits.

Zazila Roslan, who initiated the mission after her posting on Facebook went viral, was in shock after knowing many untold stories from the indigenous community.

“After the story about teachers walking on foot for 18 hours to reach the primary school of Kg Pengaraan due to bad road condition went viral, NGOs and four-wheel clubs contacted me about their willingness to send food.

“The journey from April 15 to 17 was also joined by four medical doctors led by Dr Heykarl Edziss from Queen Elizabeth Hospital who also performed a minor surgery on one of the villagers who had an ear infection.

“I could not believe hearing stories from them. There was a mother who delivered her baby alone, a kidney patient who was supposed to be treated regularly gave up on his appointment, a man with bone fracture let the pain heal itself and there were also several individuals without documents, including children,” she said.

According to Zazila, three old bridges connecting Nabawan town to Kg Pohon Batu and Kg Pangaraan which collapsed on the same day on March 5 this year, was the worst incident for the villagers.

Before the three bridges collapsed, it was already hard for the community to go to town due to the existing road condition.

“Before the bridges collapsed, villagers are depending on people with four-wheel drives to bring them out to the town.

“However, not everyone can afford to go out. That was the main reason why many villagers are not getting proper medical attention because walking for miles to seek medical attention will only add to the sickness.

“Just imagine a pregnant mother has to walk 30km for weekly assessment. No wonder they decided to give birth alone.

“When I spoke to the village head, he claimed that there are many agriculture produces they can grow in the village but it is not easy for them to bring them out to the town due to the road condition. I feel sorry for them. They don’t deserve this kind of hardship,” she added. 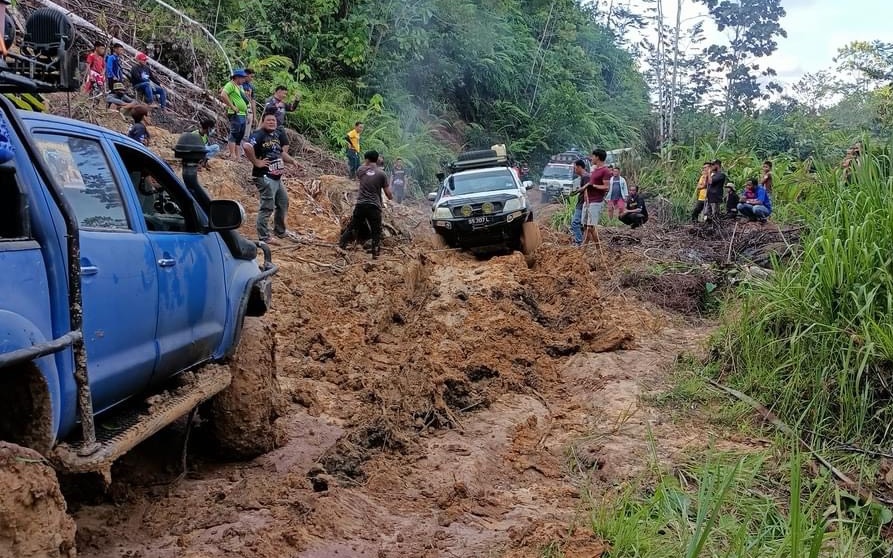 Condition of the road.

She also expressed her appreciation to the doctors for their service and kept their spirit high although there was an accident on the way.

“During the trip we experienced many challanges, including punctured tyres and a car flipped over. It was meaningful yet teaches me many things.

“I am hoping the road will be maintained to allow more prople of Nabawan to claim their rights for better access to healthcare, better economy activity and even better education,” she added.

Recently, Pensiangan member of parliament Datuk Arthur Jospeh Kurup said he had discussed the issue with the District Office and the district engineer on the collapsed bridges.

New replacement of bridges has been applied and waiting for reply from the government.

However, there was no further information on the road maintenance.