Monday, May 23
You are at:Home»Columns»Nature Matters»Castles in the air and optical effects

A coastal vessel floating in the air off the sea at Falmouth beach in Cornwall in March 2021. – Photo by David Morris/Apex

WHAT is a ‘Fata Morgana’? Those who watch the popular English TV program ‘Merlin’ may gather a clue! Morgana, in folklore, was the evil sorceress and half-sister of King Arthur and she lived in a crystal castle under the sea as well as creating extensive cities, full of ruined castles, churches, obelisks, and monuments. She was alleged to be the mistress of the fairies of the salt sea and controlled the Sirens in the Strait of Messina, separating Sicily from Calabria in mainland Italy.

She was also associated with Mount Etna, and the Sirens lured sailors to their untimely demise from the result of shipwrecks. Many sightings of the Fata Morgana atmospheric phenomenon have been recorded in the Straits of Messina and I hoped to experience such on my hydrofoil journey from Messina to the mystical island of Vulcano four years ago. No such luck!

I did encounter a Fata Morgana, whilst on a ship sailing from Madagascar to Mombassa (Kenya) in the Indian Ocean and hundreds of kilometres from land, about 23 years ago. It happened at about 9pm as I was sitting out on the deck in the stern of the ship enjoying the warm night skies. Suddenly a monstrous ship seemed to be bearing down on us out of the skies! This ghostly illusion was in the form of a giant oil tanker bearing down on my ship at incredible speed – I can still see this ship today in my mind’s eye!

Fate was about to overwhelm me, and I shouted to the crew who nonchalantly waved their hands and pointed upwards to the heavens. This illusion lasted for some two to three minutes and then mysteriously vanished. Little then did I know, even as a meteorologist, about a Fata Morgana.

Mirages in the sky

A Fata Morgana is an optical phenomenon, usually occurring in steep thermal inversions. A thermal inversion occurs when a layer of warmer air overlies a layer of cooler air. The temperature, as one rises from ground level, increases rather than normally decreasing with altitude. It was calm weather in the Indian Ocean and the huge ship illusion occurred when rays of moonlight bent when passing through layers of different temperature, in an atmospheric duct which acted like a refracting lens. The relative warmth of the sea in a warm ocean current contrasted sharply to the coldness of the night air.

It has become apparent that the vast ship which bore down on my small ship was in a place where two airmasses met and behaved like a mirror bending moonlight and thus creating an amazing and realistic image of a super oil tanker which was in fact several kilometres away and hidden under the curvature of the earth. This is what is known as a ‘superior image’.

In March 2021, an amateur photographer on a beach at Falmouth in Southwest England managed to ‘shoot’ a superior image of a coastal vessel which seemed to be the correct way up but ‘floating in the sky’.

An explorer and whaler captain, William Scoresby, whilst surveying the coastline of Greenland in 1822, observed a similarly strange atmospheric phenomenon; that of a ship sailing upside down in the sky. The actual ship was his father’s ship following 50km behind and below the horizon. Many hours later his father’s ship appeared over the horizon and intact! Scoresby did not regard this as ‘the supernatural’ as he appreciated that Arctic air could create illusions by the refraction of light on contrasting colder and warmer layers of the atmosphere.

He religiously recorded in his ship’s log, “There are several phenomena of the atmosphere caused by refraction. Objects seen on the horizon seem to be lifted above it (by several tens of metres) or so far extended in height above their natural dimensions. Ice, land, ships, boats and other objects, when thus enlarged and elevated are said to loom!”

In 1818, Sir John Ross was fooled by a superior image in his search for the then Northwest Passage between the Atlantic and Pacific oceans. He was sailing in Northern Canadian waters, but his way was blocked by ‘mountains’ looming up above his near horizon. He assiduously plotted these mountains on his charts and named them the Crocker Mountains. Ross returned to the UK and dutifully reported that no passage existed.

Ross’s second in command, Captain Parry was less convinced and in 1819, in his expedition he sailed right through the so-called Crocker Mountains to discover the Northwest Passage. These mountains never existed. Many such features such as islands and mountains were plotted on early navigational charts to be erased by 20th and 21st century satellite imagery. It is now proven that such optical illusion places do not exist.

The most stunning optical phenomenon is the rainbow, produced in daytime when sunlight passes through water droplets or ice crystals in the atmosphere. A common effect is that of the rainbow observed from the ground when we see only the arc of the rainbow rather than the circle it forms. Because light travels more slowly through water than through air it causes it to be refracted, or bent, as it passes from one to the other. When light passes through raindrops each of its wavelengths – or colours – is refracted by the drops at a slightly different angle, from red at the lowest angle through to violet at the highest. Some of the light is reflected off the back of the raindrop where the water’s surface tensions act like a mirror, and this reverses the order of the spectrum.

Secondary rainbows often called ‘rainbow hats’, can form outside of the brighter primary rainbow. The colour sequence is reversed as the light has been reflected a second time in the raindrop. 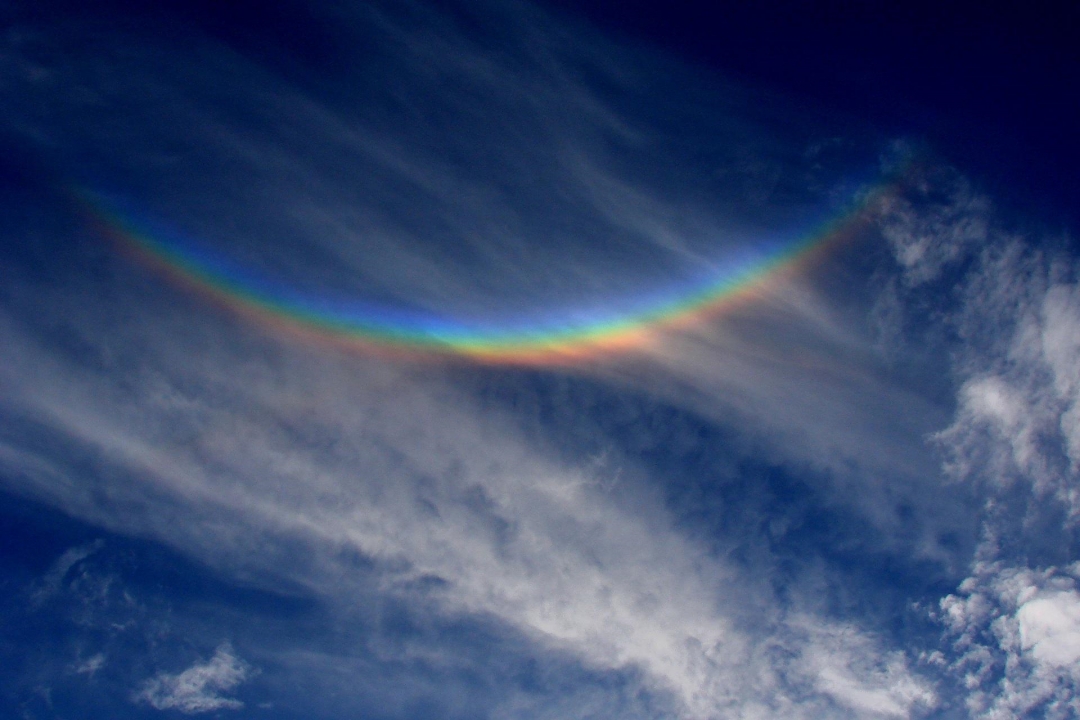 These arcs often appear as an ‘upside-down, rainbow, when the Sun’s rays are refracted inside small, flat, six-sided ice crystals suspended high in the sky, usually in cirrus or ‘mare-tail’ clouds. This projects an arc in the sky which, if complete, would circle the sky directly overhead. They usually form no more than one-quarter of a circle.

These circular optical phenomena are produced when either light from the Sun, or sunlight reflected by the Moon, passes through ice crystals in the atmosphere. The light is refracted by ice crystals in high-level cirrus clouds, creating the effect of a ring of light around the Sun or Moon.

Light is diffracted (its direction is deflected) when it passes around the edge of objects such as water droplets in a cloud. This produces a corona, which appears as a circle around the source of light, such as the Moon, when the droplets are the same size. If the droplets vary in size, the complex pattern of diffraction produces a display of colours called iridescence.

As the name implies, a ‘mock sun’ – also known as a sun dog or a parhelion – is a bright spot in the sky that resembles the Sun. Mock suns occur when cirrus or cirrostratus clouds are thick enough to catch the light from the Sun and separate it into the individual colours of the spectrum. The higher the Sun is in the sky, the further away the mock sun will be observed from the real Sun.
Such are the complexities of our atmosphere and the optical images that can be created by the composition of the air above our heads. In the hustle and bustle of our everyday lives and in our eagerness to get from point A to point B we tend to from suffer tunnel vision and seldom look upwards to the skies.

Perhaps, we should spare a little time each day to marvel at the wonders of nature (besides the rain and blistering sun) in the heavens above and try to understand what causes our weather. Each day and night are unique.