Monday, December 5
You are at:Home»News»Sabah»Cooperation must be for people’s interest – Shafie 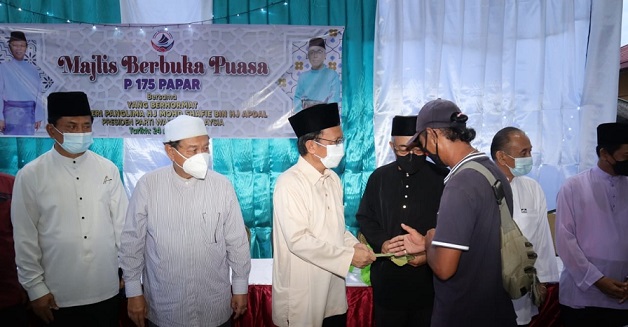 PAPAR (April 25): Parti Warisan (Warisan) has no issue with forming a collaboration with other local parties as long as their priority is fighting for the rights of Sabahans.

Its president, Datuk Seri Shafie Apdal, said the important thing is to refine what understanding needs to be reached through such cooperation.

“It cannot be to just sit down in cooperation but we have to see where the direction is, what is the benefit to the people of Sabah and not to the party or the party leadership. We have to outline the real struggle … We have been in Sabah for over 60 years, we need a direction that is clearly not only enjoyed by the people of this state,” he said.

There is also a need to ensure that Sabah is a territory that can contribute significantly only to Malaysia in terms of economy, but also to strengthen prosperity and national security, the Semporna Member of Parliament said.

Speaking to reporters after an iftar with the local community in Benoni here on Sunday, Shafie stressed that Sabah consists of various races who can sit, agree, discuss and drink together.

The uniqueness, he opined, is the reflection of Malaysia as a multi-racial country, “even though we each order different drinks, we are still able to  sit together. So I think the essence of that is, culture not only respects culture in terms of language but also needs to see how we can bring that relationship closer.”

The former Sabah Chief Minister pointed out that Sabah as a territory is enough to be an example, thus this uniqueness should be spread by the ‘wind from the East’.

This situation in Sabah should be felt, created at the level of the whole of Malaysia as the unification of the people needs to be strengthened, he said.

“This is what we hope, don’t split up because there are so many parties. I am very worried if cooperation with many parties (because) the action of one party can cause the downfall of others,” he said.