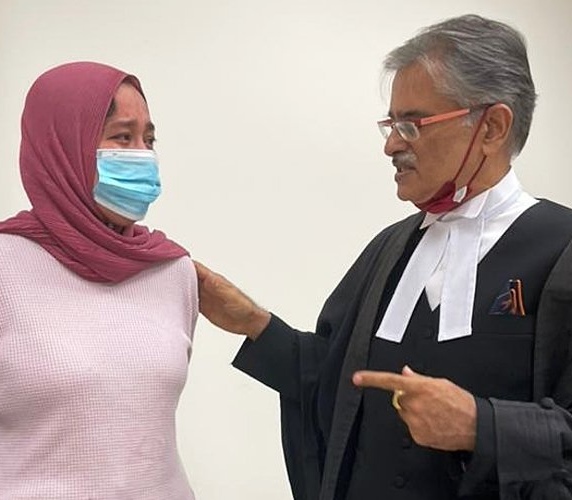 KOTA KINABALU (Apr 26): A former Master Chef Malaysia 2012 finalist, Etiqah Siti Noorashikeen Mohd Sulong, who is facing a murder charge, was allowed to be released on bail by the Court of Appeal here Tuesday pending transfer of her case to the High Court.

The court also ordered her to surrender her passport to the Magistrate’s Court in Kota Kinabalu and to report to the Penampang police station on Monday of every week.

Etiqah’s lawyer, Datuk Seri K.Rakhbir Singh, told reporters that Lee, who delivered the court’s decision, held that there was merit in Etiqah’s bail application and that the court was satisfied there were special circumstances to grant bail.

The 34-year-old woman, who is also an engineer with Petronas, was charged, together with her husband Mohammad Ambree Yunos @Unos, 41, a contractor, in the Magistrate’s Court in Kota Kinabalu on Dec 29 last year for the murder of their maid.

According to the charge sheet, they were alleged to have killed 28-year-old Nur Afiah Daeng Damin at a house in Amber Tower, Lido Avenue, Jalan Lintas, Penampang, between Dec 10 and Dec 13, last year.

The charge, under Section 302 of the Penal Code, provides the death sentence, upon conviction.

In Tuesday’s court proceedings, conducted virtually, Rakhbir Singh applied for his client (Etiqah) to be released on bail pending trial saying that she was ill and that her twin children are both autistic.

He applied for Etiqah to be given bail under Section 388 (1) of the Criminal Procedure Code, which states that the court may direct any person under the age of 16 years or any woman or any sick person accused of such an offence be released on bail.

According to Rakhbir Singh, the case has yet to be transferred to the High Court.