Monday, February 6
You are at:Home»Advertorial»Hotlink partners with artist Kenji Chai to bring state heritage to the Meta-stage
For the freshest news, join The Borneo Post's Telegram Channel and The Borneo Post on Newswav. 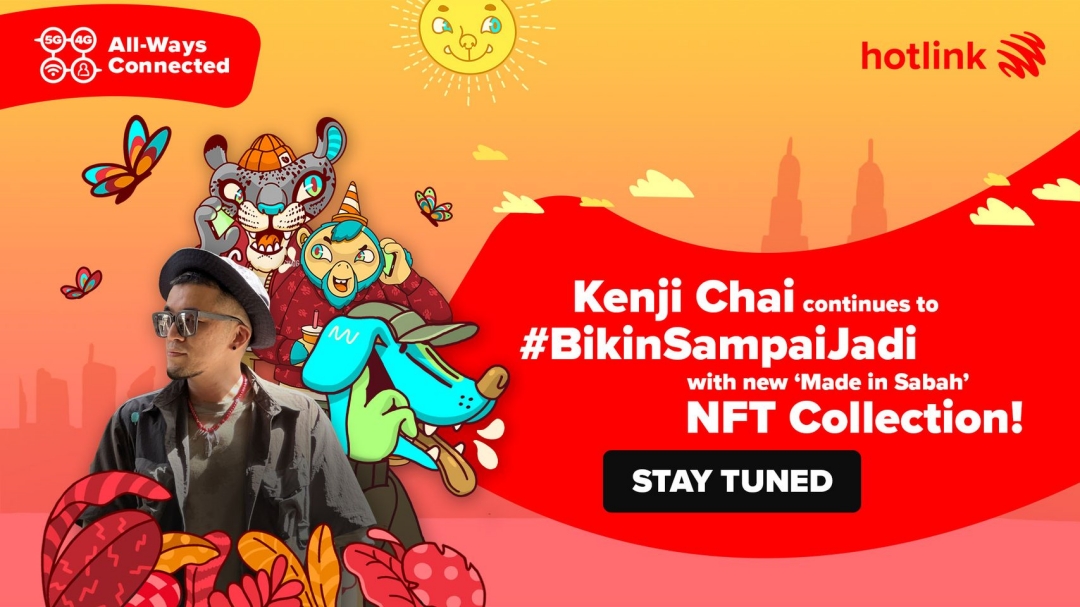 The mural on Wisma Sabah.

KUCHING (April 27): As proud purveyors of the #BikinSampaiJadi spirit, Hotlink has teamed up with local artists to pay homage to their state culture, through a mural in their home state, and the metaverse through an NFT collection.

To celebrate the uniqueness of each state-pride, Hotlink aims to collaborate with local state artists by asking them to express themselves through art — creating artwork that can not only showcase their talents, but also represent what local Malaysians within those states relate to.

One such artist is Kenji Chai who recently completed a prominent mural art piece in his home state of Sabah titled “Only The Strong Survive”.

“This was what I was really looking for,” Chai mused in his #BikinSampaiJadi story.

“The feeling was so real. The joy that I (always) find in art really can’t be replaced or eliminated.

“After three years, I get invited to paint in … a bigger way.”

Staying true to his own personal story, his concept of ‘Only The Strong Survive’ shines a light on some of the fastest native animals you can find on land, air and sea, in Sabah.

“We (Sabahans) live very close to nature. Perhaps that’s why my illustrations are inspired by nature?”

“Also as Hotlink as a brand has a fast and strong network. So, it’s a perfect combination,” says Chai.

Demonstrating not only his drive and motivation to pursue his passions, but also the endless opportunities that await with high-speed internet.

Additionally with the internet, his art has no boundaries, and to Chai, the rise of digital art means the world is now his gallery.

“As you know now, we live in a digital era. NFT has become a very interesting topic for digital artists.”

Hence, in conjunction with the campaign, elements of Chai’s Mural will be immortalized in an exclusive “Made in Sabah” NFT collection with Hotlink.

Hotlink is the first telco in Malaysia to venture into NFT while supporting the local artists and culture. Find out more here.

All proceeds from the NFT collection will go to funding the artist’s future projects, at the artist’s own discretion.

Born in Sandakan and now based in Kuala Lumpur, Chai was previously working as a graphic designer.

However, after realising that he wanted to do something more than just being in the office, he turned to graffiti.

Chai chose to pursue the life of a street artist – knowing full well just how challenging it can be.

Today, his artwork has been displayed on the streets of Kuala Lumpur, Brisbane, Hong Kong and even Madrid.

Through this campaign, Hotlink aims to instill the #BikinSampaiJadi spirit by empowering and enabling local talent through the help of internet and connectivity.

Hotlink Prepaid Unlimited users have access to unlimited internet for all usages, unlimited calls to all networks as well as unlimited hotspot!

Meanwhile, Hotlink Prepaid Fast users have access to uncapped, high-speed internet for any usage, on all apps, zero wastage with longer internet validity, many affordable internet passes to choose from, from as low as RM2.

Additionally, all Hotlink prepaid users get to enjoy exclusive deals via Hotlink rewards and personalized internet offers. With Hotlink Prepaid you get internet your way to #BikinSampaiJadi and achieve your dreams!

Previous ArticlePBRS ready to defend Tuaran for BN
Next Article SDNU to hold TGA in Sibu, first time outside Kuching