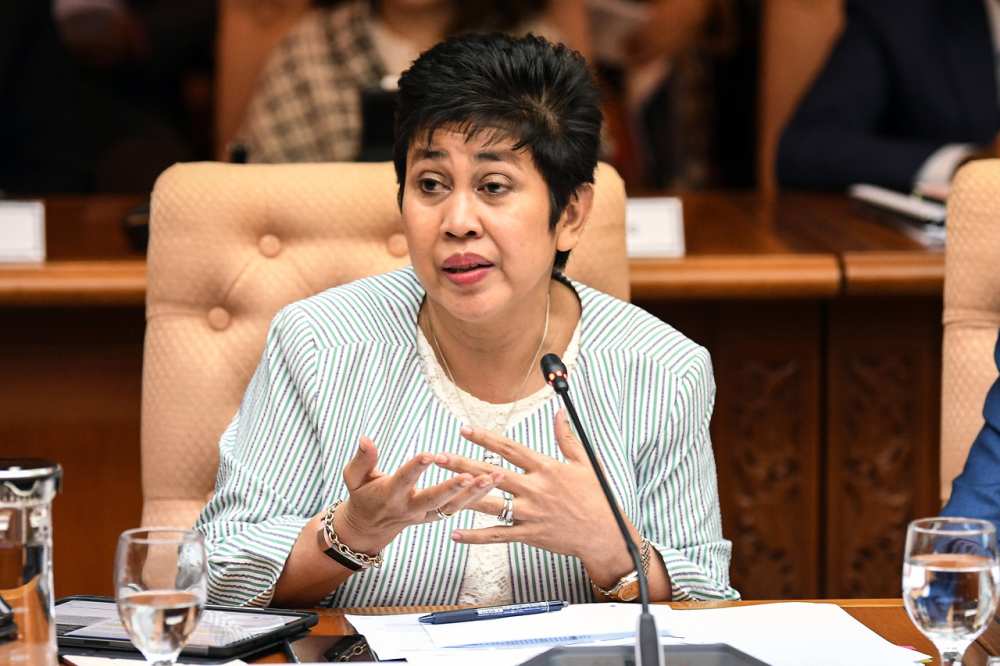 Datuk Nor Shamsiah Mohd Yunus said that on analysing the ringgit, a big picture view was needed. – Bernama photo

Question 1: The ringgit has taken a dip versus the US dollar and Singapore dollar in recent weeks. Why is this happening?

Let me start by saying that our Malaysian ringgit is flexible and market-determined. This flexibility is a key mechanism to help us adjust to changing global economic and financial developments, by altering the relative prices of our goods and services.

Having said that, the ringgit weakening against the US dollar by 4.4 per cent and Singapore dollar by 2.4 per cent this year were mainly driven by external factors. First and foremost, the US dollar is appreciating against most major and regional currencies as the US Federal Reserve is expected to increase interest rates more aggressively to manage the high inflation in the US of 8.5 per cent in March, which was driven by strong growth and labour market conditions.

This has also led global portfolio managers to reallocate their investments into higher yielding assets in the US. We are seeing this across the globe. Just to name a few, the Japanese yen is weaker by around 10.4 per cent against the US dollar, the UK pound by around 7.3 per cent, South Korean won by 6.0 per cent and Thai baht by 2.7 per cent. The Monetary Authority of Singapore (MAS) has also tightened its monetary policy as inflation rate reached a high of 5.4 per cent in March.

Second, investor nervousness about the conflict in Ukraine and signs of weakness in the global growth momentum is also contributing to higher demand for US dollar-denominated assets as it is perceived to be a safer currency. This is also known as a ‘flight to safety’. The VIX or investor ‘fear index’ has risen to 31 points (April 27) compared to 18 points on average. The IMF (International Monetary Fund) has revised down its global growth forecast twice this year already (and it is only April), with 2022 growth revised lower to 3.6 per cent (previous: 4.4 per cent).

Third, there are increased concerns over the slowdown in China – particularly arising from the recent imposition of Covid-19 restrictions in major cities. This development has an impact on Malaysia, as China is one of our largest trading partners accounting for close to 16 per cent of our exports. To a large extent, this also explains the recent relative movement of ringgit against regional currencies, as Malaysia has stronger trade linkages with China compared to other regional countries (e.g. exports to China as a percentage to GDP for Indonesia: 3.8 per cent, Thailand: 0.7 per cent, Malaysia:12.4 per cent).

However, we believe that this is manageable given our diversified export structure as evident in the recent strong export performance (March 2022: 25.4 per cent y-o-y). The current elevated commodity prices and the positive impact on our foreign currency earnings will also help to cushion the downward pressure from other external factors.

Question 2: What is the impact to our economy and cost of living? Is BNM concerned about it?

Ringgit depreciation often happens during unfavourable global developments. We are after all a highly open economy. What affects our major trading partners will also affect us.

However, we must look at the whole picture. The impact of a weaker ringgit can be both a negative and a positive, depending on where you are in the economy.

Let me first tackle the impact of a depreciating ringgit on inflation. No doubt, there will be elements of that.

Generally speaking, we will expect to see some price increases given the depreciating ringgit as imports become more expensive. We will not, however, see hyperinflation in Malaysia.

There are several policies in place that help mitigate the inflationary pressures we see. For one, the current fuel price ceiling, which has been in place since 2021, has kept prices stable amidst the exchange rate and oil price fluctuations. Shorter-term measures implemented by the government which include price control on key essential items such as fresh chicken and cooking oil would mitigate cost pressures. Income transfers to vulnerable households will also help soften the impact.

But at the same time, it is important to look at a broader perspective when it comes to a weakening ringgit. Here, I would like to point out two things.

Firstly, about 36 per cent of our Malaysian workers and about 42 per cent of the labour income in Malaysia are from the export-oriented sectors. In general, a weaker ringgit makes our exports more competitive as it makes them relatively cheaper. Firms in these sectors also see their net revenues increasing in ringgit terms, especially when they have little imports or if their imports are priced in the same currency of their exports. These would help benefit jobs and incomes in these sectors.

The flipside is also true. A stronger ringgit will negatively affect export-oriented sectors, but benefit consumption of imported items.

The point is this, movements in the ringgit in either direction will benefit some and affect others. Therefore, what is most important is to avoid large swings of the currency so as not to disrupt economic activities.

I would also like to address the concerns I’ve been hearing that this depreciation is a tell-tale sign that Malaysia is at risk of becoming like some countries that are now facing troubles paying their external debts. Let me stress that Malaysia is nowhere near that position. We are expected to record a current account surplus exceeding RM75 billion in 2022. We are exporting more than we are importing. It also means that we are getting more foreign currency than we are paying out. Besides that, Malaysia is a net creditor to the world. Today, we have more foreign assets than foreign liabilities – unlike during the Asian Financial Crisis. Because of that, there should be no concerns that Malaysia might not be able to meet our foreign currency obligations given the recent fluctuations in ringgit.

Question 3: How does a flexible ringgit help the Malaysian economy?

The value of the ringgit is market-determined. This means that just like most of the goods and services we buy, the exchange rate is based on the demand and supply in the foreign exchange market. Therefore, our exchange rate is flexible and can adjust depending on the economic and financial developments, both in Malaysia and abroad.

This flexibility is important as it allows our economy to adapt to changing conditions. It buffers the economy from the worst effects arising from economic shocks. You may recall that in 2015, global oil prices crashed by around 50 per cent. During this time, our ringgit also depreciated by around 19 per cent. This helped cushion some of the impact of the low oil prices on our economy as exporters’ earnings in ringgit terms increased.

Our exports also grew by 1.6 per cent in ringgit terms. Our goods and services were also relatively cheaper, thus making it more attractive to buyers. In times of weaker global demand, this helps our businesses protect some parts of their revenue and help limit the job losses to Malaysians.

Let’s consider the alternative scenario. If our ringgit were fixed, our exports would have declined significantly by 15 per cent in ringgit terms. The oil price crash would have also resulted in substantial decline in government revenue. Without translation gains, the cutback in public spending would have been sharper, which leads to declining investments and job losses for many Malaysians.

Thankfully we didn’t go down that road. Because the ringgit was flexible, it helped support our economy to grow by 5.1 per cent at that time, and kept our unemployment rate stable at 3.1 per cent. A flexible exchange rate can work both ways. When the ringgit appreciated by 12.5 per cent following the Global Financial Crisis due to the massive increase in global liquidity, our non-commodity exports moderated to around 3.8 per cent but growth remained steady to average around 5.7 per cent in 2010-2013.

The fast pace of economic recovery especially in emerging market economies, resulted in a build-up in inflationary pressures and rising domestic demand. By end-2013, domestic price levels rose to above 2 per cent. Given the heightened inflationary risks during the period, the ringgit appreciation played its role by moderating demand and the costs of imported inputs and consequently, consumer prices.

Since the Global Financial Crisis of 2007/2008, the ringgit has experienced two-way movements, with both appreciation and depreciation episodes. Excluding large crisis periods, the Malaysian economy has registered stable growth of around 5.4 per cent, inflation between 1.5 per cent and 2.5 per cent and the unemployment rate to average around 3.2 per cent.

This is what we mean by ringgit playing an important stabilising role in the economy. The ringgit could depreciate and appreciate, but what’s important is that incomes and jobs continue to grow and that inflationary pressures are kept in check.

Question 4: Can the ringgit depreciation be attributed to the country’s decision to keep the Overnight Policy Rate (OPR) at its lowest of 1.75 per cent way too long?

There are many factors that can influence the exchange rate. Interest rate differentials is just one of them. As explained earlier, we are seeing an appreciation of the US dollar as investors rebalance to US dollar assets in anticipation for the Federal Reserve to increase its interest rates. This expected increase in interest rates is in response to the strong growth and inflation pressures in the US which have reached a 40-year high at 8.5 per cent in March 2022.

The circumstances in Malaysia are different. We are only beginning to emerge from the crisis, with a favourable growth and jobs outlook. Although inflation is picking up, they are currently mostly supply-driven. However, we are closely monitoring if these higher input costs will then further affect a broad range of goods and services, especially if these price pressures are persistent as people start spending again.

Ultimately, any changes to our monetary policy will be based on our assessment of how recent developments affect domestic inflation and growth prospects, and this will be discussed at the next MPC on May 10 and 11.

Question 5: What are BNM/government’s plans to address the recent weakness in ringgit?

Bank Negara will continue to manage the risks arising from both domestic and external developments. While we do not target any level of exchange rate, our role is to ensure movements in the exchange rate are orderly. By that, we mean that there is no sharp or wide swings in the value of the ringgit.

We are ready to use the tools at our disposal to ensure these outcomes. This will help businesses plan and undertake business and investment decisions with more certainty, which will help to support a more sustainable recovery.

Even amidst these challenges, Malaysia is still expected to register a strong recovery this year. Borders are open, businesses are resuming activity and our job market is improving. Our flexible and market-determined exchange rate is supporting us on this recovery path. Beyond this, Malaysia has a healthy current account surplus, a net external creditor position and has an adequate level of international reserves. Our economic and trade structure is also highly diversified, allowing us to count on many sources of growth. These are among our strengths which will help us tide through these highly volatile times.

Having said that, I would like to reiterate that we need to continue implementing structural reforms to strengthen our growth potential and economic prospects. This would make Malaysia a more attractive investment destination. As a consequence, the larger foreign direct investment and portfolio inflows, and higher output generated will naturally support the ringgit. We must therefore focus on building a stronger, more sustainable economy with improvement in living standards. – Bernama