Saturday, May 28
You are at:Home»Features»From folks game to competitive sport

Seasoned players and association going all out to elevate status of armwrestling in Sarawak, bring in new blood 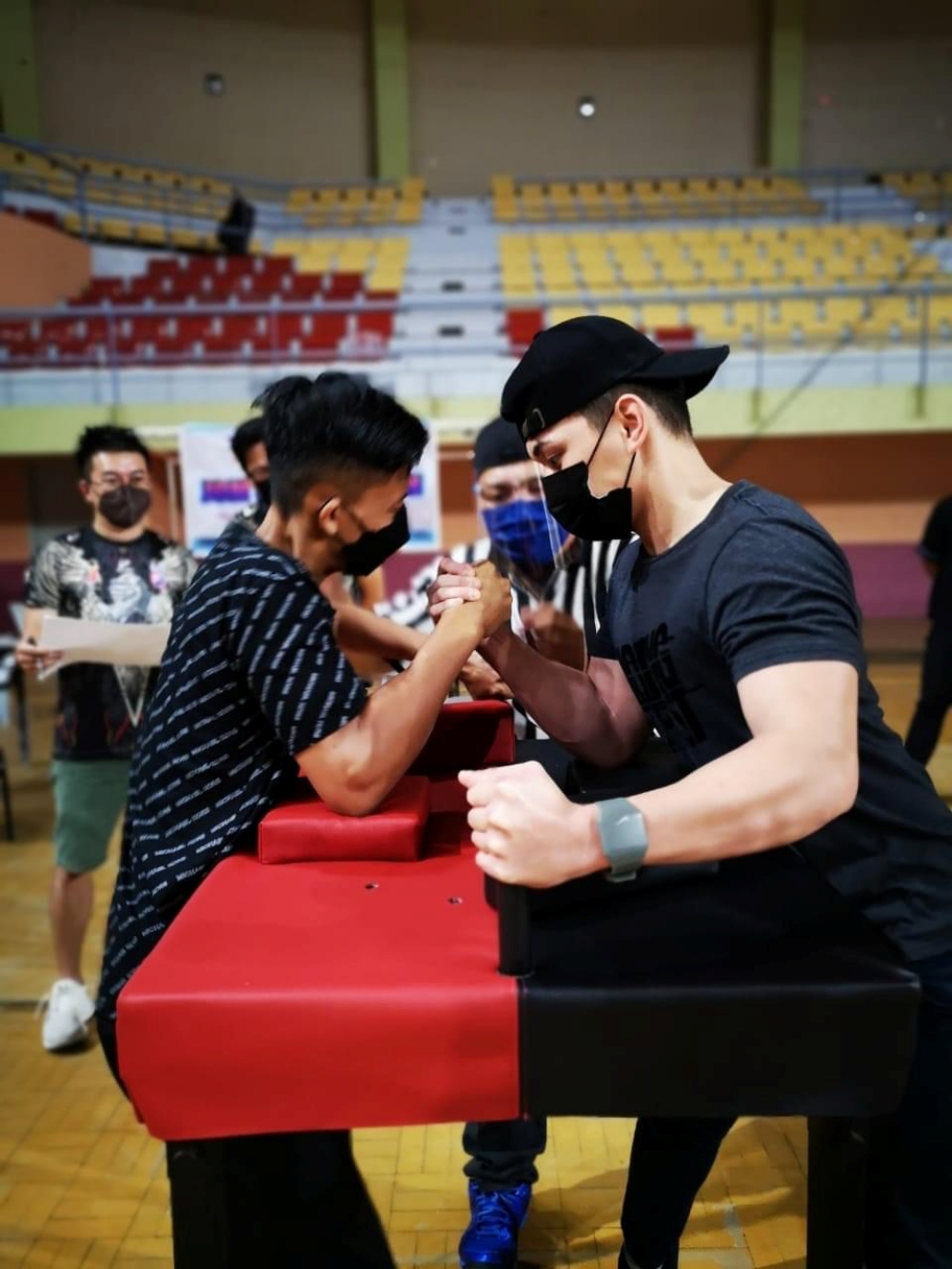 Two young pullers giving their all during a round of Sarawak X-Tive 2022’s armwrestling challenge in Miri.

ONCE seen as a ‘kampung’ (folks) game and a mere entertainment, armwrestling is now a fully-recognised sport with ever-increasing number of enthusiasts.

Sarawak even has its own coach for this discipline – 28-year-old Dominic Johnny.

“I have always been crazy about armwrestling, since I was 12.

“Back then, it was just a hobby and not many people, including myself, really considered it a full-fledged sport.

“Nowadays, though, it has reached a totally different level,” he told thesundaypost in Miri. 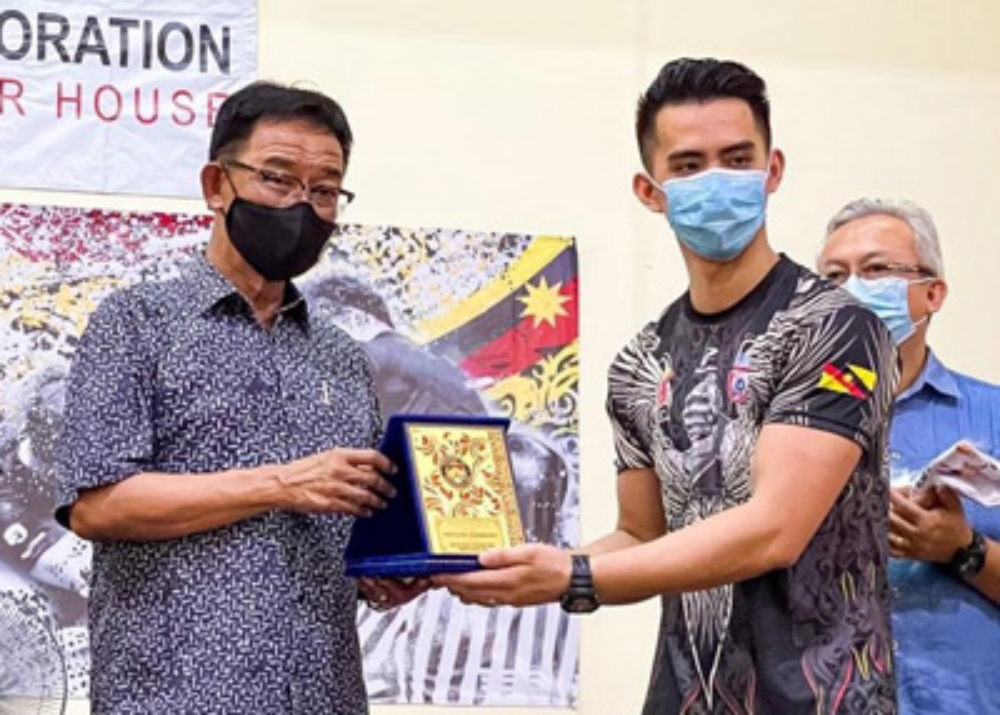 Dominic, a Kadazan from Putatan, made his debut in competitive armwrestling at age 16, in a tournament held at his village during the Kaamatan Festival in 2010.

“I learned a lot from that competition – my elbow was seriously injured during the final, which got so bad that I really thought I would never armwrestle again.

“But thanks to sports science, I learned a lot about rehabilitation and underwent slow recovery. It took me two years to make my return in competitive armwrestling,” said Dominic, whose wife had just given birth to a baby girl.

In 2016, he was adjudged the 75kg winner of the Premier 101 Armwrestling Championships.

“That two-day competition was the first where I competed against so many contenders,” said Dominic, who graduated from Universiti Teknologi Mara (UiTM) with a Bachelor in Sports Science (Hons) majoring in physical conditioning.

Following the 2016 feat, he went on to clinch the Men’s Senior 70kg Left-Hand Gold Award at the 2021 National Armwrestling Championships held in Selangor.

It was a very challenging preparation because his main priority was actually not himself, but his charges. 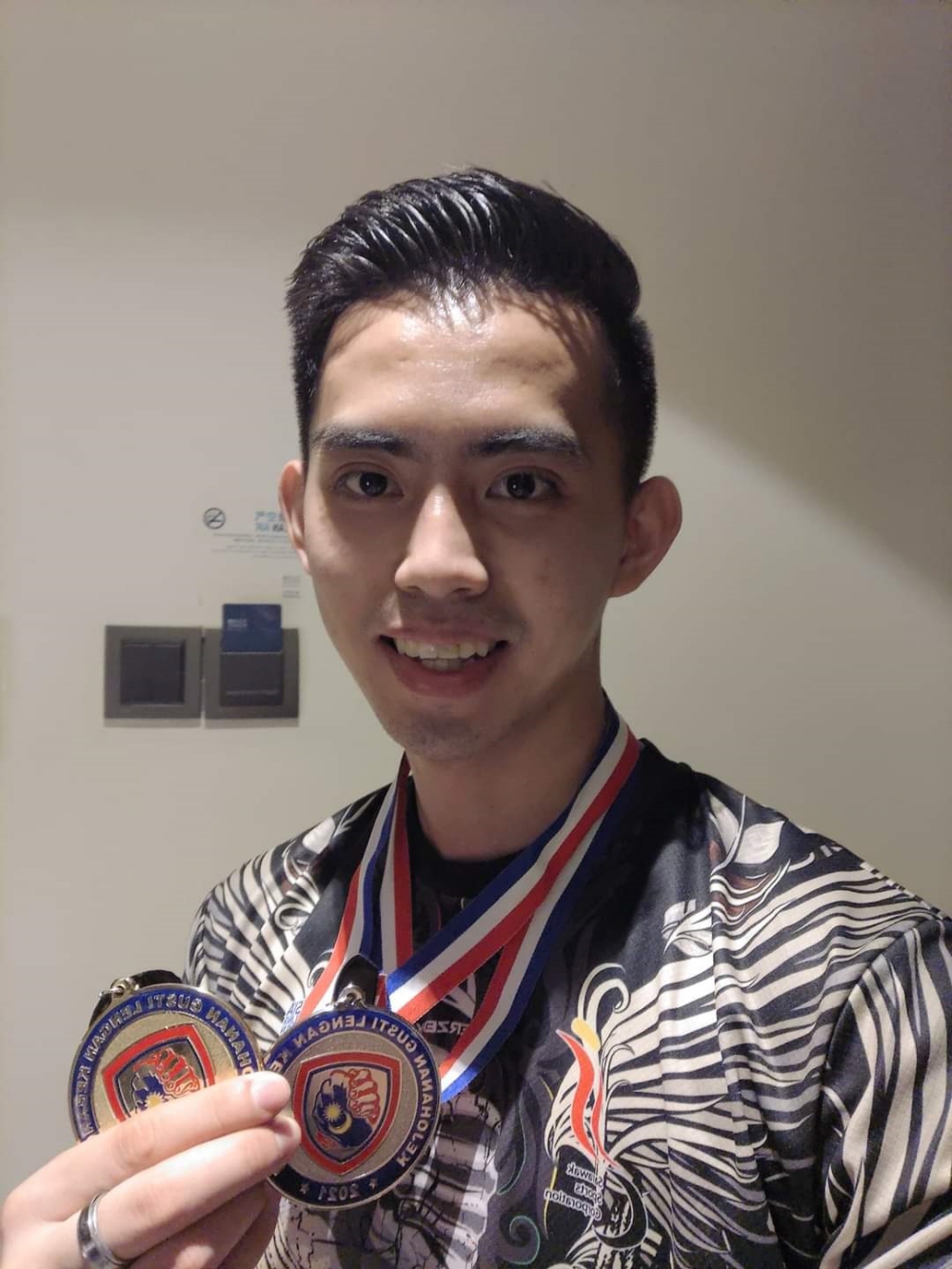 Dominic with some of the medals that he won at the National Armwrestling Championship.

“As a coach, I always take care of my athletes, so to allocate time for my own preparation and to evaluate my own training progress is very challenging. Still, the Selangor meet was a very interesting experience,” said Dominic, who is a full-time coach under Sarawak Sports Corporation (SSC) in Kuching.

He regarded the opportunity given by the SSC as his ‘greatest and proudest moment’ throughout his involvement in armwrestling.

Apart from that, he also highlighted the partnership with Premier 101 Armwrestling Club in developing elite and new athletes in Kuching.

“I also help athletes from other clubs and associations in Sarawak via online coaching, where my programme covers not only training and techniques, but also the safety aspects of the sport.”

According to Dominic, armwrestling has grown more and more popular over the past six years, especially among the youths, adding that the majority of state athletes of this sport are aged between 18 and 21.

“Sarawak has ranked among the Top 3 overall in Malaysia, despite having only entered competitive armwrestling at national level in 2018.

“This is a very good development, not only in terms of competitions, but also of it promoting a healthy lifestyle among youths.”

In this respect, he believed that the armwrestling community in Sarawak could use it to their advantage, namely promoting the growth of the sport locally and expanding its presence internationally.

“The Sarawak armwrestling community is unique because of the diversity of the people, who are of different races and beliefs,” he added.

Asked about the possibility of armwrestling being listed as one of the sports in the Malaysia Games (Sukma), Dominic said: “It is a possibility, but there are still lots of things needed to be done.”

All enthusiasts, including those living outside Kuching, regardless of age, gender and other social backgrounds, are most welcome to message Dominic personally via his social media handle ‘Dominic Johnny’, on both Facebook and Instagram, to join the athletes’ weekly training for free.

“There are no gym memberships and coaching fees as far as my programme is concerned.

“Contact me, and I shall help you in joining the armwrestling clubs and associations that are near you.

“You should grab this opportunity since the Sarawak government is very supportive of armwrestling,” said Dominic.

On his advice to those interested in armwrestling, he said: “It is never too early or too late to start. Those who like to challenge themselves and love active lifestyles and strength-based sports, armwrestling is the one for you. It is a very good activity, one that can bring people together for them to learn the different cultures.

“Always seek advice from as many senior armwrestlers as you can – you will learn new things from each person whom you encounter.

“Believe in yourself and never question your capabilities; just be sure to work hard and train smart.” 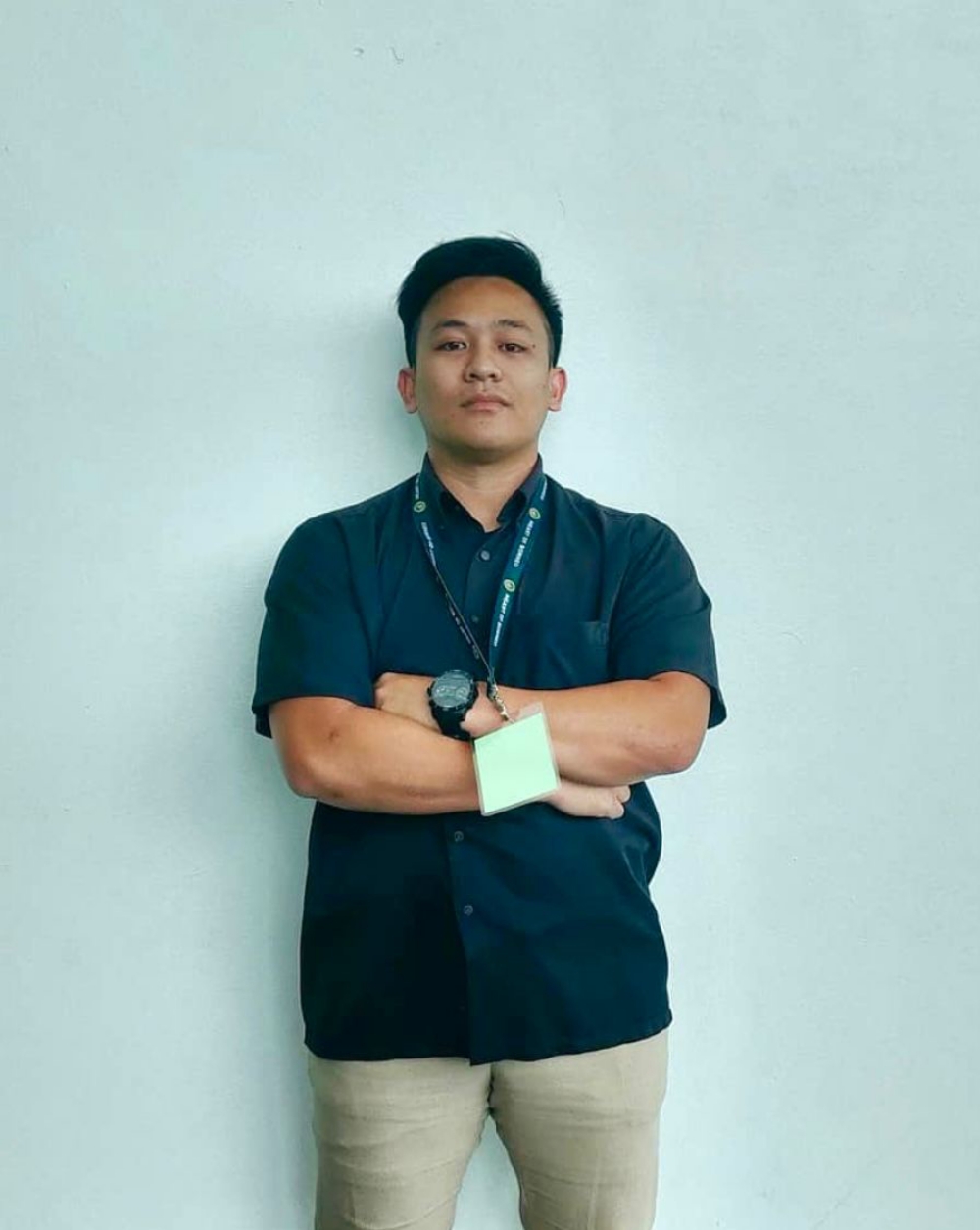 Sahadan advises all aspiring pullers to reach out to the registered divisional associations closest to their respective districts.

Sahadan Mohd Rani has been following armwrestling since he was a small boy.

He remembers at that time, the competitions were small-scale, village-level events, but they really fuelled the inspiration for him to become an accomplished puller one day.

“I don’t actually remember my first competition, but the first that I won was in 2018 in a tournament hosted by the social and welfare club of Marudi Labour Office,” said the 27-year-old Mirian, who is father of three children – aged seven, three and one.

Currently based in Bintulu, this Forest Department personnel regarded his victorious feat at the 2020 Sarawak Armwrestling Championship as ‘a sweet and unforgettable experience’ throughout his involvement in the sport.

He won the Men’s Under-78kg (Right Hand) title, and placed second runner-up in the Left Hand sub-division of that category.

More recently, Sahadan was named ‘Champion of Champions’ of the Bintulu Division Armwrestling Championships held in March this year.

His impressive achievements, however, did not come without any hurdle. 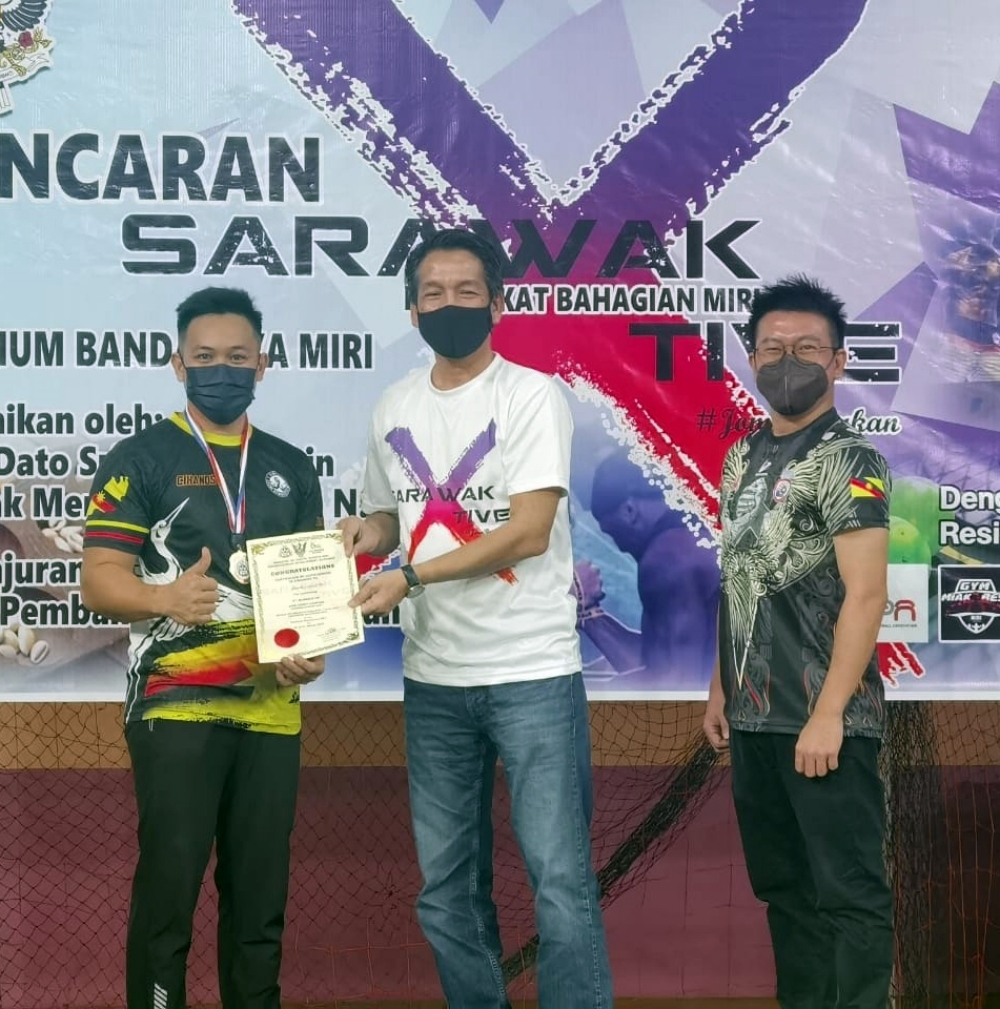 (From left) Sahadan receiving his certificate of participation from Telang Usan assemblyman Dennis Ngau during Sarawak X-Tive 2022 event in Miri, witnessed by Chu.

“It’s a challenge to juggle my training time with the pullers in Bintulu and Miri as this requires me to travel back and forth between the two divisions – and then, there’s my work.

“But I love this sport. It’s a small sacrifice.”

Sahadan, also an enthusiast in traditional archery and boat-racing, advised aspiring pullers to reach out to registered divisional associations closest to their respective districts.

“These divisional associations have their respective Facebook pages, so check them out,” he added. 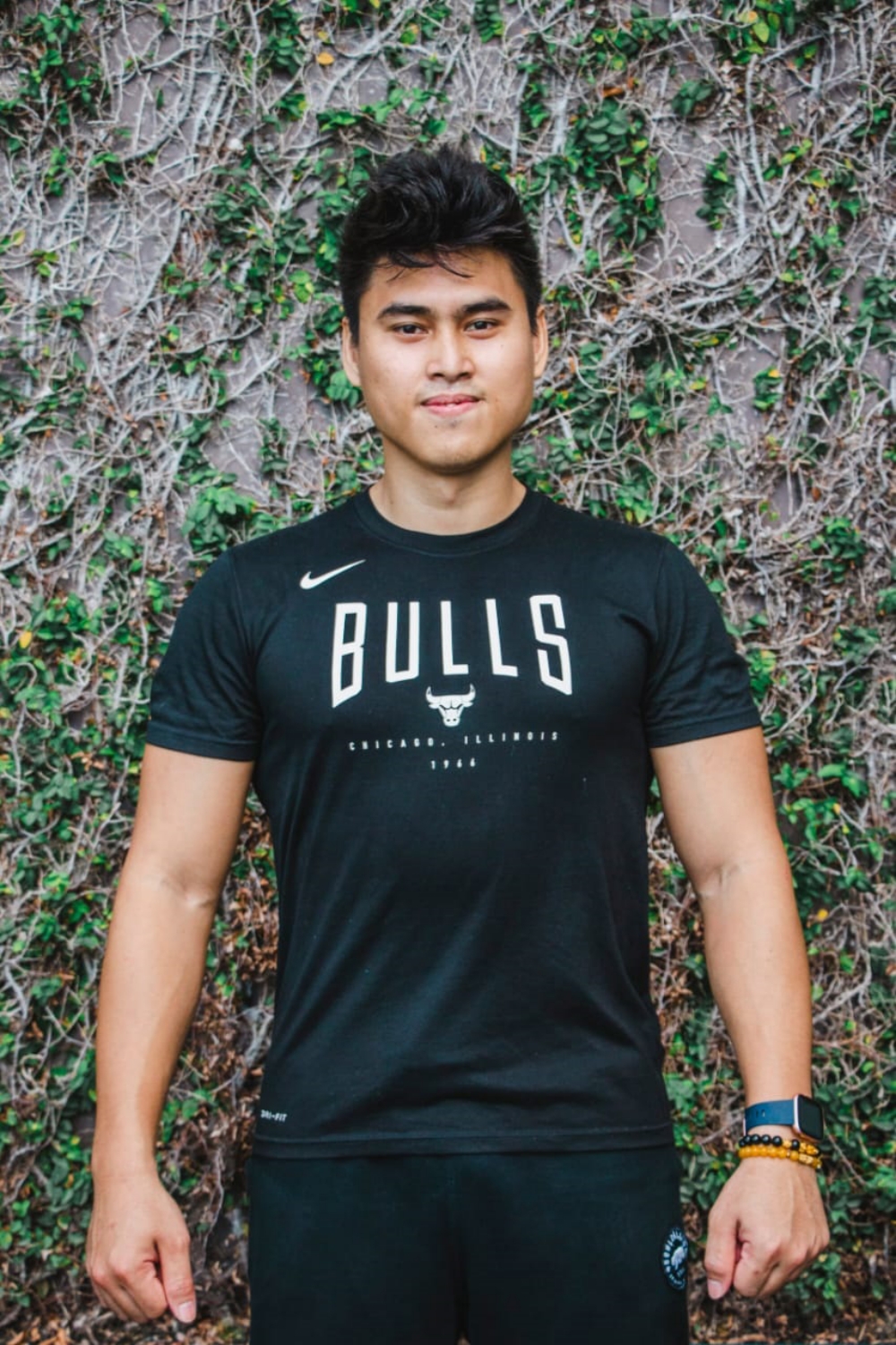 Bryan is a relative newcomer to the sport.

Bryan Michael Harry’s vision is to bring in those who exhibit the potential to become good armwrestlers.

A relative newcomer to the sport, this 30-year-old fitness trainer from Miri took up armwrestling in September 2020.

“Armwrestling is a good game, and I receive good support not only from my family and friends, but also colleagues at my workplace,” said this father of two small children who used to be active in bodybuilding several years ago.

His advice for fellow enthusiast is one that he himself adheres to every single day – to always be mentally and physically ready.

“I always strive to be a better fitness practitioner so that I can guide others to become better as well,” added Bryan. 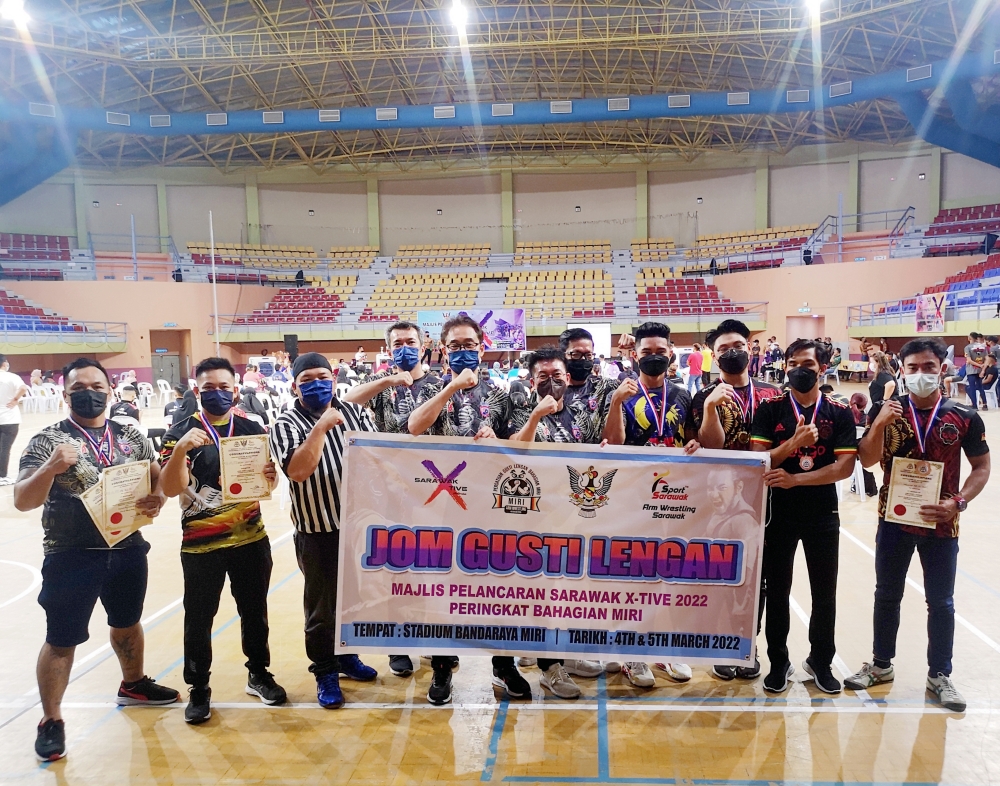 The committee members of Miri Armwrestling Association in a group photo with the athletes participating in Sarawak X-Tive 2022 in Miri.

According to Miri Armwrestling Association president Alex Chu, this sport is considered quite new in the division.

“Many still see it as a ‘kampung’ game and there are not many non-Bumiputera participants.

“Now, we are doing all we can to promote it through gyms and sports centres,” he said.

In Miri, the division-level launch took place at the Indoor Stadium.

Chu said he did not expect to receive such an encouraging response for the armwrestling challenge during Sarawak X-Tive 2022.

“The participants included the regulars and the newbies – it was so encouraging.”

Asked about the possibility of armwrestling being included in Sukma, Chu remarked: “Judging from past meetings with the Sports Commission, I think this game would go into Sukma – only thing is for us to focus on athletes aged under 21; that, and we need to train more coaches and place them in schools.”

Chu said the association was planning to organise an open tournament, which he considered to be ‘our biggest tournament in Miri’.

“The proposed event date is in May this year. We’re out to seek new blood, especially youngsters.

“So, after getting the players from Miri Division ready, we would request the MSNS (Sarawak State Sports Council) and the SSC coaches to come to Miri and guide the players.

“After that, we should be able to choose best pullers for all categories to represent Miri in the annual state-level open championship, and further, to represent Sarawak in the Malaysian Open.

“My vision for Sarawak is to have more young referees and coaches so that they would be able to share their knowledge with their friends and the people in their hometowns – this is what I hope to achieve this year.” 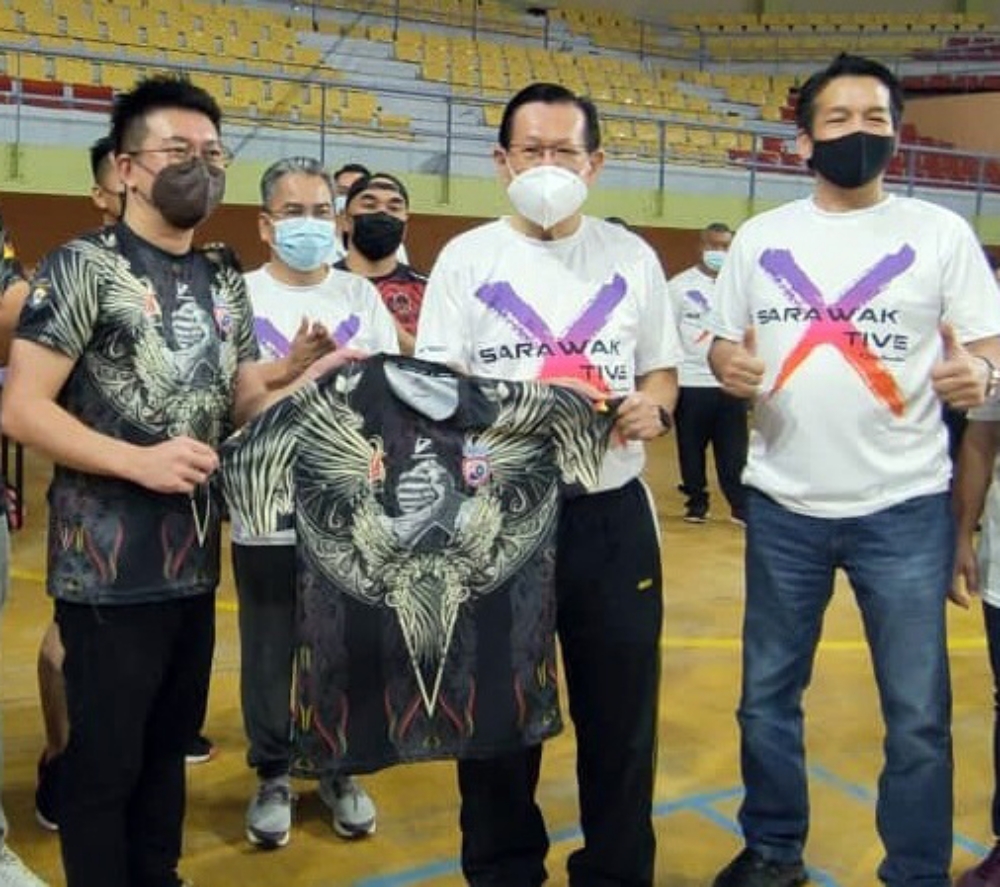 (From left) Chu presenting a memento to Transport Minister Dato Sri Lee Kim Shin at the opening ceremony for the division-level Sarawak X-Tive 2022 in Miri. Looking on is Telang Usan assemblyman Dennis Ngau.

Chu said with Sarawak being ranked among the Top 3 in last year’s National Armwrestling Championship, the state team would work harder ‘to do even better’.

For Miri Armwrestling Association, however, Chu expressed hope that the government, through MSNS, would provide a place for them to carry out their activities, as well as assistance in terms of coaching and refereeing.

Established in August last year, the association does not have its own premises for training and because of that, its athletes and trainees have been training on their own without the help and guidance of any certified coach.

In this regard, Chu said: “Our association also plans to organise clinics for coaches and referees in Miri. With guidance from the coaches, aspiring pullers should be able to learn the right skills and techniques in armwrestling, which are important in avoiding injuries.

“We also welcome cooperation from other more experienced clubs and associations in our activities, such as the clinics meant to raise our athletes’ understanding about the rules of this sport.”

Miri Armwrestling Association is among 10 recognised armwrestling associations in Sarawak – the others are in Kuching, Serian, Sri Aman, Betong, Sibu, Mukah, Sarikei, Kapit and Limbang.