Sunday, May 22
You are at:Home»Features»Telling stories through earth art 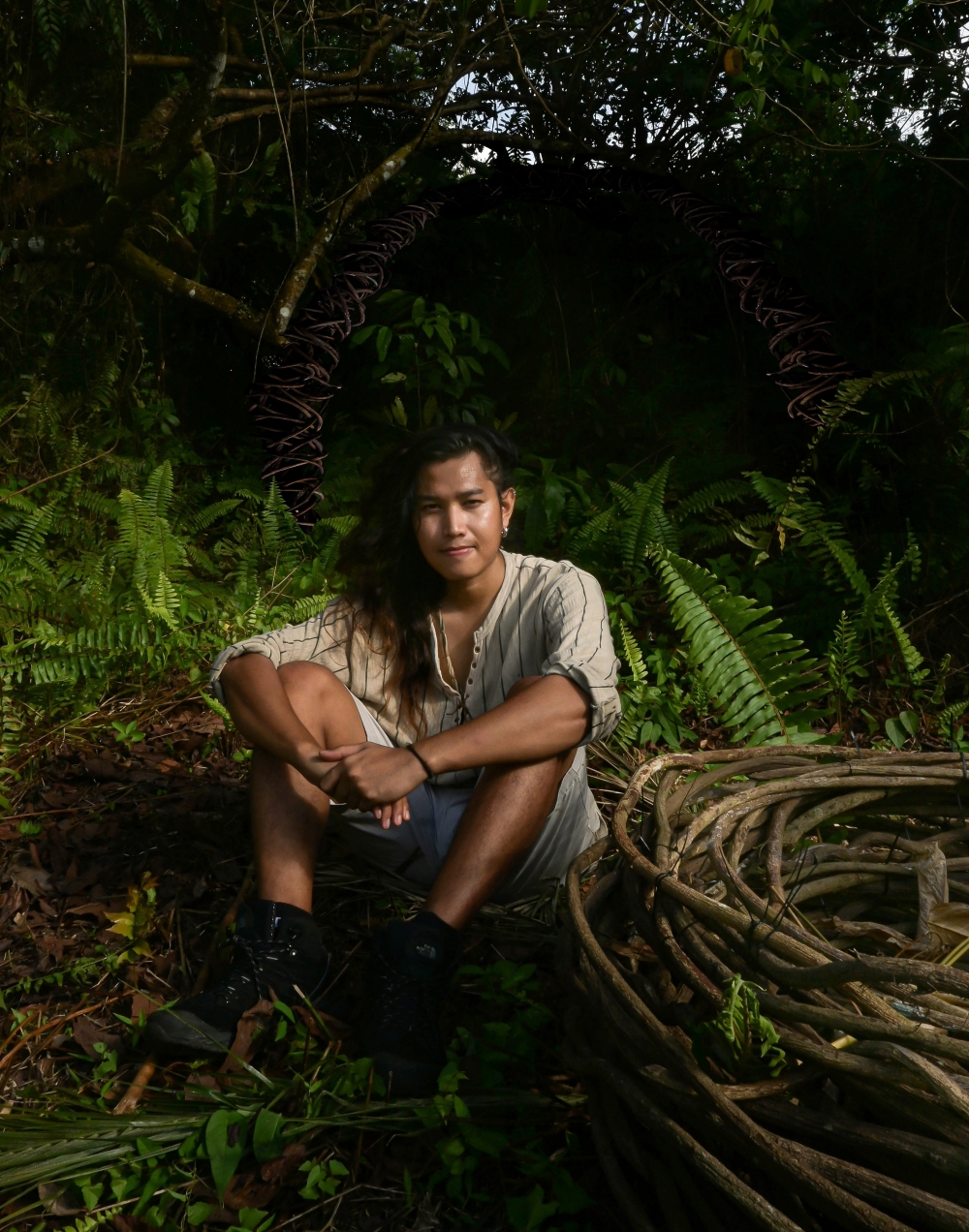 Sahzy loves to share stories, but through the exhibition, he can share them with a broader audience.

IT was honestly a challenge for me to find HAUS KCH Creative Hub, despite it being within the familiar City Square area off Jalan Pending.

The ‘voice’ on Waze kept on saying ‘you have arrived at your destination’ as I kept on driving past a spot where there was a block with striking mural adorning the open wall on one of its sides.

‘This must be it’, I thought but just to be sure, I texted M Sahzy.

“You’re here. Come up. The door’s behind the building,” was his reply.

Bohemian was the feel that I got even before walking up the steps leading to the studio space.

“Hi. Welcome, welcome,” greeted Sahzy, gesturing me to the section where his showcase ‘The Jungle Portals’ was on display in connection with HAUS KCH’s month-long ‘temu1’ – a kick-start exhibition featuring the works of artHAUS residency artists.

‘From nature, back to nature’ 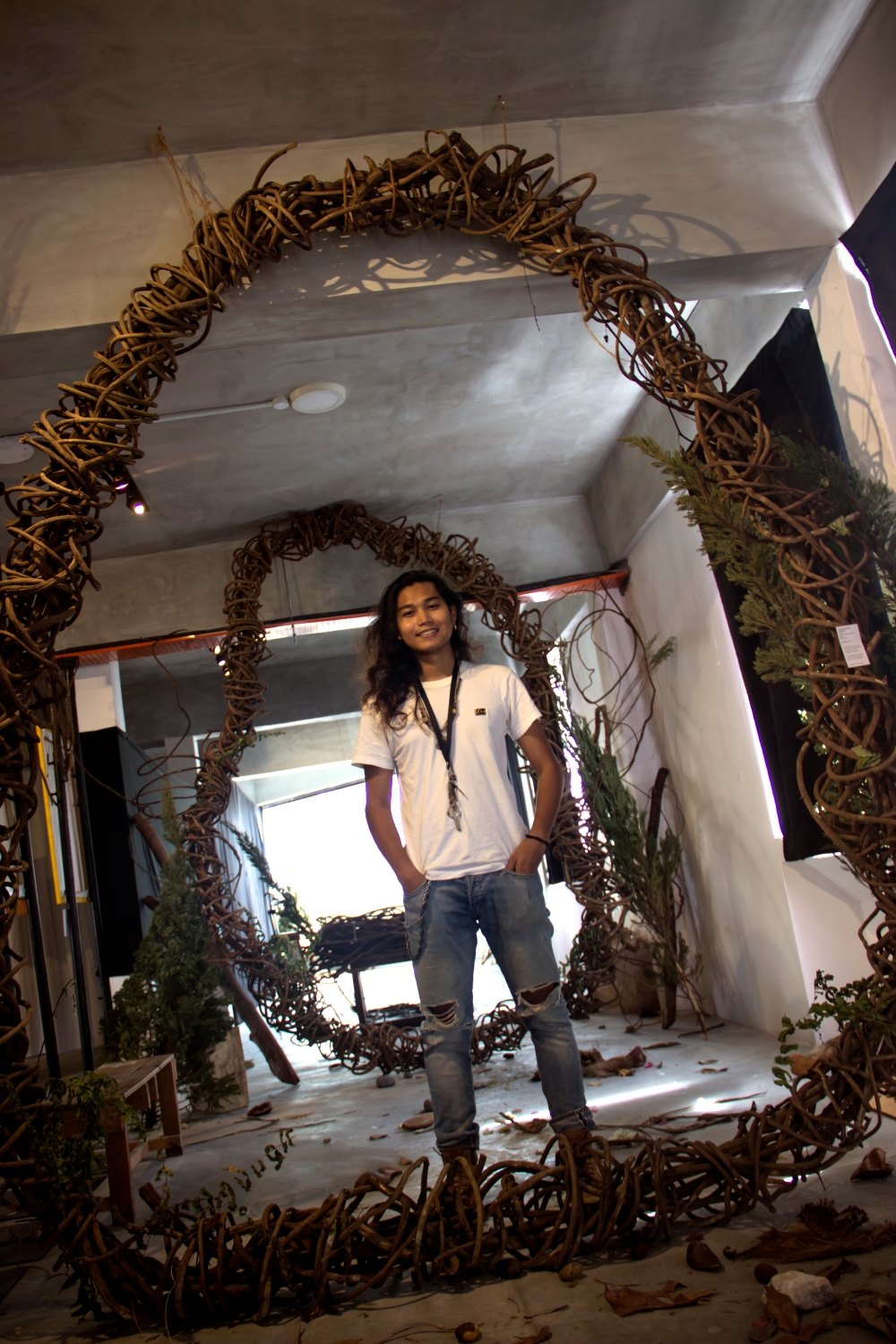 The ‘Jungle Portals’ represents the concept that Sahzy wants to be known for – structural arts made from organic materials.

The whole structure had three components: a painting, the ‘portals’ and the ‘nest’, all connected by jungle vines down to the painting’s frame.

Sahzy said ‘Jungle Portals’ represented the concept that he wanted to be known for – structural arts made from organic materials, including the discarded excess from the city council’s landscaping works.

“Anywhere I can get materials for my artwork – from the streets, from the jungle, whatever is left from farm-clearing, pruning or tree-trimming works – I’d collect them, do some research and experiments, draw the sketches, and then do the sculpting.

“This concept allows me to express nature and the rainforest, and the skills that I have learned allow me to deliver that story,” the 25-year-old Kuchingite told thesundaypost. 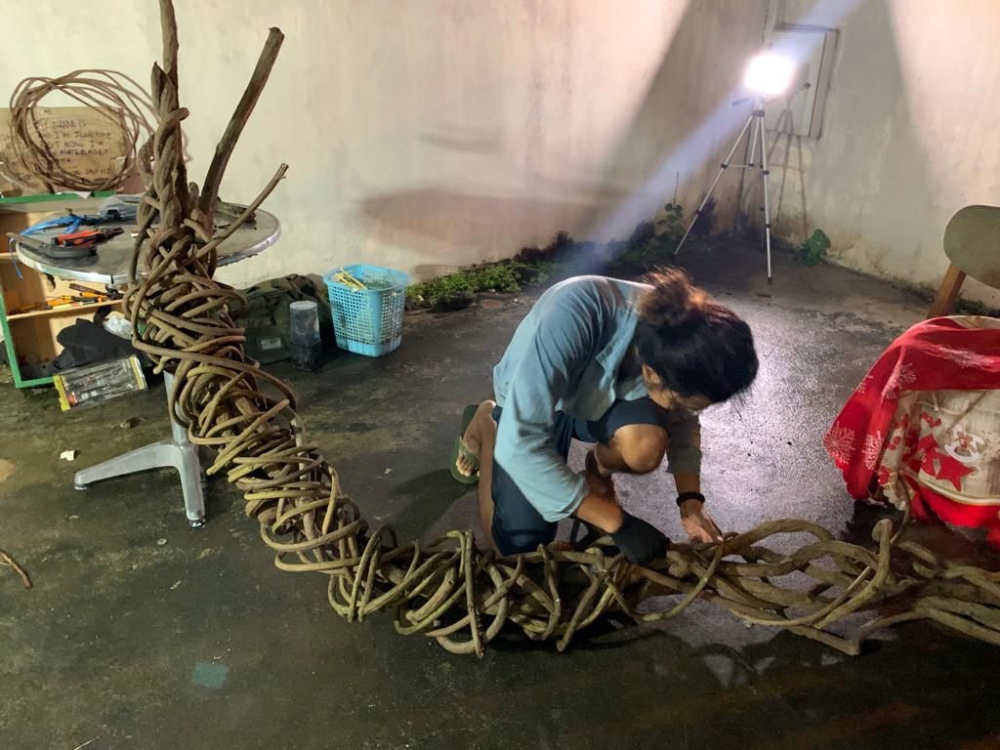 Sahzy working on the vines for his ‘Jungle Portals’ setup.

For the exhibition, Sahzy would encourage the visitors to walk through the ‘portals’ barefoot.

“The objective is for them to get that same feel that I have when I do my work.

“I construct my work barefoot; I love hearing the leaves rustling and twigs snapping in every step.”

He said much of his work was inspired by renowned sculptural artist Spencer Byles, who was his mentor for two years.

“He (Byles) taught me so many things, like what materials to use and why, and gave me ideas on ways I could present my story through my work.

“All these had actually helped me figure out my Iban roots and ancestry, through this form of nature art.”

Sahzy said it took him almost six months to finish ‘Jungle Portals’, and much of that time was spent working undisturbed in a quiet, rather remote area.

Asked where that place might be, the artist just smiled.

“This (sculpture) will rot, eventually,” he quickly moved on to the next subject.

“That’s the concept of this project – that art created out of nature, would return to nature.

“And its storage is not a room in a building, but in the jungle. I would take artwork out only for exhibitions, and once done, I’d put it back in the ‘jungle storage’.” 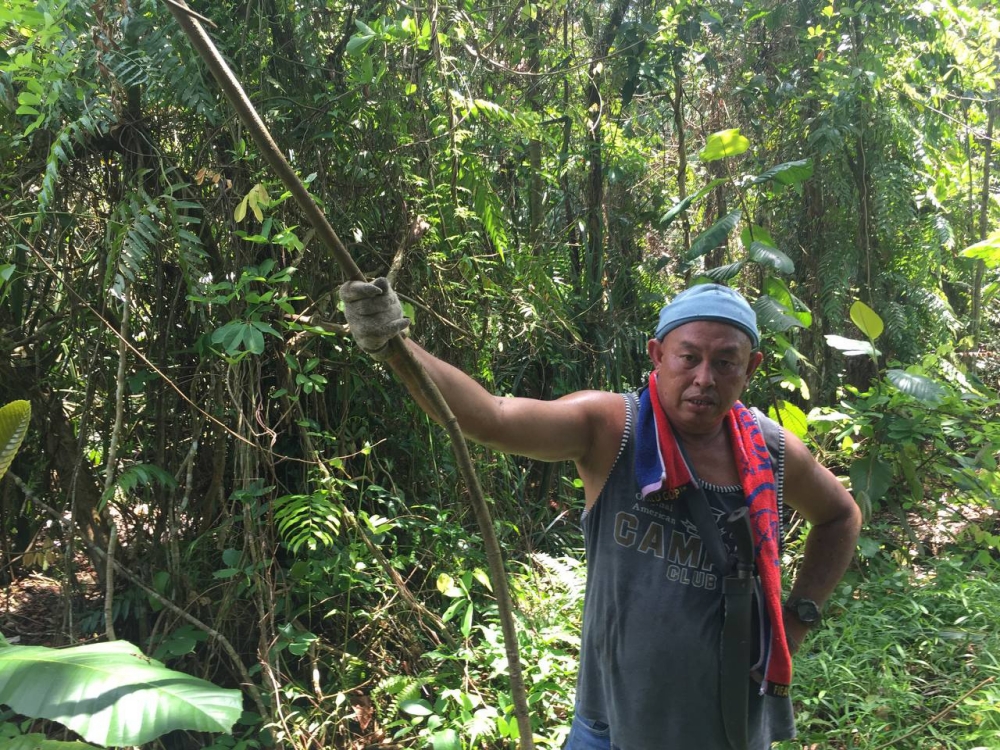 Sahzy’s father Sarbini Ahmad always helps source the materials to be used in his art projects.

Sahzy was well aware about the ongoing stigma associated with being an artist in Sarawak — that it was not something encouraged in society, even more so in his close-knit neighbourhood of Kampung Tabuan Melayu.

For a while, when he was younger, he complied with such condition.

“My big brother, Mohd Shahrol Nizul, was killed in a car accident.

“I don’t quite remember the year, most likely it was 2014 and he was 29 at the time, but it was in that moment that I realised the importance of doing what I love.

“It was that thought that had pushed me into becoming who I am now,” said Sahzy, the youngest of five brothers — the late Shahrol Nizul was the eldest.

Having a comfortable job in the civil service was never Sahzy’s goal, despite it being one for many people close to him.

“I never wanted it.

“Not many people understood my work and I never put the blame on them. They didn’t have the same kind of perspective as mine, so I had to go out and meet different people with different opinions.

“My parents have been super, super supportive, though at first, they did ask me: ‘Do you really want to do this?’

“To me, it’s a matter of connection – I know what I want, and I must explain it to my family.

“Again, you must not blame people for not understanding what you want, and why you want to do it.” 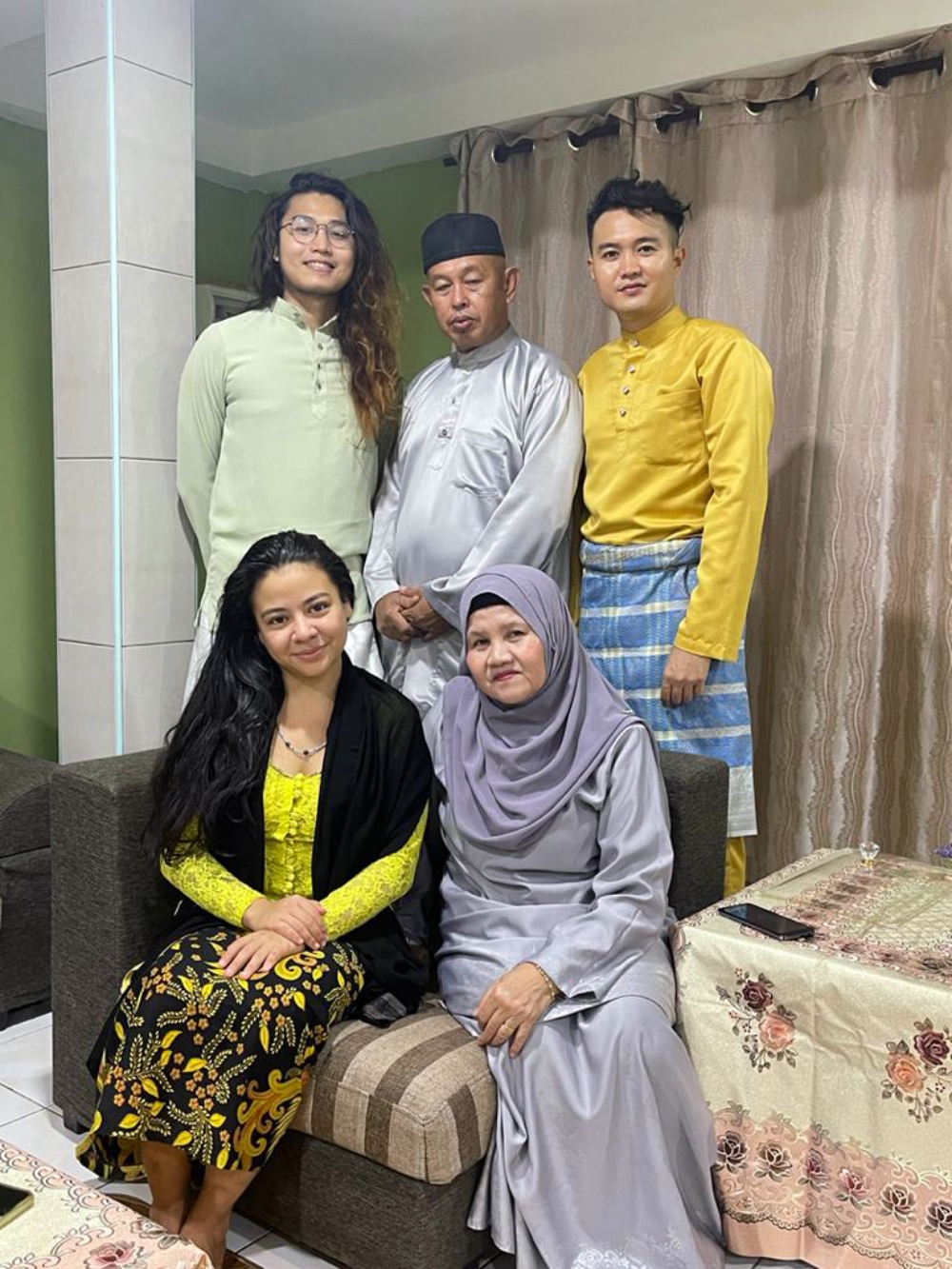 Sahzy said he could not ask for any better support from his family, and would forever be indebted to them for having his back.

“Now, they’re with me all the way. When I hosted a rooftop party for my preview recently, Mum and Dad prepared the food, with my brother helping out.

“Dad always helps source materials to be used in my projects,” he smiled.

Sahzy also mentioned another special person in his life – his girlfriend Maryam Evetovics, whom he regarded as ‘being instrumental in helping him find himself’.

“She and her parents, Tengku Hilda and Ivan Evetovics, have been giving me the fullest of support in terms of transportation, a place to stay and at times, financial assistance – though I never asked any of it.

“We’re not married yet, but they really treat me like a son.

“Their solid support really pushes me into being more focused on doing the things I love, and encourages my growth tremendously. I’m so lucky to have them in my life,” he said. 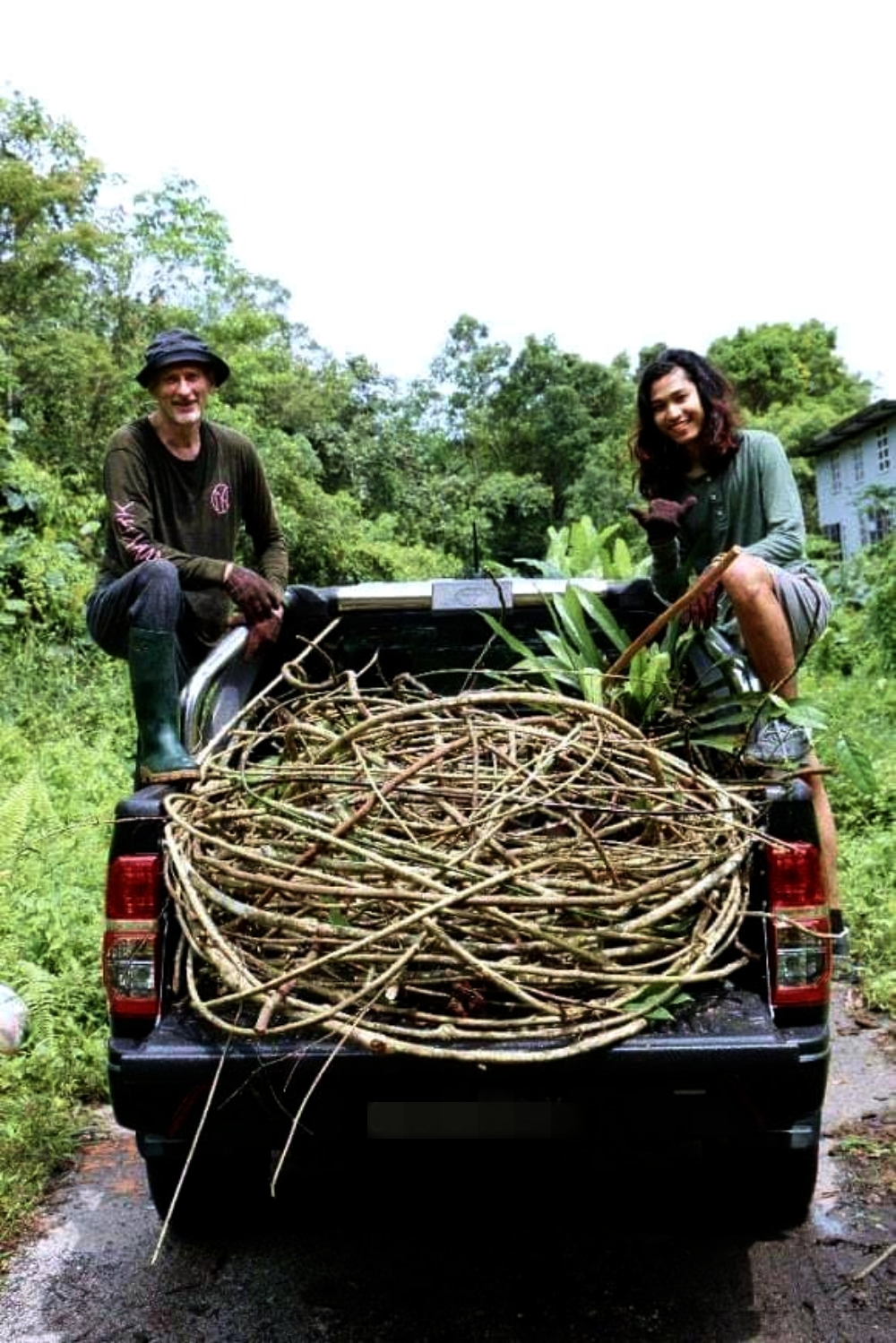 Sahzy and Byles during an offroad trip into a jungle area somewhere near Batu Kawa.

Sahzy might not be forthcoming about the exact site of his ‘jungle studio’, but he was open in telling me about having dropped out of a university in Cyberjaya, where he took a degree in film-making after graduating with a diploma in graphics design.

“My background in graphics did help me in my artwork, but the degree programme, I didn’t find it reasonable and I didn’t learn anything from it at all, so I chose to drop out.

“That’s when I started to mix around with the art community – that’s when I met Spencer (Byles) and the artHAUS folks.

“Without them, I wouldn’t have come this far, I wouldn’t have this exhibition, and I wouldn’t be talking to you right now. They have really pushed me to be more open, more outgoing and more daring, and encouraged me to share my creativity with others.”

It was not always like that at first, though, he recalled.

“Back then, I was really shy to ask anyone and I didn’t mix around much with the group.

“Later on, I realised that it’s the wrong way to think. You must try, you must communicate.

“Now, people start to recognise and appreciate the work and it’s good – it’s what I want.

“I’ve always known that I love to share stories, but now, I can share them with a broader audience.”

It was not ‘all arts and no play’ for Sahzy, however, whose film-making skills had helped generate income for him.

“Yes, I dropped out of the film-making degree programme last time, but that doesn’t mean I don’t like it. I do content videos, which is a revenue stream.

“I have worked with production houses and art departments and in addition to that, I love making my own videos,” said Sahzy, who cited futsal as his ‘totally non-art-related interest’. 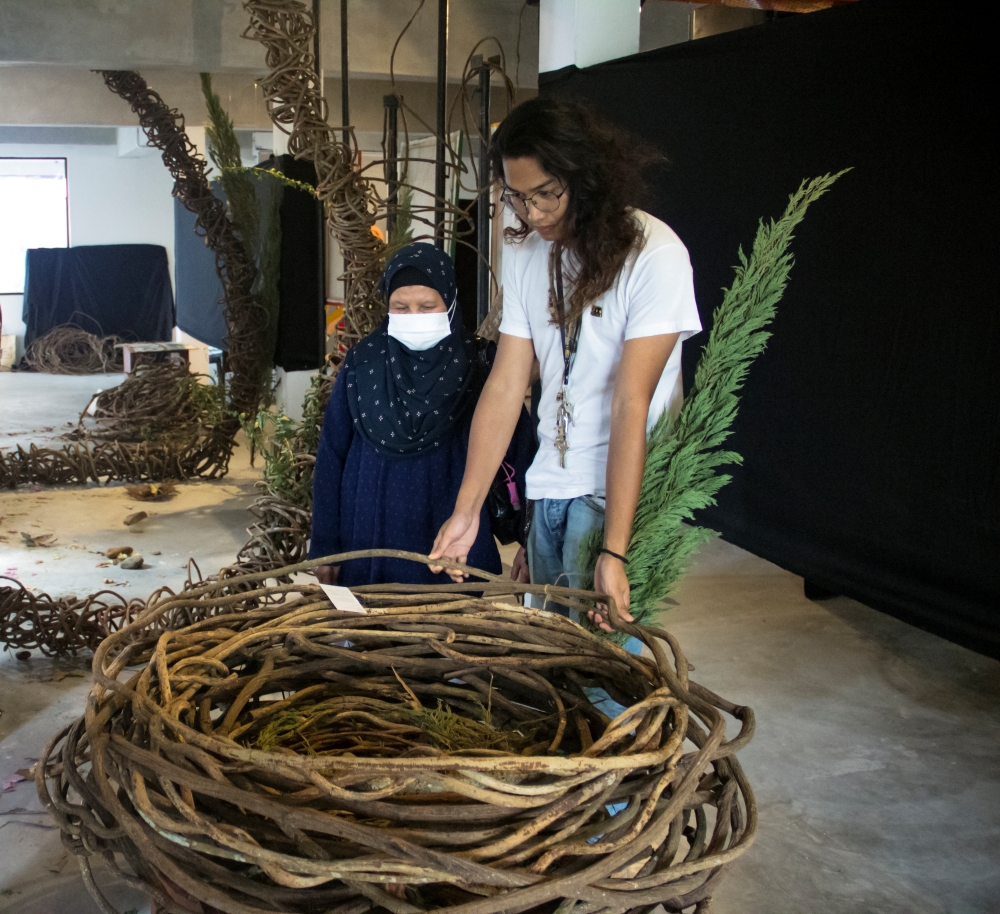 Sahzy explaining to his mother, Isah Lamat, the concept of the ‘nest’ component of the ‘Jungle Portals’.

Sahzy was all thanks to artHAUS for helping him do all the paperwork for ‘Jungle Portals’, allowing him to fully concentrate on the project.

His wish, though, would be to ‘dedicate’ the jungle sculpture to Mount Santubong.

“That would be great – to place it on a rather inconspicuous site where the hikers may come across it by chance, appreciate it, take nice photos, and spread the news.

“Only the portals and the nest, though – I do want to keep the painting,” he said.

On personal growth, the artist said the self-discovery process was still on-going.

“I’d want to know myself better, and to work on myself first so that I could connect better with my work.

“Hopefully in the future, everything would come together in terms of projects.”

On a broader term, Sahzy strove to keep working on his concept, and raising awareness of the importance of appreciating everything in nature, including the by-products.

“I began by working in solitary in the jungle, to be with nature and do my stuff; now, I have an exhibition where I get to share with others what I have done, so the next most sensible move would be to forge closer collaboration with the artHAUS community because they’re the ones who have helped me with the pitching, the paperwork and the organisation of events which have, in turn, facilitated the networking part for me.

“I’m also thinking about the possibility of being a part of the Rainforest World Music Festival, or other major events in Kuching.”

On top of these, Sahzy would be eyeing projects that could bring about strong and meaningful impact.

“This, of course, would require bigger funding, but I feel that I need to do it so that I would be able to hire many good talents from my village, Kampung Tabuan Melayu.

“It’s a way for me to give back to my neighbourhood.

“Hey, I have come this far – surely, I can make it work!” he enthused.

The ‘temu1’ exhibition at HAUS KCH runs until May 16, throughout which the resident artists are taking turns to host their respective features.

It is open to the public from 3pm to 8pm on Mondays and Thursdays, and 2pm to 9pm on Fridays and Saturdays. The hub closes on Sundays and public holidays.

Apart from Sahzy, the other resident artists are Carface, Ghali Foster and Joshua Teo. 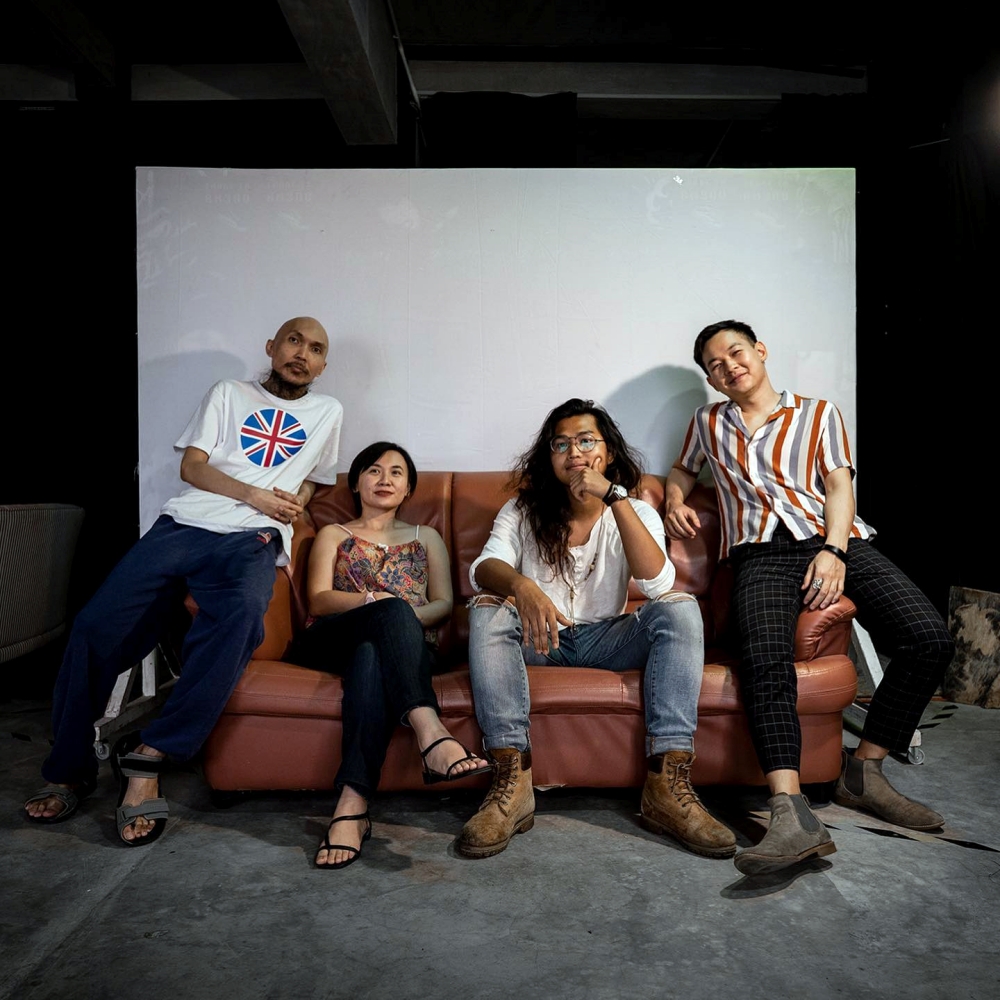 The artHAUS Creative Residency is partially sponsored by HAUS KCH, and produced by its director and co-founder Syed Syatbie Rusydie Syed Habib.

“We are honoured to offer the artHAUS Creative Residency as one such space.

“Working with these four artists has further ignited hope and encouragement in me for the Sarawakian creative industry.

“It is in the power of the local authorities to aid creative industry growth by working with local ‘placemakers’ to ensure that such growth is consistent and achieved with community consultation,” said Syed Syatbie Rusydie in a statement.

Meanwhile, HAUS KCH residency programme co-curator and director Sonia Luhong said she was encouraged by the ongoing positive reception to the programme, which was launched in late 2020.

“The full occupancy is a sign that grassroots participation is growing in the local arts scene, in addition to fulfilling a very real need among artists.

“As participation in art residencies is a valuable addition to any artist’s CV, we welcome those from within and outside Malaysia to apply for our artHAUS Creative Residency,” she said.

For more information, look for @hauskch on social media or email enquiries to haus.kch@gmail.com. 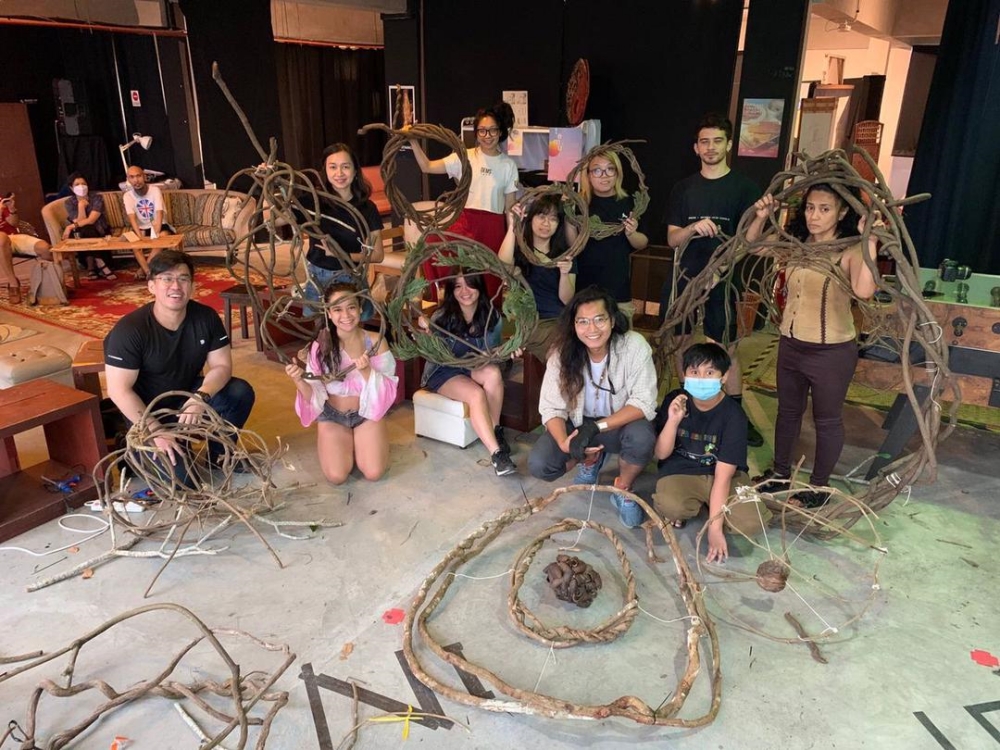 Sahzy with the participants of his open workshop on vine-sculpture, conducted on the last day of his exhibition run at HAUS KCH.

Previous ArticleGirl with special needs dies in house fire in Saratok
Next Article Of frogs, and freedom, and bundles of papers