Saturday, May 28
You are at:Home»Features»Love, compassion that never wane 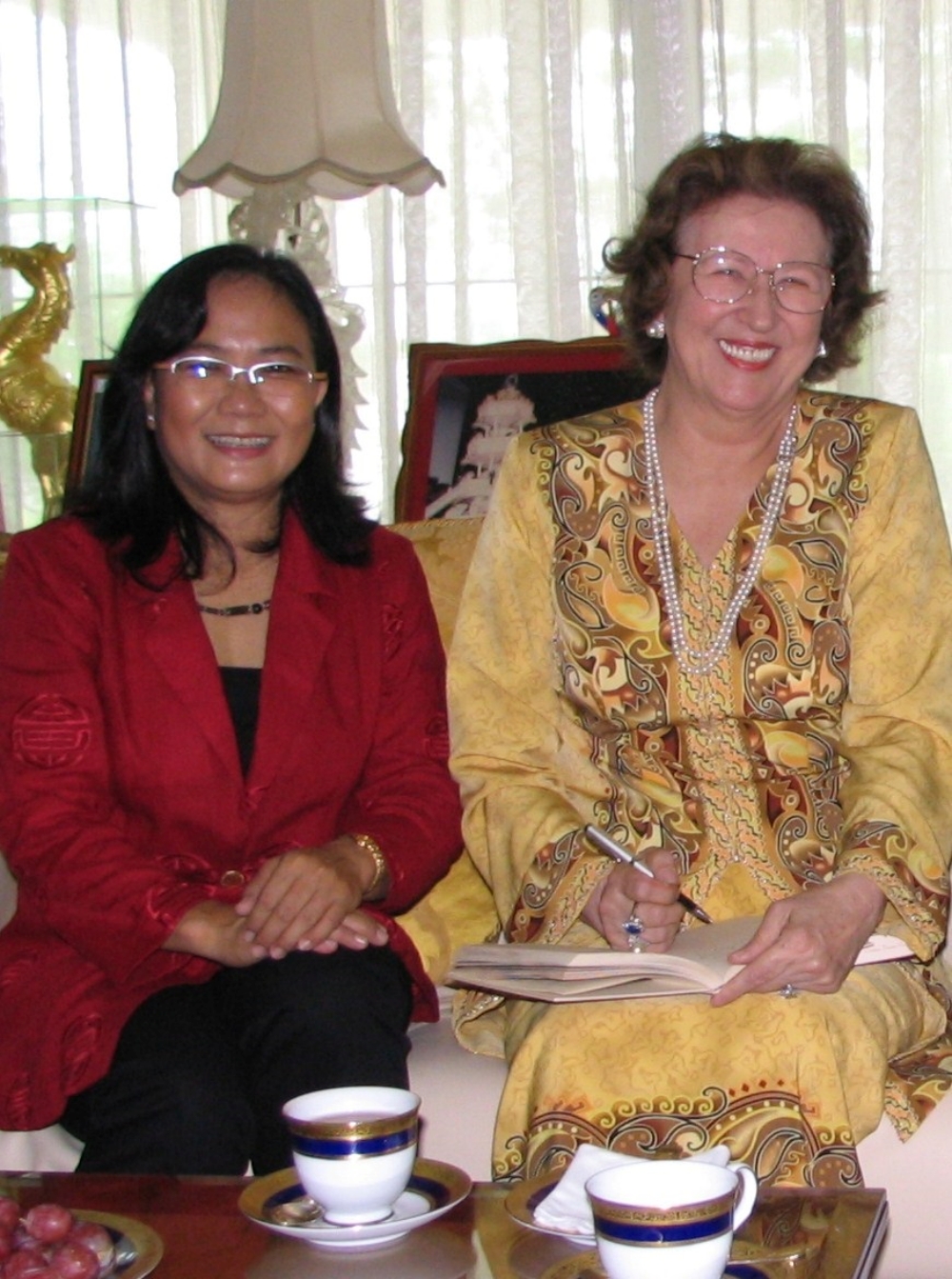 File photo shows Laila and the writer sharing some light moments at the former’s home.

THE Wednesday of April 29, 2009, dawned sombre over the residence of then-Chief Minister of Sarawak, despite the fine weather prevailing over Kuching. It was not until late afternoon that despite the clear blue sky, gloom gripped the state. The beloved wife of Pehin Sri Abdul Taib Mahmud, now the Yang di-Pertua Negeri Sarawak, breathed her last having fought a brave battle against cancer.

Sarawak mourned the passing of a great lady. To the non-governmental organisations (NGOs), the voluntary societies and the various institutions in Sarawak – the handicapped, the orphans, the sick and the needy, in particular, Datuk Patinggi Dr Hajah Laila Taib was the epitome of love and compassion.

Her supporting role beside the longest-serving Chief Minister of Sarawak has left a positive impact in the state. What she had achieved through the various NGOs and voluntary societies was a reflection of her aspiration and thoughts that found expression in her leadership through which she had contributed in no small measure to the state.

She was kind, patient, compassionate and selfless that Taib, in reflecting on her faithfulness, called her ‘my sufferer’. She was always there for him, even sharing the pains that he had to go through as a politician.

Many NGOs felt lost and forlorn the day she passed away. Many substantial aid projects were brought into being because of her. Laila would do all she could to help them achieve their charitable aims whether they were philanthropic, educational, religious, environmental or cultural.

I had the privilege of meeting Laila personally in her home many times over the last three years of her life. The meetings had brought me closer to understanding the hidden and private side of Laila and discover the rich treasure trove of humanity that she was.

Her kindness, her warm embrace, the bit of fun we shared in between serious conversations, her concern for others, all bespoke the expansiveness of Laila’s generous heart. She spoke ardently of the need to provide special amenities for the handicapped in public places, of caring for the orphans, of helping the sick, the needy and the underprivileged. 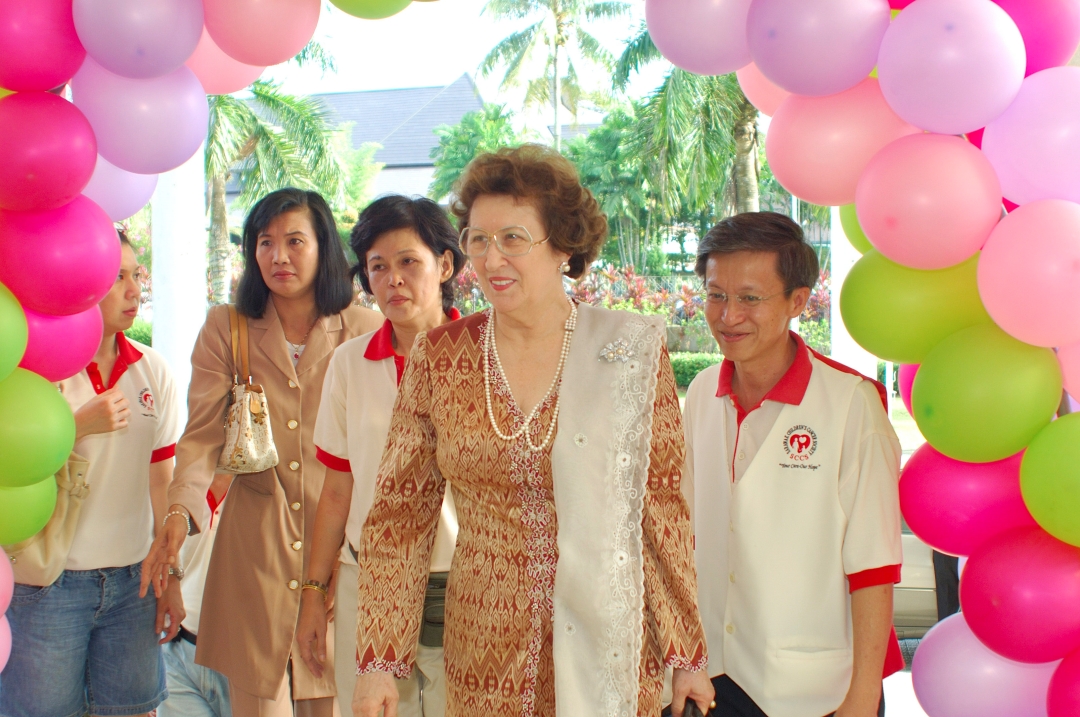 Giving her support to the Sarawak Cancer Society during one of its fundraising activities.

She remembered children suffering from dyslexia and also those afflicted with cancer, stroke and kidney failure. It was as if she had combed every area of suffering to find a way to help humanity. Her labour of love, charitable contributions as well as public image bore out her own narrative. For what she was, Laila had made her way into the hearts of the people.

Her saying: ‘Our greatest contribution in life is love and compassion’ resonated her own life’s journey. The profundity of these words can be grasped through her life of giving and sharing.

Even as a teenager living in Adelaide, Australia, Laila was passionate about helping others.

Her social commitment took root at a humble mosque on Little Gilbert Street, Adelaide. She joined the local Muslim community in caring for the elderly founding fathers of the Adelaide mosque, tending to their needs, helping them to cope with their frailty and arranging their funerals.

Her mother, who died of cancer at the age of 35 when Laila was only 11 years old, had a profound influence on her. She was a model of discipline who prepared her daughter well for the daunting tasks that she had to deal with after her untimely death.

As a little girl, Laila saw how her mother helped people in whatever way she could in their difficult times, particularly during the war. Even as a war refugee at a transit camp, she took the trouble to educate the women on the basics of healthy living such as good hygiene and balanced diet. Most of the refugees in the camp were farmers from the countryside and were unfamiliar with modern living.

The Adelaide mosque was also where they tied their nuptial knot.

Laila came to Sarawak with her husband and their first child in 1962 when the British colony was well on its way to independence. Not long after they arrived, Taib was appointed as a Crown Counsel in the Attorney General’s office.

Soon, a group of Malay elders offered Laila a teaching post at a local school, ‘Sekolah Menengah Rakyat’ (People’s Secondary School). Set up just a few years before her arrival, the school was in need of more teachers. The elders’ effort and enthusiasm in wanting to provide good education for the native children in nearby villages struck a chord with Laila and without hesitation, she accepted the post.

Being born in Poland during the European war, Laila had been to many places at early childhood with her parents in search of a new haven. The ugly effects of war had taught her to find her feet on new ground.

Taking the tempo of local life in her stride, sometimes she went to work by ‘sampan’ (small boat) as the school was situated in a flood-prone area. Her willingness to adjust to changes and to understand people as fellow human beings enabled her to adapt well to the social and cultural milieu in Sarawak.

“People are people. They have the same needs. We can’t say that Eastern values are better than the Western values. We have common values. We have families where there is love and care for one another and we have extended families, aunties, uncles and others.

“It is the same here as anywhere else,” she once spoke about the value of comprehending others. 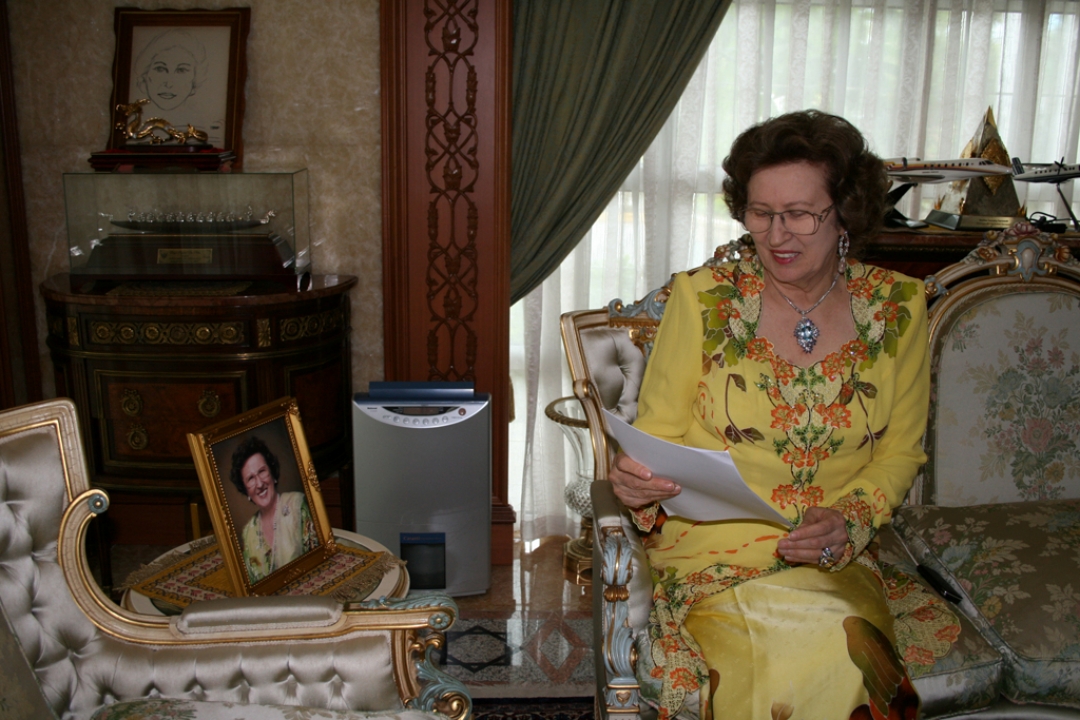 Laila at her favourite corner in her Demak Jaya residence.

Having seen much of the women’s state of affairs in rural areas during her frequent visits to the various parts of Sarawak with her politician husband, she believed that women should not isolate themselves.

“Women need each other for support and encouragement,” she had said.

In 1968, she was ready to take on bigger responsibilities when the family moved to the federal capital following Taib’s appointment as the federal Assistant Minister of Commerce and Industry.

After almost two years in Kuala Lumpur, she founded the Kuala Lumpur Speakers’ Club, whose members were mainly wives of ministers, where she became its first president. With the setting up of the club, the ladies could meet regularly as they took pleasure in learning public speaking skills, social etiquette and art of fine dining, which gave them a new sense of self-confidence and friendship.

Being actively involved in a number of voluntary organisations, Laila was personally chosen by the former prime minister Tunku Abdul Rahman Putra Al-Haj who was the founder of Muslim Welfare Organisation of Malaysia (Perkim), to set up its women’s wing. Subsequently, the National Women’s Perkim was formed in 1980, with Laila as its chairman.

Under her leadership, the organisation had spread its wings across the nation, setting up state committees, regional branches, orphanages and stroke centres.

Many, regardless of race and religion, had benefitted from its charitable projects.

When Taib was inaugurated as the Chief Minister of Sarawak in 1981, Laila would carry on with her charitable activities. She embarked on the setting up of Badan Amal Tenaga Isteri-Isteri Menteri dan Menteri Muda Sarawak (Sabati – or the Association of Wives of Minister and Assistant Ministers of Sarawak) in the same year.

She led the women in embarking on the ‘Heart-to-Heart’ project where huge funds were raised to enable many heart patients from poor households gain access to heart treatment and operation at home and abroad. She further blazed the trail by founding the Sarawak Heart Foundation (SHF) in 1997.

The foundation has been providing grants to hospitals and institutions of higher learning and medical professionals to conduct cardiovascular research. When the Sarawak General Hospital (SGH) started its cardiac services in 2001, SHF sponsored specialised medical equipment for the treatment, recuperation and rehabilitation of heart patients, including those who were financially disadvantaged. 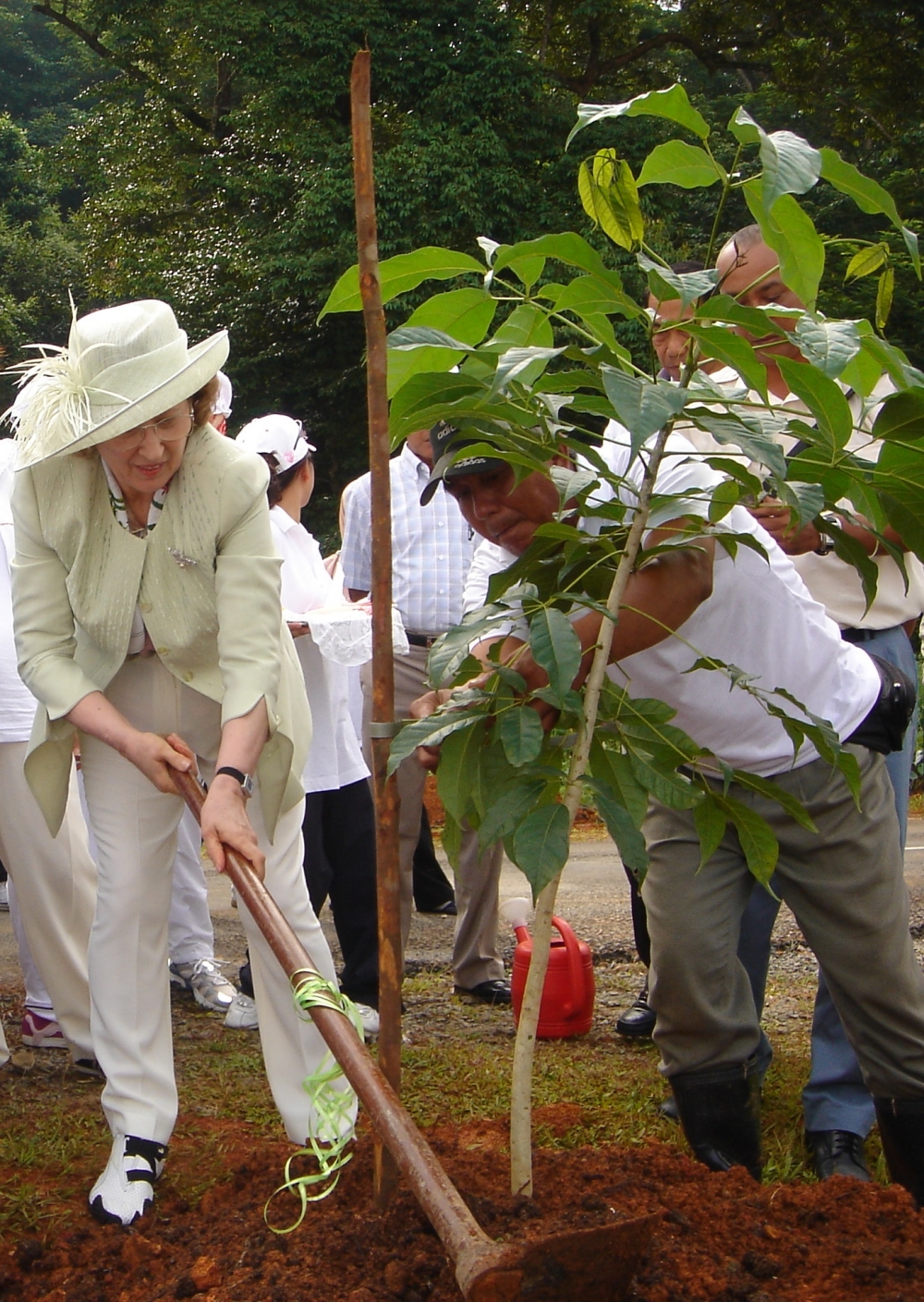 Laila at a tree-planting event in line with Sabati’s ‘Caring for the Environment’ project.

Laila’s contributions to society were enormous, touching the lives of the sick, the destitute, and the needy, and it would be unfair to single out a few when they were all as significant and valuable.

Laila’s legacy of love and compassion lives on. The NGOs and other organisations that she once was part of would continue to grow and flourish like trees whose earlier years were nurtured by Laila on a foundation that could withstand the challenges of time.

Her passing has left a void that may be difficult for these organisations to fill, especially by a person of Laila’s calibre and commitment.

Nevertheless, they remain forever grateful and indebted to Laila for having left behind a strong foundation upon which they can build on and work towards achieving the goals that she had set out.

Continuity a hallmark of her legacy

Continuity remains a hallmark of Laila’s legacy, as in her passing, her noble vision and mission have been passed on to organisations and individuals and held in high esteem as an important defining course.

This is evident in organisations that she was involved in and whose development programmes she had helped to improve. Thanks to Laila’s commitment to long-term social upliftment programmes for the poor and the needy, these organisations today are brimming with confidence and securely placed on a strong foundation to push on to a higher level of change and progress.

Indeed, Laila left an indelible legacy of love and compassion that many would be glad to tread on as they move beyond the familiar territory to a wider horizon of hope and progress in the years ahead.

Moreover, this legacy has inspired hundreds of men and women throughout Sarawak, as well as numerous philanthropic and volunteer organisations.

Laila’s name and footsteps will live on in the minds of many generations to come.

Previous ArticleZahid: Umno has to forget about working with PAS during GE15
Next Article Rainforest gliders by day and night