Saturday, May 28
You are at:Home»Columns»Nature Matters»Rainforest gliders by day and night 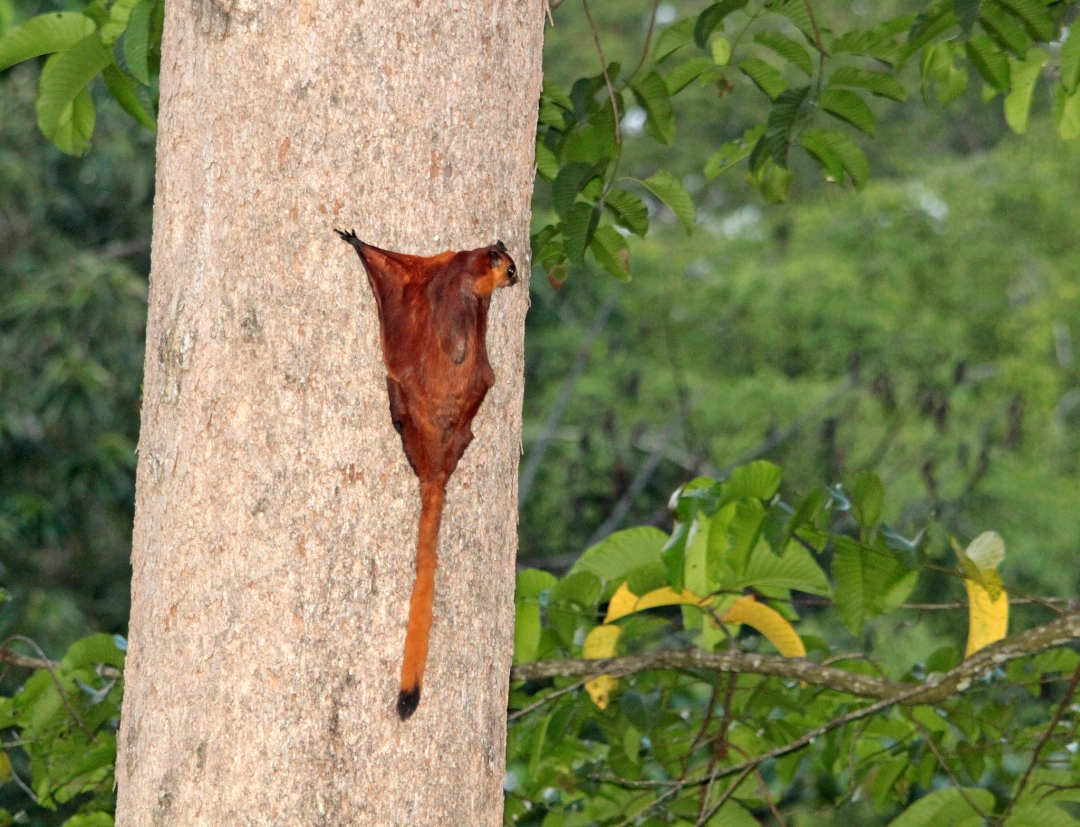 A red giant squirrel is seen on a tree. — Photo from Flickr/Vil Sandi

IT was in 1962, as a member of a touring theatre group of young amateur actors that I visited West Germany to enact the first three act play by an English theatre company after World War II. One day we were taken to the ‘Iron Curtain’ to witness its tragedy in cutting a village in half. Another day we were invited to go gliding. The thrill of sitting in a two-seater glider still lingers vividly in my mind. The towing vehicle to which the glider was attached suddenly released the tow cable and we were catapulted aloft.

Flying without the drone of an engine and to hear the wind eerily whistling around the cockpit canopy as the pilot turned the glider was magical. I became nervous when the pilot, an ex-Luftwaffe fighter pilot recalled his encounters in his Messerschmitt Me-9 with British Spitfires! It was a tremendous experience to be thrust up into the skies by rising thermals from the ground below and to be given the joystick for three minutes before landing on the grassy airstrip.

Besides watching hang gliders in alpine areas of Europe, I have seen gliding squirrels at night at Danum Valley and gliding snakes by day in a creek of the Kinabatangan River in Sabah. Both usually have the prefix ‘flying’ before squirrels and snakes, but this is a misnomer for they glide.

They glide through the air from tree to tree and have been observed to travel well over a distance of 150 metres, by opening or stretching out their legs to enable a fold in their skins between their fore and hind legs to open. This membrane or ‘patagium’, when stretched, acts like a sail or parachute. They wiggle their tails much like rudders to steer, weaving around trees by tensing their muscles.

The male squirrel (a boar) and the female (a sow) live together in hollows high up in trees in undisturbed primary forest with the birth of one or two young annually. Their peak breeding season is from April to June. The larger giant flying squirrels have head to body lengths of 40cm with a similar tail length and weigh the same as a domestic cat, at about 2kg. Many of the species are nocturnal in their search for food partly because by daytime they would be easy prey for hawks.

Owing to their low elevational range, they are affected by habitat degradation to make way for palm oil plantations. Some species have located close to kampongs and have even been known to form bonds with villagers, no doubt looking out for tasty titbits! They are banned as pets, for whilst appearing ‘cute’ when young, as they grow older, they can give a sharp and deep bite! Most species are classified as ‘Endangered’, and little is in fact known about these mammals and only a few in depth studies have been accomplished.

Robert Shelford (a former Curator of Sarawak Museum) in his 1916 book, ‘A Naturalist in Borneo’ gives a very detailed description of how the flying squirrel glides by using its skin flaps. 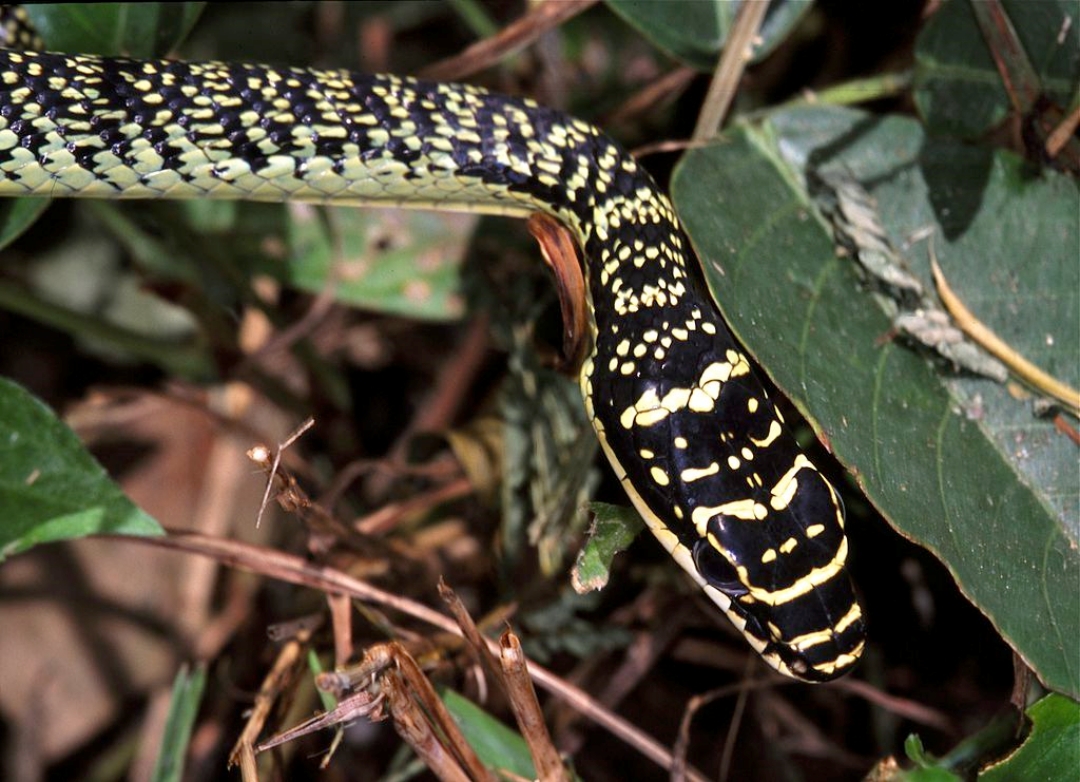 The golden snake is among those with the ability to glide. — Photo from Wikimedia Commons/Bernard Dupont

Whilst mildly venomous in affecting small prey, their fangs are short and located at the back of their mouths. They can only inject venom into their prey when the latter is deep into their mouths. Thus, their penchant for small prey such as birds, bats, frogs and lizards which are killed by their powerful crushing jaws. Some humans have received deep bites from these snakes but have not been affected by their venom.

There are three species of gliding tree snakes in Borneo: Golden or ornate snake, Paradise snake, and Banded flying snake, all of which are active by day.

How do they glide?

Their movement through the air may be likened to the aerodynamic properties of a child’s frisbee. Using its ridge scales along its underside, it pushes up against the bark of a tree, climbing vertically up the tree. Once at the very end of a branch it selects its area of landing and propels itself by lifting its body upwards, leaping away from the tree, and sucking in its abdomen and pushing out its ribs to create a wing-like shape, wriggling its body through the air until it crash-lands rather clumsily. This concave wing, a C shape, is created by flattening and doubling the width of its body and thereby equating to the cross section of a frisbee. These snakes can glide for up to 100 metres and the smaller of the three forementioned, the Paradise tree snake, at nearly a metre in length, is by far the best glider.

Shelford wrote, “On cross examination I found out that ‘by flying he meant to say that the snake shot out at an angle from the tree and descended an oblique angle to the ground with its body held quite straight.”

Shelford wrote quite authoritatively about these snakes “hinged ventral scales allowing them to draw their belly inwards”. His experiments with gliding snakes are best read in Chapter 3 of his book. Sir David Attenborough, the renowned British naturalist, in his book, ‘Life on Air’ also details, albeit briefly, his experiences together with his cameraman of a gliding snake.

Very little is known about the habits of these snakes other than the fact that they lay between six to 11 eggs which hatch into 15cm to 20cm long young ones. Whilst not classified as an endangered species, they are vulnerable to attacks as they glide through the air by birds of prey

Other animals, found in Borneo’s lowland primary forests, have the ability to glide such as the Flying lemur, Wallace’s tree frog and lizards. I count myself a very fortunate person to have witnessed two of Borneo’s gliding species in flight and to have experienced what gliding in thermals feels like.