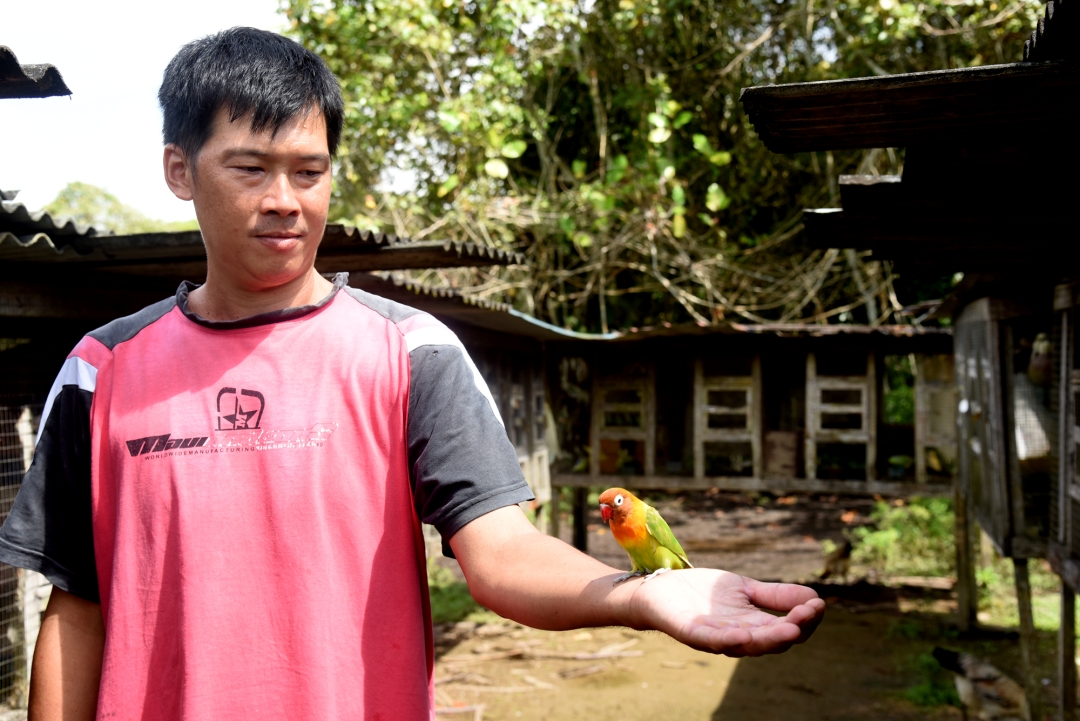 Too, with a little Sun Conure resting on his wrist.

TUCKED in a small pocket within the Igan Delta is a special animal farm where visitors get to see a range of rare birds amongst its ‘resident critters’.

Sited on a five-acre land nestled in Telok Bango, the mini-estate belongs to and is managed by Too Ching Ngei, whom many have nicknamed ‘Dr Toolittle of Sarawak’ – a wordplay of the name of the protagonist in Hugh Lofting’s famous series of children’s books published in the 1920s.

Though not a veterinarian like the fictional Dr Doolittle, Too loves animals and holds a special affinity with rare birds.

“I’m so passionate about them (rare birds) and I have worked really hard to be able to rear them. I hold a licence, granted by Sarawak Forestry Corporation (SFC), to run my property as a ‘Commercial Wildlife Farm’ under the Wildlife Protection Ordinance 1998.

“As you can see here, among the set licensing conditions is for me to display this permit at a conspicuous place, and that the property address must exactly match the one written on the document – Lot 213, Block 10, Engkilo Land District, Telok Bango, 96000, Sibu,” he told thesundaypost when met during a visit to the farm recently.

Thanks to this special permit, Too’s farm now houses 387 rare birds amongst over 1,000 animals. 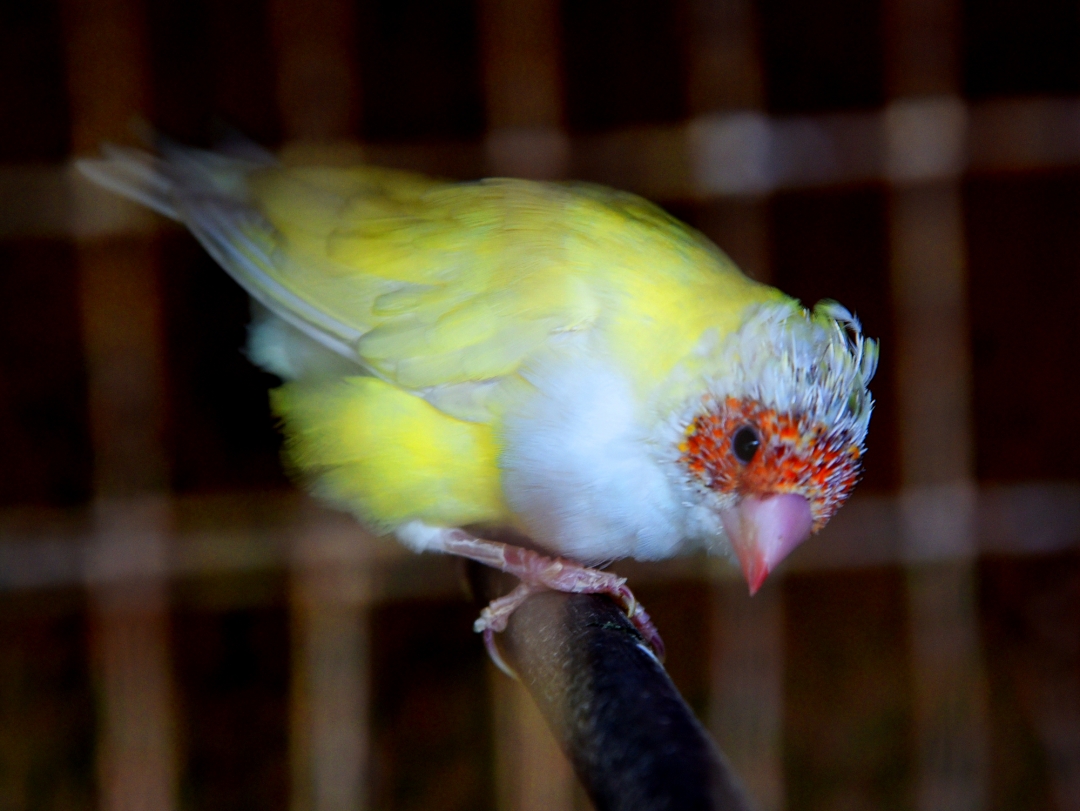 Judging by the bright yellow feathers on its body and some orange-red ones around the eyes, this could be a Gouldian finch.

A bit of history

Too, 37, set up his animal farm about 10 years ago, making full use of a tract of land that his mother had acquired many years before.

“She bought that land to be near her parents.

“I later turned it into what I has since called ‘my secret garden’ – it’s how I describe it to my friends and visitors,” he smiled.

His mother’s family is among those of a Foochow farming community now living in Telok Bango – a site at a secluded bend of Sungai Bidut, a tributary of Igan River, and is about 10km from Sibu town.

Sungai Bidut used to be home to a large Foochow community back in the early 1900s, but because of World War II and the Communist Insurgency in Sarawak that came after that, majority of them relocated to the more secure Sibu town where hundreds of former rubber tappers and vegetable farmers later found jobs as labourers and construction workers.

Some other Sungai Bidut folks had even gone further up to Marudi, Miri, Limbang and Lawas.

During the Insurgency (1962-1990), Sungai Bidut was labelled a ‘Black Area’ – a reference term used by Rajang Area Security Command (Rascom), a security authority set up in 1972 and run under the leadership of then-chief minister Tun Abdul Rahman Ya’kub, as means to counter the communist threat in areas across Sibu, Sarikei and Kapit divisions.

This ‘exodus’ resulted in Telok Bango becoming a ‘ghost neighbourhood’ during the Rascom days, leaving many houses, barns and farm huts derelict.

Only the Ibans had stayed put.

However, in the years after Rascom was declared over in 1990, many Foochow families who had fled previously, had come back to Telok Bango and begun working their lands once again, alongside their Iban neighbours. 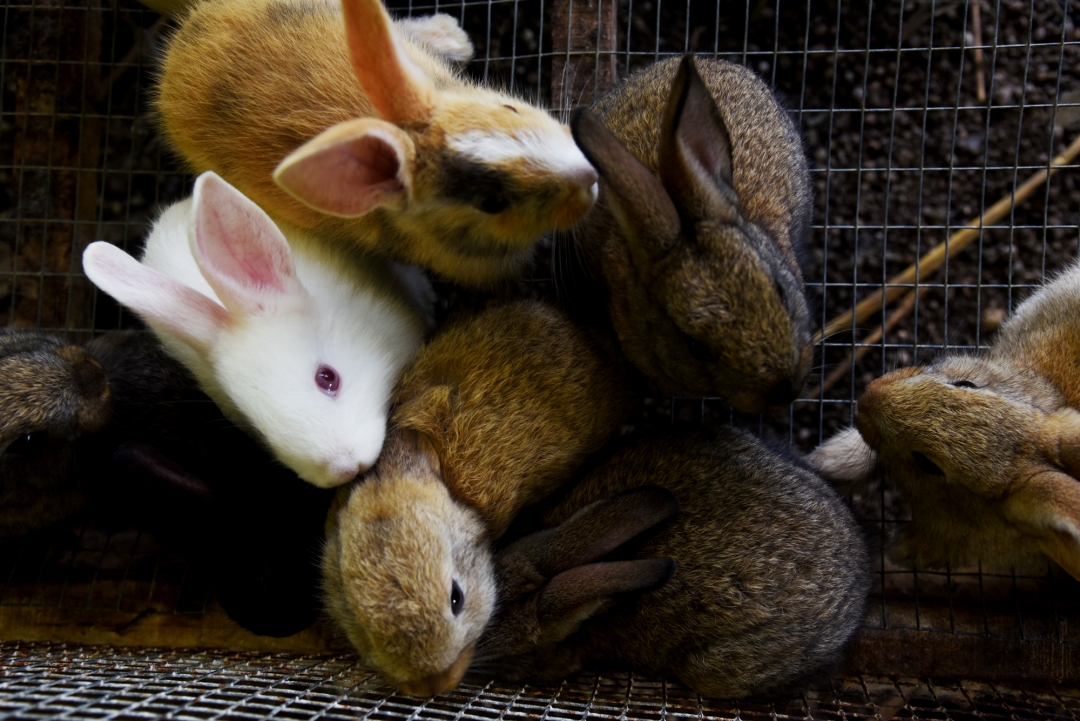 These cute little rabbits are amongst the ‘resident critters’ of Too’s animal farm.

With better road connectivity these days, augmented by the bridges across the Igan and Lebaan rivers, the lives of many communities around the Rajang River Basin have improved tremendously.

Too said it was not like that at all three decades ago.

“I remember how my mother and her parents, just like other Telok Bango folks, would row small boats down to Sibu town to get their supplies or attend to official matters. In fact, they hardly went to town unless it’s for important affairs.

“Even 15 years ago, when I was in my early 20s, many rural deltas within the Rajang Basin area could only be reachable by boats.

“Now, there are roads connecting many areas here to Sibu, enabling travelling via land.

“This encourages more people from Sibu and other parts of Sarawak to go these areas within the central region of Sarawak, because they know that it can be a day-trip getaway, instead of half-day journey using boats.

“The just-finished Lebaan Bridge, in particular, facilitates travelling for the folks from the small coastal towns like Belawai, Tanjong Manis, Matu and Daro,” he said.

The good road connectivity is also a boon for Too’s farm, which also houses farmyard animals such as chickens, ducks, geese, turkeys, rabbits, and goats. 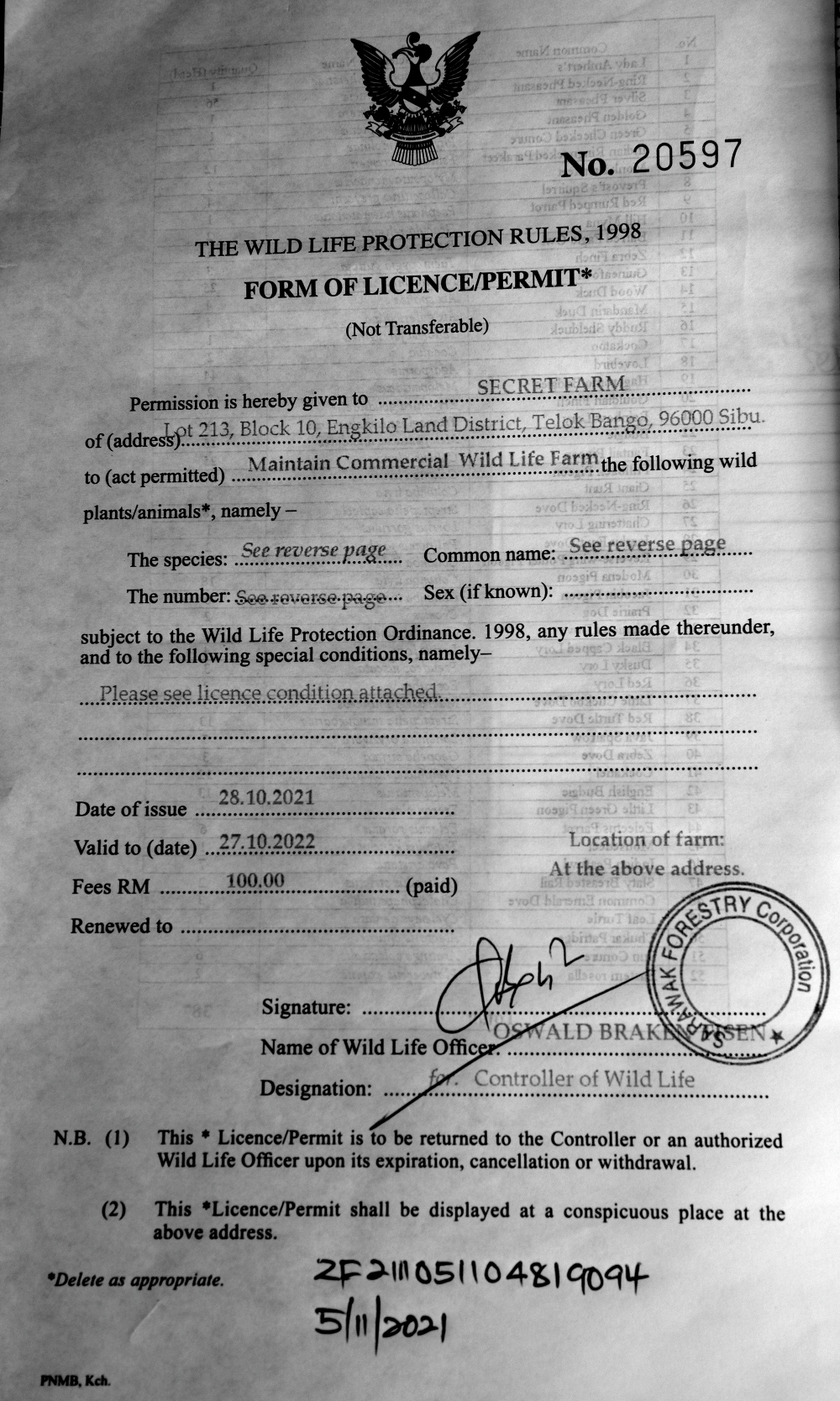 Photo shows the licence signed by SFC Controller of Wildlife, permitting Too to run his property as a ‘Commercial Wildlife Farm’ under the Wildlife Protection Ordinance 1998.

Born and raised in Sibu, Too said even at a young age, he already felt that he would one day be wholly involved in a venture closely associated with his love for wild animals.

“What was originally a hobby, is now a full-time job.

“I have more animals than I did when I started running this farm.

“The number of visitors has continued to rise, especially during school holidays.

“I strive to improve the farm every year,” he said, adding that from time to time, the SFC would send some officers to inspect the farm.

“So far, they have been giving me very positive feedback, and they’re impressed by the job that I have done.”

Too regarded his farm as testament to his hard work, determination and perseverance.

In this respect, he was open about having dropped out of Methodist Pilley Institute in Sibu, where he once majored in a Business Management programme.

“Never get discouraged even if you did not get complete your college education.

“I didn’t complete mine, yet I strove forward and worked really hard.

“I now enjoy managing my farm, with the help of my parents and a few workers.”

Another thing that makes him happy about his operation is that with the licensing under the Wildlife Protection Ordinance 1998, he is allowed to operate commercially – meaning, he is permitted to sell the animals reared on his farm.

“The receipts that I provide to the buyers upon the completion of any transaction, is proof that they have bought the animals legitimately from me; that they have not caught them illegally in the wild.

“With the official receipts from my farm, the buyers can legally keep the wild animals that they have bought from me,” he added. 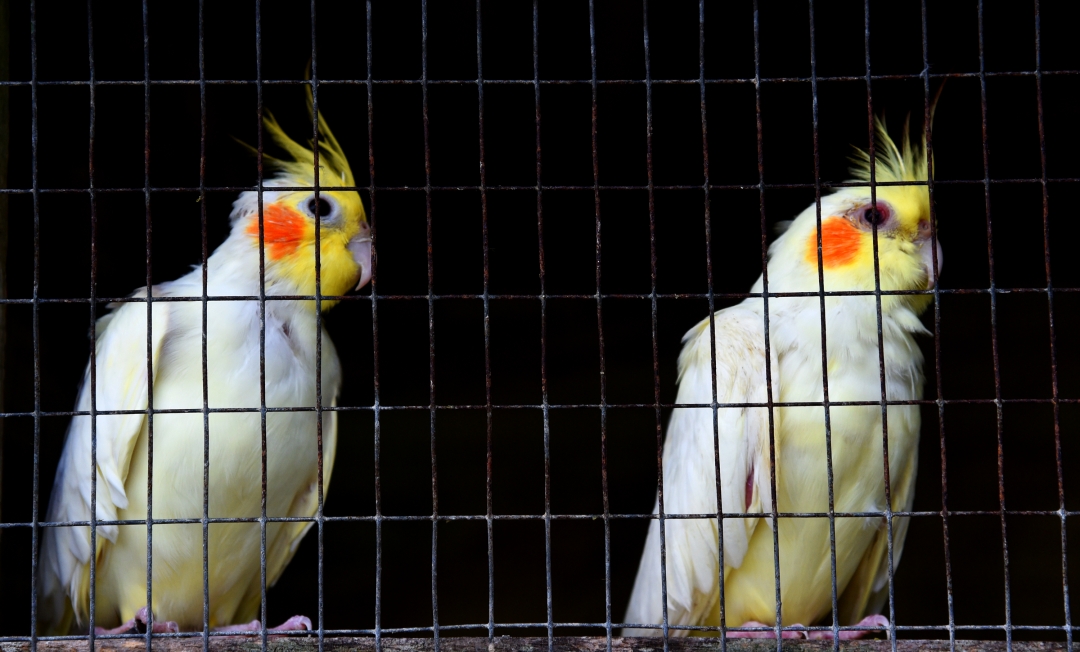 This pair of cockatiels appears to be welcoming visitors to Too’s farm.

Too, however, acknowledged that any business undertaking would have its ‘good days and bad days’ and in the case of the Covid-19 pandemic, it had been very challenging throughout the past two years.

“Yes, it’s been really hard because of the pandemic, but in general, rearing wild animals has never been an easy task either, as there are lots of costs and many other factors involved such as their slow growth. These animals need specific care and upkeep.

“My niche farm has been in existence for 10 years already, but it has not been smooth sailing at all times.”

According to Too, animal feed and veterinary services could reach up RM5,000 per month.

The SFC had, several times, advised him to charge every visitor an entrance fee to generate extra revenue to cover some of the expenses.

On this, he remarked: “Yes, I have a commercial licence, but I have no intention whatsoever to start any eco-tourism-like business like those done by many in Kuching.

“My focus is on rearing these rare birds and other animals, and running this pet business.”

On a related subject, Too highlighted the importance of having proper knowledge in taking care of rare animals for those wanting to become exotic pet owners.

“They must have high awareness and understanding of the delicate and sensitive nature of these animals, their habits and their needs.

“Be observant and learn everything you can about the animals that you want to buy, especially about the kinds of illnesses that can strike them. Being an animal owner is not a ‘three-minute enthusiasm’ – it is a full commitment,” he emphasised. 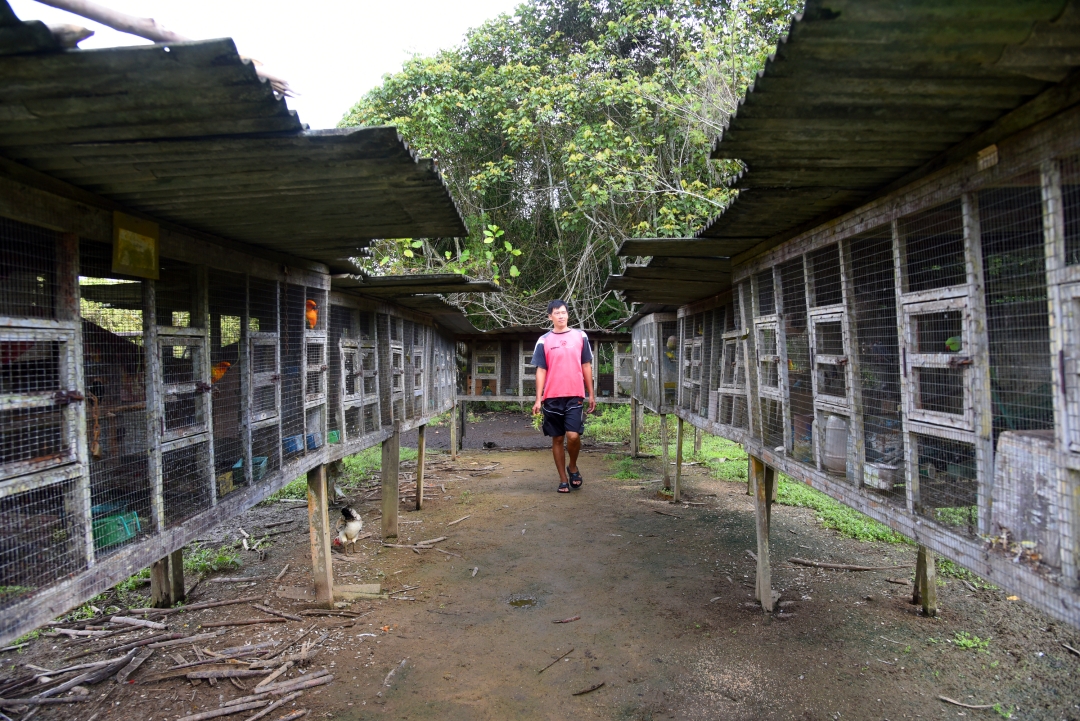 Too conducts his daily checks on the birds and other animals at his farm.

The recent visit to Too’s farm was indeed a very rewarding experience, especially for several photography enthusiasts who was with the writer during the trip.

Seeing how close and affectionate Too was with the animals, it was truly fitting for him to be nicknamed ‘Dr Toolittle’.

Previous ArticleIt’s time to recollect
Next Article Mother’s Day: Woman for all seasons