Friday, July 1
You are at:Home»News»Sarawak»Chong: Focus on real economic issues instead of discussing ‘local party vs national party’ issue 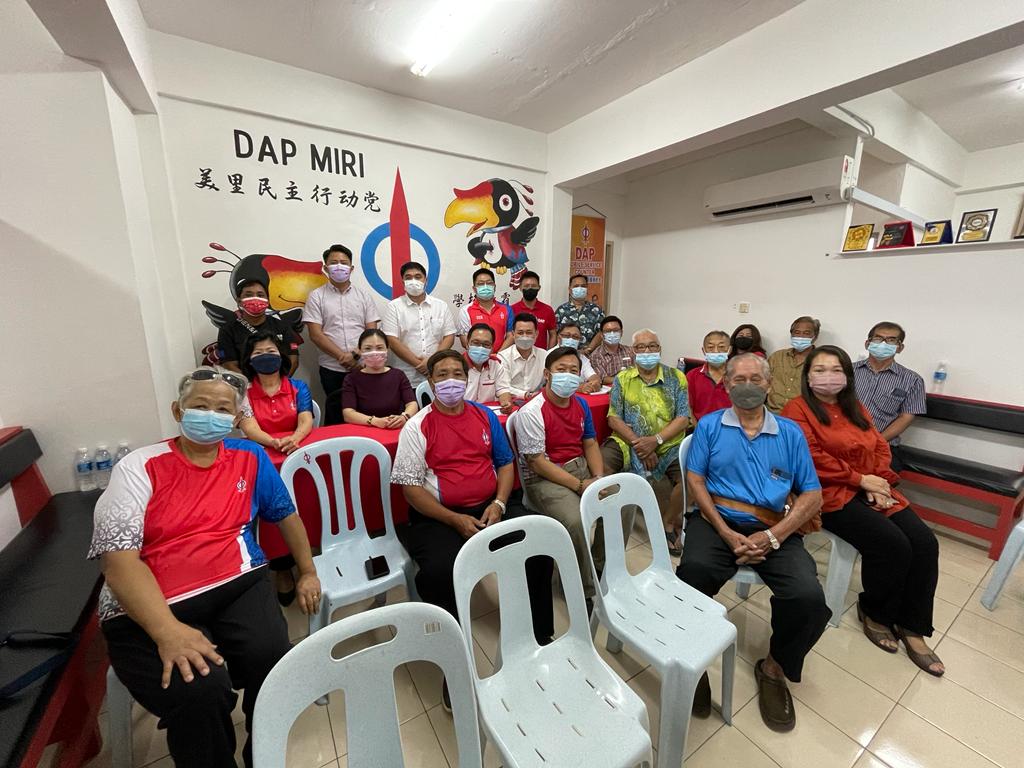 Chong (seated third left at the table) in a photo call with other participants after chairing a dialogue session held at the party Miri headquarters here yesterday.

MIRI (May 16): Sarawakians should refocus their attention on the real economic issues affecting their everyday lives rather than worrying about whether they are being governed by a local or national party-led state government, said Democratic Action Party (DAP) Sarawak chairman Chong Chieng Jen.

“For the past two years, the issue of local or national party has been played up so much that a lot of policymakers and politicians have lost fact of the real issue affecting the people everyday which is the economic issue.

In this respect, Chong regarded the discussion on ‘local party vs national party’ issue as a diversion strategy by the Gabungan Parti Sarawak (GPS).

“GPS is diverting the attention of the people into discussion of the real issues affecting the people.

“I think as a national and responsible political party, we want the people to refocus on the real economic issues that affect everybody.

“We want the ruling government to seriously address these issues and not to divert the attention of the people into something that is very hypothetical discussion of political issues,” he added.

Chong said another issue that concerned all Sarawakians was the so-called ‘rich state, poor people’ situation in Sarawak.

“We all know that Sarawak is a rich state, rich in resources and Sarawak government has over RM30 billion reserves, making Sarawak the richest state government amongst all the 13 states in the country and yet our poverty rate is ranked the third in the country.

“Obviously, despite having rich state government the people of Sarawak among the poorest in the country. That says it all, why this management of resources are not spent for the benefit of the people?

“These are the real economic issues that the people are facing everyday and all these years, Sarawak is governed by the local party.

“The problem facing our people is not whether this is local or national party but governance policies and economic challenges that the people are facing.”

Chong opined that the government needed to address not only in the weak ringgit but also politics that have contributed to the escalating inflation.

“To me, this discussion of local or national party is not the real issue affecting the people’s lives but a diversion technique of GPS to cover up their failure or divert people’s attention on their failure to properly manage the state and people’s affairs in politics.

“Therefore, we should not continue to fall into such trap and lose focus of everyday real issue facing the people,” he added.

On a similar note, Chong said the price of pork has increased by between 10 and 20 per cent or RM2.50 per kilogramme starting yesterday.

“This price of pork is something the state government has a say in but so much talk about local party.

“I raised this issue because it affects the people at large. Every day, cost of living is the real issue that needs to be addressed and politics is about the management of the country and the people’s affairs,” he added.

Prior to the press conference, Chong and other state DAP committee members conducted a dialogue with their grassroot members in Miri.

The one-and-a-half hour dialogue saw the participants sharing feedbacks and views to determine future direction of the party.

“It was a very fruitful discussion and one thing that is certain coming out from this discussion is everyone bear in mind the impending parliamentary election.