Saturday, December 3
You are at:Home»News»Court»Ex chairman: Najib advised 1MDB as both PM and finance minister 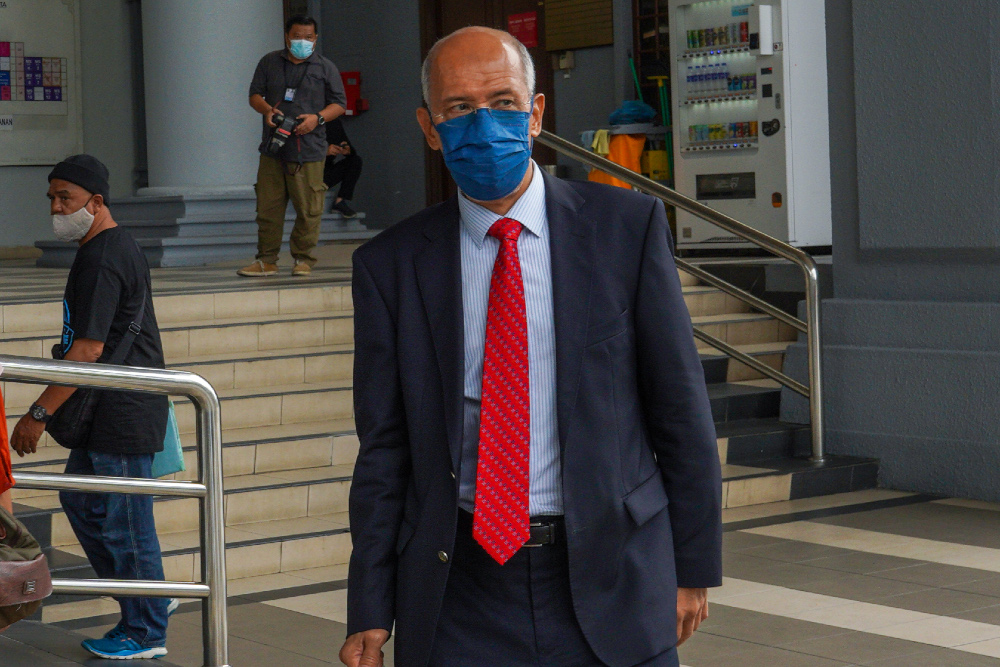 KUALA LUMPUR (May 17): Datuk Seri Najib Razak as the finance minister and prime minister previously was also the one providing advice to 1Malaysia Development Berhad (1MDB), as 1MDB’s board of advisers — which he was chairing — had yet to be formally set up, the Finance Ministry-owned company’s former chairman told the High Court today.

Former 1MDB chairman Tan Sri Mohd Bakke Salleh said this while testifying as the 15th prosecution witness in Najib’s trial over the misappropriation of more than RM2 billion of 1MDB funds.

Bakke was chairman of 1MDB’s board of directors briefly, including from when the company was renamed from the Terengganu Investment Authority (TIA) in September 2009, until his resignation in October 2009 over his dissatisfaction with how the company’s management disobeyed the board of directors while handling a US$1 billion investment.

However, Bakke confirmed today that the 1MDB board of advisers had yet to be formalised by the time he resigned as 1MDB board of directors’ chairman on October 19, 2009, agreeing that this was a critical component of 1MDB as it was in the company’s constitution or Memorandum and Articles of Association.

Today, Najib’s lead defence lawyer Tan Sri Muhammad Shafee Abdullah insisted that there could not be a chairman of the board of advisers without such a board actually being set up, but Bakke said Najib had actually carried out such an advisory role in the latter’s capacity as finance minister and prime minister then.

Bakke: Well, if you specifically look at that provision, yes I agree with you, but in the case of 1MDB, the prime minister, the minister of finance, the chairman of board of advisers, all very much you know, being intertwined and you know, being anchored and handled by one individual.

Shafee: So what’s your point?

Bakke: So it was supposed to be separate, a separate board in the case of board of advisers. But it was something that had not been formalised yet, and in the meantime, in the interim, the prime minister as well as the minister of finance took charge in the decision-making and I suppose plugged whatever gaps that existed to make things happen at 1MDB, so that the operations and the flow and the decisions would not be interrupted, so that’s who things panned out eventually.

“But you were saying because it was not formally constituted, the position of chairman was not there, in terms of executive, it doesn’t have any executive. That I agree with you.

“But as a result of not having a proper and sitting board of advisers then, decisions that were linked, or rather the role of providing advisory services, in my opinion, was handled by the prime minister who was also the minister of finance,” Bakke replied.

Shafee when on to cite the specific provision in 1MDB’s company constitution on the chairman of board of advisers as having a limited role on passing advice from the board of advisers to 1MDB’s board, with Bakke then saying he could agree on this point based on what was enshrined in the company’s constitution.

Other prosecution witnesses such as former 1MDB director Tan Sri Ismee Ismail had in the past also told the High Court that they viewed Najib to be the same person wearing different hats as the prime minister, finance minister and chairman of 1MDB’s board of advisers.

Today, Shafee and Bakke also engaged in a brief war of words, with Bakke telling the lawyer not to put words in his mouth.

Shafee was suggesting that Bakke had previously said that perhaps he ought not to resign that fast as the 1MDB chairman, with the benefit of hindsight.

Bakke then cited what he had actually said previously in a separate trial against Najib over the alleged tampering of the Auditor-General’s audit report on 1MDB, shooting back: “I didn’t say that, no, I think you are putting words in my mouth. My memory is still ok. What I said was, with benefit of hindsight, I should not have accepted the offer to serve on 1MDB.”

Shafee then sought to explain he was basing this on what Bakke had told Parliament’s bipartisan watchdog Public Accounts Committee (PAC) previously, saying: “Let me show you, I may be older than you, but I’m not having a mind that is not focused. You made statement in PAC, you stand by what you said in PAC?”

While confirming that he stood by what he told the PAC, Bakke also explained that he saw that the PAC’s report of the proceedings of the enquiry into 1MDB did not fully capture what he had testified, noting that “a lot of what I said was not reported” including a key condition that he had told the PAC about the US$1 billion investment.

“One of them when I also spelt out the four conditions that the money was to be credited to the joint account of 1MDB-PetroSaudi International that was not mentioned in the final report of PAC.

“So how it was recorded and the way my testimony was eventually written in the PAC report, I had no control, I had no oversight on that, doesn’t mean that what you read in PAC doesn’t mean it represents what I had said in that session,” Bakke explained.

Shafee suggested that Bakke seemed to be “very defensive” and remarked “are you aware you are a witness, not an accused person”, to which Bakke then said he just wanted to give his side of the story. – Malay Mail