Tuesday, October 4
You are at:Home»News»Court»Witness: Altantuya lodged police report stating to look for Razak Baginda if something happened to her 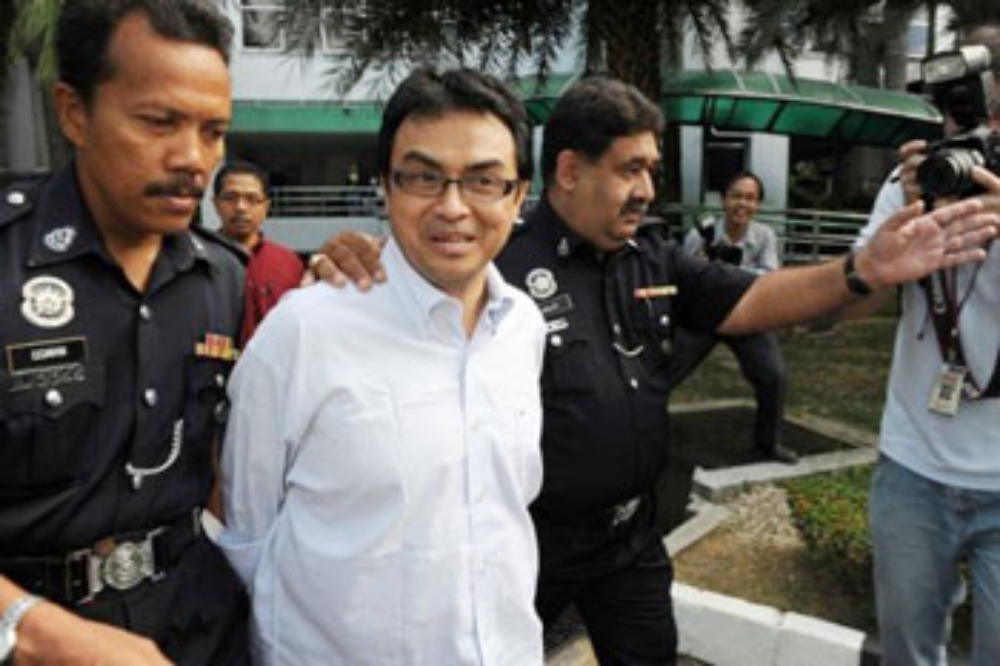 File photo of Razak Baginda being apprehended by police to court in 2008. – AFP photo

SHAH ALAM (May 18): The High Court here was told today that murdered Mongolian woman Altantuya Shaariibuu had lodged a police report the same day she went missing almost 16 years ago stating that ‘if something were to happen to her, they should look for Razak Baginda’.

Supt Tonny Lunggan, 42, the investigating officer in the murder of the woman said on Nov 3, 2016, DSP Gan Tack Guan had contacted him by phone to inform him that a police report had been lodged by Altantuya at the Tun H.S. Lee Police Station at 1.08pm on Oct 19, 2006.

“I checked on the police report through the Police Reporting System (PRS) and printed it out. I found it to be true that the police report was made by Altantuya and informed DSP Gan and Supt Zainol Samah about the report.

“I remember one thing very clearly. Altantuya stated in the report that if something were to happen to her, to look for Razak Baginda (political analyst Abdul Razak Baginda),” said the 26th witness when reading his witness statement.

He said this at the hearing of an RM100 million suit filed by Altantuya’s father, Dr Shaariibuu Setev Shaariibuu and his family against former policemen Azilah Hadri and Sirul Azhar Umar, as well as Abdul Razak and the Malaysian government.

To a question from counsel Sangeet Kaur Deo, who represented Altantuya’s family, the witness said Inspector Zamilah Mamat had been assigned as the investigating officer to investigate the police report, but he did not get the opportunity to record a statement from the late Altantuya.

Tonny, who is currently working in the Bukit Aman Prosecution and Legal Division, said it was important for an investigation to be carried out into the police report, as it was lodged by the deceased herself, and was directly related to her disappearance.

“Although I am not the investigating officer for the report, I will still take the report into consideration because it is directly related to my investigation, especially with regard to Namiraa Gerelmaa’s (she) report on the disappearance of her friend (Altantuya),” he said.

According to Tonny, the contents of Namiraa’s police report stated that on Oct 19, 2006, at 7pm, while she and Altantuya were at a hotel, Altantuya had received a phone call from a man telling Altantuya that her husband had asked him to escort her to a house in Damansara Heights.

“At about 8pm, Altantuya called Namiraa and stated that she had arrived at the house of her husband named ‘Abdul Razak Abdullah Baginda’.

“Namiraa stated that she had tried to contact her friend, but failed. She lodged a police report for fear of her friend’s safety,” he said.

Tonny said that based on the investigation and the contents of the police report, DSP Gan had instructed ASP Lim Meng Seah to arrest Abdul Razak, and the latter was then arrested on Nov 7, 2006.

Meanwhile, Tonny said Abdul Razak had also lodged a police report on Oct 23, 2006, regarding threats by Altantuya – also known as Amina – on Oct 17, as well as a report on harassment by a man and two foreign women, made on Oct 20 the same year.

Asked by Sangeet whether the witness knew why the police report was made seven days after Altantuya went to Abdul Razak’s house on Oct 17, Tony replied he did not know why the report by Abdul Razak was made late, and he was not given an explanation on the matter.

On June 4, 2007, Altantuya’s parents, Dr Shaariibuu and Altantsetseg Sanjaa as well as their two grandsons Mungunshagai Bayarjargal and Altanshagai Munkhtulga filed an RM100 million suit against former policemen Azilah Hadri and Sirul Azhar Umar, as well as Abdul Razak and the Malaysian government.

However, Altanshagai Munkhtulga’s name was later removed from the plaintiff’s list when he passed away in 2017.

In a statement of claim, the family claimed Altantuya’s death resulted in them suffering mental shock and psychological trauma, and sought compensation as well as exemplary and aggravated damages.