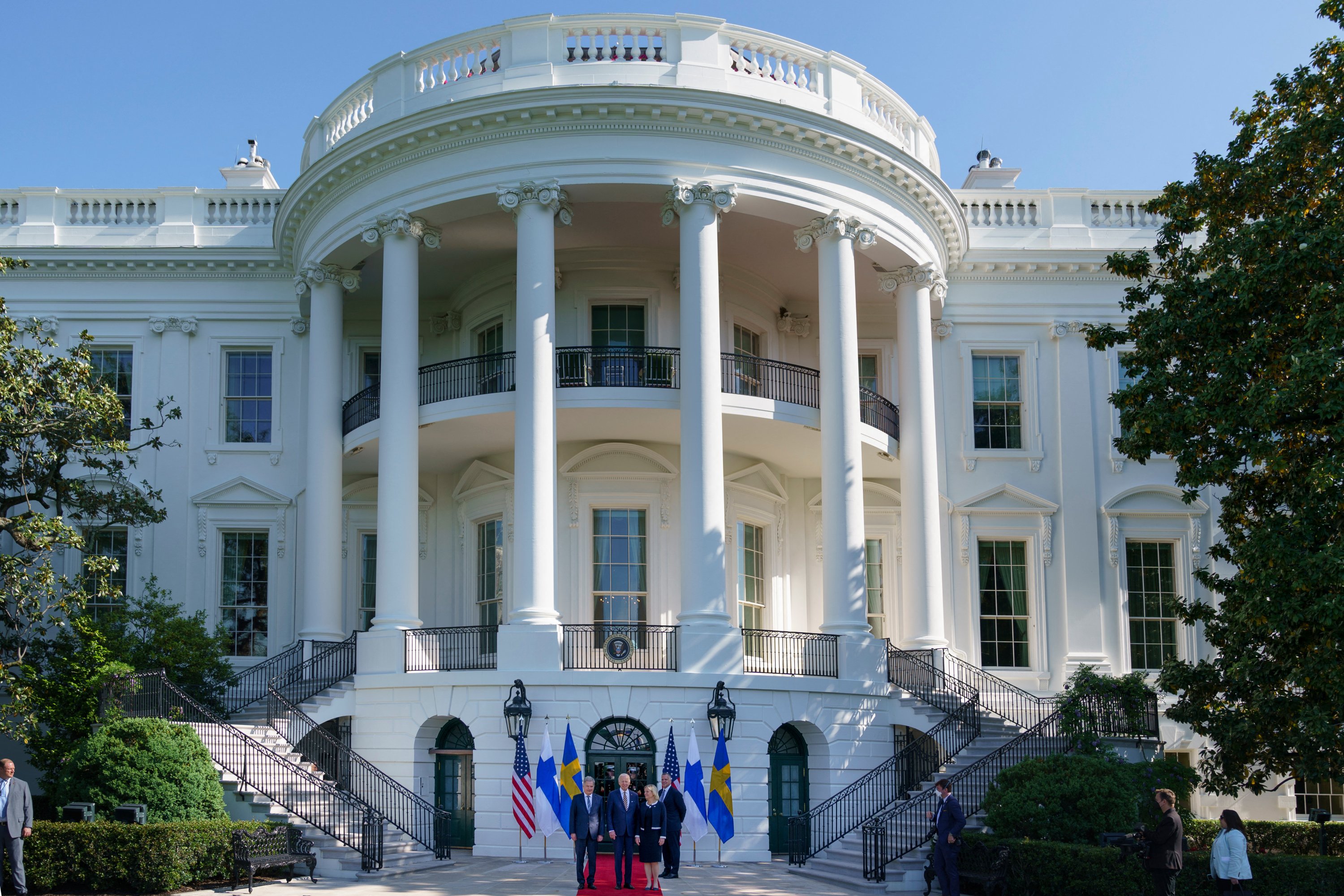 Biden (centre) poses with Finnish President Sauli Niinisto (left) and Swedish Prime Minister Magdalena Andersson upon their arrival to the White House in Washington, DC, on May 19, 2022. — AFP photo

ABOARD AIR FORCE ONE (May 20): President Joe Biden left Thursday for South Korea and Japan to cement US leadership in Asia at a time when the White House’s attention has been pulled back to Russia and Europe — and amid fears of a North Korean nuclear test during his trip.

Biden wants the trip to build on recent moves accelerating a years-long US pivot to Asia, where rising Chinese commercial and military power is undercutting Washington’s dominance.

But highlighting competing demands from Europe, Biden met right before his departure with the leaders of Finland and Sweden to celebrate their applications for joining Nato — a seismic development sparked by Russia’s invasion of Ukraine.

In another sign of growing US involvement in the conflict, the White House said Biden would put his signature while in Asia on a massive, US$40 billion Ukraine weapons and aid package passed Thursday by Congress.

A separate crisis awaits Biden on arrival, however — jitters that North Korea’s unpredictable leadership will choose his trip as the moment to test a nuclear capable missile or even a test nuclear explosion.

Despite a spiraling Covid outbreak, Pyongyang’s “preparations for a nuclear test have been completed and they are only looking for the right time,” South Korean lawmaker Ha Tae-keung said after being briefed by Seoul’s spy agency.

Sullivan said there was “real risk of some kind of provocation while we’re in the region, whether in South Korea or Japan.”

“We know what we will do to respond to them. We have communicated with not just our allies, but also with China,” he said.

Biden heads to Japan from South Korea on Sunday. He will hold talks with the leaders of both countries, as well as joining a regional summit of the Quad — a grouping of Australia, India, Japan and the United States — while in Tokyo.

During the first leg, he will visit US and South Korean troops, but will not make the traditional presidential trek to the fortified frontier known as the DMZ between South and North Korea, the White House said.

Hours ahead of Biden arriving, South Korea’s newly elected, strongly pro-US President Yoon Suk-yeol signaled a warm welcome, tweeting: “A mountain shows its way to the summit to those who seek it. I am confident the ROK-US alliance that seeks to uphold the values of democracy and human rights shall only elevate in the future.”

Sullivan said ahead of the trip that Biden is bound for Asia with “the wind at our back” after successful US leadership in the Western response to President Vladimir Putin’s now almost three-month-long invasion of Ukraine.

The high military, diplomatic and economic cost imposed on Russia is seen in Washington as a cautionary tale for China, given Beijing’s stated ambitions to gain control over democratic-ruled Taiwan, even if that means going to war.

“I think they’ve been struck by the way in which particularly the transatlantic alliance has come together to impose economic costs on Russia as a result of that aggression,” he said.

Sullivan said the administration wants not so much to confront China on the trip as to use Biden’s diplomacy to show that the West and its Asian partners will not be divided and weakened.

He pointed to cooperation from South Korea and Japan, among others, in the sanctions regime against Russia led by European powers and the United States. He also referred to Britain’s role in the recently created security partnership AUKUS.

This “powerful message” will be “heard in Beijing,” Sullivan said, “but it’s not a negative message and it’s not targeted at any one country.”

Sullivan said the United States is braced for North Korea to again defy UN sanctions by conducting a nuclear test.

If that happens, the US response will be coordinated with South Korea and Japan, Sullivan said, adding that Washington had been in touch with Beijing as well.

This could include trigger “adjustments to the way that our military is postured in the region,” Sullivan said.

But he denied that a North Korean nuclear test would be seen as a setback for Biden’s diplomacy.

“It would underscore one of the main messages that we are sending on this trip, which is that the United States is here for our allies and partners.” — AFP