Tuesday, August 9
You are at:Home»News»Sarawak»Kuching Waterfront CCTV to be upgraded after foamy fountain incident 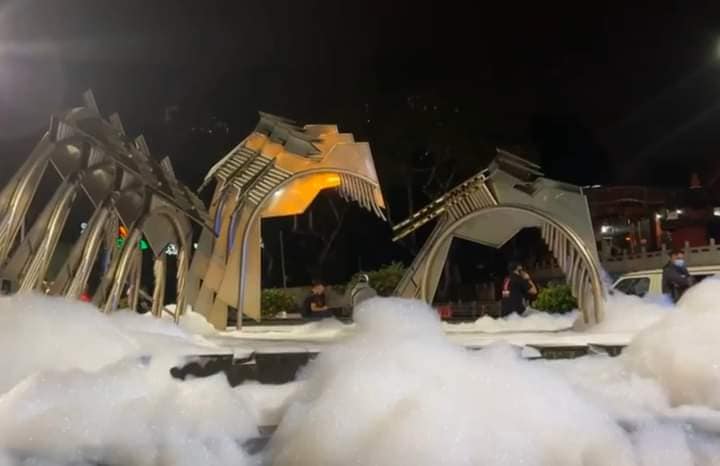 Photo showing the state of the Hornbill Fountain after the detergent was poured into it. — Photo from Facebook/Amazing Sarawak

KUCHING (May 20): A higher resolution closed circuit television camera (CCTV) will be installed at the Kuching Waterfront to better fight vandalism after detergent was poured into its Hornbill Fountain recently.

Utility and Telecommunication Deputy Minister II, Datuk Dr Abdul Rahman Junaidi, who is in-charge of the Kuching North City Commission (DBKU), said he had discussed the upgrading of the surveillance equipment with the Sarawak Multimedia Authority.

He conceded that the resolution of the current CCTV camera was quite low, making it difficult to identify wrongdoers.

“This (higher resolution camera) is to ensure that we can identify the suspects involved in any form of vandalism at the location,” he told a press conference today.

Dr Abdul Rahman added that higher resolution CCTV will be installed at other vandalism hotspots in DBKU’s jurisdictions.

Asked if any arrest had been made in connection with the vandalism of the water fountain on May 12, he said the police were still trying to trace the suspects.

On the possible motive behind the act, Dr Abdul Rahman said it is believed that the suspects might have just been trying to copy a trend in big cities in other countries.

“We take the act of vandalism of the hornbill fountain very seriously because the detergent can corrode equipment of the fountain and damage it,” he said.

Kuching police chief ASP Ashmon Bajah said the suspects are both male aged above 35, and one of them is believed to be a non-Sarawakian.

He said two police reports were made in relation to the case.

“After receiving the police report we formed an investigation team with DBKU. Now, we are still hunting for them. Give us time. We do our best,” he said.

The perpetrators are said to have purposely and mischievously poured detergent into the water fountain to make it foamy.

The aftermath of the incident went viral on social media, with images of the fountain overflowing with foam caused by the detergent powder.

An empty detergent packet was said to have been found beside a rubbish bin near the fountain.

The Hornbill Fountain, which is near the Chinese History Museum, is one of the famous landmarks at the Kuching Waterfront. The stainless steel sculpture depicts a trio of flying hornbills over a pond.

Previous ArticleHunt on for killer croc in Lundu, says district officer
Next Article Livestock industry suffering due to lack of access to affordable palm kernel cake