Wednesday, July 6
You are at:Home»News»Crime»MMEA arrest fishing boat in Bintulu for encroachment, vandalism and theft 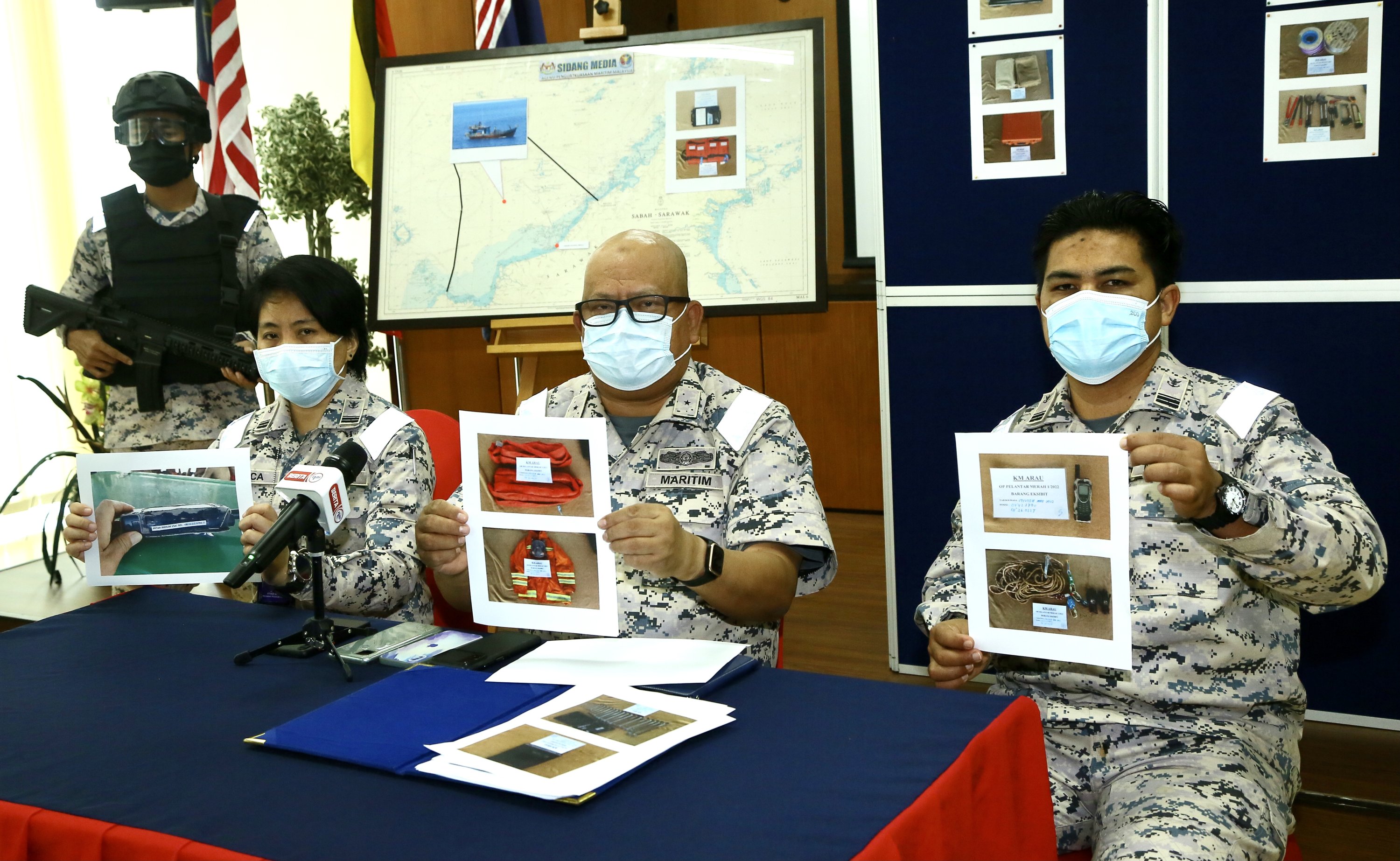 Zin Azman (centre) along with Jesica (left) and Nor (right) holding up pictures of the stolen items from the unmanned oil platform. — Photo by Muhamad Rais Sanusi

KUCHING (May 21): The Malaysian Maritime Enforcement Agency (MMEA) on Thursday arrested and detained a fishing boat for encroachment, vandalism and theft after giving chase to the boat crew.

The fishing boat, with a crew of seven, was caught trespassing, vandalising and stealing several items from an unmanned oil platform within Bintulu waters and was seized following several complaints from the local maritime community.

According to MMEA Sarawak director First Admiral Zin Azman Md Yunus, the operation began at around 10.30am with them giving chase to the vessel as they fled form the scene prior to being asked to stop for inspection. 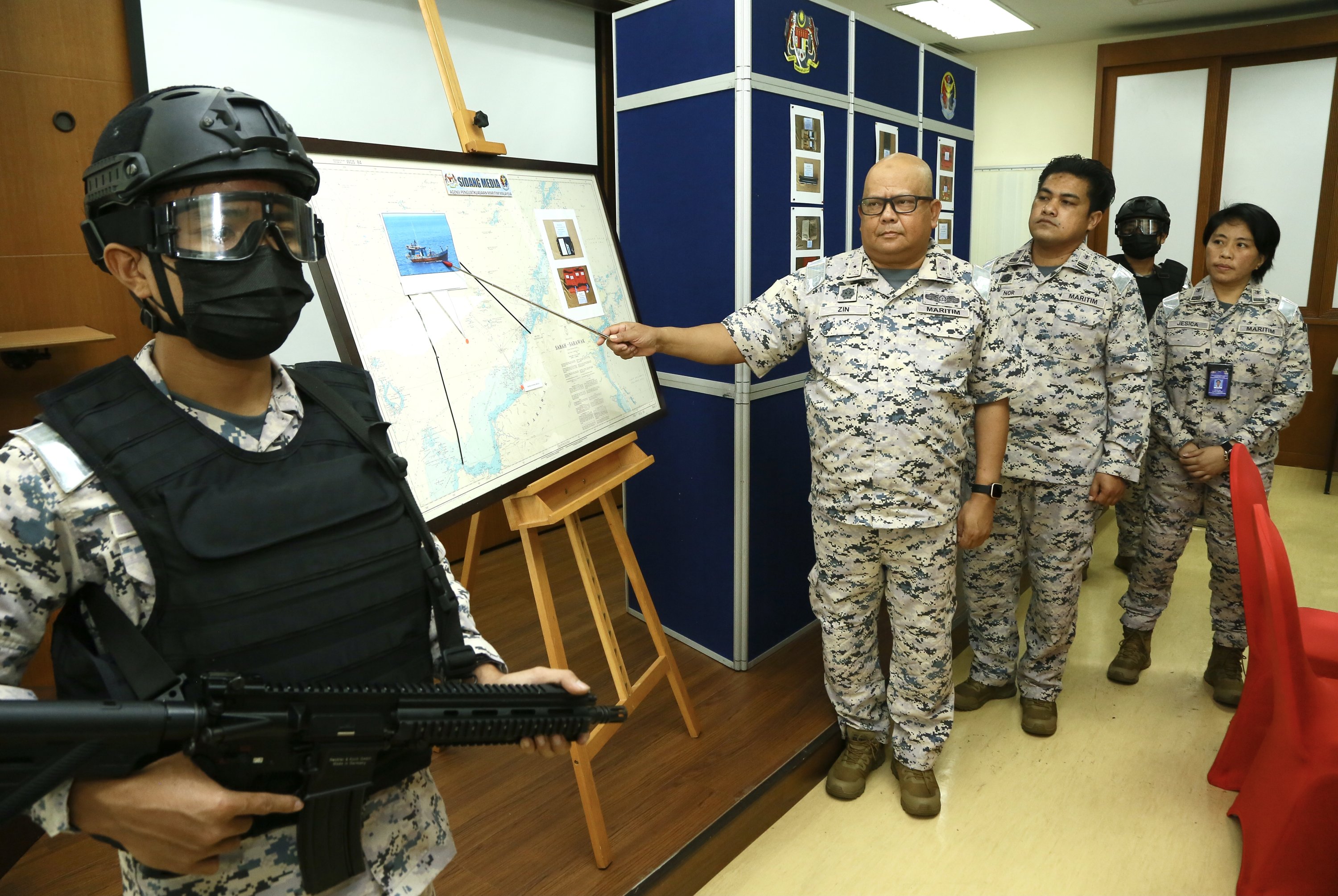 Zin Azman pointing towards the picture of the unregistered vessel manned by the foreign crew of seven. — Photo by Muhamad Rais Sanusi

“The crew of seven was detained by enforcement officers at 12.05pm under Ops Pelantar Merah 1/2022,” he said in a press conference at the Tun Abang Salahuddin Maritime Complex today.

Zin Azman said the case will be investigated under Section 378 of the Penal Code for theft as well as under the Protected Areas and Protected Places Act 1959 (Act 298) for trespassing on an unmanned oil platform that has been gazetted as a restricted area.

Based on the results of the investigation and inspection, the fishing boat’s crew, all foreigners aged between 22 to 40 years old and were suspected to hail from a neighbouring country.

Among the items stolen by them were safety jackets, power cables, satellite phones, overalls, blanket, radio and some of the equipment on the oil platform had been vandalised.

“The crew and vessel along with the stolen items were handed over to the Bintulu Maritime Zone Vessel Detention Centre for further investigation,” said Zin Azman.

Regarding the likelihood of potential intrusions on unmanned oil platforms in the future, he said MMEa and other marine safety agencies will continue to ramp up their efforts to improve maritime security, including the frequency of patrols and measures.

“MMEA will not compromise with any local or foreign parties when it comes to a crime to ensure the prosperity and safety of national waters as well as the rapid economic development through the maritime sector,” he said.

Ops Pelantar Merah 1/2022 was launched to lower the frequency of criminal activities and the intrusion of foreign fishing boats on unmanned platform areas especially within the east coast of Peninsula and Sarawak.

MMEA welcomes any information from the community pertaining to suspicious activities or maritime accidents via their landline MERS 999 or the Maritime Sarawak Operation Centre at 082-432544.