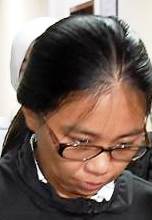 KOTA KINABALU (May 23): The Court of Appeal here on Monday affirmed the conviction and sentences of a motorist for causing the death of three men and a juvenile, and injuring another man while driving under the influence of alcohol in Tawau four years ago.

The High Court had on that day affirmed the lower court’s verdict for the appellant’s conviction. However, on her sentence, the High Court had reduced the jail sentence from 10 years for the first count to eight years and for the second count, from seven years to six years.

Both the jail sentences were ordered to run from consecutively to concurrently.

The sentence of fine and order to disqualify from holding any driving license made by the lower court were maintained.

The 38-year-old appellant, who was a company executive and former candidate for the 2013 general election, managed to obtain a stay of her execution at the High Court pending her appeal on Monday.

At the lower court, the Traffic Court had sentenced the appellant to a total of 17 years jail plus RM20,000 and RM19,000 fines, both in default, six months’ imprisonment respectively after finding her guilty of the two charges on April 30, 2019.

The lower court also ordered for disqualification from holding any driving license for five years for each of the charges.

On the first count, the appellant was found guilty of causing the death of three men and a juvenile aged between 16 to 30 at Jalan Chong Thien Vun in front of a premises in Tawau on July 8, 2018.

On the second count, she was found guilty of causing hurt to a man aged 21 at the same time and place.
The appellant had committed the offences while she was intoxicated with 171mg of ethyl alcohol in 100ml of her blood.

The permitted level set under the law is 80mg in 100ml blood.

Soon after the court delivered its decision, the appellant was seen crying and when escorted to the courtroom’s lockup, she couldn’t hold her tears and was heard saying something but it was not clear what it was.