Tuesday, February 7
You are at:Home»News»Sabah»EU envoy to correct misconception on palm oil industry
For the freshest news, join The Borneo Post's Telegram Channel and The Borneo Post on Newswav. 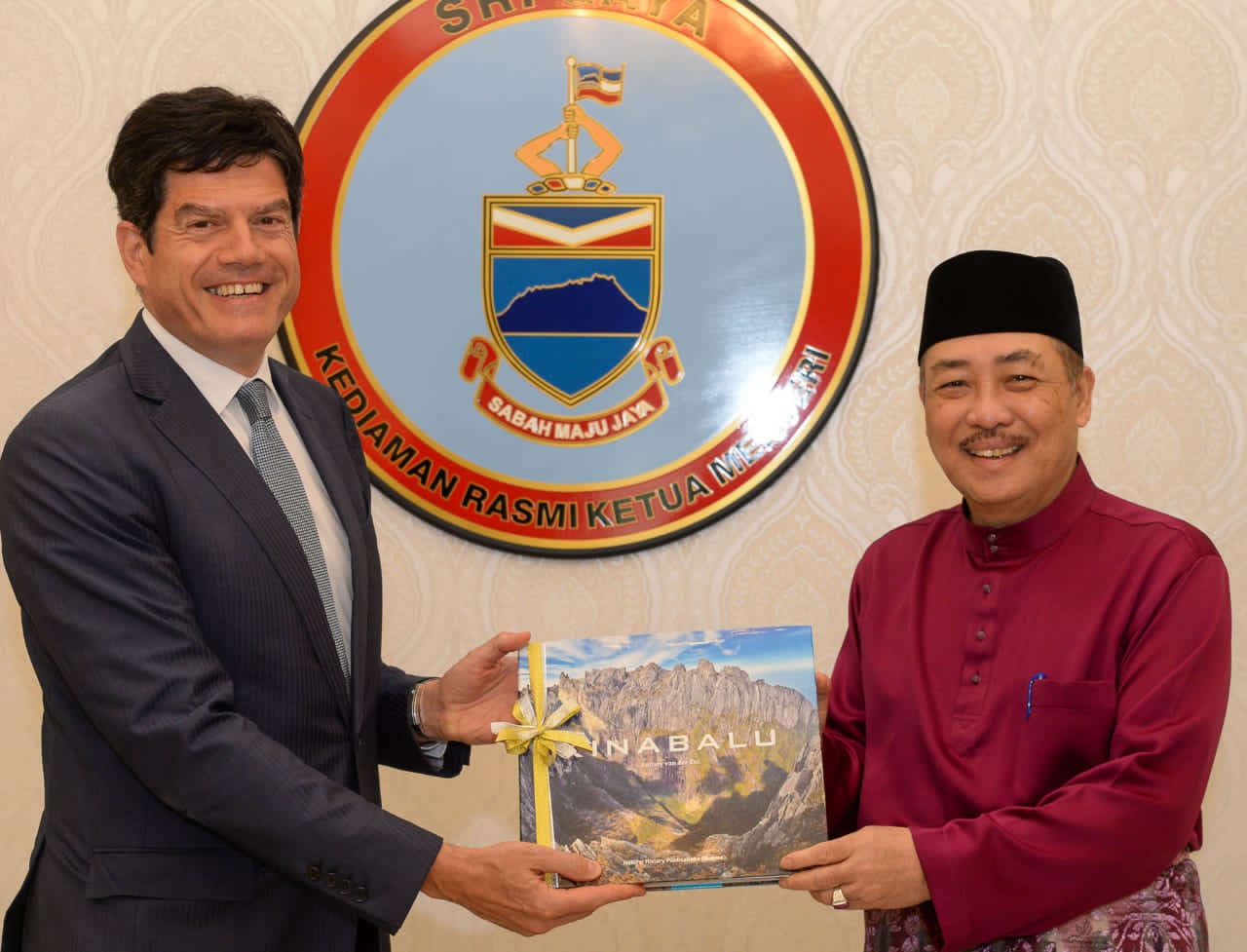 Hajiji presenting a coffee table book on Mt Kinabalu to EU Ambassador to Malaysia, Michalis Rochas after the courtesy call at Sri Gaya on Tuesday.

Hajiji said Sabah has all this while been promoting sustainable practice in oil palm cultivation contrary to what the EU anti-palm oil lobbies have been spreading negatively and widely.

Meeting with Rochas and his delegation at Sri Gaya here Tuesday, the Chief Minister welcomed the ambassador’s commitment to highlighting Sabah’s development priority in agriculture, industrial and tourism as well as the energy sector to the EU.

Hajiji appreciated that Sabah’s total trade with the EU was about RM4.2 billion (RM3.3 billion in export and RM800 million in imports).

“EU is an important trading partner. We want to see more investments and increased trade with the EU,” he said.
Hajiji added the State Government is keen to forge greater partnership with the EU to tackle environmental issues and welcomed the EU’s offer of support and expertise in this area.

The Chief Minister said Sabah has done much to meet the national commitment of maintaining 50 percent under forest cover and ensuring 52 percent of the state’s forest as permanent forest reserves, parks and wildlife conservation areas.

Meanwhile, Rochas agreed that there has always been a misconception about palm oil among the EU countries and that it needed to be corrected.

During his stay here, Rochas had also visited Sawit Kinabalu’s oil palm plantation among others where he saw the good work done on environmental conservation by the State Government.

“I have seen it myself and it (conservation efforts) is very commendable. I was thrilled to see for myself an Orang Utan and its baby although only from afar,” he said adding that an air survey also showed many orangutan nests atop the trees indicating all is well for the wildlife.

“But, the EU doesn’t know about this yet. We need to go back and give the true impression of the situation in Sabah.

“I will convey this to Brussels (EU headquarters),” he said.

“I want to correct and enhance the view on the oil palm industry in Malaysia,” he assured the Chief Minister.

“Your forest is an asset, a world heritage and that is why we care about it,” he said while praising the State Government for the immense effort to protect Sabah’s forest.

Rochas also offered assistance on biodiversity conservation with EU funding to the State
Government as well as improving collaboration between the EU and Sabah through technical support and expertise.

“Malaysia is an important country to EU. About 40 per cent of EU trade is in Malaysia.

There is much to explore in Sabah,” he said, adding that he looks forward to enhancing partnership in view of the wealth of potential partnerships in trade and
conservation efforts.

Rochas had also invited NGOs such as WWF-Malaysia, Blu Hope and Stop Fish Bombing Malaysia to share the status of their projects, all partially or wholly sponsored by the EU.

Blu Hope founder/CEO Simon Christopher on the other hand briefed Hajiji on its efforts to make Sabah a plastic neutral state through different recycling technologies that give monetary value to plastic wastes.