Thursday, August 11
You are at:Home»News»Sabah»MPPS conference to be institutionalized as annual event – CM 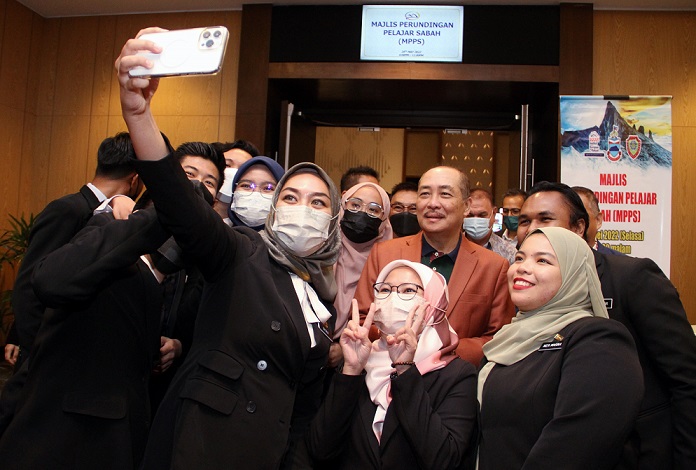 Hajiji took a photo with the students after the conference.

KOTA KINABALU (May 25): The Sabah Students Consultative Council (MPPS) Conference will be institutionalized as an annual event to listen to the voices of the people, especially youngsters and students, said Chief Minister Datuk Seri Panglima Hajiji Noor.

Besides that, he said all motions tabled at the conference should be officially documented in the form of Cabinet note to be presented to the State Cabinet, and subsequently scrutinized by the relevant ministries and agencies.

“After listening to the motions in the inaugural conference, I want MPPS to be made an annual event.
“I want to hear proposals and views from young people, particularly those who are still studying in higher learning institutions (IPT) nationwide.

“I will take serious attention on every motion or proposal presented by the young people and we will look into them thoroughly to be included in government’s planning.

“Any proposal that is implemented will be expedited,” he said when officiating at the MPPS Conference held at Sabah International Convention Centre (SICC) here on Tuesday night.

He said the proposals under seven clusters tabled in the MPPS Conference are relevant to the development of the state and youth in Sabah.

The conference was announced by Hajiji in a breaking of fast event with Sabahan students in West Malaysia in April. The MPPS Conference will be institutionalized as an annual event and chaired by the Special Tasks Minister.

MPPS is an initiative by the Institut Kerjasama Kerajaan dan Rakyat (IKRAR), Sabah Special Tasks Minister Office as well as the Sabah Youth Council (MBS). More than 80 student leaders from 60 learning institutions nationwide attended the conference, including those from secondary schools in Sabah.

More than 10 proposals were presented under the seven clusters in MPPS, namely Youth, Sports and Recreation; Science, Technology and Innovation; Leadership and Human Capital Development; Youth Economics and Business; Education and Career; Environment and Green Sustainability; and Agriculture and Tourism.

Hajiji said the MPPS Conference is aligned with one of the main thrusts of the Sabah Maju Jaya (SMJ) roadmap, namely human capital development and people’s wellbeing.

“The State Government is committed to empowering human capital in the state through the implementation and planning of various programmes and initiatives to fulfil the aspirations of young people in Sabah.”

Apart from MPPS, he said the State Government has introduced the Sabah State Education Fund (TPNS) this year to assist more students to pursue their tertiary education.

“The State Government has also set up the Sabah Students Special Secretariat that is aimed at overseeing all Sabahan students’ associations in Peninsular Malaysia, Sarawak and Labuan.

“Issues pertaining to Sabahan students will be discussed and conveyed to the government for follow-up action through the special secretariat.”

Hajiji said there were many potential young people in Sabah after listening to the views aired by the students in MPPS.

Hence, he said the Sabah Government led by Gabungan Rakyat Sabah (GRS) and Barisan Nasional (BN) will focus on efforts to create a friendly environment to woo foreign investors.

“We want to bring in investors to Sabah to create more job opportunities to our youths.

“We do not want our university graduates to migrate to Peninsular due to the lack of job prospects here.”