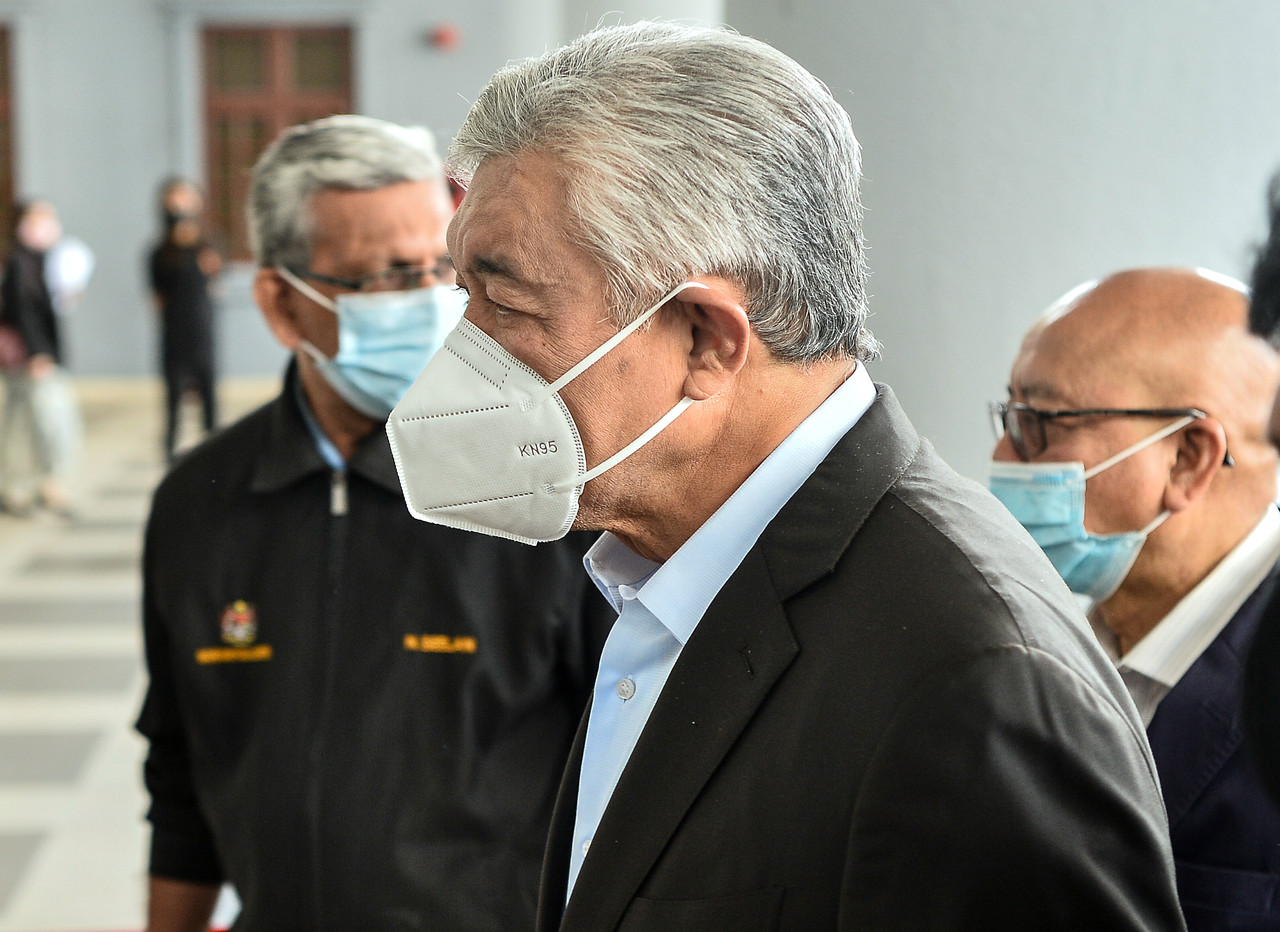 Insisting that the businessman had contributed the money for mosque-building, Ahmad Zahid told the High Court that he had no ties to public-listed firm MyEG Services Berhad. – Bernama photo

KUALA LUMPUR (May 25): Datuk Seri Ahmad Zahid Hamidi today denied having corruptly received RM13 million in 23 cheques in 2016 and 2017 from a businessman with a wealthy family background, insisting that he had never promised to award MyEG projects to this businessman.

Insisting that the businessman had contributed the money for mosque-building, Ahmad Zahid told the High Court that he had no ties to public-listed firm MyEG Services Berhad.

Ahmad Zahid was testifying in his own defence in his trial where he is facing 47 charges, including eight corruption charges where he is accused of having corruptly received RM21.25 million in cheques as a reward in his role as then home minister related to alleged contract awards or proposed assistance in obtaining contracts.

Ahmad Zahid noted that Junaith Asharab had previously told the court in this trial that he is from a “well-known family” and that his in-laws’ family was “filthy rich”.

“I was also told that Junaith Asharab is an Indian Muslim who comes from a very wealthy family where his means exceeds ordinary people’s means. I was also made to understand that he has a facility in ringgit to be contributed to whoever he wished.

“Furthermore, I was also informed that Junaith Asharab also contributed to the building of a mosque in India where the writings of 30 Juzuk (parts) of the al-Quran in that mosque are made from gold and the word “Bismillah” at the start of each surah (chapter) is made of diamonds,” Ahmad Zahid said.

Ahmad Zahid insisted today that the two corruption charges — where he was accused of having corruptly received the RM13 million by having it placed in law firm Lewis & Co’s account allegedly as inducement to help Mastoro Kenny to obtain MyEG projects under the Home Ministry’s purview — were “not true”.

Noting that the cheques totalling RM13 million were issued to and deposited in Lewis & Co’s account, Ahmad Zahid insisted that these were Junaith Asharab’s donation to “develop a mosque and a tahfiz school in the Bagan Datuk district”.

Ahmad Zahid, who is also Bagan Datuk MP, denied having offered to give out projects to Junaith Asharab in return for the RM13 million sum received.

“I state that I have never promised any MyEG projects to Junaith Asharab sebagai balasan (in return) for any donation given as MyEG is not under the Home Ministry’s purview, and this fact has also been confirmed by Junaith Asharab when he testified in court,” he said firmly.

Ahmad Zahid claimed that the prosecution had failed to present any evidence in court that could show that he had promised MyEG projects to Junaith Asharab, stressing that the businessman had also told the court previously that the RM13 million cheques were to build a mosque and a tahfiz school in Bagan Datuk.

Asked by his lawyer Datuk Ahmad Zaidi Zainal which ministry that MyEG came under, Ahmad Zahid replied: “This company has got nothing to do with me personally or officially, but as far as I know, MyEG has been awarded contract by the Ministry of Finance.”

In this trial, Ahmad Zahid — who is also former deputy prime minister and the current Umno president — is facing 47 charges, namely 12 counts of criminal breach of trust in relation to charitable organisation Yayasan Akalbudi’s funds, 27 counts of money-laundering, and eight counts of bribery charges.