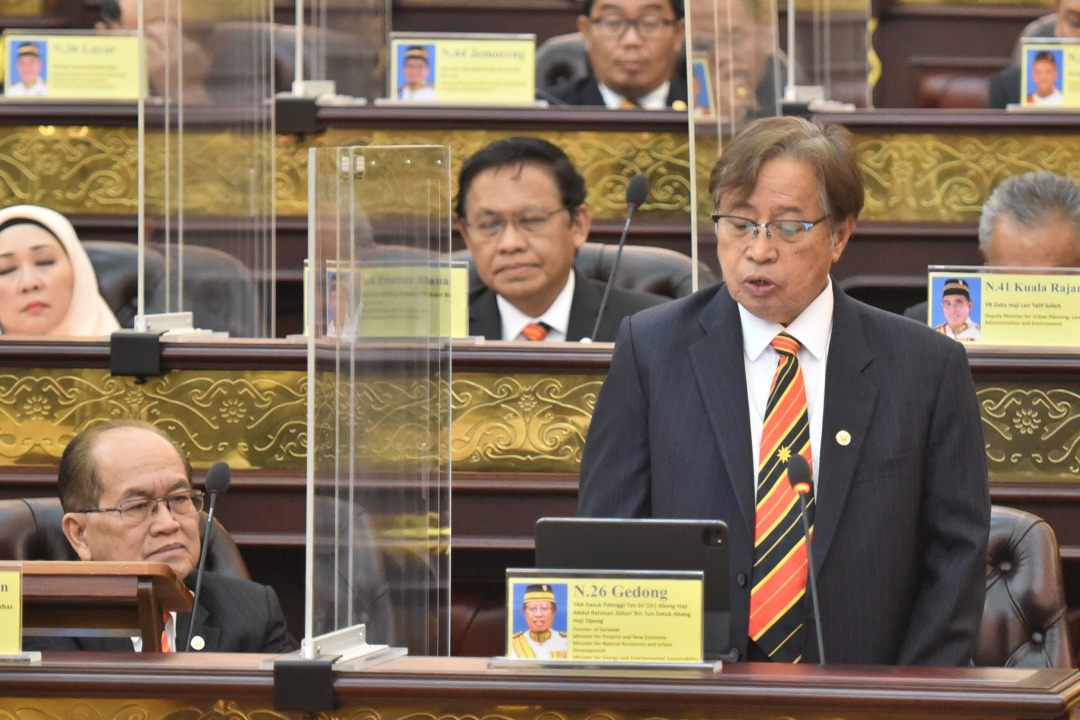 The Premier yesterday expressed confidence that the Gabungan Parti Sarawak (GPS) government will be able to take this leap of faith in achieving the target and Sarawak’s aspiration through a new economic model.

“Although to some, the target is high, I am certain with new growth areas and promising prospects, the six to eight per cent growth per annum is achievable,” he said when delivering his winding up speech in the august House yesterday.

Abang Johari said the Sarawak government was glad to have formulated the PCDS 2030, which is now being implemented.

He said the PCDS 2030 is to address reforms of Sarawak’s economy as it moves towards a high income and developed state by 2030.

He said economies around the world had experienced immense stress for the past two years.

“Covid-19 pandemic took the world by surprise and affected the healthcare system, and has also brought many economies into recession. We know, Sarawak shared the same experience.

“Throughout this challenging journey, we have seen how economies shift away from the usual way of doing things prior to Covid-19 and quickly made adjustments to new methods to unlock new growth prospects.

“We are grateful to see a brighter outlook with recovery in progress and businesses start to operate near to normal with Sarawak transitioning to the endemic phase as we enter the year 2022,” he said.

Despite so, he said the GPS government was mindful that while the pandemic induced crisis subsided, the geopolitical tensions with Russia’s invasion of Ukraine had led to greater uncertainty that carried a huge threat to the fragile global economic recovery process.

“We are aware that Sarawak’s current economic model is easily influenced by the fluctuation of commodity prices, particularly crude palm oil, oil and gas. Based on the past trend, our economy is concentrated on these primary commodities as our main sources of revenue.

“Thus, to emerge as a stronger region, we must embark on a full-fledged transformation and capitalise on mega-trends around the world. Our focus is on restructuring and diversifying our economy into high value downstream industry.”

Abang Johari said Sarawak had to be innovative, productive and resilient, in the global business environment that is dynamic and volatile.

With a small domestic market, he said the state needed to scale up productions and develop more export-oriented activities while ensuring a clean and healthy environment through adoption of innovation and digitalisation to spur productivity growth.

He believed that this would broaden Sarawak’s economic supply chain.

“Sarawak’s economy will be more sustainable to shocks in spite of the many unprecedented crisis that may arise in the future. It will also create more high paying jobs and entrepreneurship opportunities as well as generate more private sector investments.

“The spillover from all these new economic activities will translate to produce higher household income. This is important because we want to ensure our economic prosperity is equitably distributed and shared by the people,” he said.

Abang Johari said the GPS government’s top priority now is to build both physical and digital infrastructure to increase efficiency and link Sarawak to the global market.

“This will become the platform for Sarawak’s economy to grow in the coming years, and create a thriving society that enjoys economic prosperity, social inclusivity and sustainable environment.”